Love Me Some Doggies!

One of my favorite events each year is the Westminster Dog Show in NYC! So fun to see the different breed of dogs and hear their stories and where they are from.

Last night Brad, Buddy and I all watched together. Budster was too cute. Sitting, staring at the dogs.
Isn't it interesting how they do that? Only when animals are on TV though. (Even though he has been caught running for the door when a door bell on TV rings)

Last night was awesome because the Scottish Deerhound that won Best in Show is from Brad's hometown of Warrenton, Virginia!
When they announced it during the first showing of dogs, Brad turned it up and said.. 'Really? Warrenton??'

Then 'Hickory' the Deerhound WON the whole thing! Brad immediately listened for the owner's names to see if he knew them. He doesn't.

The other cool part about Hickory winning? It's the first time a Scottish Deerhound has ever won Best in Show!
Love that sometimes, it's not the prissy breeds that win it all. Sorry Sass. I know Josie is a prissy. 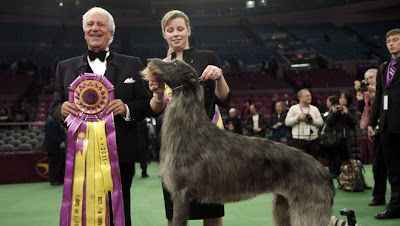 Just like in 2008 when Uno the beagle, from the Carolinas, won! As a beagle owner, I felt proud! Proud that beagles finally got their day in the spotlight despite their less prissy look. If you recall, Uno was a ham too! Howling!! Barking!! Awesome!! 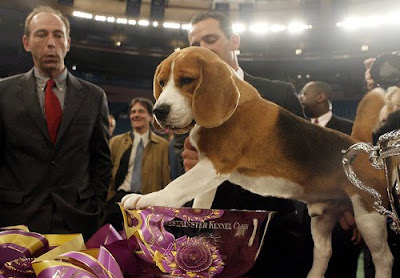 They actually did a follow up piece on him last night showing Uno prancing around the ranch he lives on.
I want to be Uno's friend. I want Buddy and him to be friends. Yes, I'm a TOTAL nerd. That's all I have for today.
Happy Humpday!

That Beagle is really cute!!! He looks like a puppy...

Uno is cute! My aunt commented on FB because a Newfoundland won best in show and she has two. Actually they have their own FB page just like Meow Meow!

It's freaking too cute how much of a dog lover you are! My dad's girlfriend is too, she loves that stuff!

That pups is super adorable. I want a golden retriever SOOOO badly I can't stand it.

My dogs would majorly fail in a dog show.

Blair growls whenever she sees any animal on TV, especially dogs! There is NO WAY we'd be able to watch a dog show. I had the news on this morning and she went nuts when they showed a picture of the winning dog. This behaviour of hers is pretty funny actually but it has become a little annoying.

Millie and I used to leave the TV on for our dog, Calvin, when we lived together. :)

One day the bulldogs will be in the spot light ... if they can stay awake that long :)

So neat that one from Brad's hometown won :)