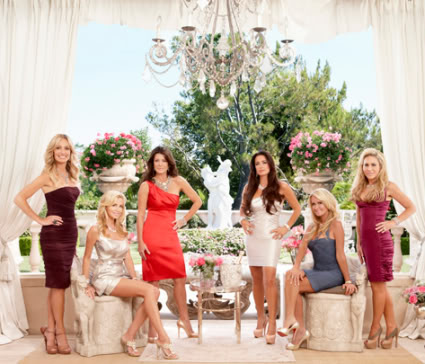 Most of you have probably heard about the death of Russell Armstrong, the estranged husband of The Real Housewives of Beverly Hills cast mate, Taylor Armstrong.
I'm not going to lie. I was shocked when I heard the news. It's just so sad especially when there are children left behind.
What I was not so shocked to hear about is the fact that Russell and Taylor were spending money they didn't even have to 'keep up with the joneses'.
They did so in order to keep the persona that they were filthy rich, in order to be a member of the Housewives cast.
60K for a child's fourth birthday party? Now we're finding out they were blowing through all their savings and them some to pay for such a thing?
Word is -- Russell left behind nearly $10-million in debt.
It's just so sad!
While I love to watch the Housewives franchise on Bravo, I'm sickened at what some of these reality stars are doing in order to stay on these shows and in the limelight.
For Example:
Lynne Curtin - OC Housewives: I actually tweeted(I'm @DeNanner in case you're interested) her earlier about how I'm sure her husband can relate to what Russell was going through. If you recall, Lynne's husband allowed her and their daughter to get plastic surgery knowing they couldn't pay the rent on their house.
The season ended with them being evicted and Lynne and her husband being 'outed', that they were not in fact wealthy. They were dropped from the cast.
Teresa Guidice - NJ Housewives: She and her hubby spent..spent..spent themselves into bankruptcy. I think it got worse when they too, joined the show.
NeNe Leakes - Atlanta Housewives: We know about their money and marital problems. I've also heard that Bravo pays their monthly rent for the mansion they live in so it appears they are 'Atlanta socialites'. I'm assuming they do this because they know NeNe and her drama bring ratings.
I could go on and on about different examples when it comes to this. While I'm not a fan of Gretchen from the OC Housewives, you have to admit, she lives modestly and within her means in comparison to the rest of her bunch.
The whole point of this post is to bring to light out how networks such as Bravo and others, exploit people for ratings not giving a crap about what happens to them down the road.
I don't agree with some, that Russell killed himself because of the show, but I do think the drama of the show contributed.
I know these people sign up for this but don't you think there should be some sort of guidance given by the networks on how to deal with the fame and money?
I know the NFL does this for their incoming players.
They go through weeks of seminars on how to manage their money, be leery of gold-digging women and so forth.
Thoughts?

It's tragic. But I mean, $60k for a bday party? People with real money don't do crazy things like that with what they've earned.

You know I am so glad you posted this. I get so frustrated when I see people spending $$ or abusing $$ they do not have. My husband and I do not have credit cards, never have. We live by the philosophy..if you can't pay for it today, you won't be able to pay for it tomorrow. If he and I cannot pay cash for it. We don't buy it. Simple, right?!! You'd think. But so many take credit cards for granted. I have several friends swimming in credit card and student loan debt. Like, 50k plus and they are not even 30 years old. Could you imagine?!
I was at the bookstore today buying books for fall semester and I swear to you Dee, I was the only one who was actually paying for my books. The heifer in front of me got 4 books and supplies for 500+ all covered by financial aid. She walked outside and hopped into her lexus and drove off. I was fuming. What is wrong with this picture?!! People need to learn to live within their means.
So what happnens to Russell's debt?? I'd love to know.

It is so sad what has happened to all of these reality tv stars. I completely agree there should be a program to help them. It is ridiculous that they are so in debt just to stay on the show or to impress others.

However, when do we have to become accountable for our actions? I mean, these people are adults. Not sure it's fair to blame the networks who promote them - and help them earn more money - when they make poor decisions that lead to a financial mess.

I like Casey's response. While I don't think the explotation is good, these people are adults and are responsible to their actions. All in all it is just sad!

Reality television "stars" are put on the air to act outrageous which tv channels hope will draw an audience. This creates a vicious circle which probably helped contribute to that man's death. Maybe these people wouldn't act so crazy (and in turn have the problems they have) if it weren't for all the sad, shallow people who find these types of shows entertaining. Just my opinion.....

It really is a tragedy, but I agree with people living within their means. No one does that anymore, and to try to pretend to be something that you aren't eventually catches up with you.

When I heard about their money problems that bday party was the first thing that came to my mind! It's sad.

Thx for stopping by today. Be sure to tell Karen I said hi!

It's so sad to know that he left behind his daughter. Just like my son she'll have to live with all of the "why" questions. No matter what he was going through committing suicide is so selfish!

WEll, I do feel bad for Russell's family and all, but Over spending pisses me off. IN fact, I can’t STAND Teresa, due to their crazy spending habits, and then never paying their bills. You know who loses? The people they owe friggen money to! I bet a lot of people are out of money that helped build their big house and other small businesses are out the money due to their selfishness. And, IM sorry- but they STILL buy things they shouldn’t!! THEY don’t seem to have cut back to me!! THEY Should have to pay back every penny they owe with all her incoming money. I honestly have no patience for people like this. MY dad has lost a ton of money because of people filing for bankruptcy and never paying the bills they accrued at his SMALL business. IF YOU DON’T HAVE IT, DON’T SPEND IT! It is simple. My parents live this way and my husband lives this way- and in turn, I have been taught to live this way.
I guess they should be taught how to handle their money, but they are adults- they should know better. Also, you forgot Sonja Morgan from NYC- however, I think her bankruptcy was over a business?

Wow ... I just don't understand the "keeping up with the Joneses" mentality ... you are right, so very sad {both the debt that was incurred and the fact that they felt the need to spend money they didn't have to fill an insecurity ... I guess?}

Such sad news! My mother and I actually saw Russell about 3 weeks ago in Beverly Hills. He was at a newstand, and it was the day that People magazine came out with a story about them. It's so devestating now for the family. We'll see how Bravo handles the show.

Well, I hope you have a great weekend and stop by and visit me too on my blog, if you get a chance...I am following you now.

You know I don't watch "Housewives" and never have but the premise is so interesting on how some people live beyond their means when they could do with the pleasures of a simpler life. Nice to visit your blog once more and to see you're still keeping it up so beautifully.