If you've been following my blog long you'll know that I'm not a fan of baby showers. No big..I plan on having one too(but only for my first child).

Anyhoo.. I traveled up to West Virginia for my friend Kathleen's shower in her hometown.

This is her first child and she's not finding out the sex(drives me nutzo..I need to know now! lol)

It was a beautiful drive through the mountains to get there and the shower was lovely and full of family and friends.

Here's Mommy to be. Can you believe she's 26-weeks and she's still wearing a size 0 Lilly dress? 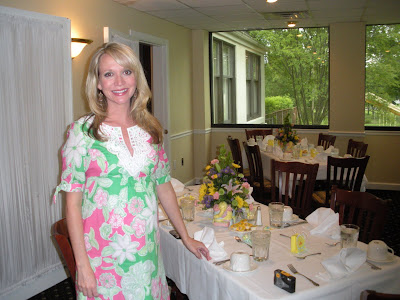 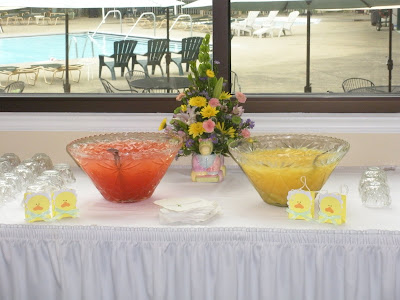 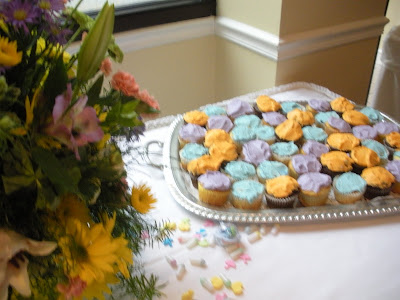 And.. this is the best part.
Kathleen picked out the lunch menu and even though it's not your 'typical' ladies lunch fare it is what the pregnant 'mommy' wanted and crazes. Meatloaf, mac n' cheese, hot chicken salad. Even Brad laughed when he heard what she had chosen.
Brad's actual quote? 'That's AWESOME!' 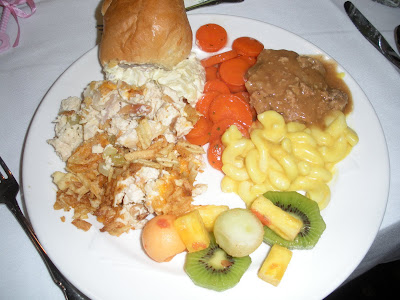 Here's a better shot of that dress I mentioned before. Fatty Magee that I am..and all.. Seriously, I need to lose at least 5-pounds ASAP! 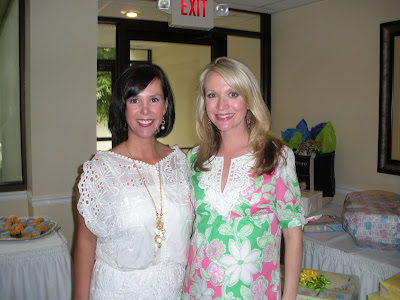 Me and Kathleen have similar sandals. Except her's are Jack Rogers and mine are Bonanno's. Wonder is the same company makes both? Doesn't seem to be much of a difference? 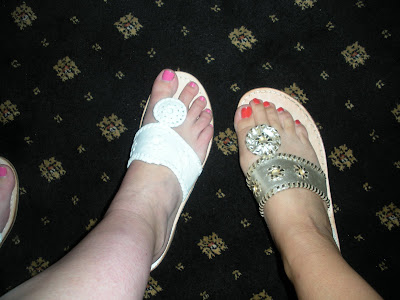 Of course, people came with their West VA baby gear! Kathleen is married to a Buckeye fan so the baby will surely get a lot of that at her Ohio baby shower. 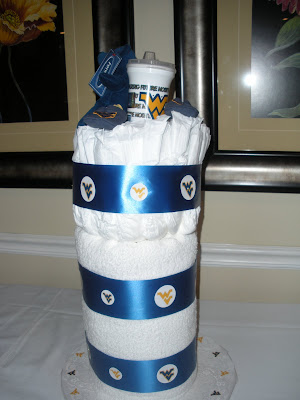 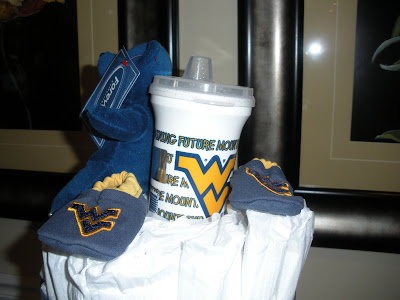 A funny point in the shower? When Kathleen's grandma gave her this paci holder. I have to admit -- I, like Kathleen, thought it was a dog collar at first too! 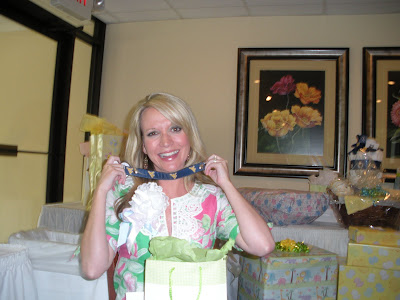 I didn't get a before shot of my gift but here's an after shot. Thanks to Sara for the idea! 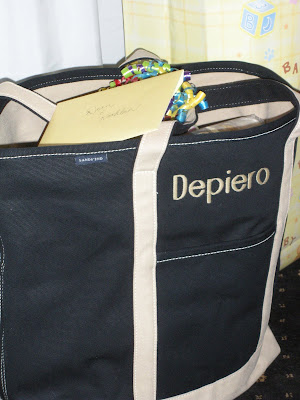 This was the coolest thing ever! Maybe I've been living under a rock but I've never seen someone make a doll out of diapers! 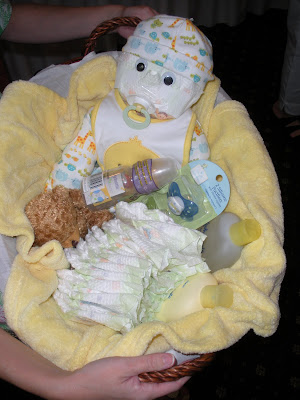 Kathleen with her Aunts, Mom and Grandma! 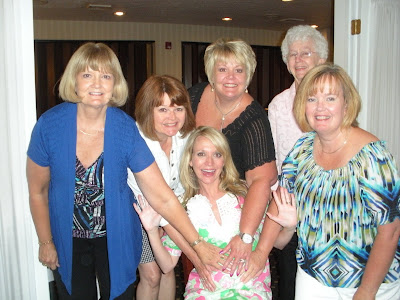 The 'Daddy to be' showed up at the end after 9-holes of golf. 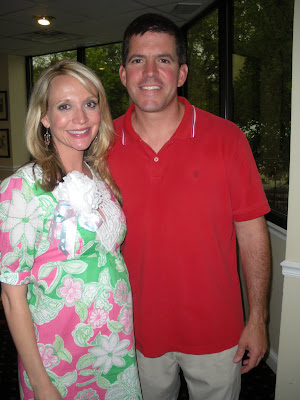 After the shower we headed back to her parents house. 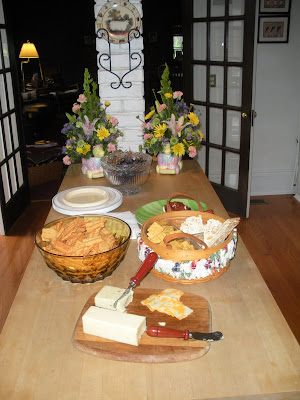 Where one of Kathleen's friends brought her breast pump to let her borrow. The demo was interesting to say the least. I declined on taking pictures and posting about that. 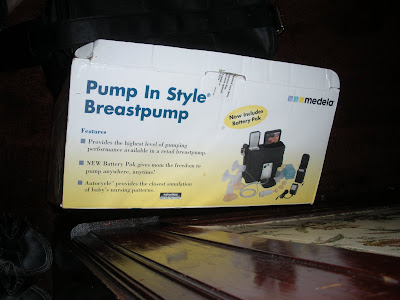 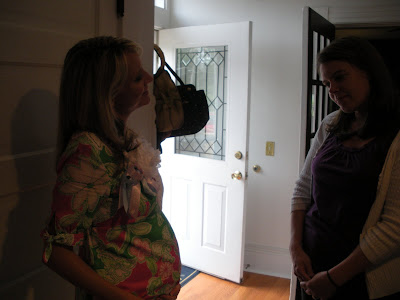 What a great weekend! Thanks to the Cochrane's for hosting me! 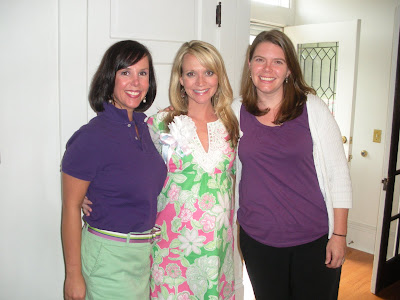 Hope you all had a great weekend too!

I've never seen a baby made out of diapers either! ha! That's pretty clever.

Loving the food at the shower! I hate shower food because I hate mayonaise. I would've loved the meatloaf and mac n' cheese. Good for her!!

Glad she liked the gift. You can't go wrong with it. Looks like a fun trip!

I can't see a lot of the pictures for some reason!
But, I am right there with you with my dislike for baby showers (and wedding)...they are just not fun!!! My BF's baby shower was a guy and girl cocktail party and it was a display shower! So much fun!!!

Little Match Girl said...
This comment has been removed by the author.
Monday, May 24, 2010

Mac and Cheese! I love it!

I am not a fan of baby showers because growing up it just isn't done in the Jewish community I am from. I guess that stuck with me...


And I just have to add (hence my deleted comment) you look fabulous!

How fun! Never seen the the diaper baby, either, and I've been to plenty of showers!

Quit calling yourself FAT! I won't have it, lady!

Looks like a fun shower! She is precious too... I was HUGE preggers!

Bumpkin on a Swing said...

Looks like fun - Kathleen looks beautiful! The bag turned out super cute - I have that exact same one and use it ALL the time!

looks like a great shower!! she is so adorable :)

looks like fun, for a baby shower! cant wait foryours!!