What happens to the Pooch when you have a Baby

He has been my 'baby' for years............
We have been through a lot together and he's always been there.
For goodness sake, for the longest time it was just me and him on our Christmas cards!
So, I was worried about what would happen when Shelby made her arrival.
I was afraid he would be jealous and leave his mark on her things and go into depression.
We had even planned to have him stay with my in-laws the first week Shelby was home but then we changed our mind.
He stayed and Brad brought one of Shelby's swaddle blankets home from the hospital prior to bring her home.
He took right to it.
I think he already knew what was going to happen because he became very clingy to me right before I delivered. 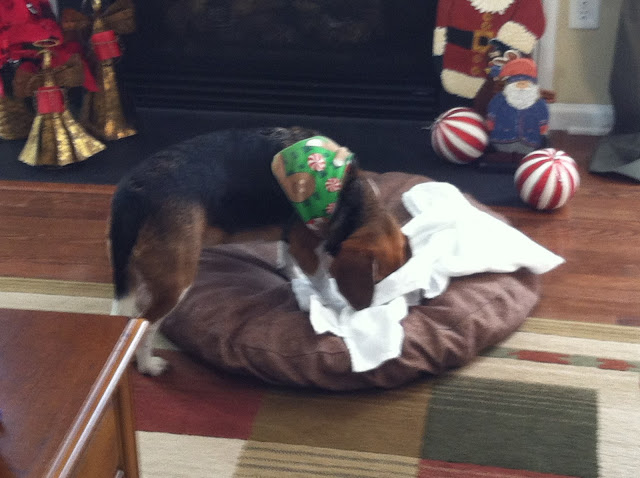 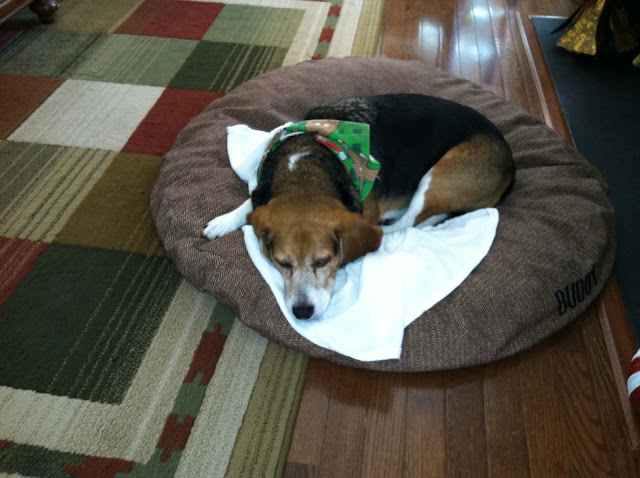 After we brought her home he was great with her and continues to be.
He does goes bonkers when people come to visit and pulls out all his toys so they will play with him and not Shelby but it's not that bad.
We still make a serious effort to give him lots of love and attention even though he's not 'top dog' anymore.
I don't feel any less love for him than I have before.
He's part of our family...
He even participates in story time.
:) 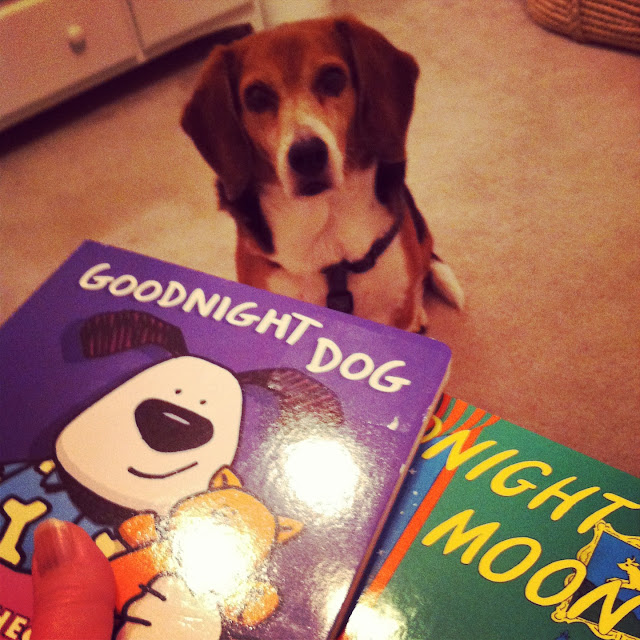 I decided to post about this when snuggling on the couch with him last night.
Buddy gets his special time after Shelby goes to bed around 7-7:30pm.
He knows it too.
He hops right up on the couch and expects rubs and love. 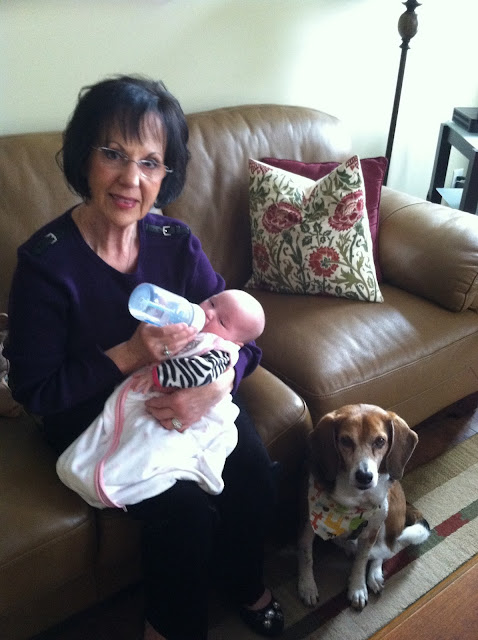 So, does the pooch become 'just a dog', after you have a baby?
I say no!!!!!!
I think they're always part of your family, at least that's what we have found.
He's just as important and special to us as he was before.
He just doesn't get as much playtime with us as he did before.
But he's adjusting.
Anyone else have a similar experience? 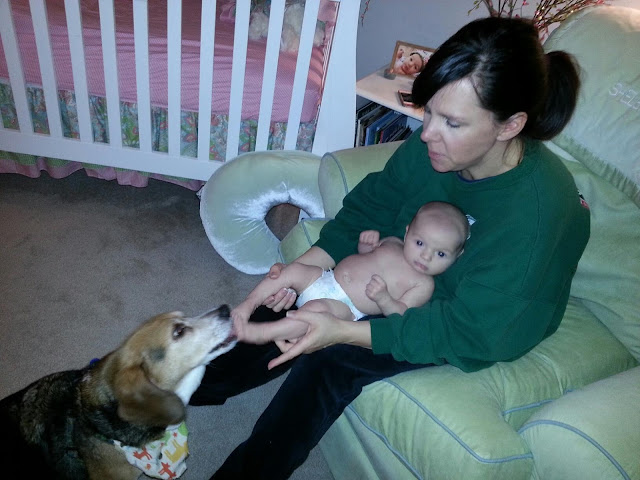 I agree! Jolie and Stella have been buddies since day one and we try to make our time for Jolie when Stella is sleeping. Plus she loves it when I'm working at home and can take her out during the day and play ball. Dogs are just as much a part of our family. Especially now that Stella is eating table food (and half of it ends up on the floor) Jolie loves her even more! haha! Shelby and Buddy are so cute! (PS to answer your question Stella has 5 bonnets and I want a seersucker one now - what's my problem?! haha!)

I love your dog!!!!! He's just too freaking adorable. Beagles are definitely family dogs and amazing with children. Never met a beagle who didn't love them to pieces.

Yeah for Buddy!! He has such a great family!!!

At first I thought this was going to be an exercise post on "how to loose the belly pooch after baby." You will have to write on that too some day. HAHA.

I cannot tell you how happy I am to hear that Buddy is not "just the dog" now. Our fur baby is really our first child together and I can't imagine how some new moms GIVE THEIR DOGS AWAY or neglect them. I could never, ever, ever do that to my sweet Charlie. You and Brad really do a great job of balancing your family! I love it. YAY Buddy!

I think it also depends on your dog. We had a black lab who was always so gentle and had obviously been with us since before we were even married. He was our baby. But, he was 14 years old when Hudson was born. He was absolutely fine the whole time Hudson was a baby and they got along great, but when Hud started walking...Ranger's demeanor totally changed. I think it scared him to have Hudson on his eye level. He ended up snapping at Hudson one day while he was walking by and caught him right under his eye...it bled and left a scar (still there to this day). Obviously, I loved my dog to pieces, but sorry.....baby comes first.

We haven't gotten a new dog since Ranger because I can't give one the attention that I think he/she deserves right now. I can't imagine adding a groomer appt., another mouth to feed, walking the dog along with a double stroller to my already packed schedule....no way!! Not right now.

I'm glad Buddy is doing so well with Shelby though! Beagles are supposed to be very good with children. And he's a cutie!

oh, buddy's one lucky pooch:) he is so good with Shelby!

Piri didn’t come just a pooch either, but sadly it happens a lot. I sent photos of Piri to her old foster mom and rescue agency we adopted her from. I send pictures of Piri and Anika and they have all told me it makes them so happy because a lot of families give up their dogs when human babies come into the picture!! They said it is VERY common. Anika will tell anyone who listens that Piri is her big sister!! Its true. They are sisters and my pup is still my baby!

We definitely have seen a difference in our dog's hierarchy in the house. We always laugh that our first christmas card had the dog in it, then he we were worried about how he would react to Cullen, but by the third christmas card and 2nd kid, he was not considered at all. Not he is just my boys' little buddy! Still part of the family, but in a very different way for sure.

My Daisy has been with me far longer than my husband. We don't have kids, but she still gets plenty of attention.
I love that you make time for Buddy.
Laurie
Lulu and Daisy