First off!!
Starting last Wednesday our baby girl started sleeping 12-hours straight a night!
Gosh, I'M.SO.PROUD!!
We did the Baby wise method along with a nightly bath time routine and Shelby sleeps from 7pm to 7am.
She's been sleeping that for sometime but we were doing a dream feed.
Dream feed NO MORE!!
Just in time for me to go back to work too.
Tonight is my last hooray before having to go back.
Don't think that Brad and I aren't having a glass of wine!
Granted, we started taking Shelby to nursery school today.
(btw - we will call it school because it's not just a daycare. They actually teach them and it costs enough to be called a school. LOL)

I was TOTALLY nervous about it but did better than thought.
I decided to go ahead and take her in for 7:30am since that's what she will be doing when we go to work.
She's having her early feeding there.
I attempted to get a picture but she wasn't having it. 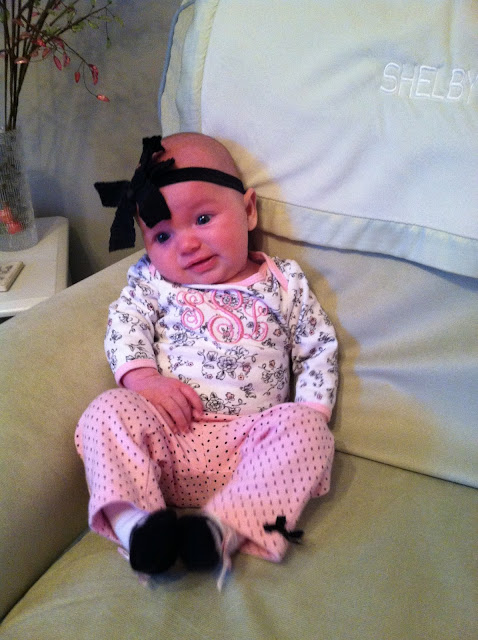 We did get a family picture at the school though!
I look horrific because I was going to the gym.
I did better than thought.
I left in tears and looked like a big nerd, but all was good.
I know she's in good hands and it's better that we get her use to being left now rather than later. 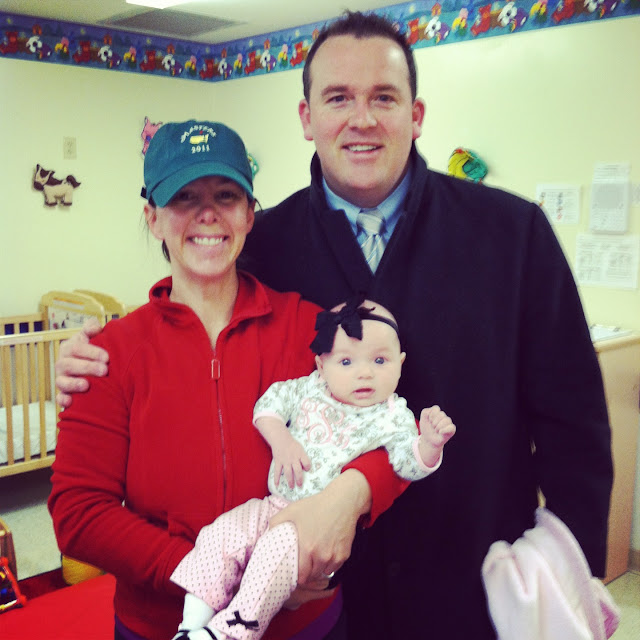 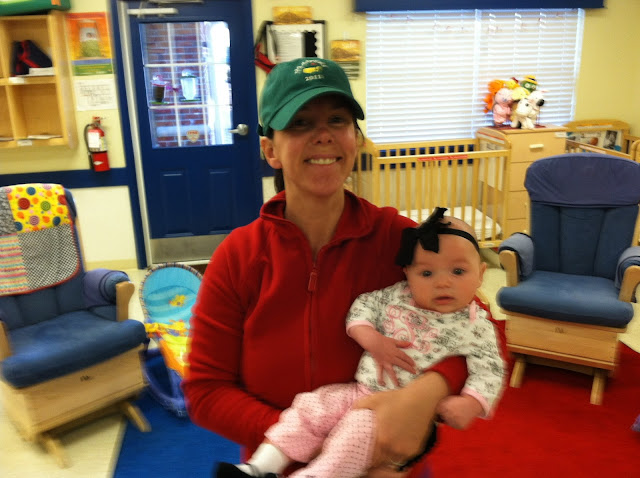 Daddy was so proud!!
We are both in love with where she's going.
The teachers are awesome and everyone is so nice. 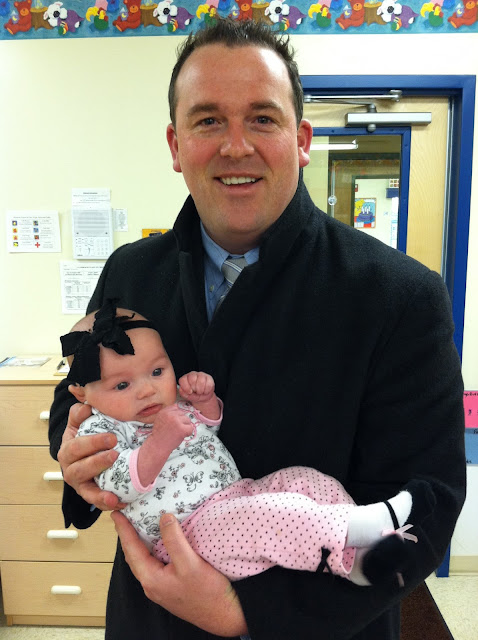 Of course, as schools do, they left notes for us at the end of the day.
I only left her until 3:30pm today but come Wednesday she will be there until 5pm. 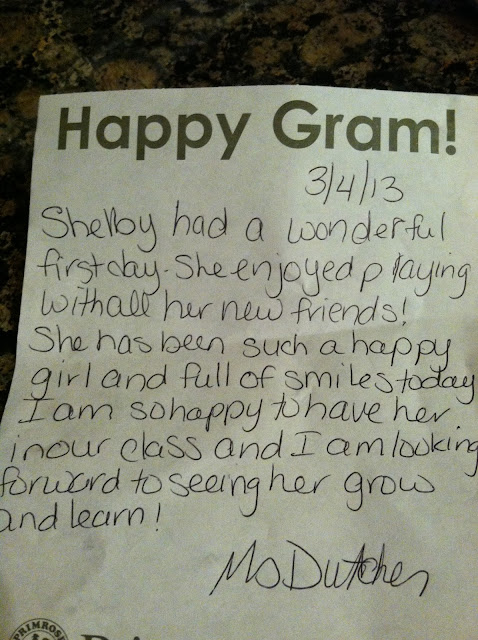 It's crazy to say, but I brought her home and she fell asleep for about 30-minutes(she only slept 30minutes while at school, what's new?)
Then, she was more happy and energetic than we've seen her in a long time?!
New environment maybe??
I don't know but I love her so much my heart could explode!
Girlfriend LOVES being told she's beautiful.
My Mom discovered this and I tell her all the time.
Check it out!!!
As for what I did today and what will I do tomorrow?
Run errands, shop and enjoy a few girls lunches before I have to hand in my SAHM card!!!!
Thanks for all the support!!

We dropped the dream feed too. I was scared to bc it was going so good with it. You know, if it ain't broke don't fix it.
But he's doing great. We've had first rough night that wasn't bc he was hungry. He's getting his bottom teeth. Of course it felt like hours but luckily it was only about 30 minutes until he settled down.
Shelby is just so sweet.

So proud of you and Miss Shelby! Love that girl!

That sweet smile just melts the heart. So happy to hear the first day went well. :)

ahh what a sweet note from the daycare, it must be reassuring as a mom to know your daughter did so well

hahaa. that video is so cute!
Enjoy your last days as a SAHM!!

I am sure dropping your baby off at nursery school is tough. She will love it and maybe you will even love being back to a work routine???

What is dream feed?

Yay Shelby!! So glad she had a great first day, as did Mommy. She seriously gets cuter and cuter.

Hooray for happy gram on her first day. Yes, we call it school too.

Oh my that laugh and smile are too precious!! So glad she is sleeping so well, it is amazing how much better you feel when they are sleeping through the night. Glad school went well!!

That is so cute. Love her little smile.

Oh my gosh! SWEET girl! I knew she would sleep through the night for you since you are going back to work! Glad she loved school. More importantly, I'm glad YOU love the school. We love Lyla's little school and that makes such a huge difference. We don't worry about her at all during the day. Her teacher also posts pictures during the day, so that helps a lot.

Awe! So sweet! CHILLS, little girls are the BEST :)

OMG that video is the cutest thing ever!!! And it sounds like an awesome school! Glad everything went well!!!

Would love to hear more about your experience with babywise. We're doing it with Charlie and I like knowing real world examples from other moms.