Lake Weekend and other Stuff

The Summer is almost officially here!
I consider Memorial Day the start even though the calendar says something else.
This weekend Brad and I spent the weekend at the lake and a few of our friends joined us.
Low-key and nice.
Blogger isn't cooperating but here's a picture of Amanda who brought the cutest fish cookies from her favorite bakery in Charlotte. 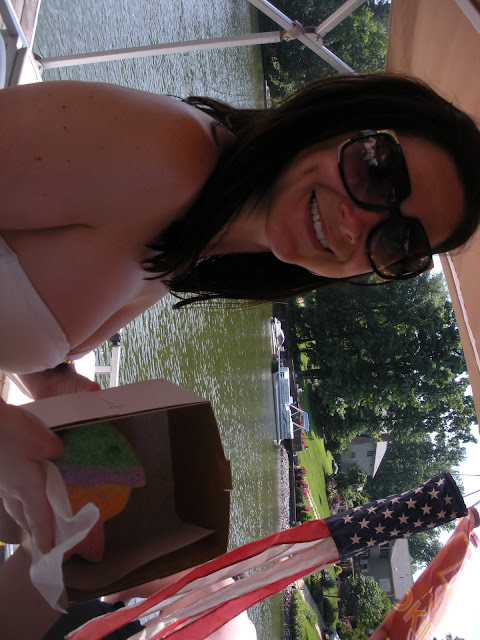 Perfect for the lake - don't you think? 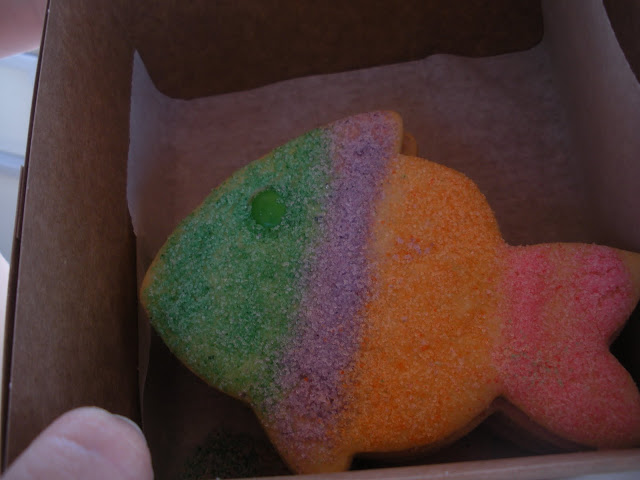 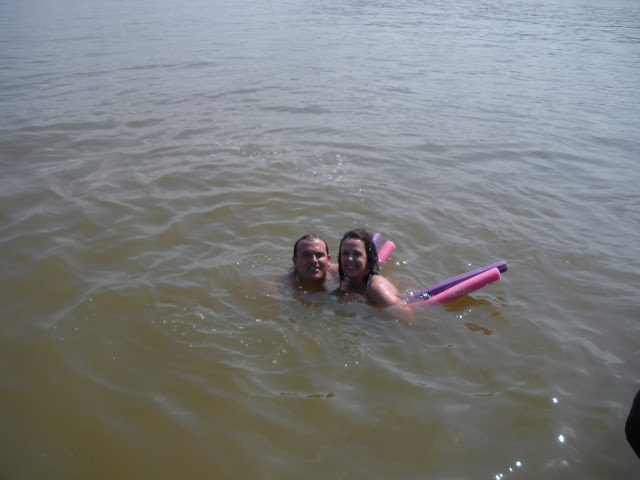 The only 'sucky' part of the weekend was a gas can tipping over in my JEEP.
It was an accident but wow..wow..oh..wow does it stink.
Brad put baking soda on it, among other things but it doesn't seem to have solved the odor.
Any ideas?
Let me know. 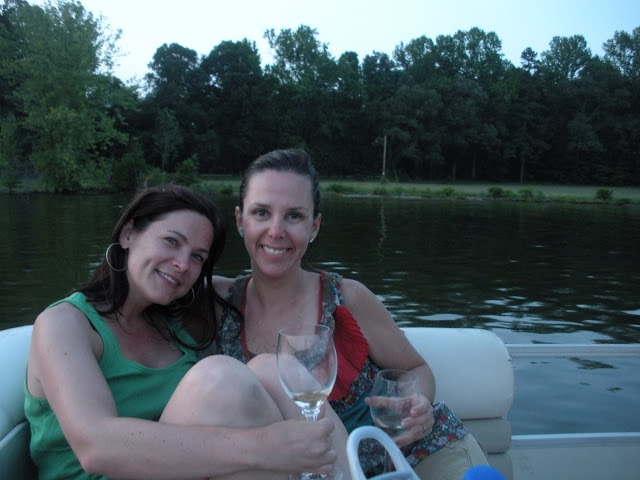 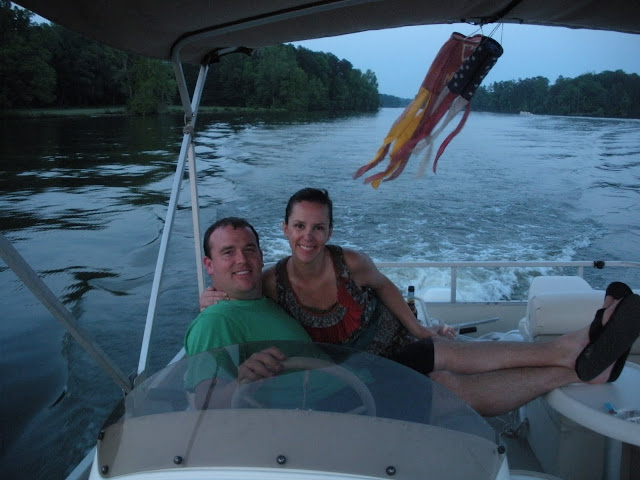 The weather was great too even though it's starting to get really hot here! 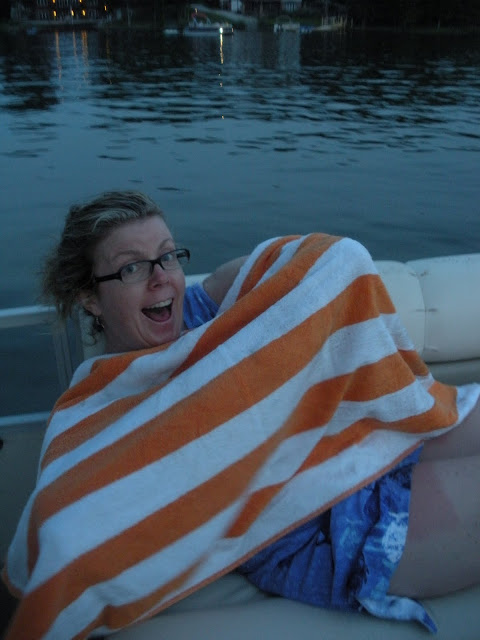 In other news:
* Our tenants in my old condo near downtown told us Friday that they're moving out.  They are breaking their lease early. So, we're putting the place but up for rent on August 1st.  Great.  Just a pain in the butt.  It is what it is though. (Update:they called this morning and said they're not moving out after all. Thank Heavens!)
* It's a big weekend here in Charlotte.  It is race week! There are three NASCAR races held in Charlotte each year and one was this weekend and next weekend.  There is even a big festival with concerts in downtown Thursday, Friday and Saturday.
* Speaking of this next weekend.  We have a packed agenda.  One of those concerts on Friday, a friend's 10th wedding anniversary party at their ranch, the lake and our nephew Reed's 5th birthday!
* Our Summer calendar is starting to book up.  I think we have plans for the next 3 weekends.
* Actually our calendar for the Fall is starting to get booked too.  Two LSU games are part of our plans.  LSU plays West Virginia in Morgantown and two sets of our friends are WVU fans so we'll go with them.  Also, LSU plays TN in Knoxville.  Brad has family there.
Good Times Ahead!!
* I've been catching up on Housewives tonight and I have to say that the Jersey season opener with the brawl at the baptism reception IS RIDICULOUS!!
Well, that's all I have for tonight.  Happy Sunday!

I think I like Jersey the least.......just such an odd lifestyle!

You know, because Orange County is so normal. :)

And, I love the pics at dusk. Best time to be on the water!

Just watched the Jersey episode last night and WTF? They are all freaking crazy.

Oh NJ...I will tell you are there are nice and classy people in NJ. However, there are some of that trash also! And they are quite hysterical to watch in person.

Yipee for lake days!! Love it. Looks like good times. So sorry about the gas can though. I bet the smell is awful. Wish I had a good fix for that, but I'm clueless.

Happy to hear the peeps aren't moving out afterall. Such a relief!

I love the drama on RHONJ. Hilarious! Definitely keeps me entertained. Although it gets a bit annoying at times too.

Love the lake days! We have a few planned soon!

You're a busy lady!

I can't believe you have a tan and are swimming, so unfair!

Cute lake pics!! Ohhhhh your poor Jeeper! I smoke in my car- dryer sheets work pretty well, but it's all leather so it's not stinky. I don't think so, at least... Gasoline is a whole different deal...google it!
Lots of adventures coming up for Dee! Can't wait to hear about them!

SO fun!! I absolutely love lake days! Those fish cookies are adorable! Tons of fun.

You should take the Jeep to one of those professional car wash places. I am sure they can do something about it.

The RHOanywhere are keeping my laughing for sure! I SO want a boat. I love your lake stories, wish M was into them. BTW, cute cookies. So gas actually spilt into your jeep? NASTY! I don't know what you can do. Wonder if some kitty litter or something like that can help soak it up? I will ask my dad tomorrow. He always knows stupid shit like that.

Ohh, it is still too cold for lake days here, but your pictures are getting me in the mood!! Looks like you had a fabulous weekend. I think NJ is a set up- I mean all of Teresa's family on the show? I feel like they are all cashing in on this show and creating the drama for the money. I mean, can people really act like that???

Dee, you look great! Those lake pictures make me yearn for a boat ride, a noodle or two, and a beer in a koozie. And those fish cookies ... fabulous - which bakery?

Krysten @ Why Girls Are Weird said...

Jealous, I want to go swimming but it is way too cold!