Miracle on the Hudson and NASCAR Hall of Fame

As I mentioned a couple of posts ago, our niece Holly is visiting from Louisiana for the next several weeks.
She's staying with my parents while in between jobs and we are trying to make the most of her visit showing her all the wonderful things the Carolina's have to offer.

To be real honest, the one thing I don't like about Charlotte is that I feel that there's nothing very special to take visitors/tourists to do.
We don't have a Liberty Bell, historic waterfront or anything much to see.
It's just a big city with a bunch of banks in it.
Granted, the tourism and convention bureau is trying to change that.

So, while here we decided that Holly would probably enjoy the NASCAR Hall of Fame the most.
It's been open for a couple of years now and I'm embarrassed to say I haven't been.
Still haven't been.....

My parents kept Shelby home from school on Friday and took her and Holly.

I laughed when I saw the pictures because I noticed my Mom actually took Shelby to the museum in what are pajamas!
LOL!
Thank goodness she got something on them and got changed into a REAL outfit.
~~~~~~~~~~~~~
Moving on...
Apparently, she was a huge fan of sitting in the race car. 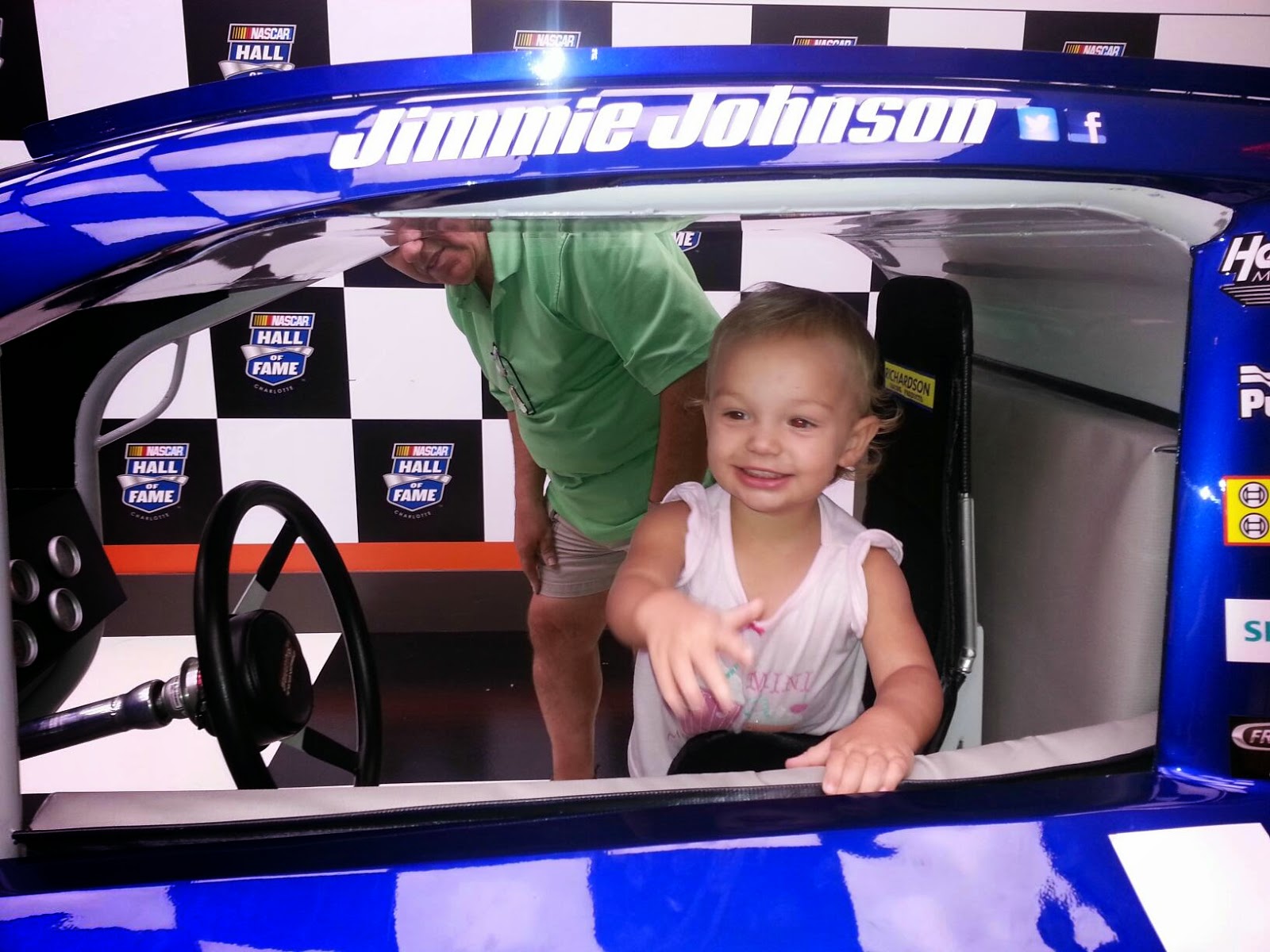 They all really enjoyed it, especially my Dad, since he's a race fan. 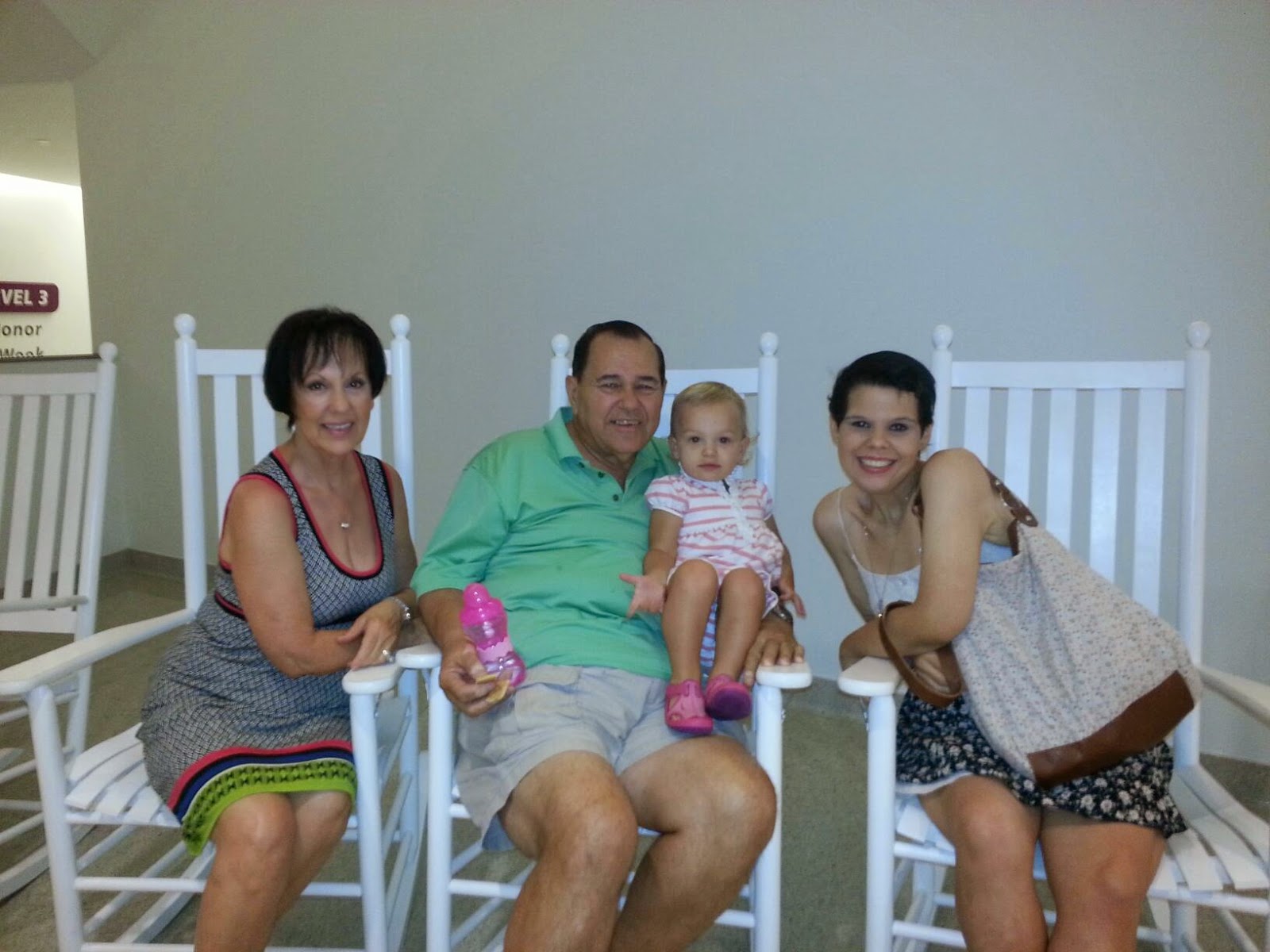 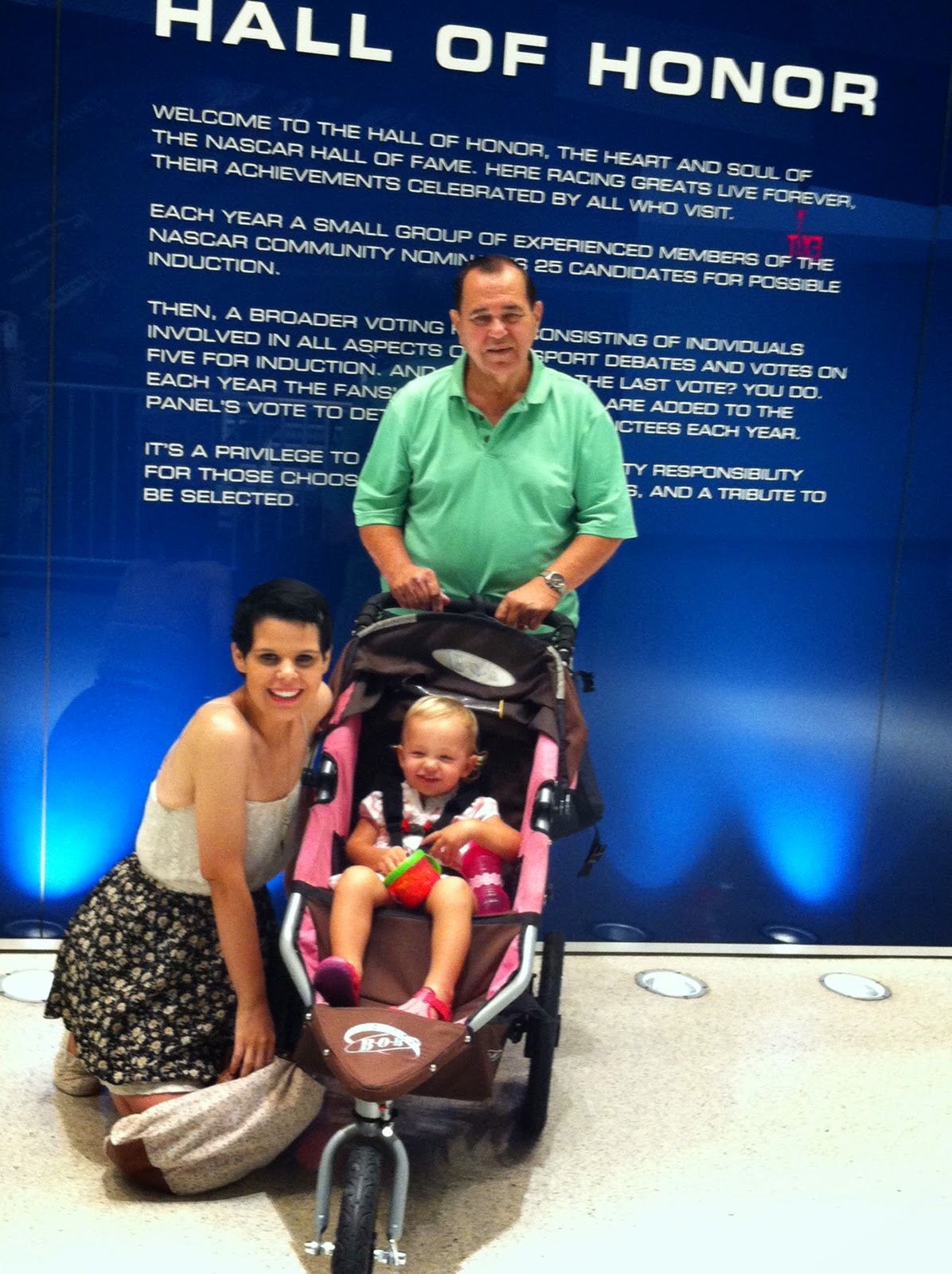 By the smile on Shelby's face in all the pictures, she seemed to enjoy it too. 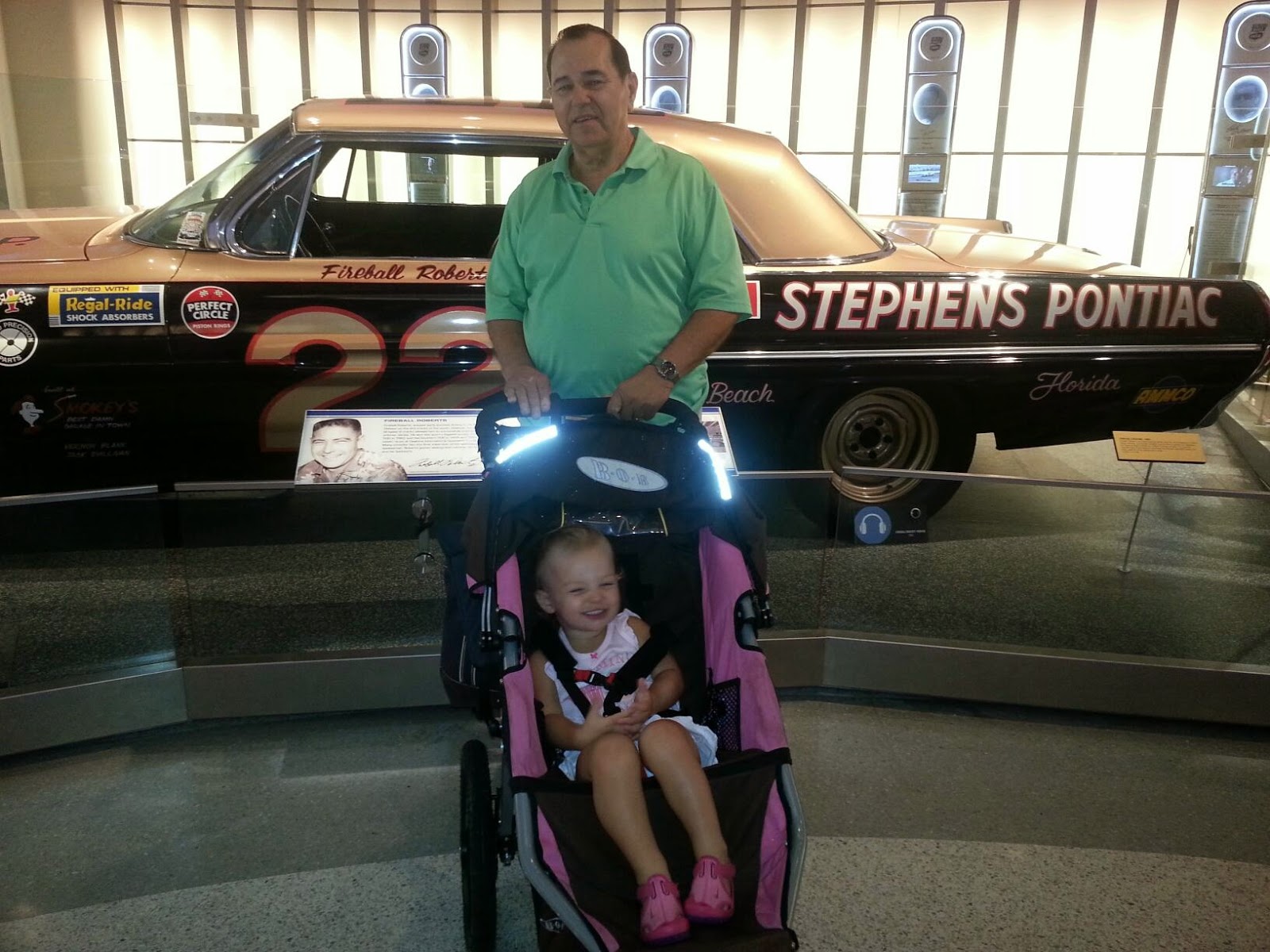 We are so proud of my niece Holly.
She has lost a total of 200-pounds over the last 5 or 6 years.
She's finally hit her goal weight and it's truly remarkable.
Click here for a refresher on her weight loss journey. 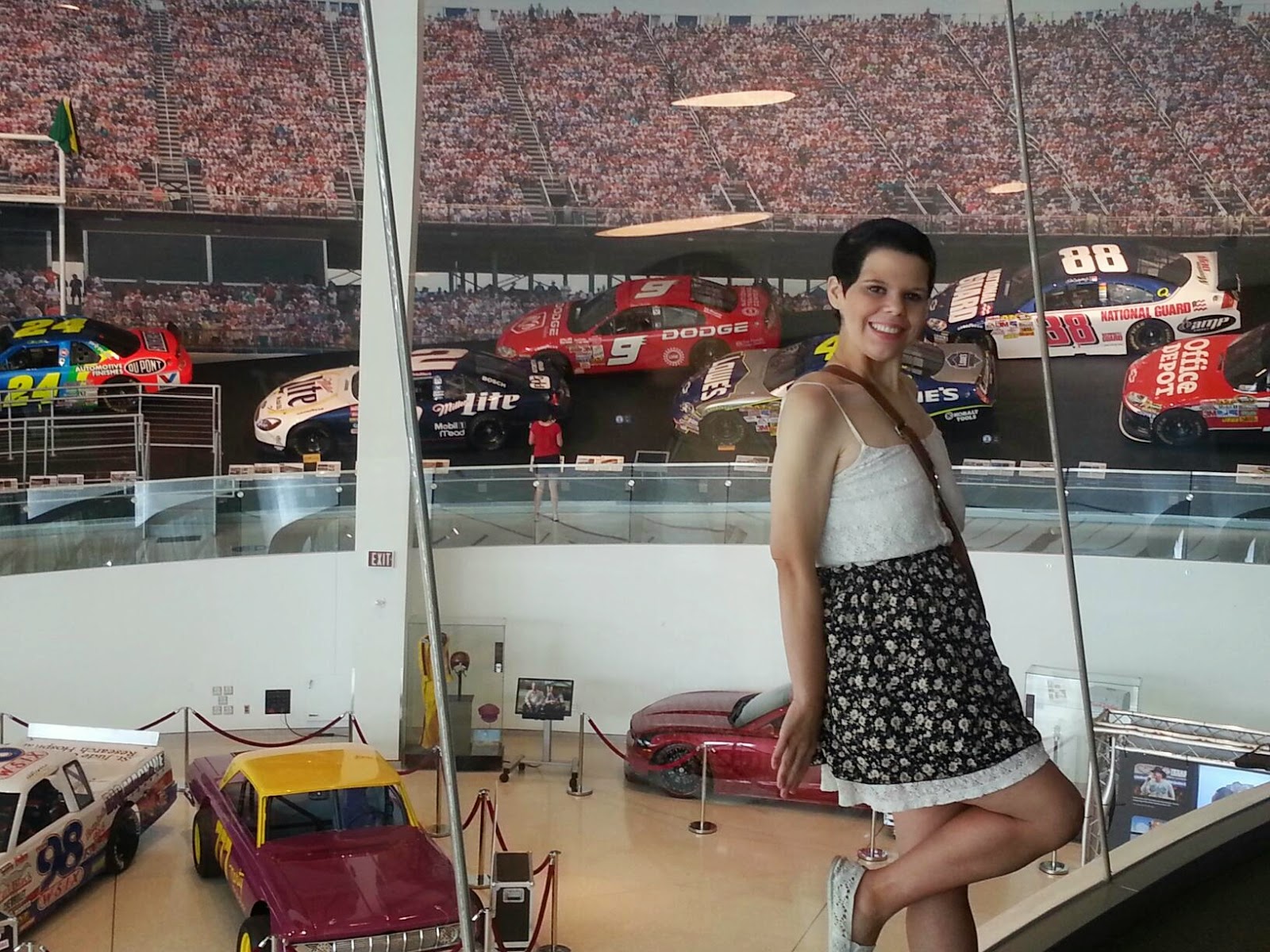 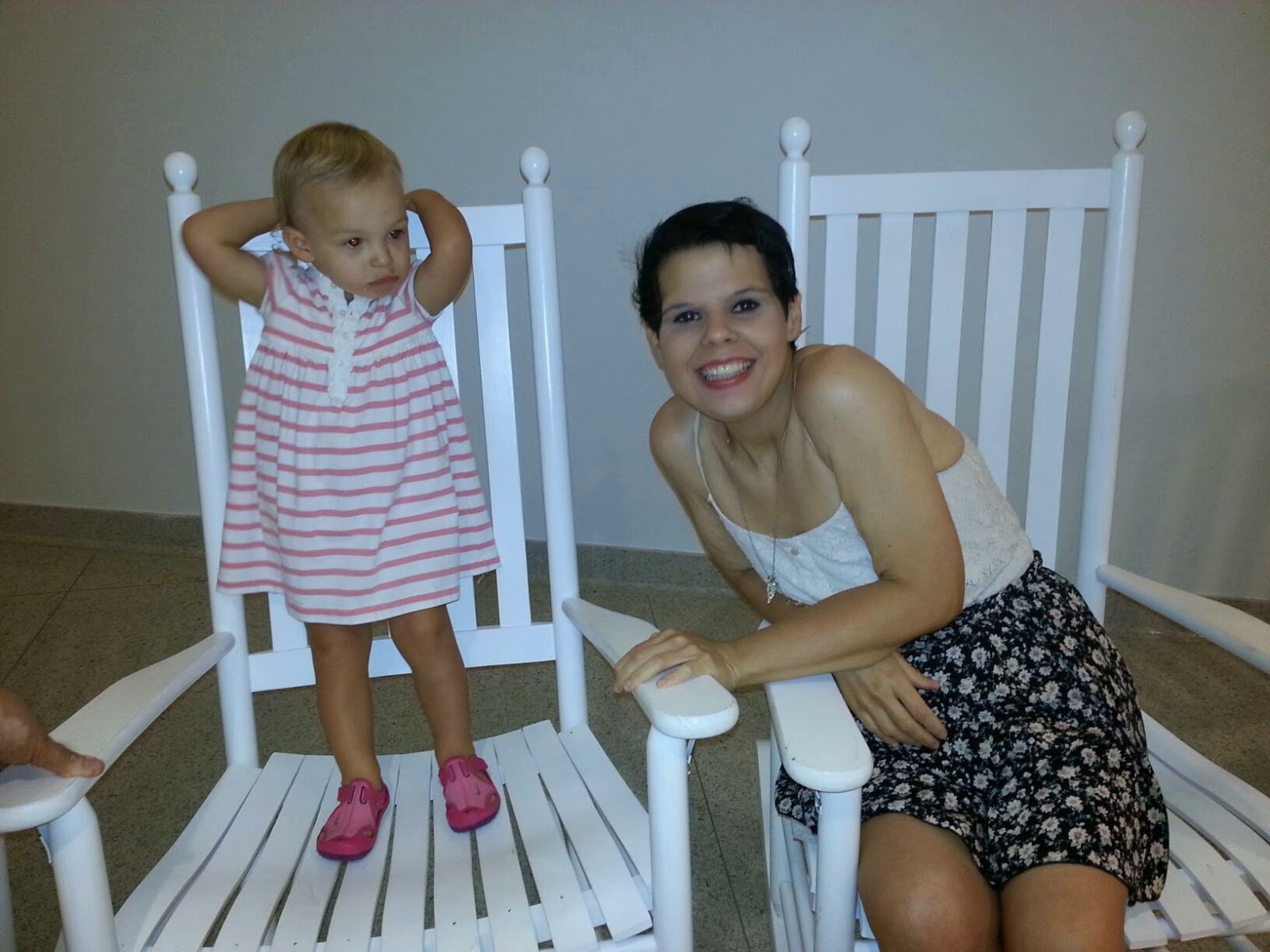 I had big plans for all of us on Saturday but the weather was brutally HOT!
I'm talking, a heat index into the triple digits.
So, instead of going to the US National White Water Center, we went to the Carolina's Aviation Museum, that happened to be free that day. 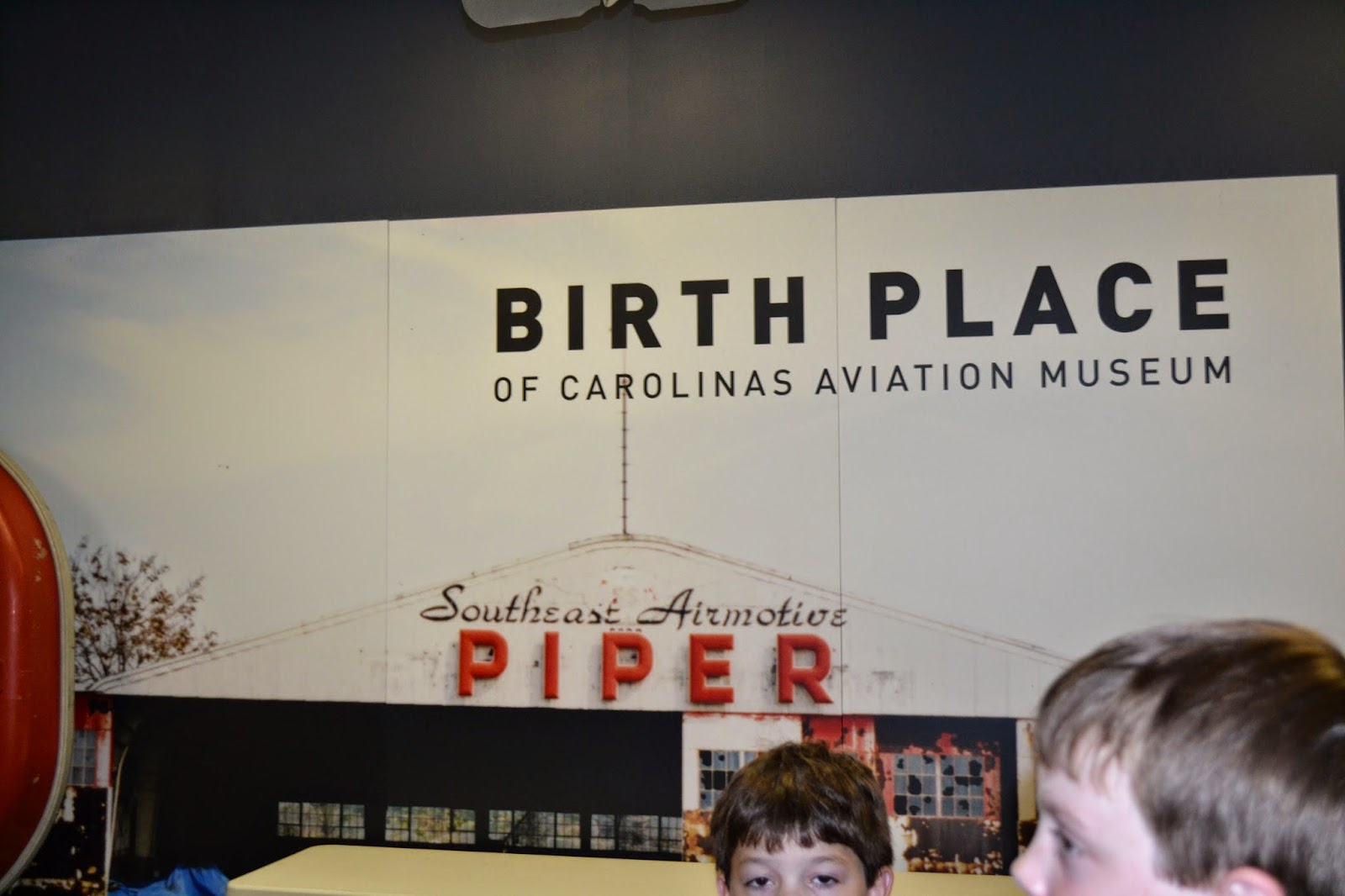 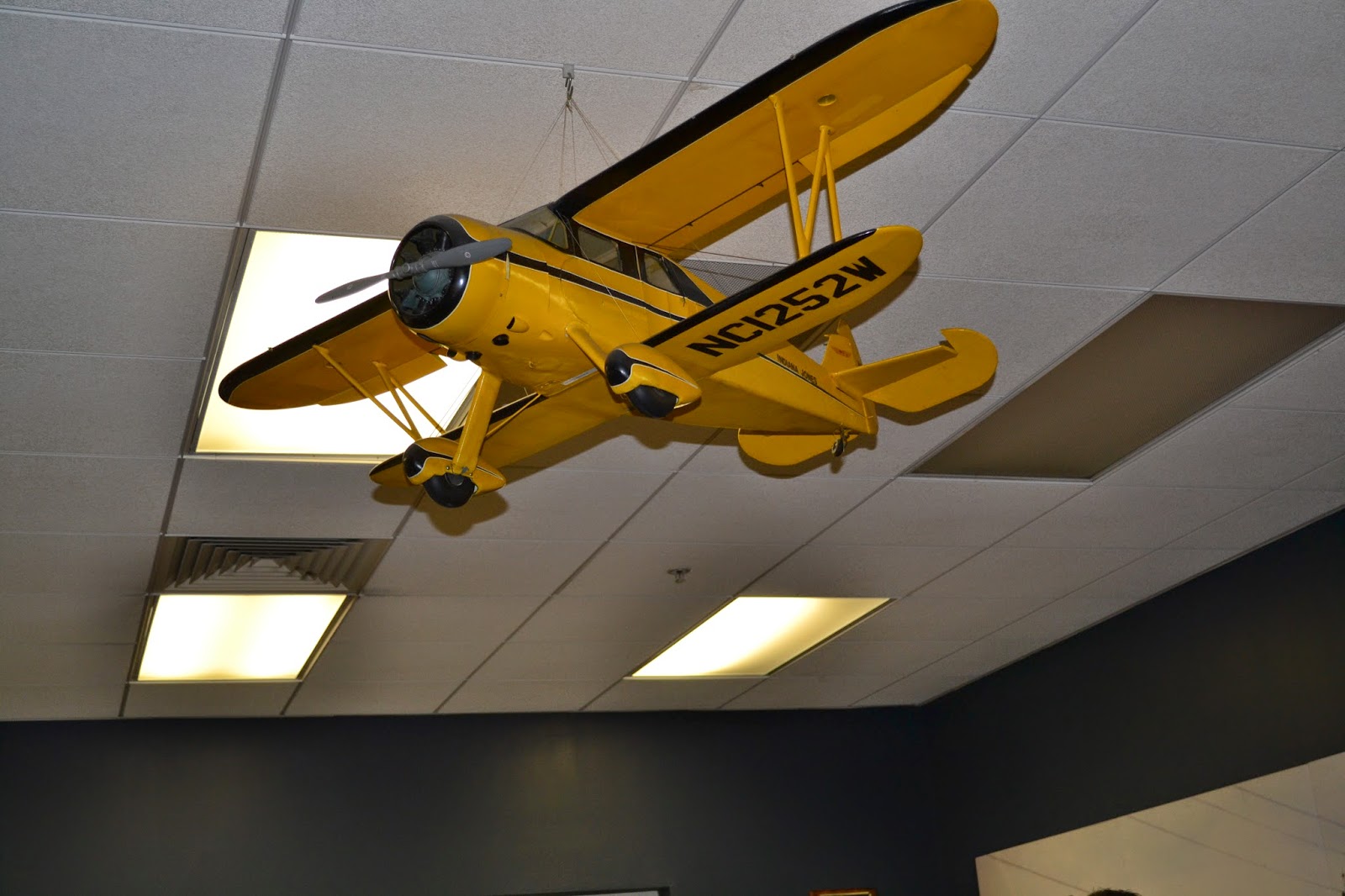 I mentioned earlier this week in a previous post how hot it was in there and shared a few pictures, but I forgot to mention that the big attraction inside the museum is the plane that landed on the Hudson a couple of years ago. 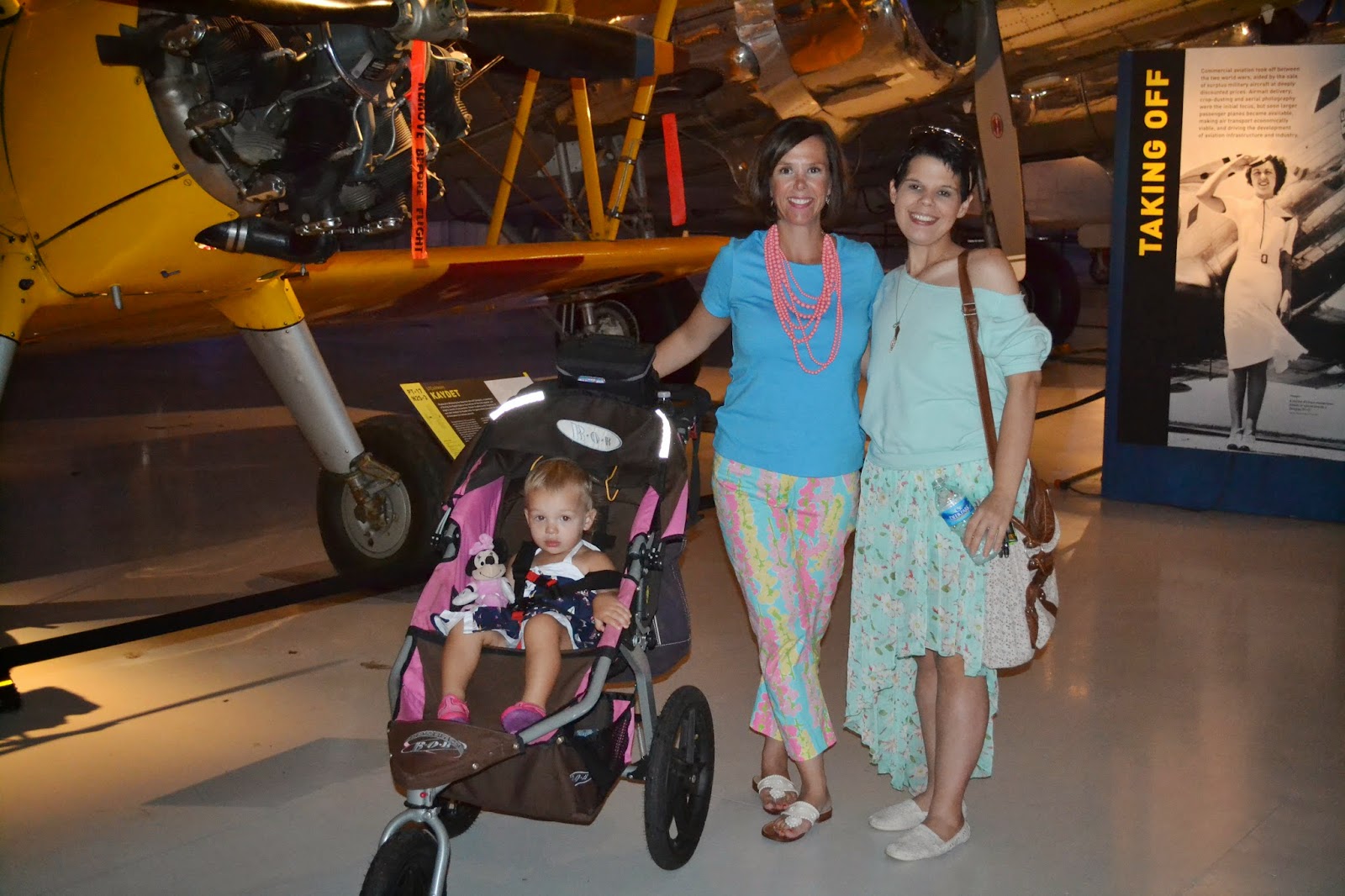 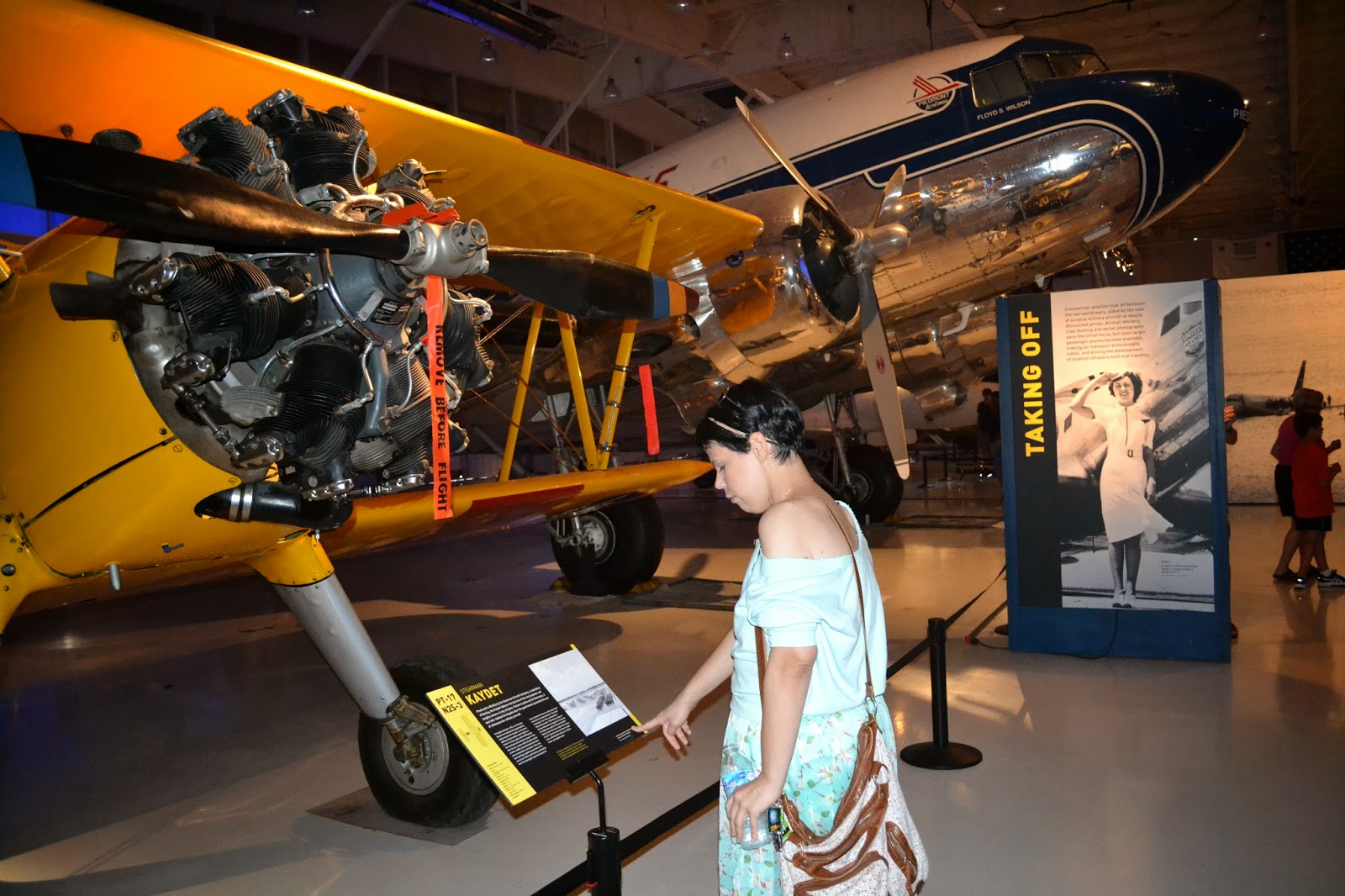 It's pretty crazy to see the damage that the aircraft sustained. 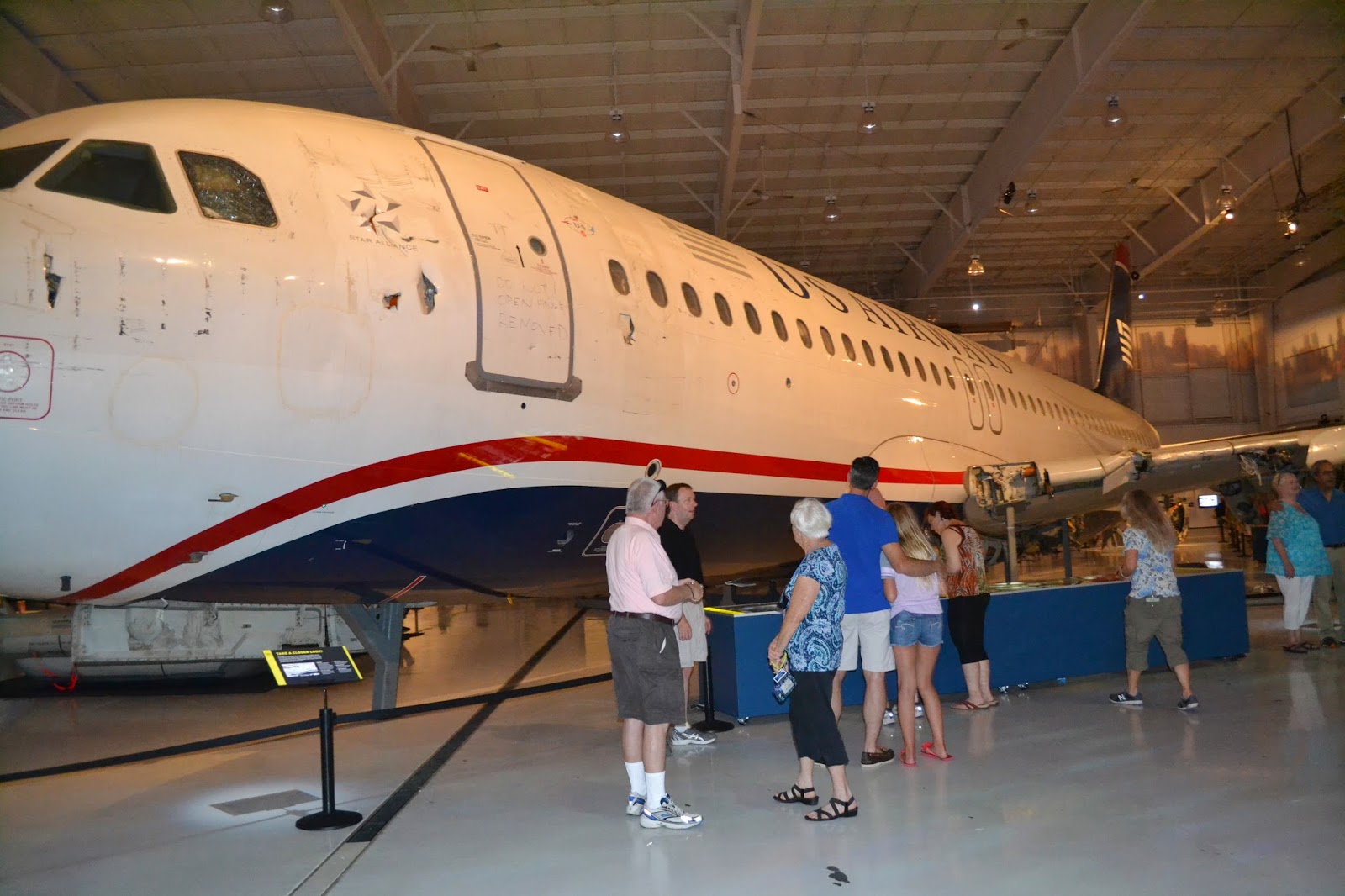 There were also a couple of the survivors there talking to visitors.
A few interesting notes:
* there were no pets on board
* there was one passenger who stood on the wing when they were being rescued and was on the phone with US Air trying to get on the next flight home.
* Bank of America sent a private jet down to get all of their employees home that night. 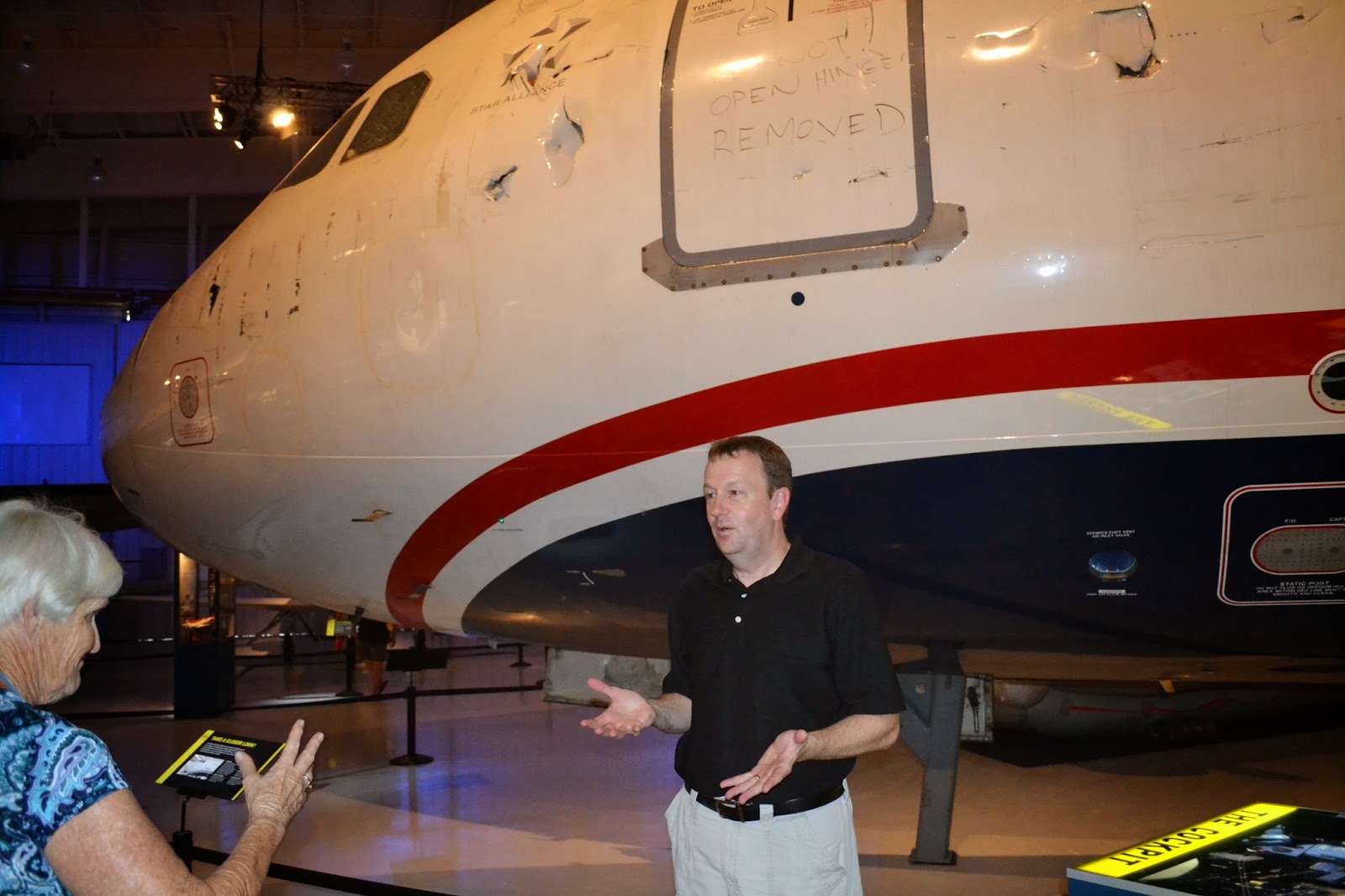 I don't know about y'all, but there's no way I would have gotten back on a plane that evening after something so scary and dramatic! 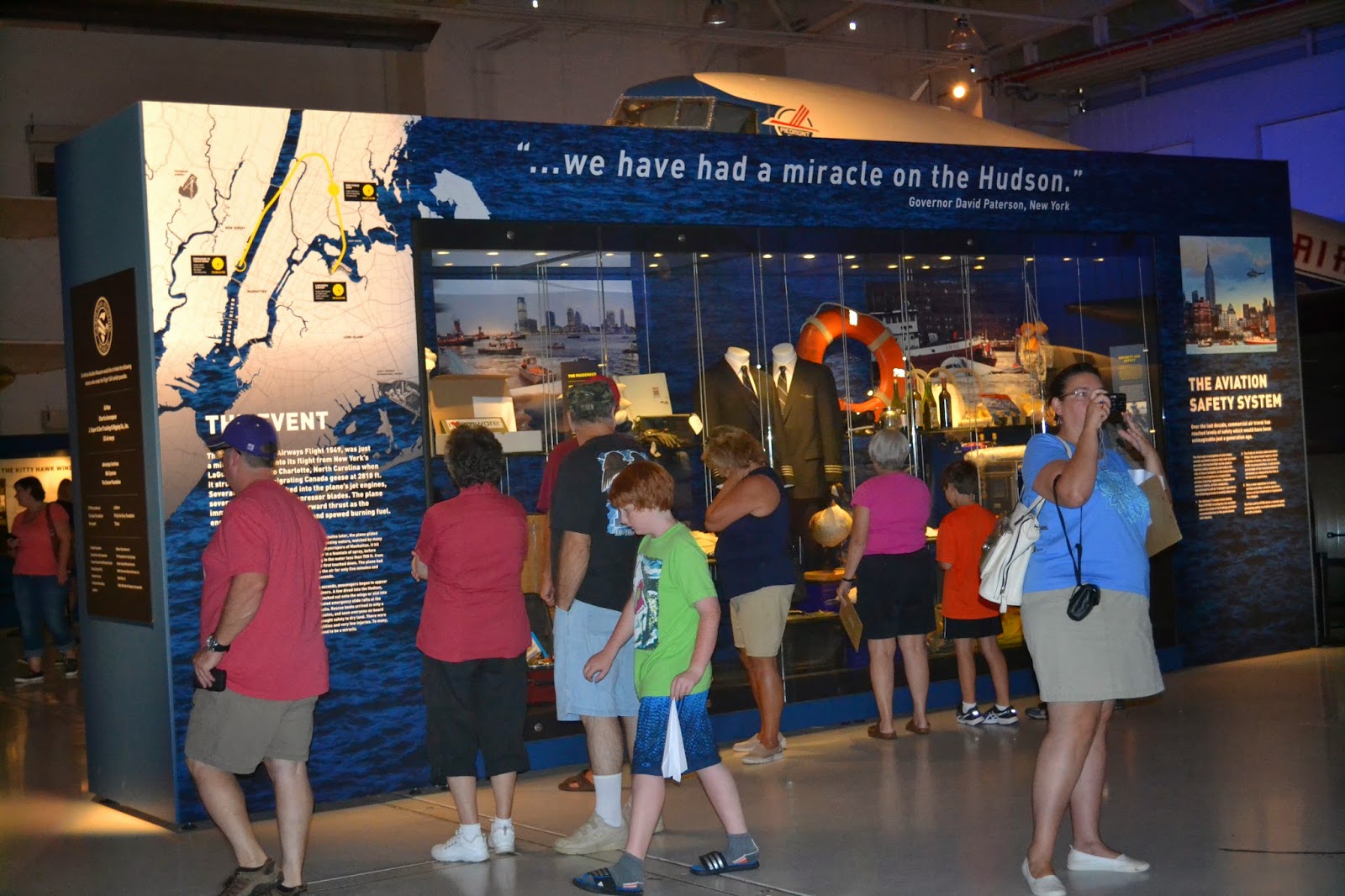 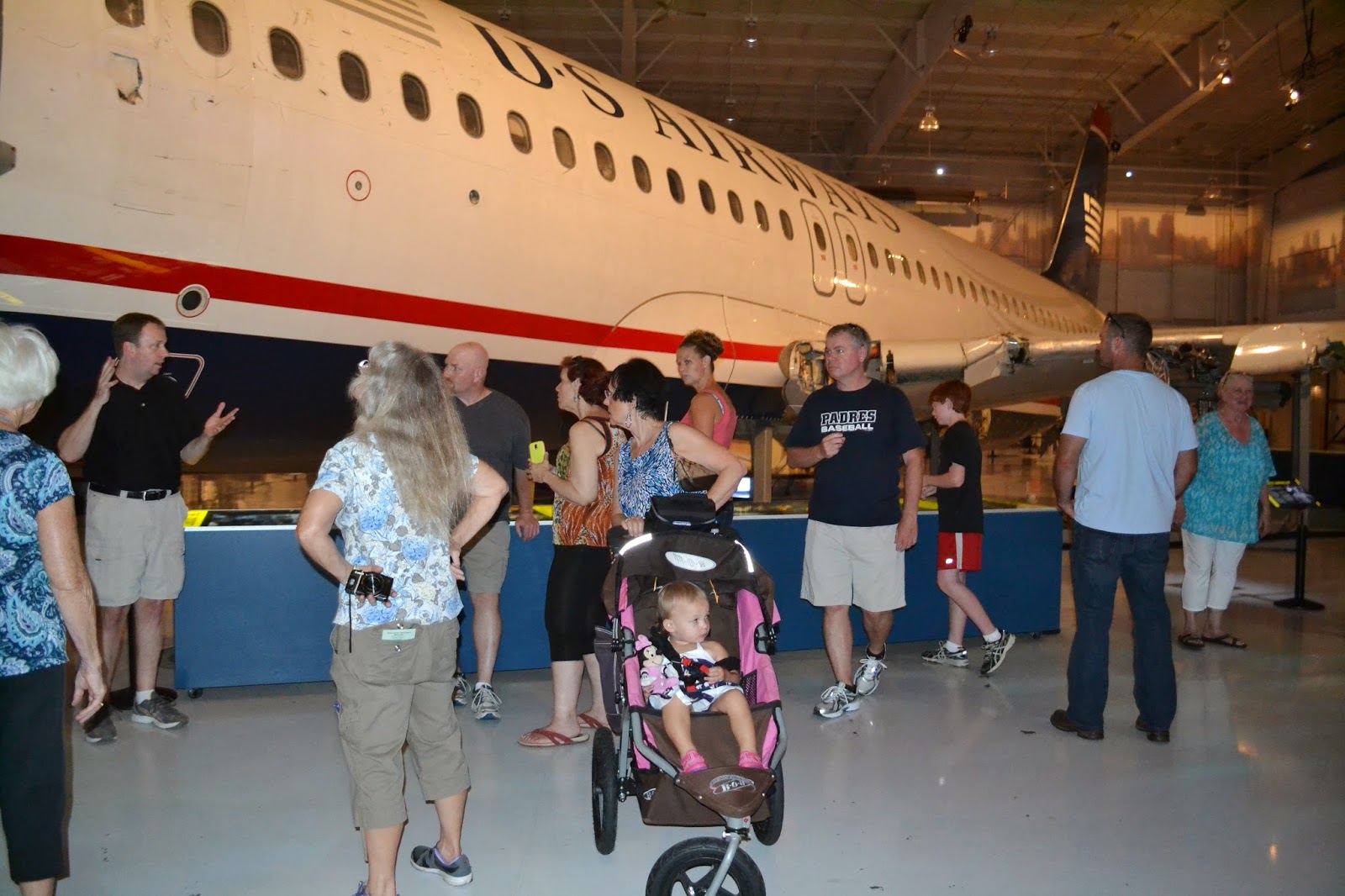 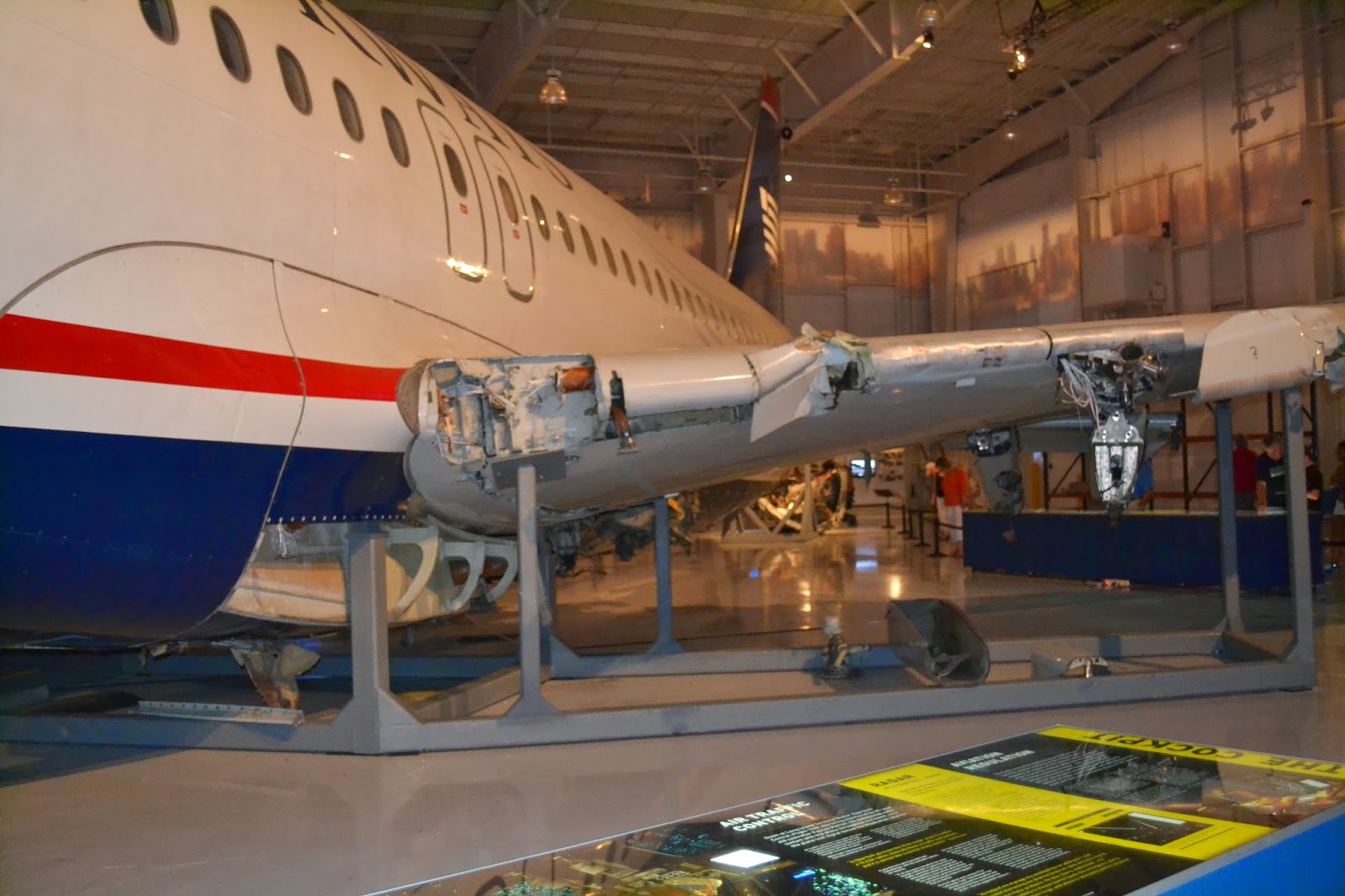 They had different items on display from the plane and its passengers.
Overall, it was very neat to see and read about, even after seeing it all happen firsthand that day. 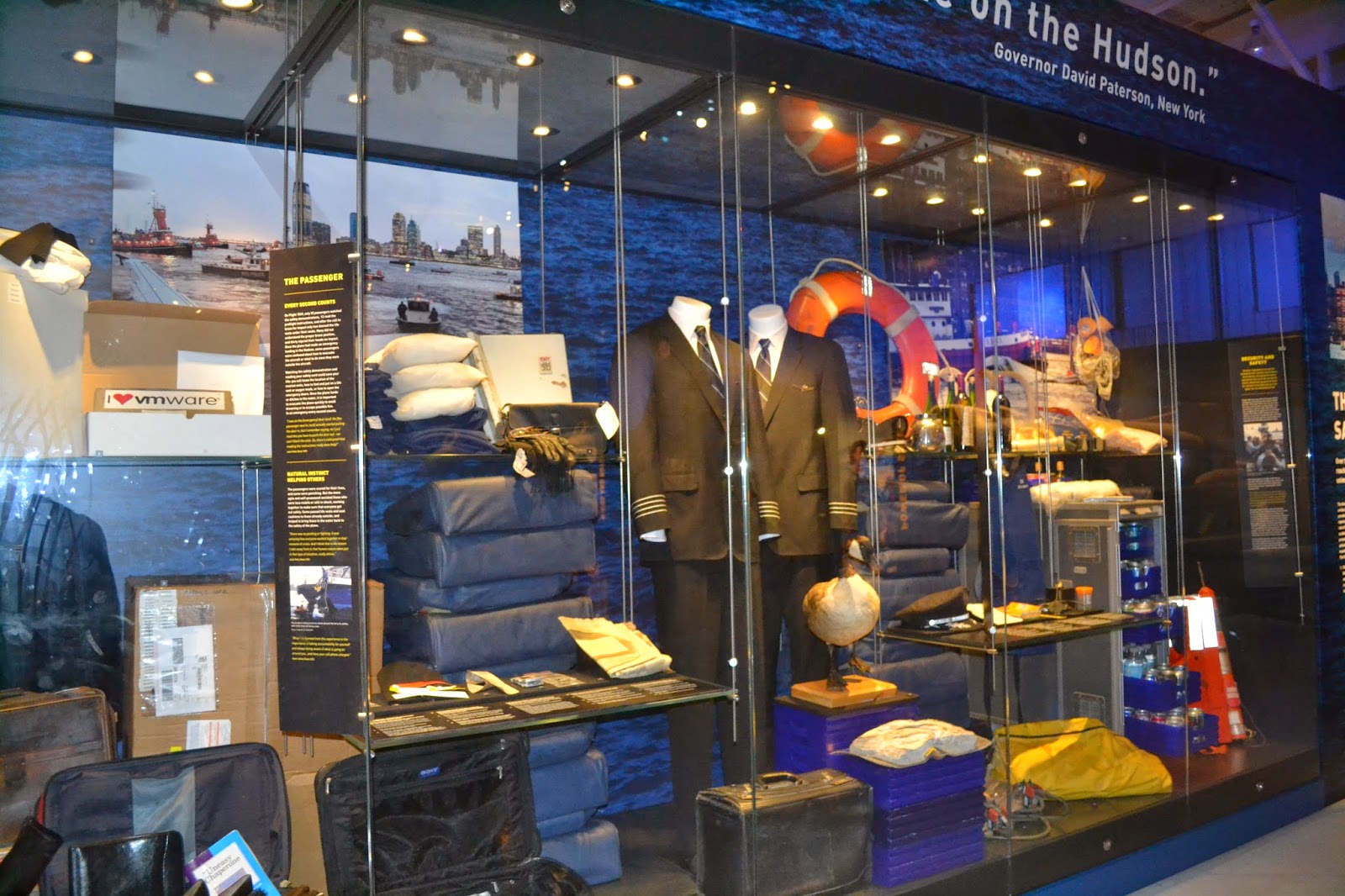 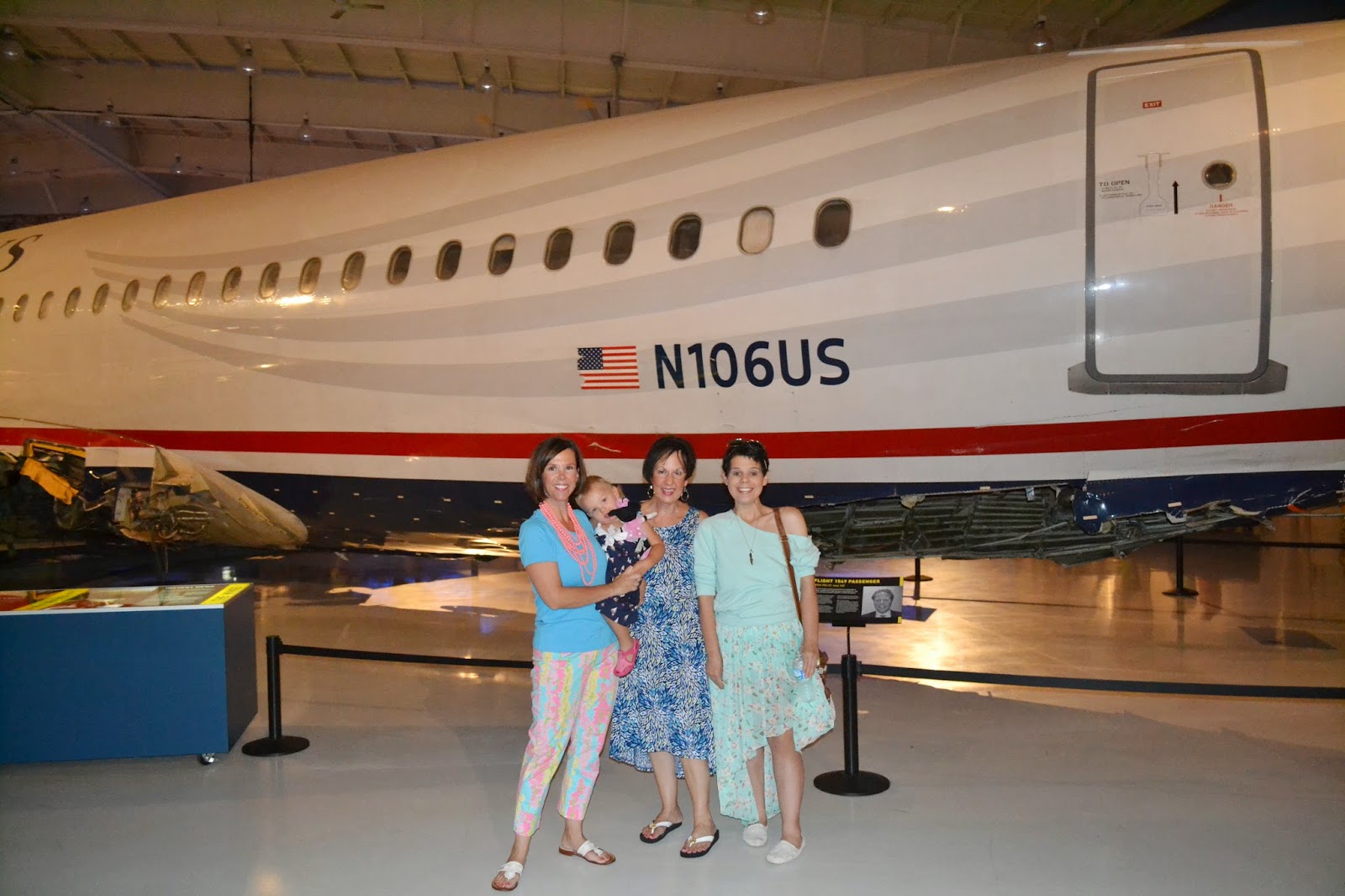 The museum was full of all types of aircraft and there were things fun for kids and families to do.
Such as sit in different types of planes. 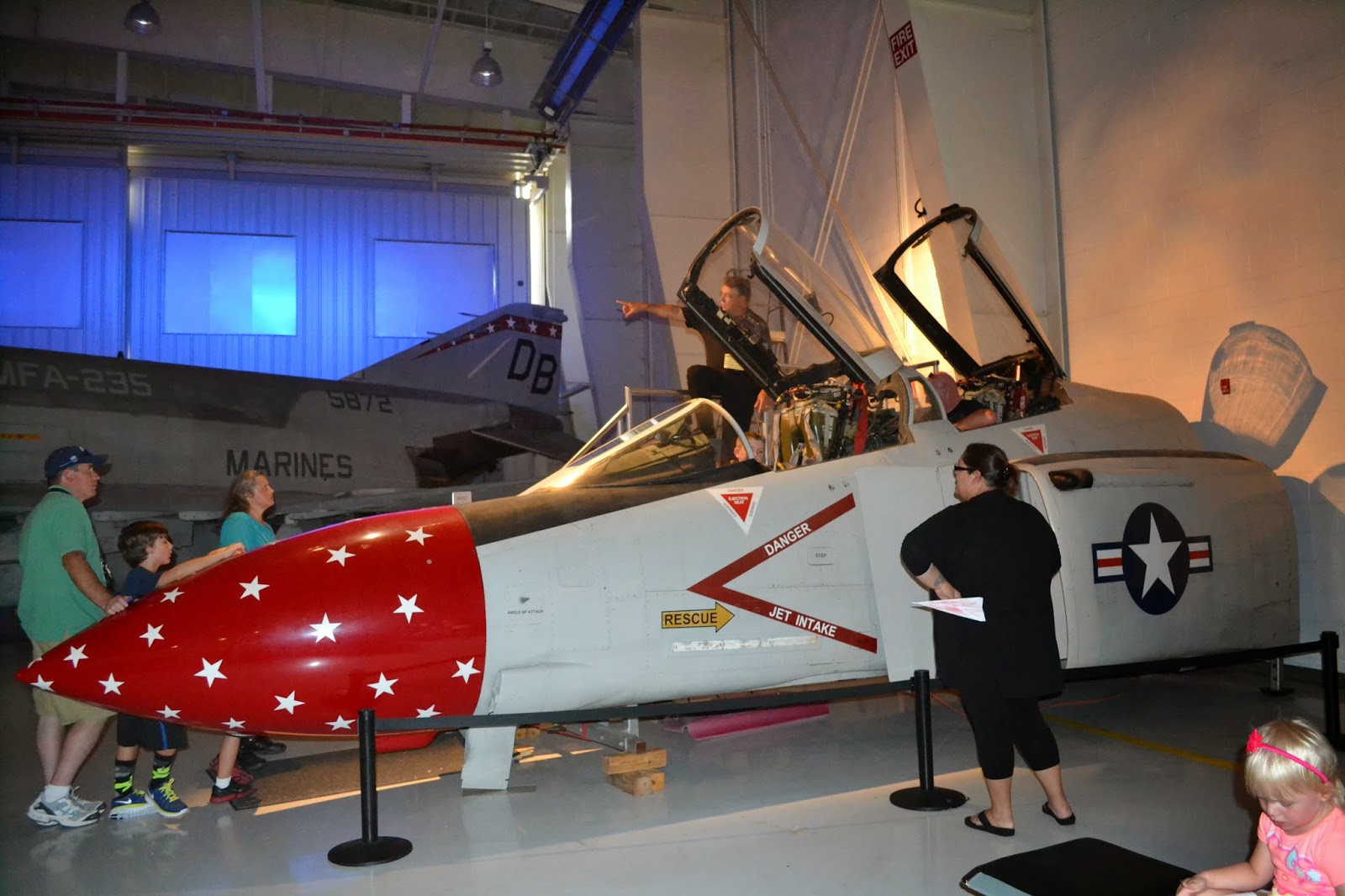 Check out a life boat. 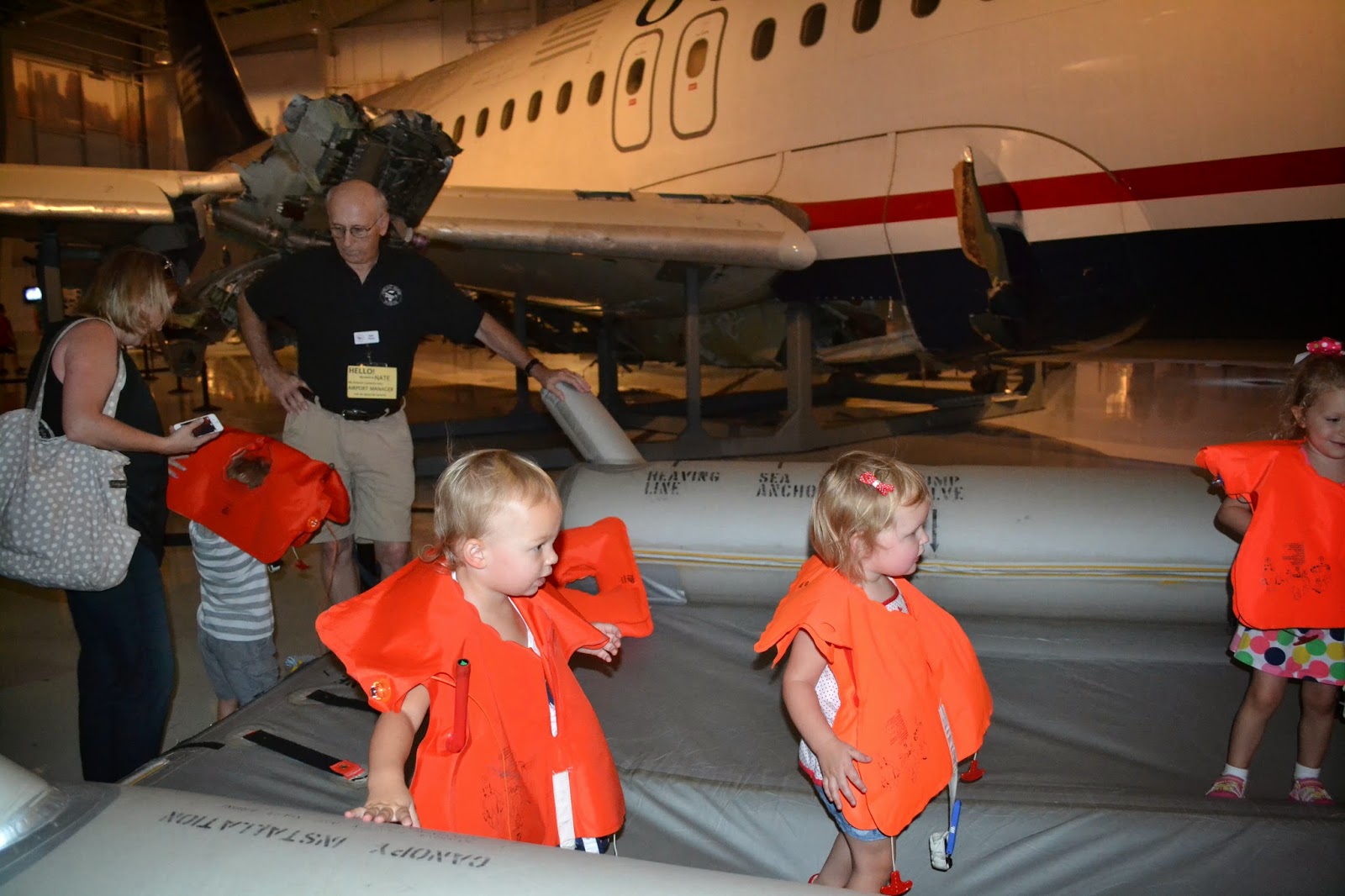 A meltdown ensued when I attempted to get her off of this and give the life vest back. 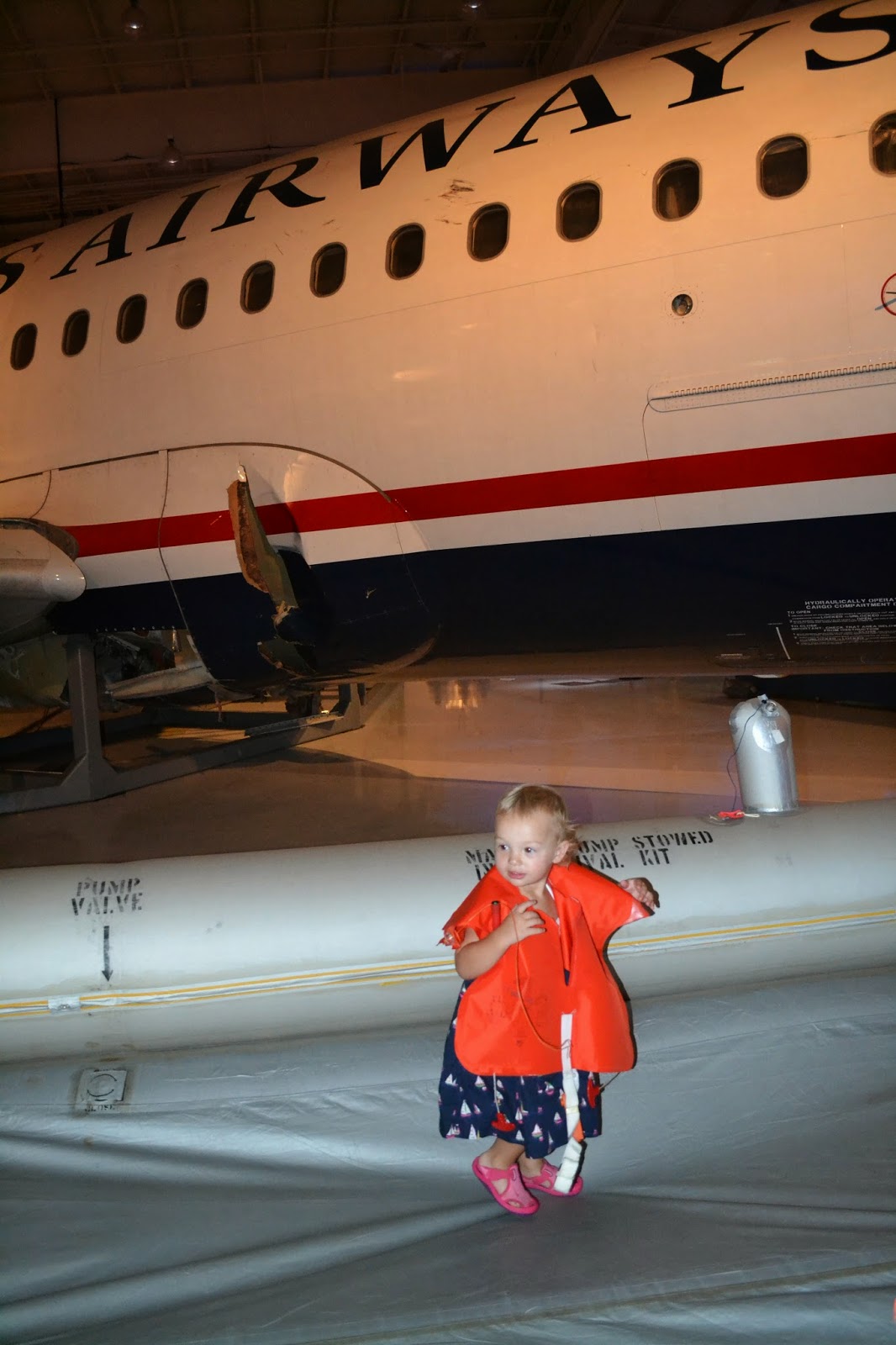 Some things are getting challenging. 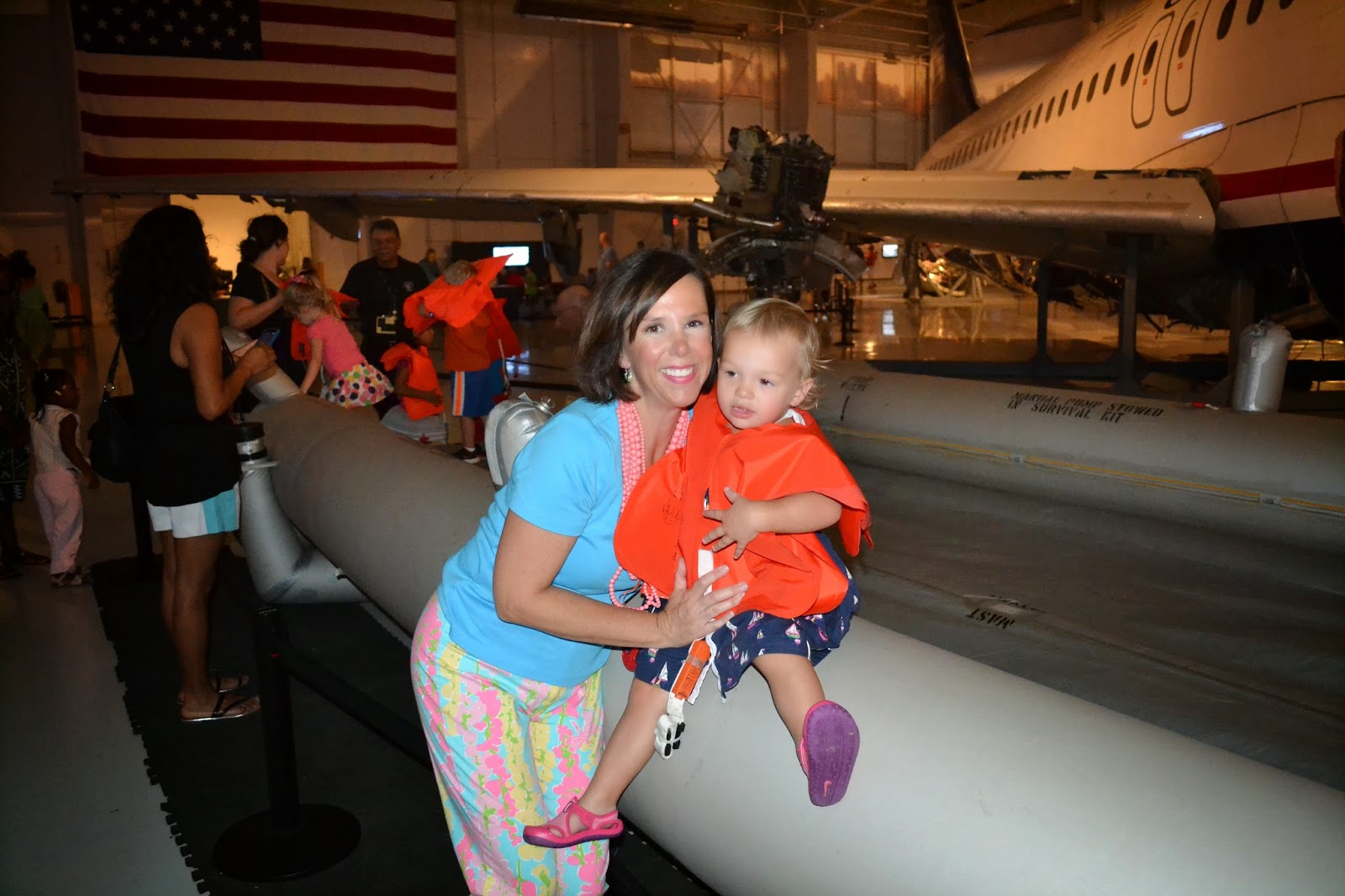 When it came time to get her out of this, my Mom talked the docent into bribing her.
UGH... 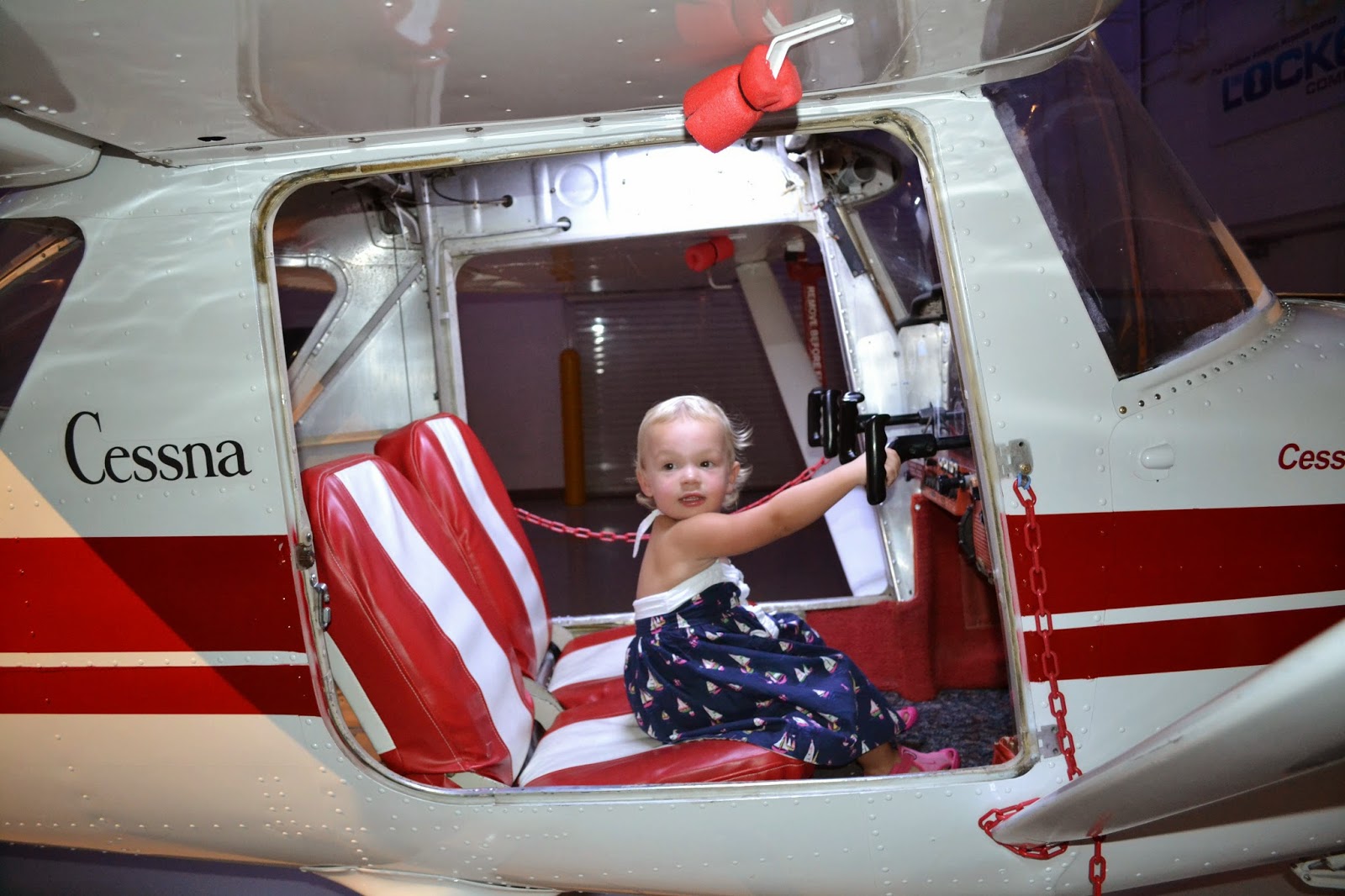 Overall, pretty cool museum for something fun to do here in Charlotte. 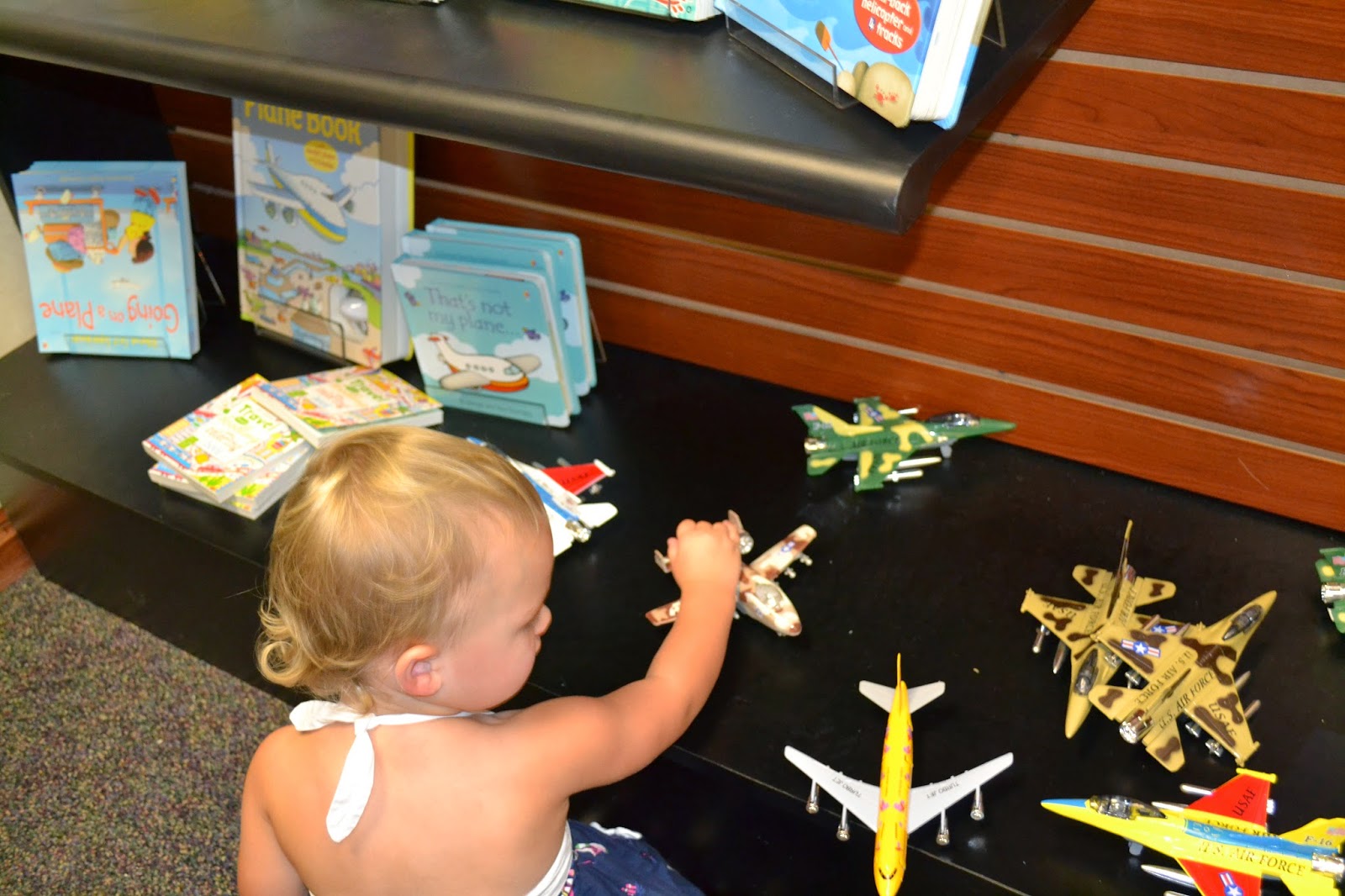 I still would have chosen the White Water Center, but now there's something for me to take Holly to do when she comes back to town in a few weeks.

So, that's it for these two attractions here in the Queen City!
Check them out for yourself!

Your parents are just darling. I would love to have a niece, how fun to have yours visit! I didn't work for two months between graduating college and waiting to begin a job, and it was so nice. Sometimes a break is good. I'm sure she will enjoy staying with her grandparents.

What a fun adventure and WOW - your niece looks AMAZING!!!

That is amazing that your niece has lost so much weight! Seems like some fun museums for sure!

What a cool thing to see. Love the life boat pics, too.