We're back from our quick weekend in DC and the Northern VA area.
We had a great time and had the chance to catch up some old friends and new ones.
I'll jump right in.
Friday morning I decided to drive into DC instead of riding the Metro because everyone seemed to think I would have not found parking.
My friend who I had planned to meet for breakfast had to cancel due to a job interview but we caught up later in the weekend. Great to see her.
BUT..my plans to meet up on the Hill with I Do Declare still stood.
On my way to meet her I took in some of the sights. 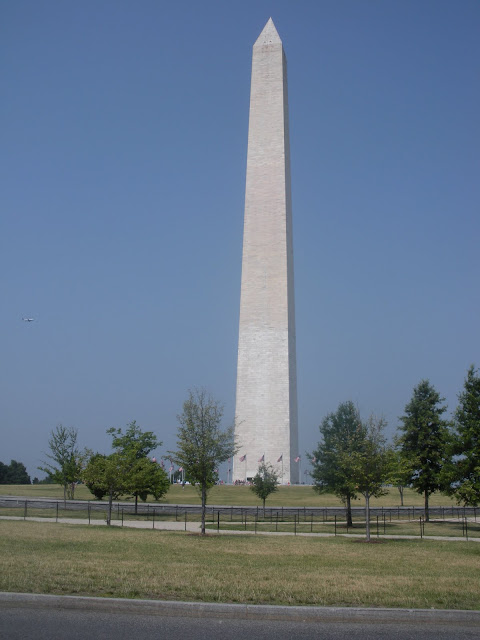 Love this town! I love all the monuments and architecture. 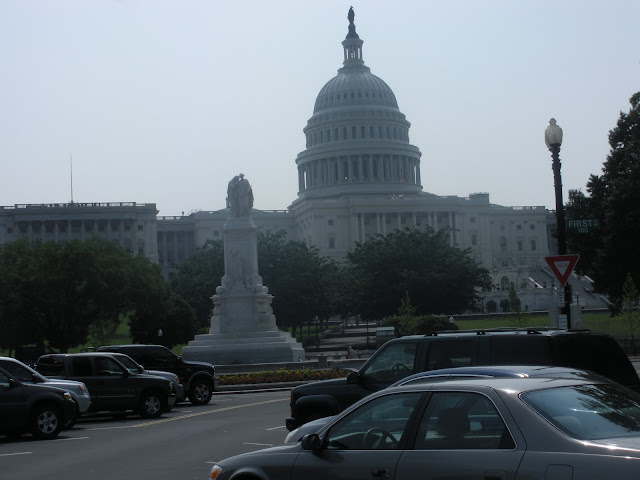 Then I met I Do Declare and she was just as I expected. I felt like I had known her for years. We have so much in common it's ridiculous!  She took me on a tour of the House but I wasn't able to take many pictures except this one.  She took me places that I would have never been able to go except with a Hill staffer.  Very cool! Thanks a TON! 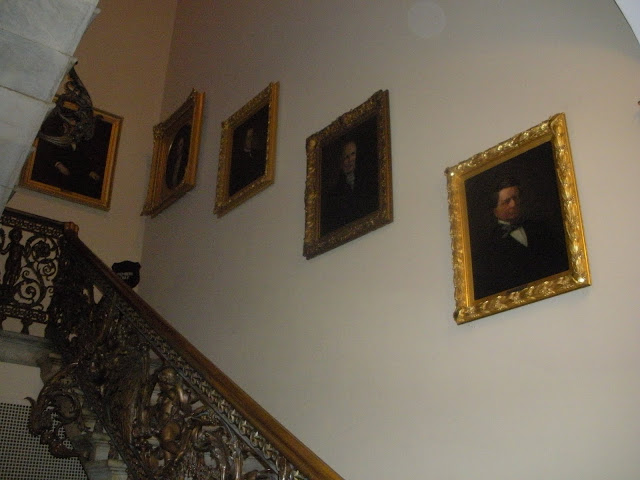 After the house we toured around the Capitol. Always neat to see no matter how many times I've been there. 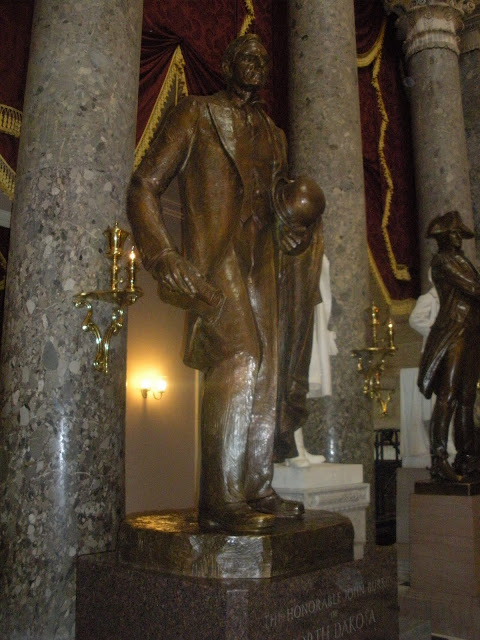 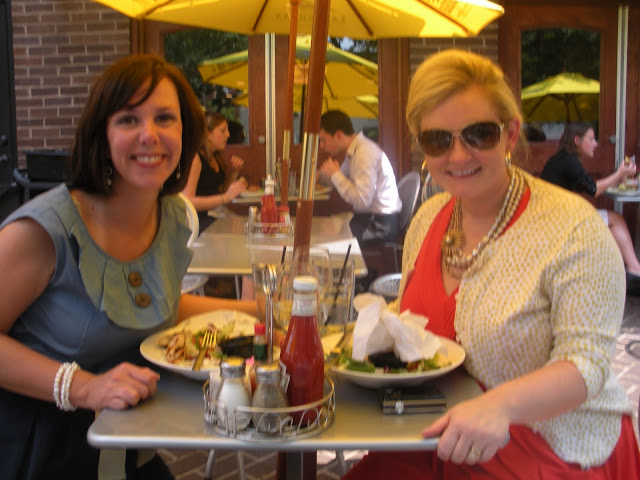 After lunch she went back to work and I headed to the Newseum! The museum of news!  I HIGHLY recommend it for anyone. 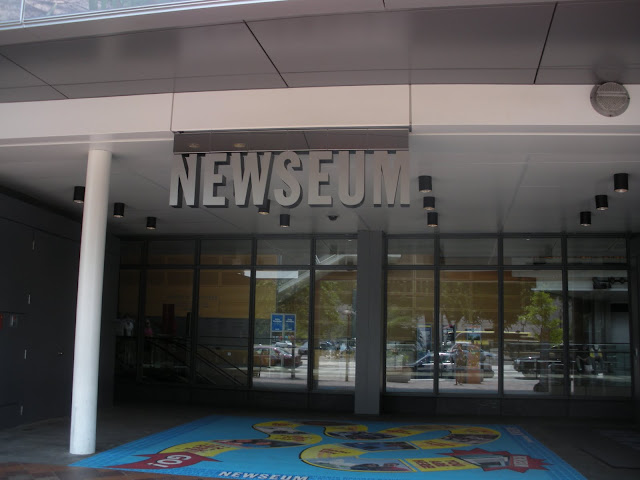 Pieces of the Berlin Wall. 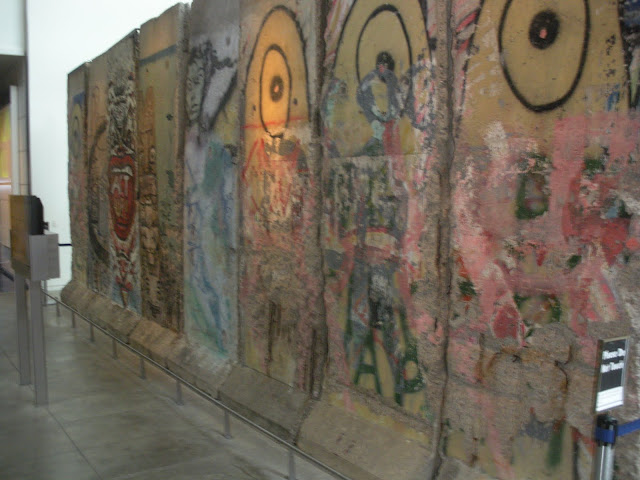 An outside terrace where they often times do live shots. Of course I had to get someone to take my picture. 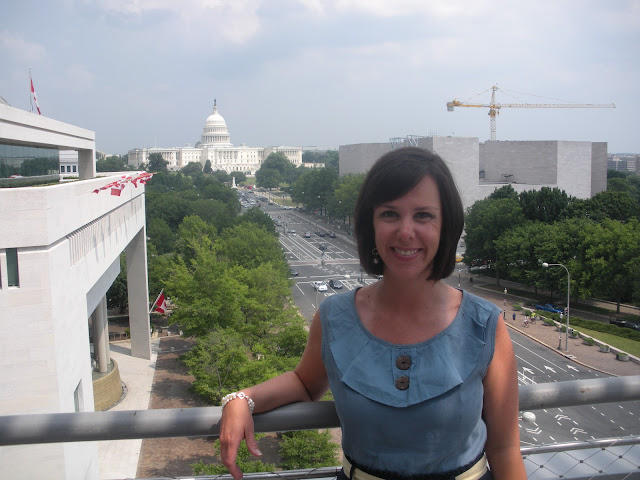 By far the most moving exhibit for me inside the museum was the one highlighting the coverage of Hurricane Katrina.
It brought me to tears thinking back at that time. They had pictures, videos, newspapers, they had it all. 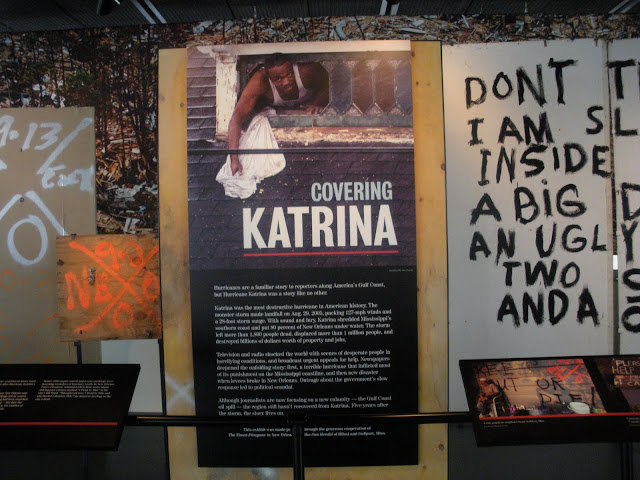 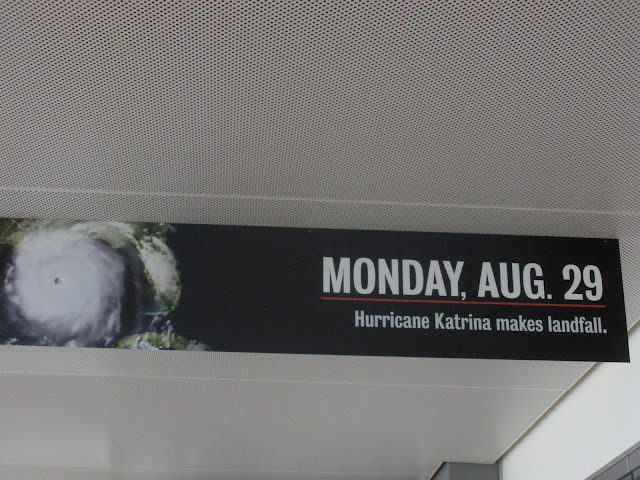 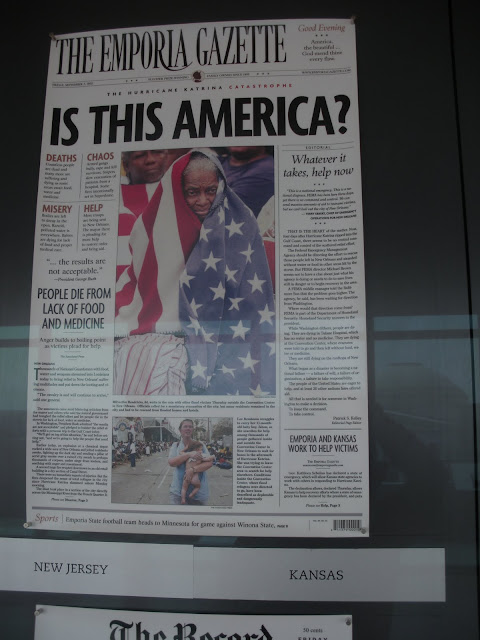 The 9/11 exhibit was also moving.  This was a television tower that was on top of the WTC. 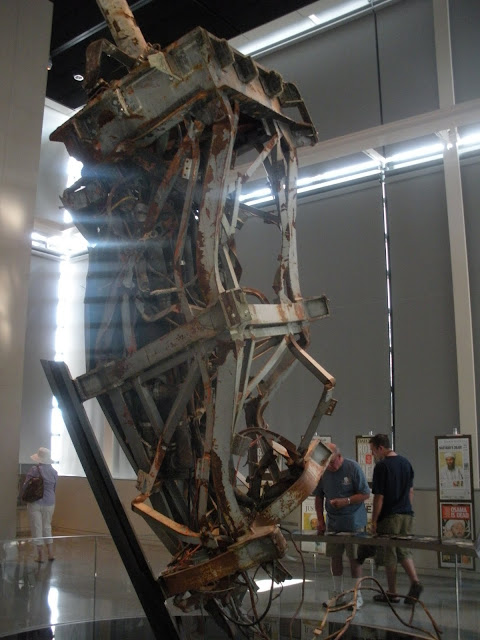 I also got to see the studio in the museum where they tape This Week on ABC. Nice view of the Hill! 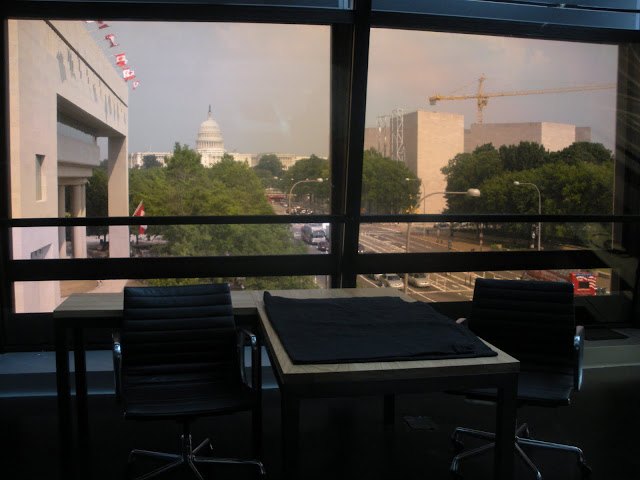 Last but not least,  one of my favorites was the exhibit on the Presidential dogs. 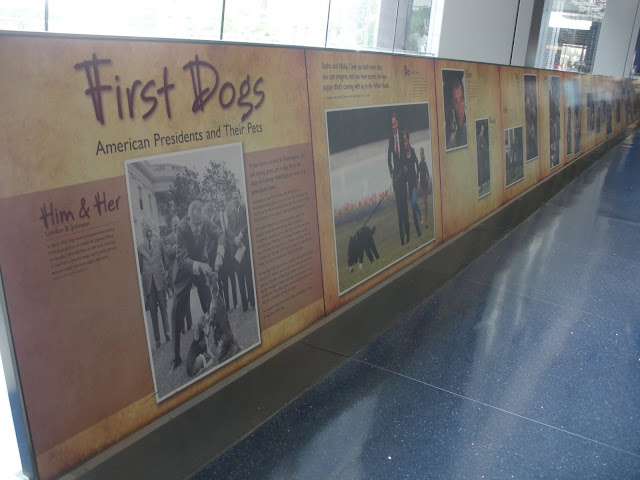 Overall, the museum is now one of my favorites but that probably has something to do with my time in TV news. If you ever get to DC go and visit! 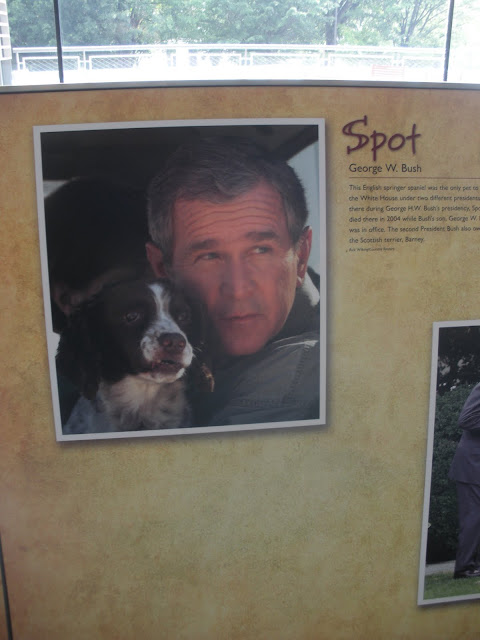 Aside from my time in DC touring around we hung out with friends and of course, the whole reason for the trip -- a wedding reception in Georgetown on the water.
Super nice! 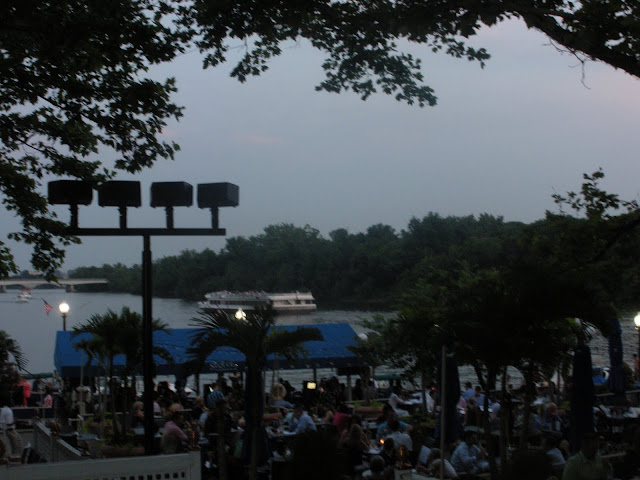 I didn't take a lot of pictures. I just wasn't in the mood.  But, I did get a couple with friends. 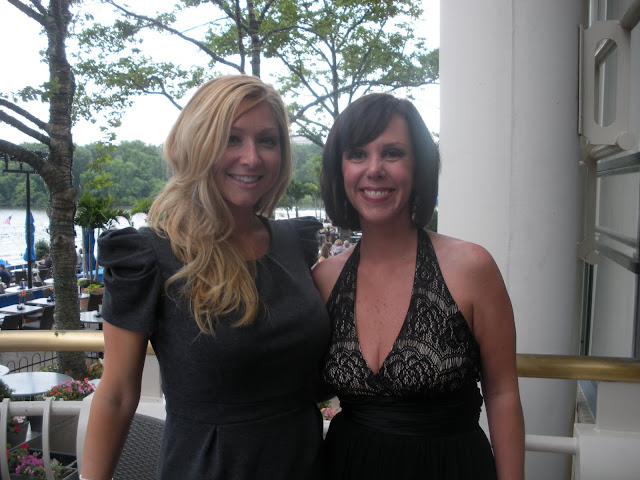 And, of course the bride! Congrats to Kristen and Geoff! 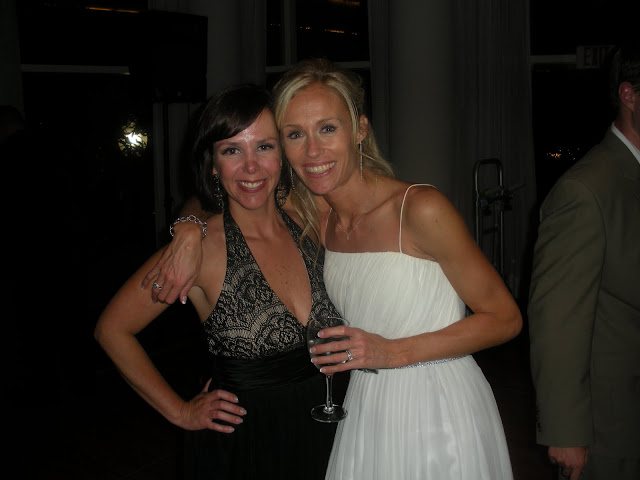 Now we're back home and getting ready for a full week at work which we haven't done in a while giving our trips and the holiday.
Also, I'm getting ready for tonight's OC Housewives Reunion show!
How was your weekend?

You look awesome and looks like a great trip! Love the pic of W and his dog!

I LOVE visiting DC..though I never could live there! That Newsmuseum looks so cool--I'll have to check it out next time I visit!

So fun! Love the dress.

Your dress is gorgeous boo! Love all the pics, I want to go to DC someday! It's beautiful!

Looks like a great weekend in DC. I will have to check out the Newseum. Looks like you spent some time on the waterfront...Sequoia? xx

I'm loving the Newseum - right up my alley and definitely on my list now! Trey has never been to D.C. and I've only been once, so we've got to make a trip soon. The FBI building is one of my favorite places to visit! Scary...but cool.

Looks like a great trip. Love your dress and love the brides dress too! Glad you had fun!!!

I admit it ... I've never been to DC! Your pictures are really making me want to go -- it looks like you had a GREAT time.

i havent' been to DC in forever, since a kid really. i need to go back and view things from an adult perspective.

Gotta love DC! I'm up there all the time!

I love DC. One of my best friends lives there. It has been over a year since I was there last. I think I need to go back soon.

the newseum looks amazing. I havent been to DC in years, and I really want to take Andrew. He has never been of course. What a cute pic of GW and Spot- I think he is handsome, and I dont care if anyone wants to make fun of me for that :) So fun you got to meet up with a blog friend. I love reading about blog people meeting :)

I went to DC in the 9th grade with my school choir and loved it. I really want to go back as an adult.

Ohhh cute dress at the wedding. I love DC! I need to visit soon!

AWESOME pics! Thanks for sharing and letting us live through you:)