We had a great time this weekend in Myrtle Beach!
It was a spontaneous trip which even makes it more fun.
We decided on Monday that we were going.
I had only been to MB once before and it was brief.  We stayed in N. Myrtle Beach too.
Brad used to go all the time as a kid and has done a few golf weekends down there but it's been a few years.
We took Friday off so when we got down there our room was ready.
We only had to wait 20-minutes so we enjoyed a fruity drink at the Tiki Bar on the beach. 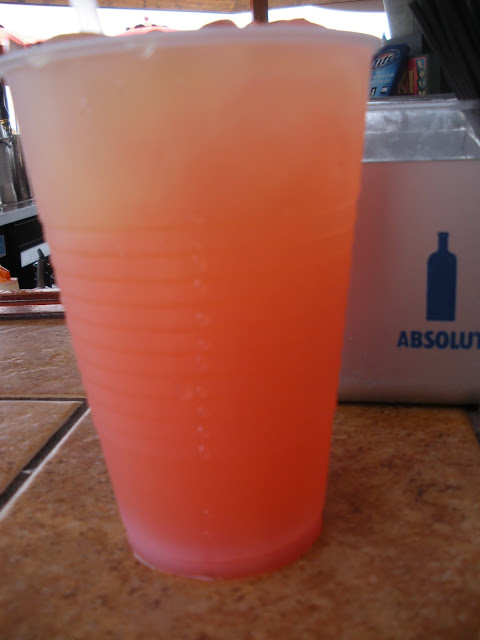 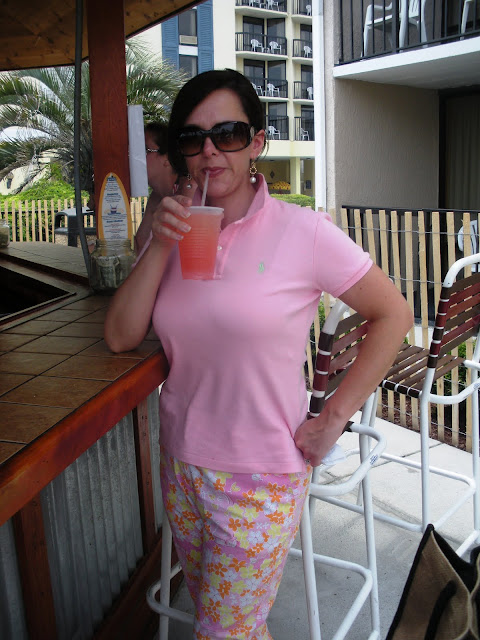 Our hotel was cheap for being on the beach and a lot better than I had expected.  I'm totally writing a Yelp review.  Don't get me wrong - it was not new but it was clean and not totally run down. 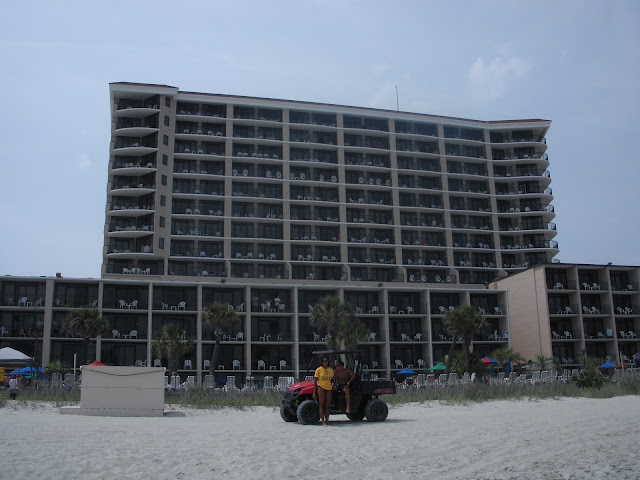 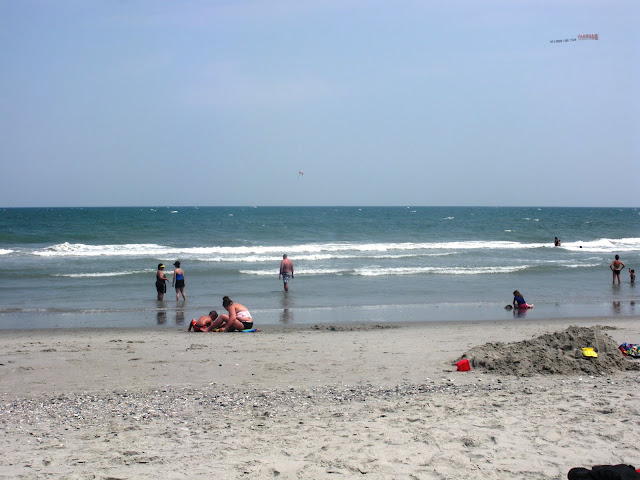 Then we hit the beach! Good times! Brad and I realized on this trip that it's the first one in a long time(except Charleston) where we've been by ourselves without a wedding, event or something else.
Brad even joked that we should tell people we were on our honeymoon.
LOL! 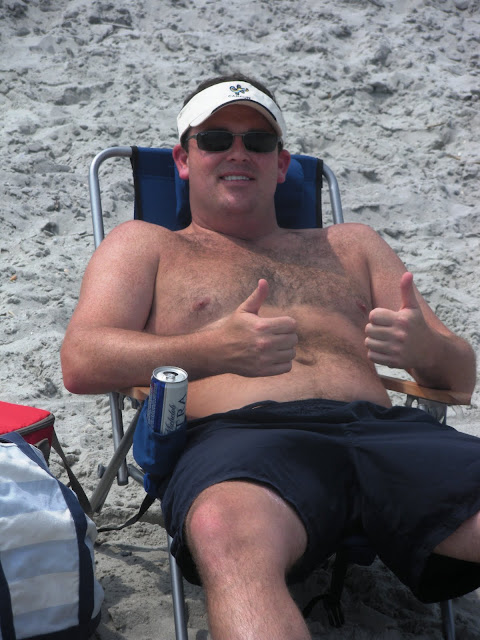 Since it was last minute and we weren't looking to spend a ton of money - we picked an ocean view room instead of oceanfront.
This isn't too bad.  I was expecting worse. 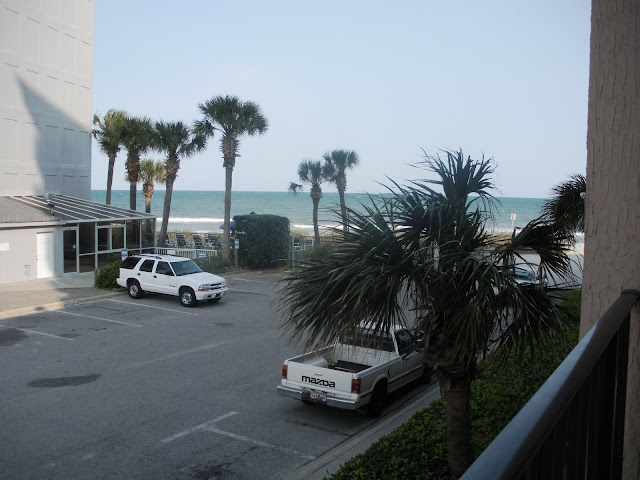 Here's a question for all you bloggers that aren't on the East Coast.  Do businesses do this on the West Coast? I believe I remember them from my days on the Gulf but it's been a while.
Brad and I were talking about it and I thought I would ask since they are so common here in the Southeast.
Everyday around lunch and dinner time we would see 4 or 5 of these. 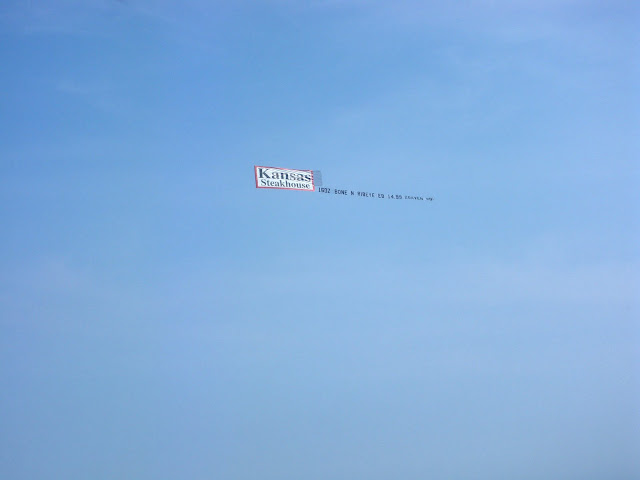 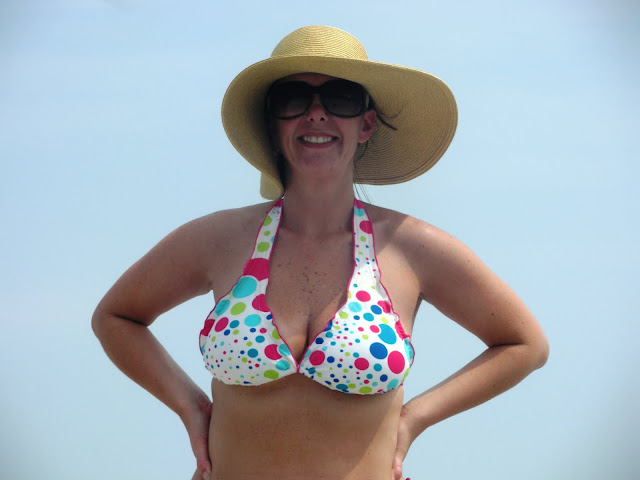 The part of Myrtle we were staying in was overrun with these ice cream men.
Tons and tons and even in the morning around breakfast.  Seriously? 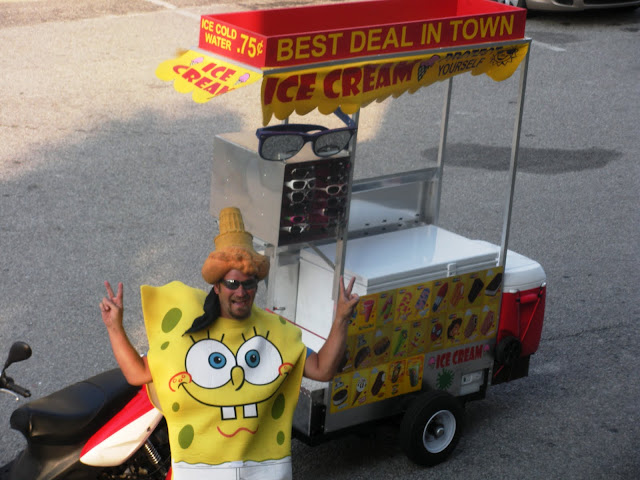 Our first night we went to Broadway at the Beach.
I'm not sure I had ever been here before but it reminds me a lot of Pleasure Island in Disney World. Restaurants, shows, night clubs, shops.  You name it.
We ate at Landry's - which I'm familiar with being raised in Louisiana but this particular one? NOT GOOD! The service was terrible and the food just okay.
I will be writing a review on this location. 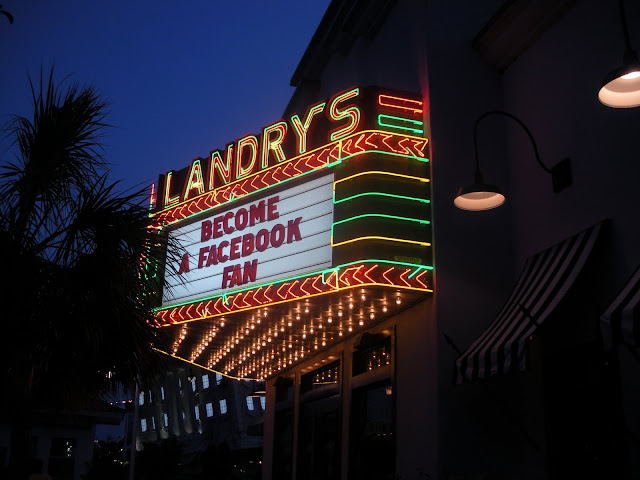 They have a big Ripley's Believe or Not there too.  No, we didn't go. 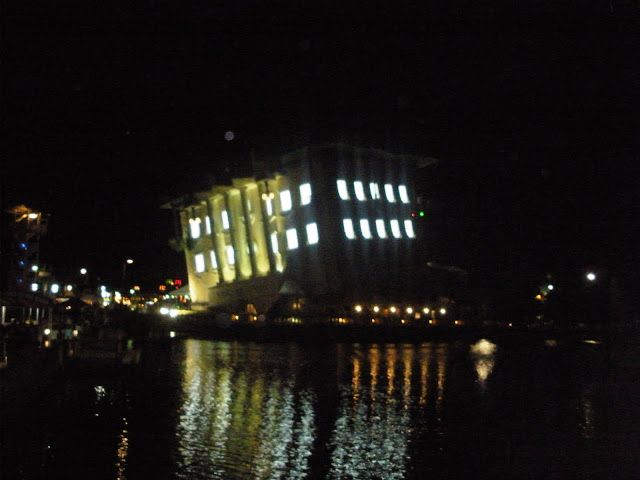 I had to take a picture of this shirt hanging in one of the store fronts.  For those that have been reading this blog for a while know, I'm not a fan of these family stickers on the backs of people's vehicles. There seem to be more and more of them now and I have even seen one with a girl and her dog. WhatEVAH. 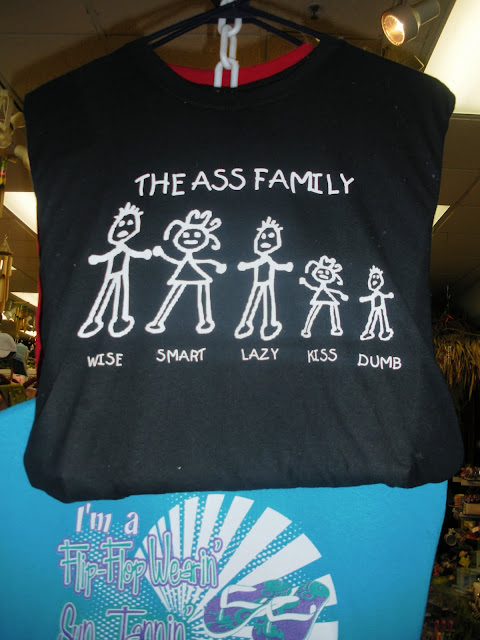 The next morning we go up and hit a few of the cheesy beach shops that every beach town has. 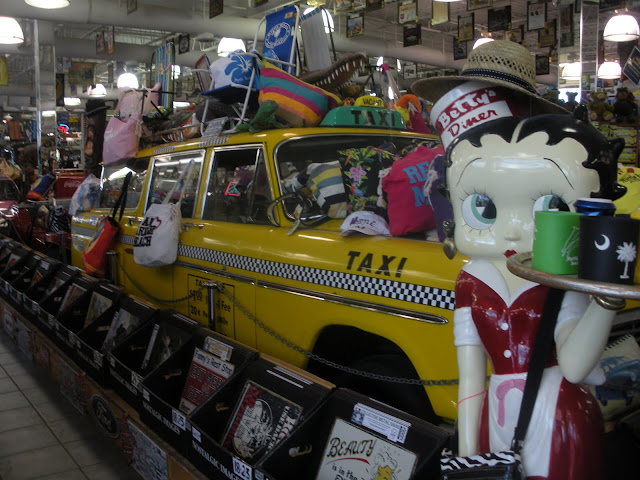 I had to take a picture of this.  We miss Buddy but he's having a good time at the lake with his Grammy and Papa. 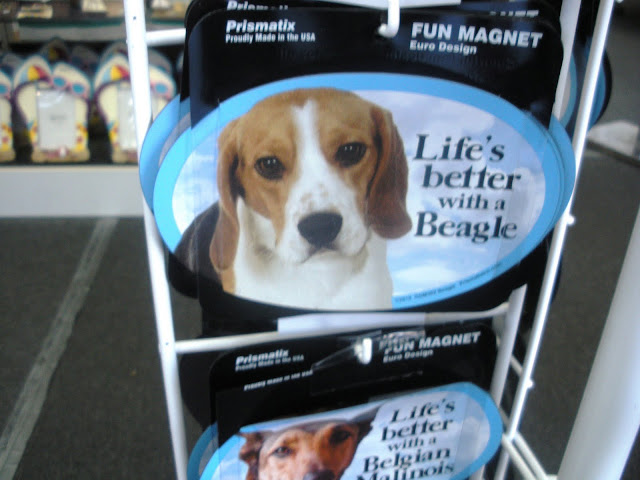 Saturday we spent all day on the beach! Great weather and we even got to know our lifeguard a little bit.  Super interesting to hear about these seasonal life guards.  They basically work through a company who hire college kids and it's a program where they live down there just for the summer. 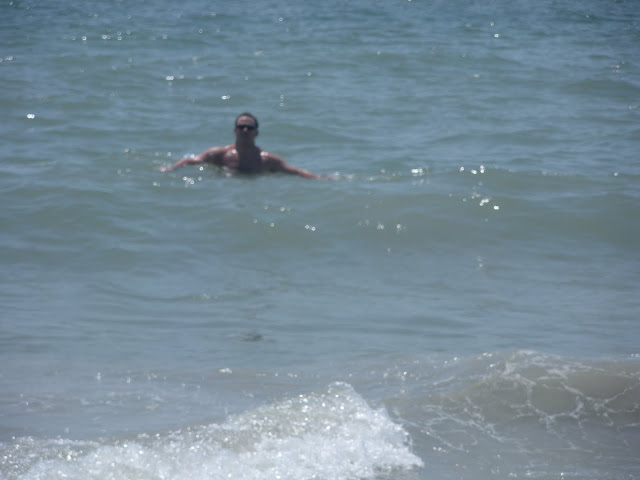 Later in the evening we enjoyed dinner at Sea Captain - which is one of the oldest restaurants in town.  I had been there once before. 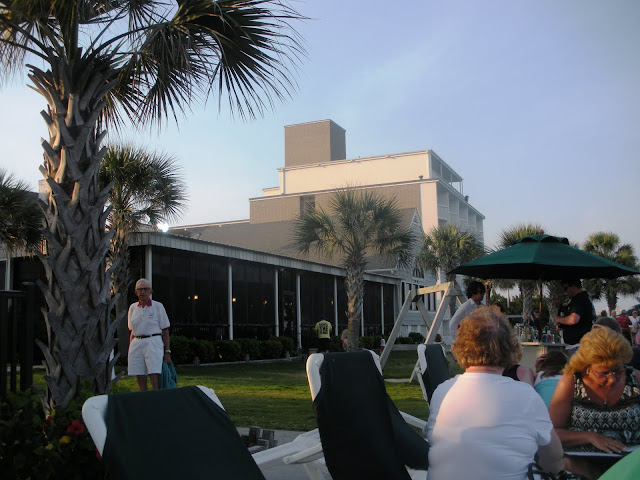 We met another couple from Charlotte who took a few pictures of us while we waited for our table. 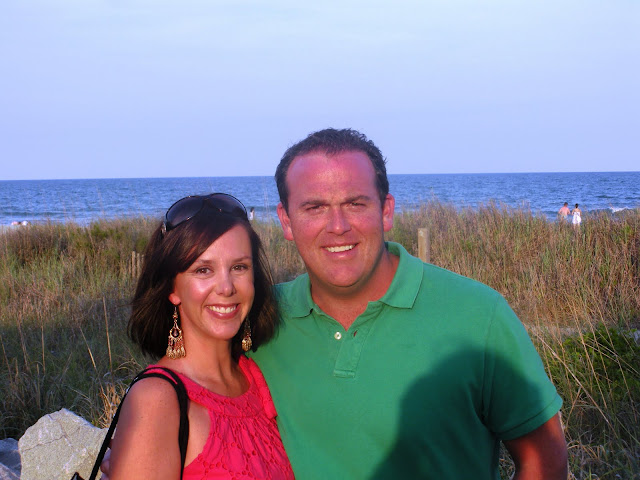 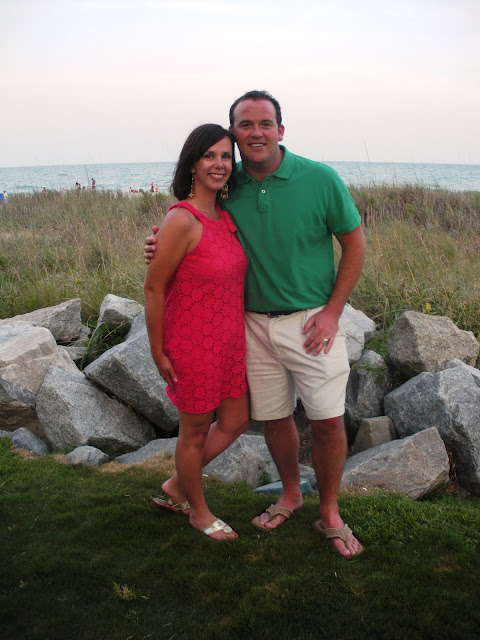 Giving that we were down in the old area we headed to the Strip.  In the past year Jimmy Buffet has bought a lot of this area up and even built a Sky Wheel! Click here to read about it.
The line was long so we didn't do it but we did do a few other rides down there. Pretty fun! 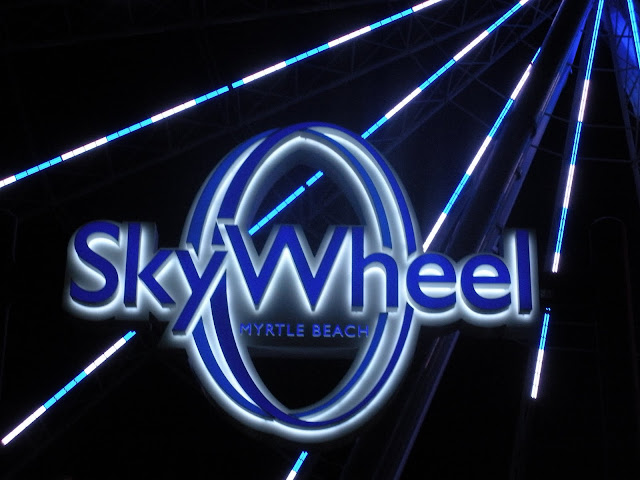 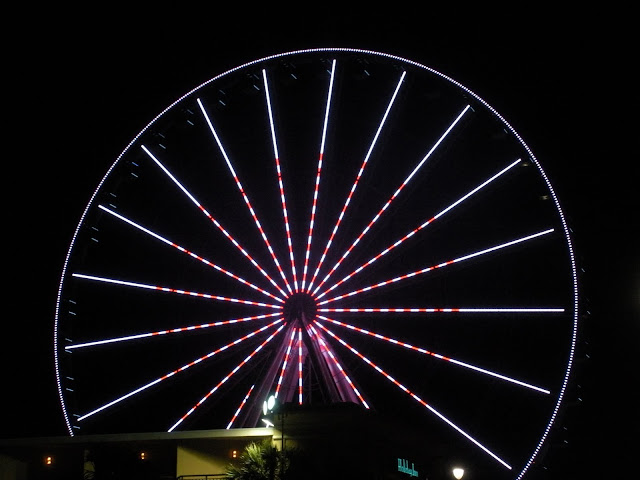 What's even better is that connected to the Sky Wheel, Buffet built a LandShark bar! 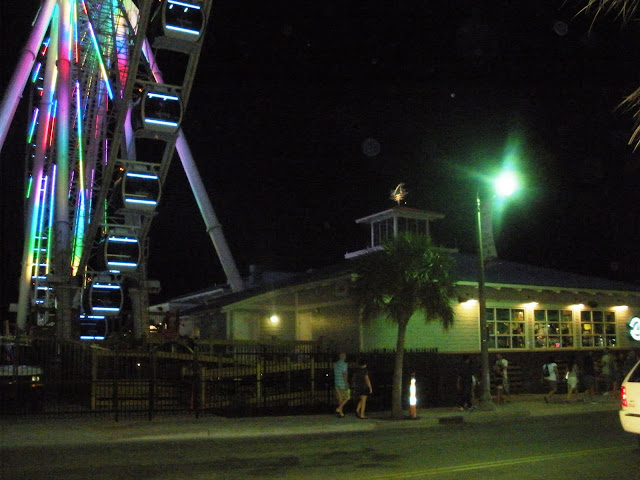 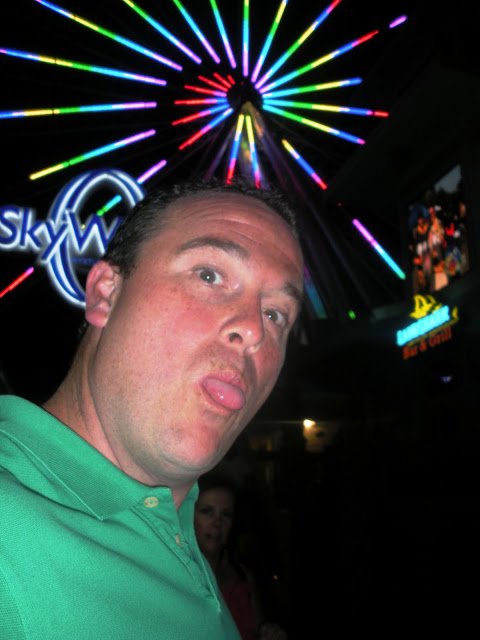 Don't think we didn't stop in there for a beer.  Super cool and fun! 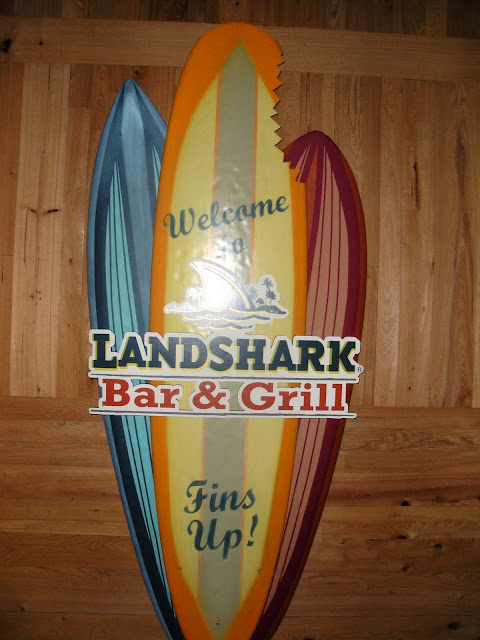 Last but not least -- I couldn't do a Myrtle Beach post without the cheesy t-shirts that some of you may have gotten when you were in high school. 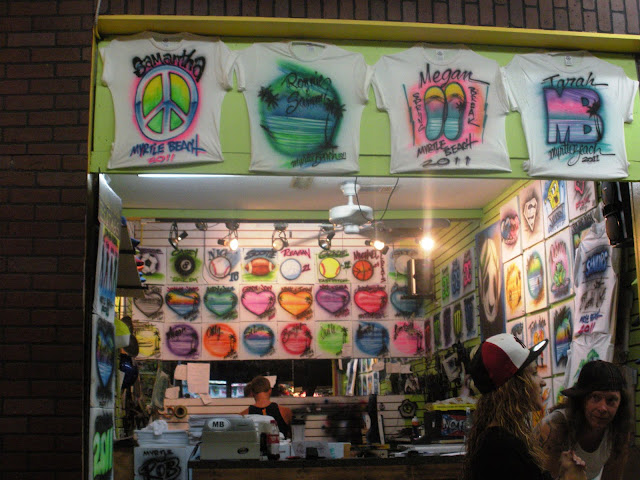 Overall, it was a great trip but not sure we'll back anytime soon because it's a little too commercialized for us. It was fun though and I can see how kids would enjoy it!
The best part of the trip was Brad and I spending some quality time together and talking about our future amongst other things.
We had a really good time.
How was your weekend?

Myrtle Beach is so Jersey Shore of the South, but it truly is a lot of fun! I can't wait to ride the Sky Wheel! And the Sea Captain's is amazing seafood. So yummy!

Love the cheesy t-shirts. MB is kind of like Ocean City, MD!

The cheesy beach shops and t-shirts remind me of Daytona! That's one reason we stay further south. Can't wait we are heading down on Saturday - so wish we had a longer layover in Charlotte so we could visit!!

I've only been to Myrtle Beach once, and I'll never go back :( It was horribly tacky (where we were), and the people all seemed to be there from the Jersey Shore for the weekend. They were actually wearing those airbrushed jackets that say (so & so forever)!

I've heard that North Myrtle is much different than regular Myrtle, and I do have friends that go there and love it. Sounds like you guys did find some fun things to do and places to eat!

At the end of the day, being at the beach itself is magnificent! We were at the lake, but I missed the ocean water just a tad :)

sounds fun! at least you got a weekend away and alone. can't believe they still make those t-shirts!!!

I can't believe they still make airbrush t-shirts!! Do people still buy them? I have not been to Myrtle Beach in 15 years. But I remember it being a lot of fun.

I've only been once but I thought it was too commercialized too! Looks like you had a nice time though.

Yes, we have the planes with signs, too. Last year, while in La Jolla on vaca, Jack remarked, "Hey, Mom. Wook at dat plane hauling dat junk behind it."

do you know i have NEVER been to myrtle beach?! i have heard stories! i have always wanted to go b/c of shag the movie. :)

We were in Charleston last week - so close! I haven't been to MB since my senior week after high school. Glad y'all have fun....can't wait for Friday!

Don't you just love spontaneous trips? I remember one weekend when I was 5 and my mom was out of town, my dad and I spontaneously packed up and headed to VA beach (we live in Richmond)...I was so confused and kept asking him if we could just go at the last minute. I'll never forget that special trip, though! I just found your blog and can't wait to read more! Please stop by mine!

LMAO had to pass this along to my co-workers. We discuss stick people a lot! Love the pics. Hope you are having a good day.

HOw fun!! I havent been to MB since my 2nd year of college. Andrew had to work there a couple years ago and he was amazed by it. ha Not sure what they got into down there. I have the same JR sandals on today that you have on in the pic of you in a pink dress :)

I do enjoy Sea Captain's House!
When we go there we always stay in NMB. It is a tiny bit less commercialized, but not much. I much prefer Holden!

Dee what a great getaway, I love the beach!! I can see you all had so much fun!!

Be sure to come & send your friends to enter my amazing Giveaway from Tracy Porter!

Sounds like a nice weekend on the beach! We are counting day the days until my feet touch the sand.

I am with you, I HATE those stickers :p
{all variations!}

Awesome! What a fun weekend. Love all your pictures and really love that pink dress you're wearing!

What a great time! Spontanious trips are the best!

Love your little fushia dress! Myrtle beach totally reminds me of the movie Shag ;) Looks like a fun trip!

How fun! We've taken my niece to the beach (NMB) the past few years. This year we're going to tackle it with both her & my nephew, but we're heading to Hilton Head. MB is perfect for people watching!!

p.s. less than four days to get your entries in for my huge Whiting & Davis giveaway! a handbag of your choice could be yours...don't miss out :)

Thank you very much for this blog.
I may add that in this new bad economy, that
like minded people like you and many other airbrushers,
pinstripers, and custom painters, and me have felt alittle of a jolt.
airbrush t-shirts