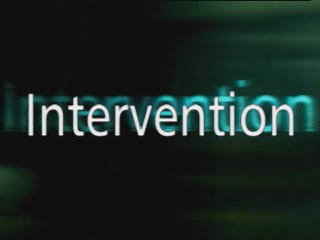 Why oh why do I watch these shows like Intervention on A&E? Does anyone else watch it? The new season starts next Monday but last night I was up until 11pm after getting sucked into watching back to back episodes.

Then....I go to sleep thinking about all of this.

Last night's 2nd episode featured a man named Brett who was an alcoholic who lost his family and job to booze but refused to go to rehab until they threatened to hospitalize him.

He got sober, much to his children's delight, but 80 days into treatment they found out he had cancer and went home and died 3-weeks later.

The show ended with his son(who appeared to around 11-years old) saying that at least his Dad didn't die an alcoholic but instead he died a Dad. It broke my heart.

Did anyone else see this episode? My Mom has preached at me through the years not to watch trash like this because it's depressing and it does nothing to help foster a positive attitude.

Another show I find myself watching is Hoarders(also on A&E). My blogging friend Mrs. Lenzer talks about this on her blog today saying she can't get herself to watch it.

So..why..why?? do I watch this trash if it does nothing but make me sad?

I didn't watch last night but I have seen that episode.

So sad, his kids loved him so much and he was just so depressed. Ugh.

I have seen every episode. Sylvia is my favorite.

Sylvia lives here in Charlotte.. I've seen her before walking around my old hood.

I've watched a few of those episodes and they're always heartbreaking!!

One thing I've learned about myself is that I can't watch stuff like that all the time. If I do, it consumes me. Pretty much why I can't even watch the news anymore.

i like hoarders...i don't know what day it comes on but just happen to catch episodes...it's fascinating...i don't understand how they live like that...

Wow - no I haven't seen it and I think i agree with your mom! I have watched hoarders before and it makes me sick - but like a bad disease I watch it if it happens to be on and I am flipping through the channels.

Yes, I watch it too. Yes, I cried over that episode too. No, I can't explain why I watch it. It's like the worst train wreck ever. These lovely families (some of the time) whose children or loved ones have just gone off the deep end and become a wreck. Why would I want to even think about such things?

Apparently WE need an intervention.

PS..no Hoarders for me. Not sure how I have managed to avoid it, but so far so good!

you redid your blog!!!

i started to watch on the plane but fell asleep!

I watch that show every Monday and I love it!! I think I watch it to prove to myself that every single day people do things to over come their obstacles and addictions and get better. Their stories are truly remarkable because it shows that if you truly want to change, you can, it's just up to you. I think that's how I feel about Extreme Makeover too. I cry every episode!!

I have watched it before but didn't see that episode. SO sad.

it's addictive, I tell ya. But they know it, that's why the shows succeed. We all like to see others mis fortune I suppose. I don't mean that in a bad way.

OMG!! I haven't seen that one...but I LOVE that show, Hoarders, and Obsessed. The Hoarders makes me the most nervous!

I can't watch those shows....they make me mad. Then I feel bad for getting mad. It is a vicious cycle...so I don't watch.

I watch 16 and Pregnant and I can't help it. Honestly, there are two reasons behind it a) it's like reading a romance novel...just something mindless to unwind and b) it DOES foster a positive attitude because I'm always thinking, "at least that's not my life".

My parents always yell at me for watching trash shows. I don't watch intervention all the time...but, there was one where the woman was drinking mouth wash and passed out on her front yard and her kids were just walking around her. Ugh.

I watch shows like that all the time. Gives me a little boost to know I'm not a complete fuck up. Kidding....kinda. I finally stopped watching Real Housewives. I'd rather watch someone go to rehab than watch women be catty!

aw thats okay! we all have our guilty pleasures. haha. :)