If you've been following this blog long you know we don't live in a house with a yard.
Gosh, we wish we did, but we met and got married at the very wrong time in life(and this country) and we both had already owned our own condo/town homes.
.
It could be worse though, we couldn't even have a home!!
Right!!??!!
~~~~~~~~~~~~~~~~~~~~
Exactly!
So, I'm not complaining too much.
We'll make due until the time and economy is right for us to make a move.
~~~~~~~~~~~~~~~~~
I gave that background because instead of a backyard we have a back deck.
It's not huge so we've kept it simple the past few years.
I had this set at my previous place so I just brought it over and it's been fine for us the past few years. 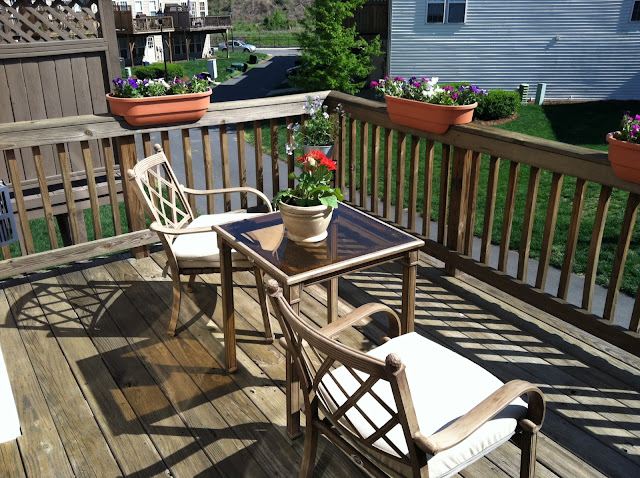 Well, now that we have Shelby we want to sit outside and that little set just wasn't doing it.
She sits in her Bumbo right now and that little table isn't big enough for that and other items.
Not to mention, it's kind of hard for us to eat outside.
So, we went in search of patio sets.
AGAIN....
Our deck isn't big enough for some 5 piece set with loungers, etc.
Everything we found that would fit just looked cheap and didn't fit.
Plus, I wanted an umbrella to keep the sun off Shelby.
We both got frustrated and bought an umbrella and stand.
I told Brad I was willing to wait until the end of the season to find what I really wanted at the right price.
That's when he came up with his own idea.
MAKE A TABLE!
So, he took a Friday off work and was on a mission.
He found a pattern, measured our patio for the exact space we had available when chairs were in place, etc. and went to the hardware store.
With measurements in hand he had Lowe's cut the wood he needed in the measurements needed. 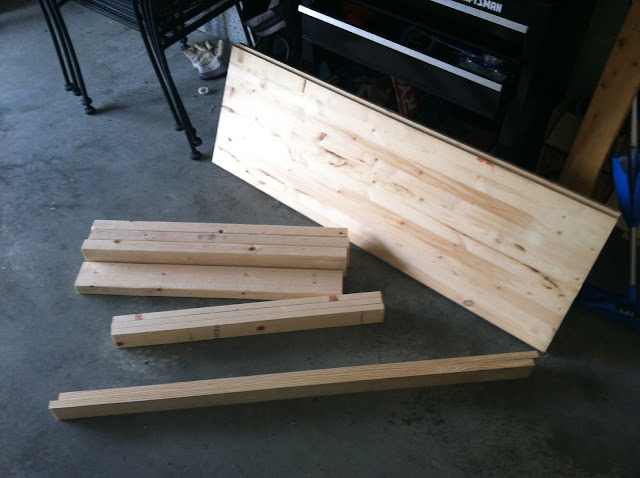 With a drill and screws. 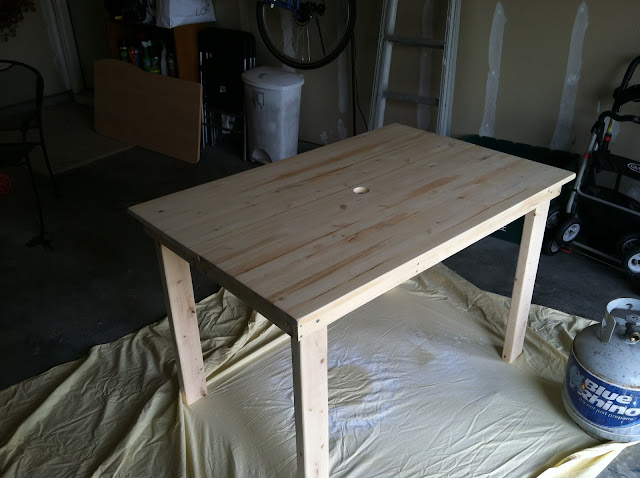 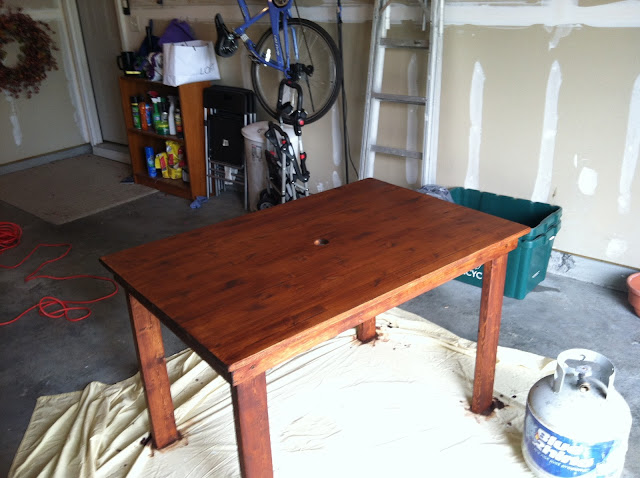 We had a patio table!
The whole project was very affordable compared to buying a comparable table.
The umbrella we had purchased the week before fit perfect after Brad measured and drilled the hole.
Brad's next project??
Chairs to match! 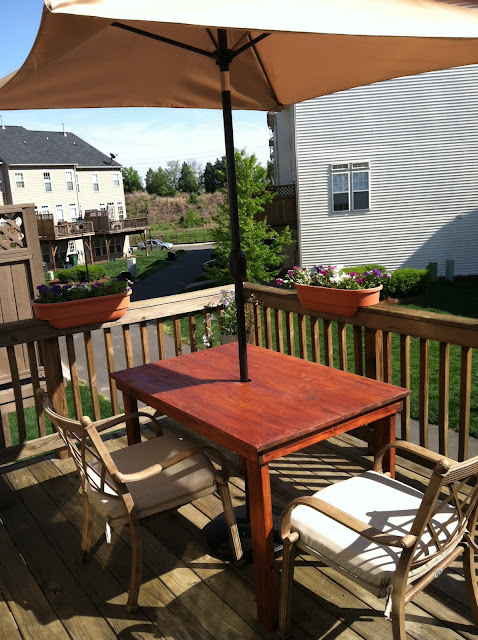 All in time...
Until then, we'll enjoy our outside time with what we have. 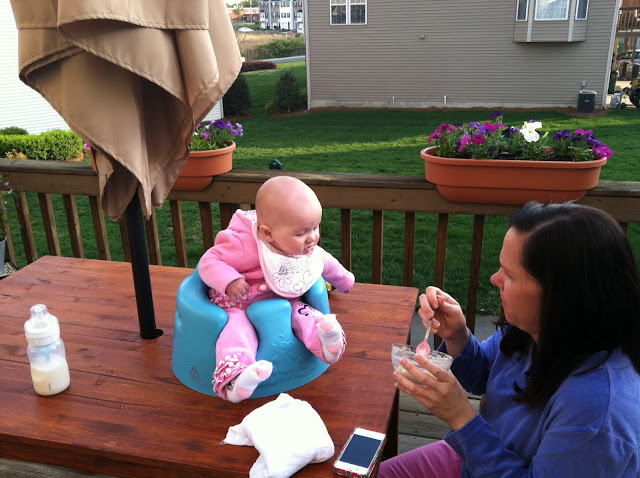 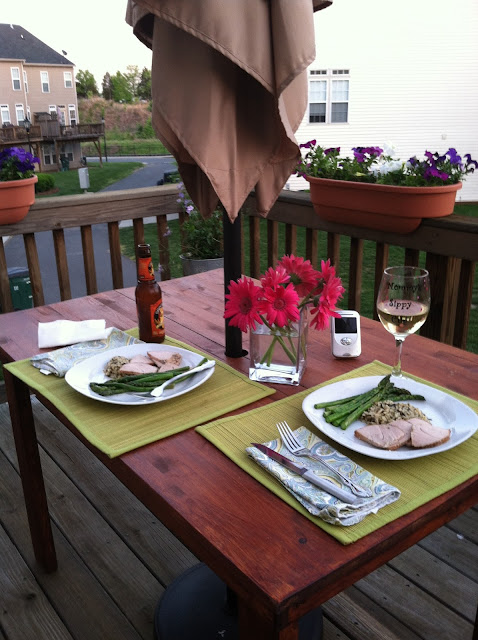 wow I'm impressed! Your hubby is much handier than mine, nice work!!!

He did such a good job! Very very impressed. Where did you get umbrella? Your post reminds me I need to pick one up.

good job Brad. Great color and addition to your patio!

Dee!! This is so gorgeous!! ❤ I absolutely love it. Love out handy husbands haha

I think that looks perfect! And kudos to Brad for making it!

i wish i had a townhouse condo - i bought my home in the high market and was impulse buy (i know exactly the WRONG way to buy a home) - so now i want to sell and move - but i can't get CLOSE to what i paid and put into it :o(

the babes is SO adorable on the deck!

Send Brad out here to give Dennis a lesson!! Looks awesome!!

Looks great! I'm forwarding this to my husband... maybe a little motivation!

Looks wonderful! He did a great job!

I cannot believe how good it turned out. Can't wait to come eat at it.

OHHH!! it came out so nice! Way to go Brad! And, I thought you just lived in town house becuaes that is city living!

Table looks great! Could be worse....you could be in an apartment like me with no patio or deck.

Love this!!!!! Blake is super crafty and does all sorts of home projects. Saves money and it all means so much more when it's done like this. Kudos, Brad!

We need a new kitchen table and I love that style...wonder if I can convince the hubs to make one??? Or if Brad wants to come to Texas...haha!

That is cute, Dee. He did a great job!

That is fabulous! What a great idea to make-do until you find what you want!
Laurie
Lulu and Daisy