One of my best friends posted pictures of her step-daughter, Kate's bedroom a few months back and I couldn't believe what I was seeing!!
A Paris themed room that any teenager, or adult, would kill for!!
I asked her if she would mind me sharing and she said no.
Lucky for you all!!
~~~~~~~~~~
Cathy had a baby girl about 7-weeks ago so when they were planning for her nursery they decided to give Kate's room a makeover at the same time.
She and her husband had just returned from a trip to Paris so decided that would be a fun theme.
Kate picked out bedding that she wanted but Cathy took a little bit of the creative responsibility to make sure the room went beyond her teenage years.
Here's what they ended up with.
~~~~~
While visiting Paris, Cathy and her spouse rented an apartment.
They took several pictures outside the apartment's windows.
So they decided to incorporate those into the look of the room.
They live in Las Vegas, so they worked with Screaming Images there in town to have them take them pictures and turn them into wall murals.
How cool is this picture of the Eiffel Tower behind the bed???
~~~~~~~~~
Keep in mind, Screaming Images even came and installed them in the room.
This is not something you would bring home and attempt to do yourself. 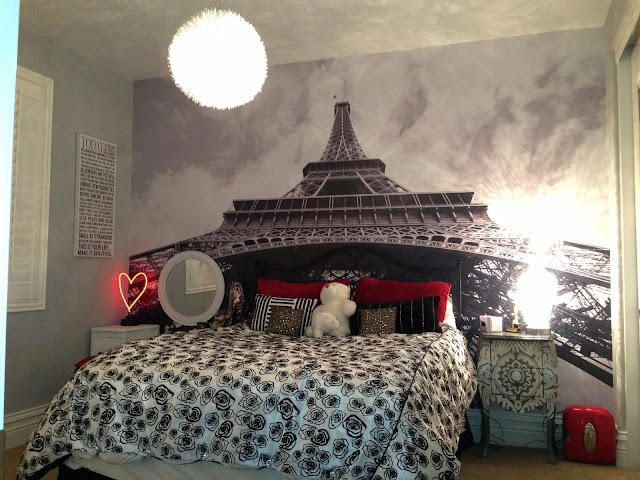 As they were picking out the images they decided to make the panels on the closets look like windows to make the room feel bigger.
They decided to keep everything black and white to compliment the grey walls and keep a calming effect in the room. 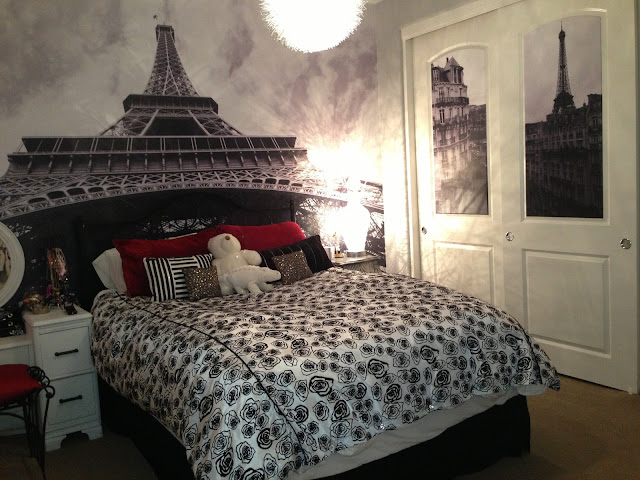 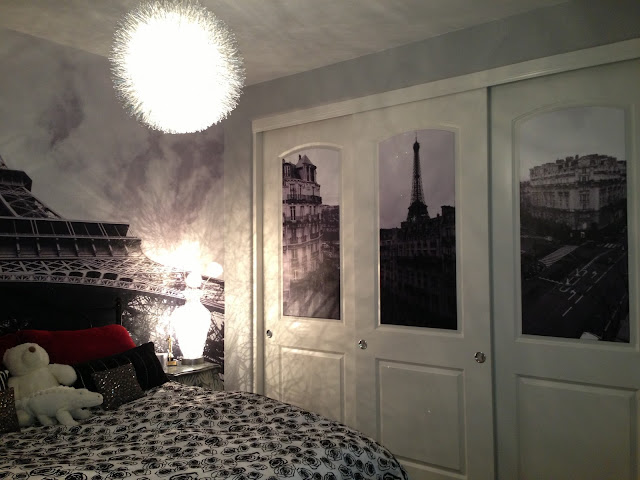 Since the Eiffel Tower was such a big image on the wall they knew they needed a headboard that they could see through so it didn't cover up the image.
They found this one at Pier One on sale, and the wrought iron goes with the Tower structure.
The comforter duvet was found online at Wake Up Frankie and the bedskirt is from Target. 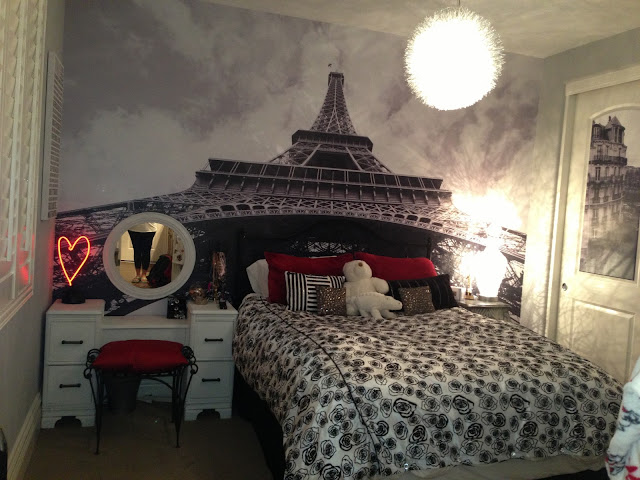 Next they decided to include a vanity in the room for 14-year old Kate since she would soon be sharing her bathroom with the new baby.
They had a hard time finding an afforable one and finally settled on one they found on Ebay at a local Las Vegas consignment store.
It was green, so they painted it an antiqued cream white. 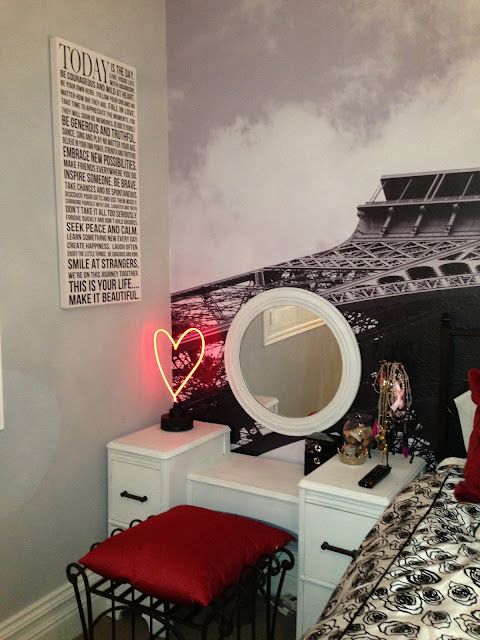 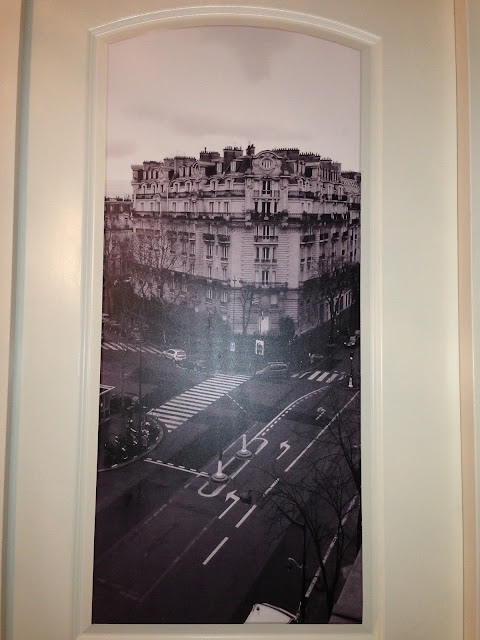 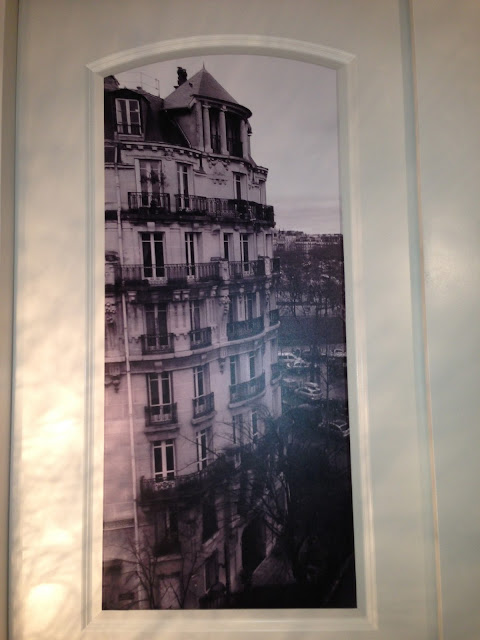 The shelves in the room were already there and just got a fresh coat of paint. 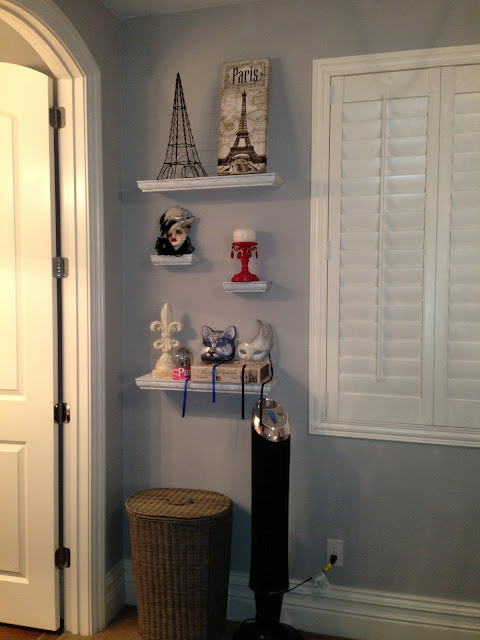 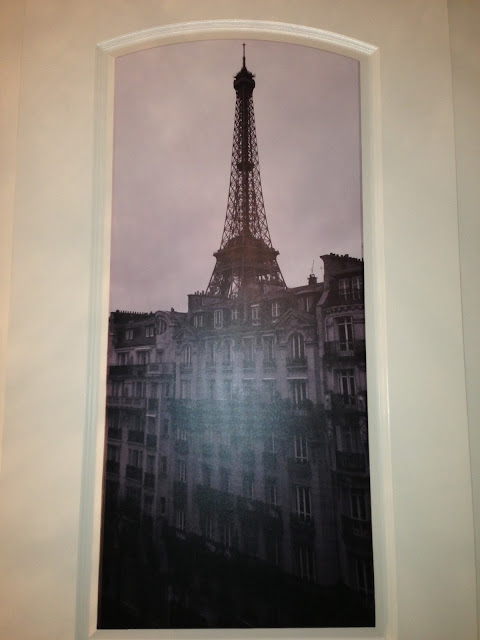 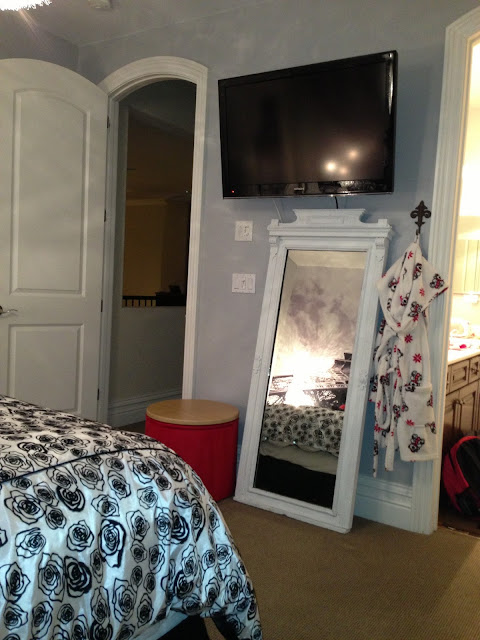 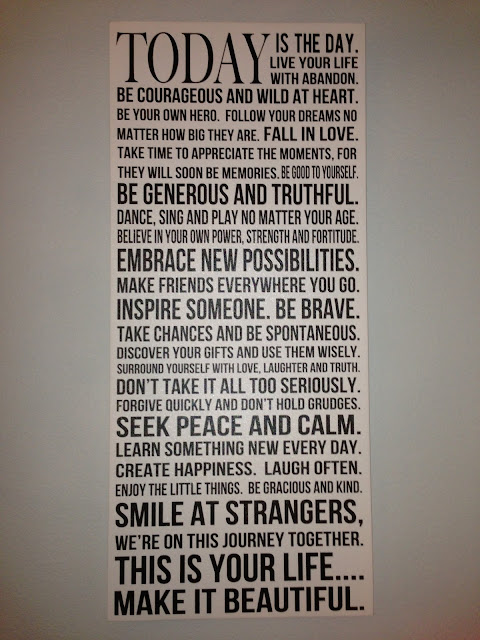 They had originally purchased a red chandelier for the room but when it arrived it was broken.
They tried to exchange it but it was discontinued.
So, they went to Plan B.
They found this chandelier and the lamps in the room at a local consignment store. 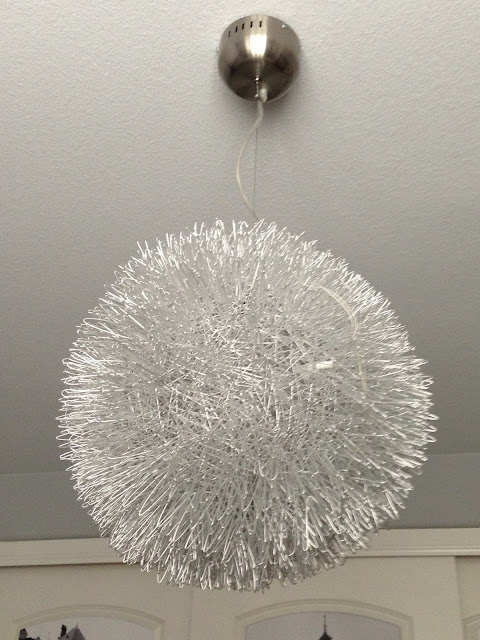 I think this is the cutest and most original idea for a teen's room I've seen in a LONG time!
I'm so happy to be able to share it with all of you!!
It's totally one of a kind! 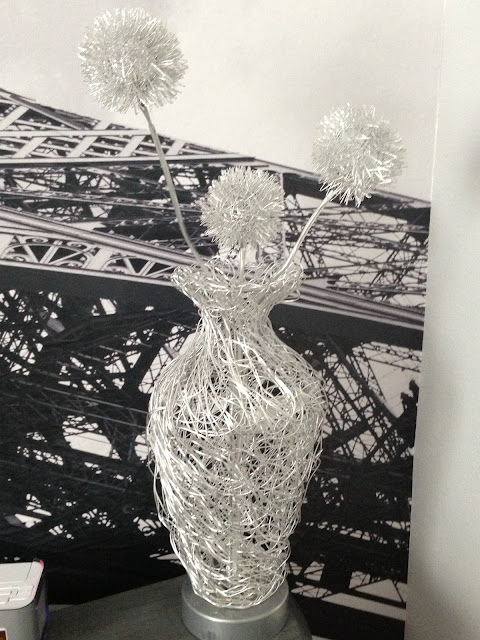 WOW - now that is serious - what an awesome job she did!

this is so cool!! Very nice! lucky girl!

Love it!! You have some talented friends!!

Holy cow!! I would never leave, that room is like a vacation!

Wow! What an amazing room. I would feel like I'm in Paris everyday if that was my room.

Seriously, this is AMAZING!!

Wow, that is so amazing!

Does she have a dresser?

My jaw hit the floor. This room is insane! Seriously, it's incredible. That sweet girl must be loving it!

What a fabulous room! So creative!
Laurie
Lulu and Daisy