Done with the swaddle!

I'm happy to say we've been done with the swaddle at night for one solid week!!!!
WOW!
I had such anxiety about getting rid of it because there had been several nights where she had broken out of it and cried until she was tied back up.
But last week was a rough week around here.
~~~~~~~~~~~~~~~~~
Not going to lie, I was depressed, frustrated, felt hopeless about being a good Mom-- all because Shelby was fussy all the time and waking up at night again.
~~~~~~~~~~~~~~~~~
I asked myself, 'what is wrong with her??'.
--Could it be that we started solids and they aren't agreeing with her?
--Is she not getting enough food?
--Is she just tired and fighting her sleep? It seemed that way because she was avoiding naps.

I talked to friends and her nursery school and they all said it's because I was still swaddling.
(keep in mind Shelby naps at school in a crib without swaddle or sleep sack and sleeps on her tummy. This has been going on for weeks.)
I emailed many of you and asked advice on signs they're done and how they went about the transition.
Finally, I just went for it last Thursday.
Brad was NOT a fan of me doing it on a work night but my gut told me it was time.
Well, guess what???
Ummm..
Girlfriend was all over the place!
~~~~~~~~~~~
She always starts out the night with her hands up. 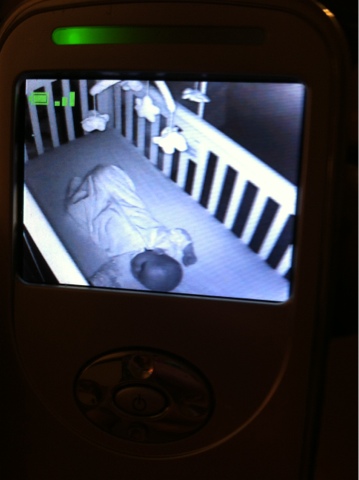 Around midnight or 1am she rolls to her side and sucks her thumb.
UGHHHH..
I'm thinking she is indeed a thumb sucker.
Upsets me because as I've said before I was a thumb sucker until 8 and wore braces for years because of it. 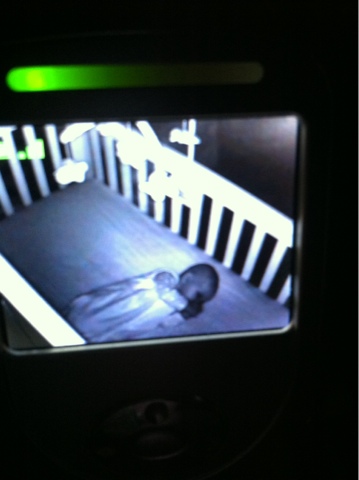 Then eventually she rolls to the other side or her tummy.
It just depends. 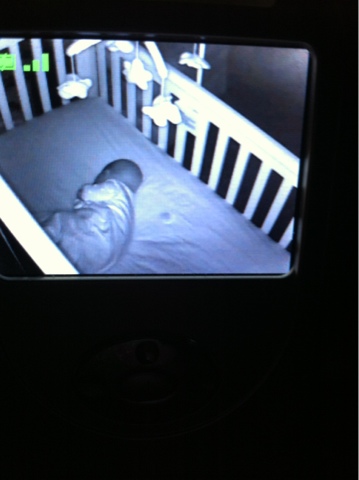 We are keeping her in a sleep sack at night because her room gets chilly and there's not a lot we can do about it.
She's able to roll her in sack.
As for Shelby's demeanor since ridding of the swaddle??
A million times better!
Happy!
Sleeping through the night again!
Napping in her crib for hours during the day!
and smiling all the time again!
Now, that.........
Makes Mommy and Daddy HAPPY!!!!!!!!!!!!!!!!!
If you have any questions about ridding of the swaddle let me know.
My advice is -- there's never a good time to rid of it.
JUST DO IT!
;-)

It is so hard when they are happy, sleeping well and then the next day they are not. It happens. Going through it now. And even the 3 sometimes still wakes up asking for us.
Anybody that says their kid has never woken up and sleeps through the night ALL the time is lying!!! :).

Go Shelby!!! Wonderful news! She is so cute! Sloan sleeps with his hands up in the air too! My mom says it means a healthy baby!! Sloan hated the swaddle so he was all over the place from the get go! He will literally turn himself the other direction we originally laid him in!!!

We are having nap struggles right now with Drew being able to fall asleep on her own and stay asleep. Right now I'm listening to her scream in her bed but nothing I do works unless I put her to sleep, and I'm not doing that anymore because then she only sleeps for 30 minutes. Doesn't mean my heart isn't broken into a million pieces right now listening to her scream, but it is necessary. Motherhood is hard, huh??? So glad you are trusting your gut. :)

That is awesome! Go Shelby!!

Agreed! I love watching the baby monitor all night, too!

Nice work you guys! Glad she is happy and you are happy!

Yeah so glad it all worked out - you are a fabulous mom!! Enjoy your first Mothers Day my friend!!

Great!! We never really got into the swaddle she was fussy period lol! I just love watching how cute they are when they sleep!

Way to go girl! Our little guy was the same way :)

How aren't we friends in real life? I sucked my thumb until 8 too and had braces for years too! How funny. :)

Awwww! Shelby is too cute! I went through Sydney being a bad sleeper for 2 1/2 years so I totally understand! I am so happy that removig the swaddler helped! Sydney never really liked hers.

who would have thought that something so simple would make such a big difference! Good job mama

I watched that dvd about the "Happiest Baby on the Block" which is all about swaddling and other things to soothe newborn babies, sounds like it works wonders! But I didn't think about the other side of it... glad to hear you figured it out :)

I've been wondering about this! My little guy is only 3 months but we live in TX now and he gets so hot all wrapped up. I did one night unwrapped and he slept... OK. He just wakes himself up so much easier when he's not all swaddled. I need to get him to be able to stay asleep without the swaddle though, because I don't want him to get so hot!

Yay for sleep!! I sucked my two fingers until I was 7 and gosh it is such a gross habit! Hopefully she grows out of it rather quickly!

You're a fab mom! Nice to see you with a little one even though you're going through a lot!

Yay for no swaddle! I love waking up to check the monitor and seeing what akward position my little one has gotten herself into ;) You go Momma!