WOW!
It's been 2-weeks since I have posted here.
That's probably the longest I've ever gone.

I'm going to be honest, I'm toying again with just shutting down the blog.
Yesterday, I was about 99% sure I was done, but then I started to think about how I was going to document everything for Shelby if I do.
Making physical scrapbooks are much harder, as are, online photo books, not to mention expensive.

So, giving that, I'm here and back.
Life has been busy and my job is requiring me to travel much more than I use to, which is exciting!
~~~~~~~~~~~~~~~~~~~~
So, here we go.
Shelby is doing awesome.
She's fully potty trained except for nighttime, she's sleeping great, and we've recently implemented one of those clocks that talks to her and glows when it is time to come see Mom and Dad.
She's also doing great in school.
Not to brag on my child, but the teachers told me the other day how mature and smart she is.

Not sure if I've ever shared, but Brad drops Shelby off every morning and I pick her up.
It's the cutest thing ever, her best friend MaKayla's Mom does a morning picture every day, and most  of the time she includes the other girls and/or kids.
Here are a few from the past couple of weeks. 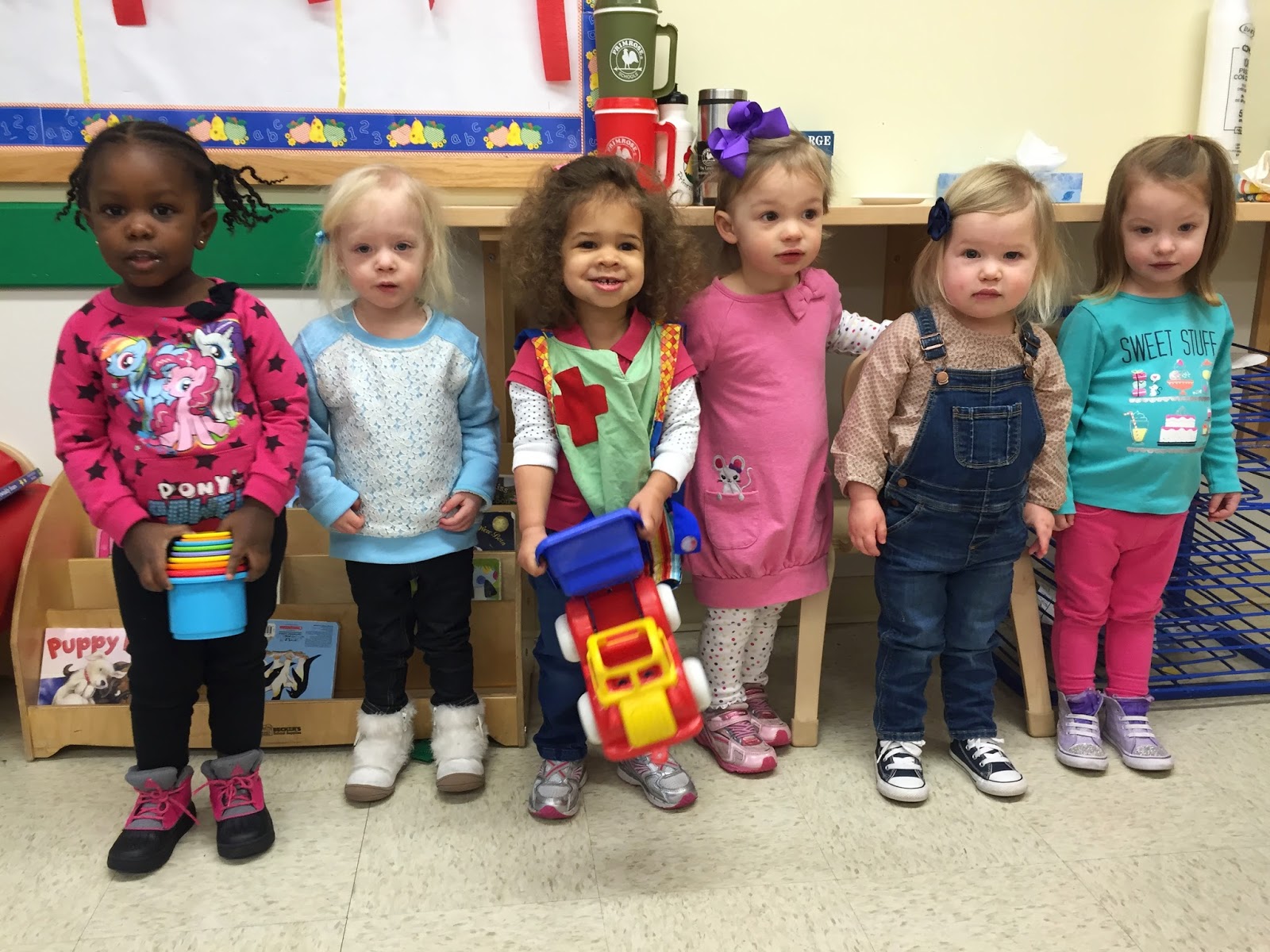 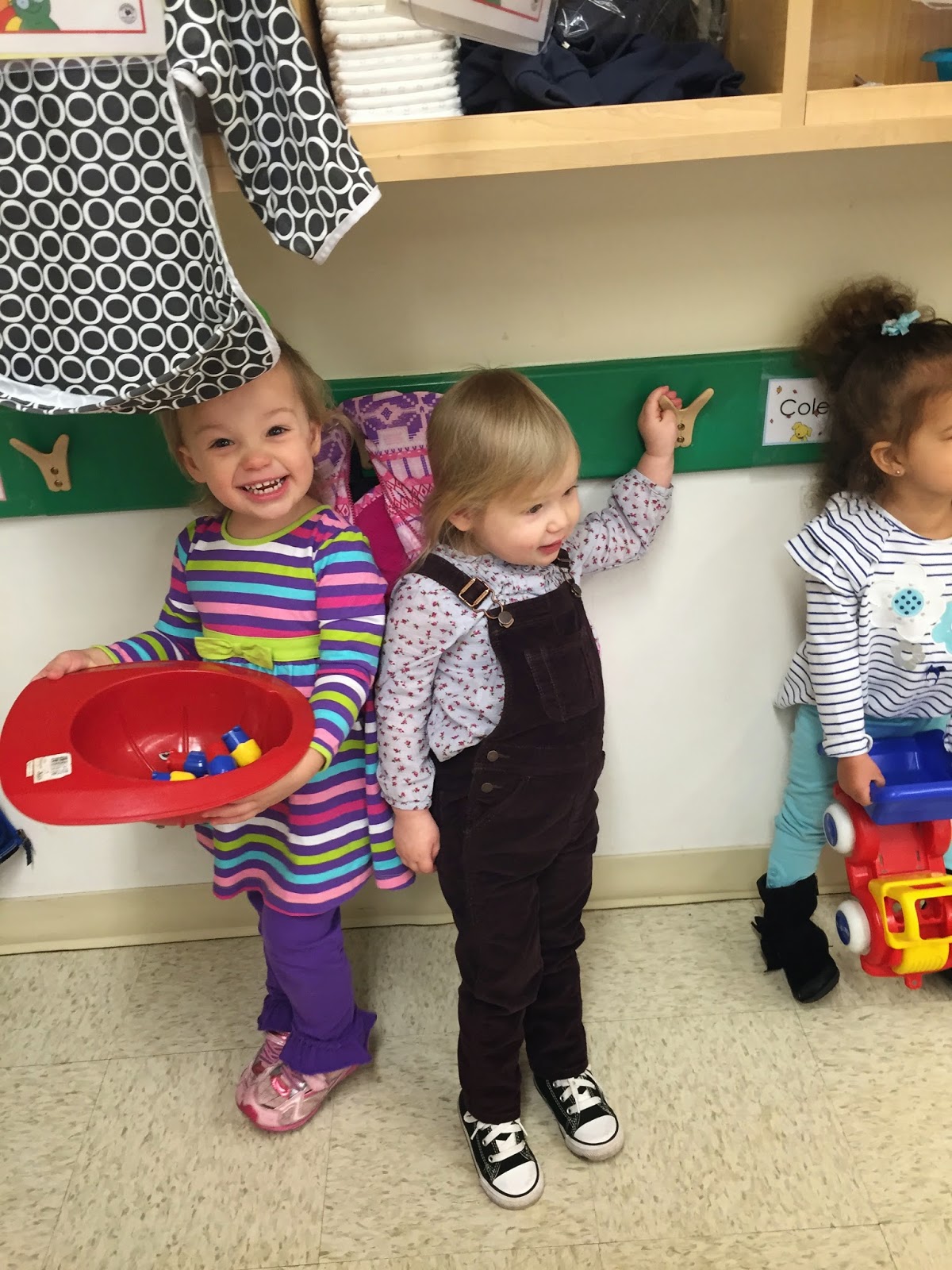 I adore this one.
I actually printed it out for her bedroom. 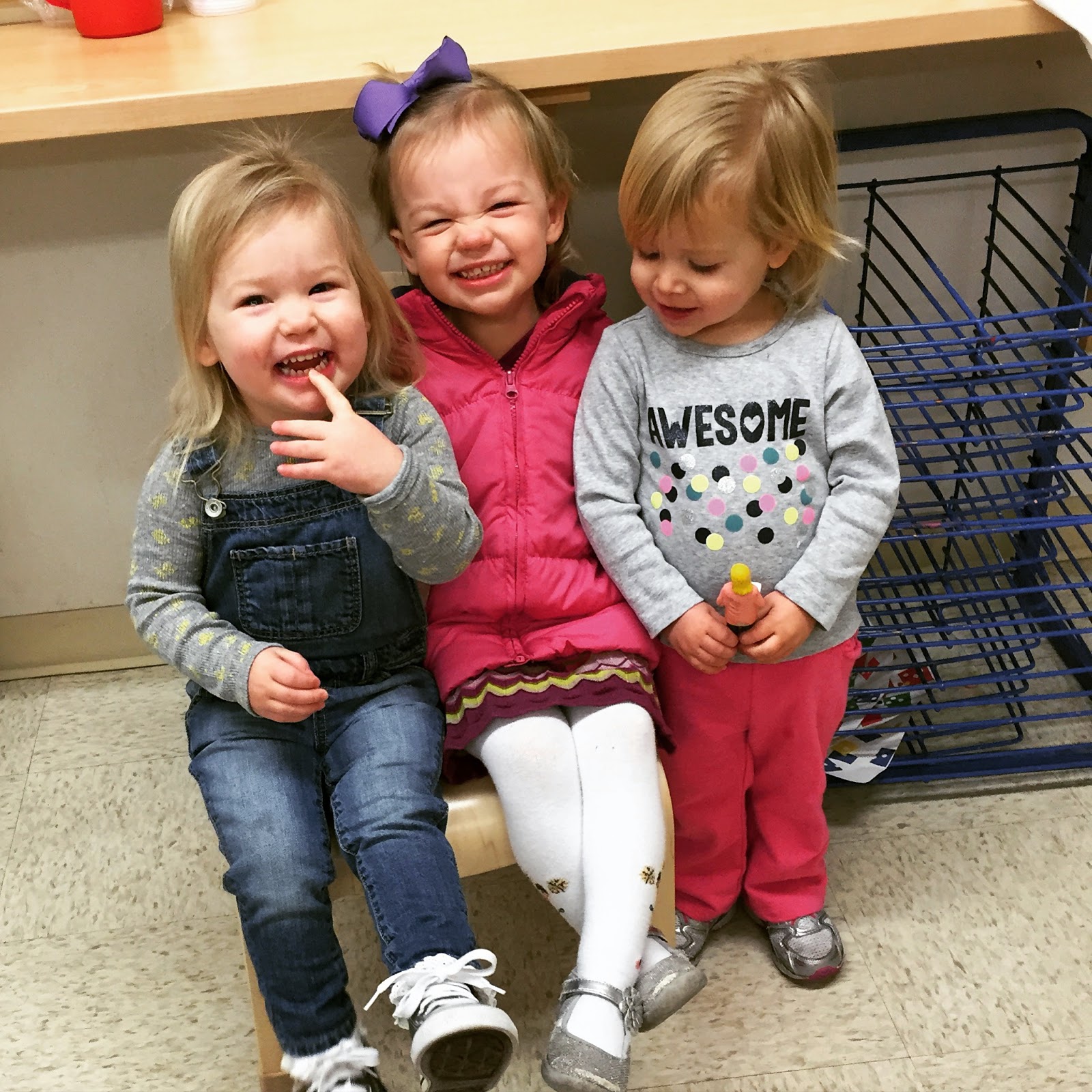 This was Monday and Shelby wasn't feeling the picture. 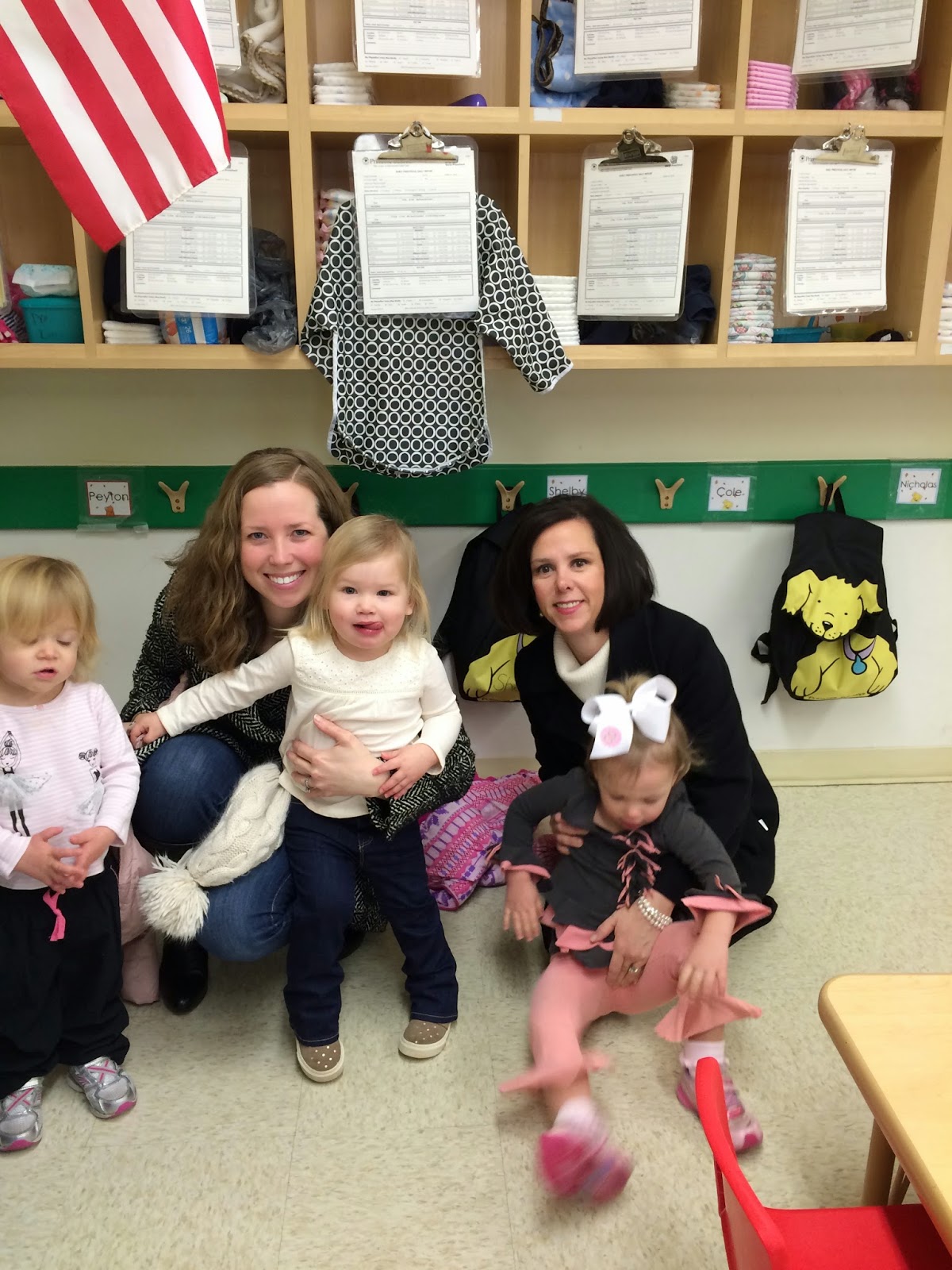 We had a snow day a couple of weeks ago.
The weather forecasters predicted 8-10 inches but we got more 'slush' than anything else, because the temps were too warm.
Even so, we tried out best to have fun with it. 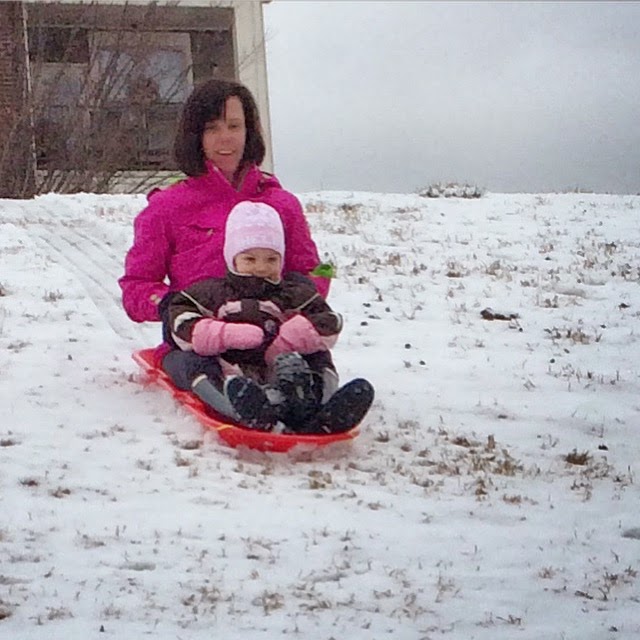 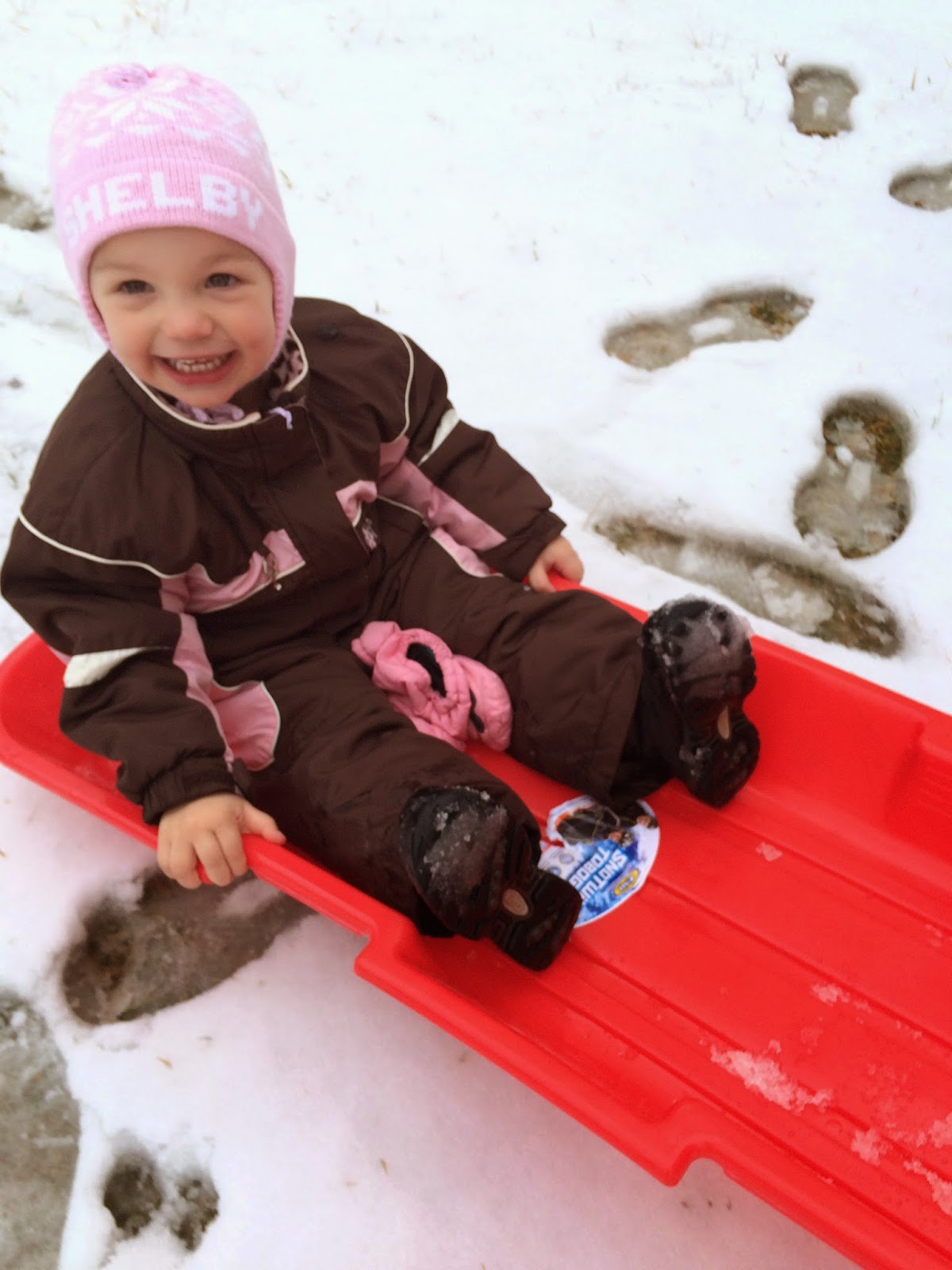 The past 2 Saturdays have included visits to one of our local breweries, Triple C.
This place is great and family and dog friendly. 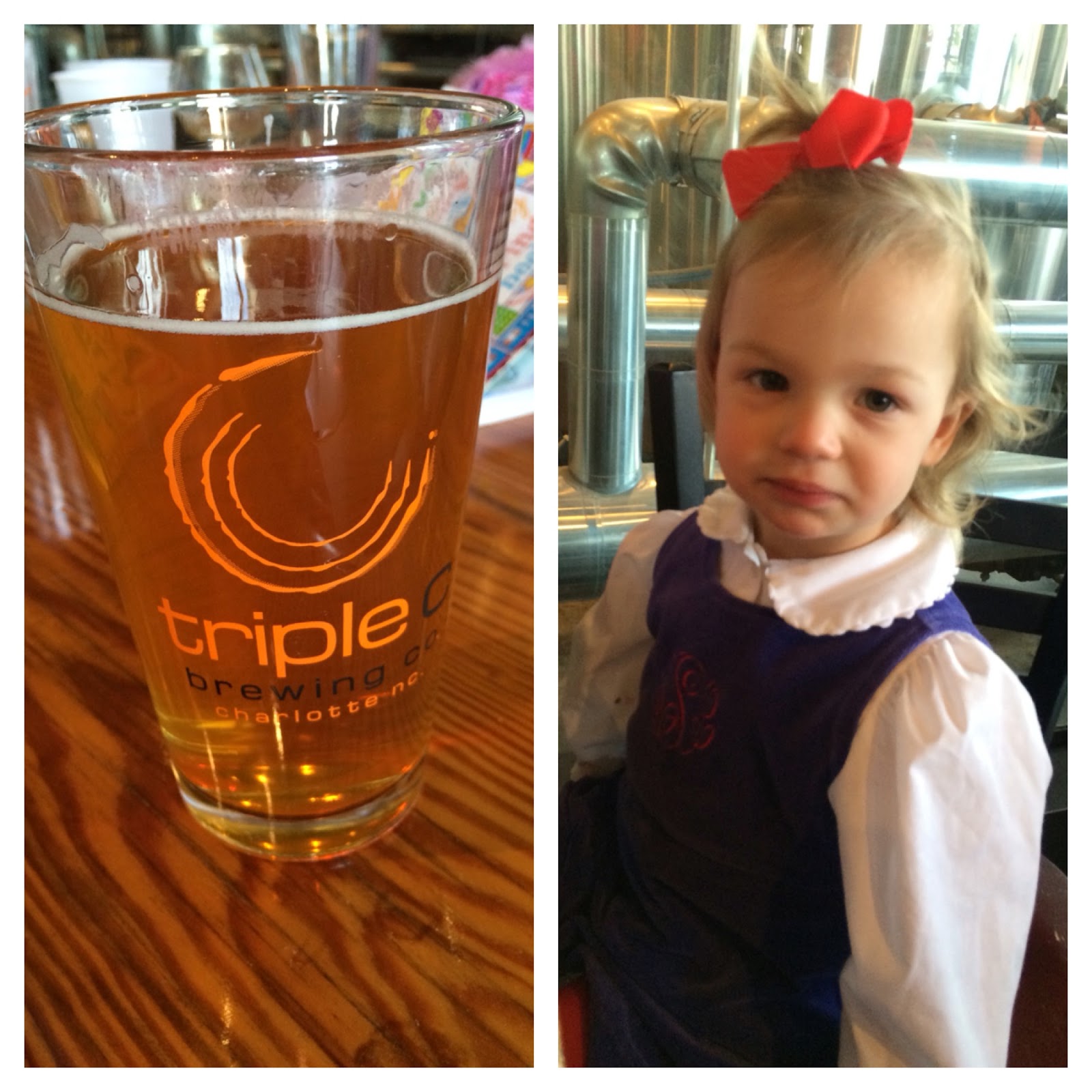 During one of our visits we discovered a small thing of PlayDoh in a gift bag Shelby received from a classmate for Valentine's Day.
I think Brad enjoyed it more than her!
He's such a great Daddy! 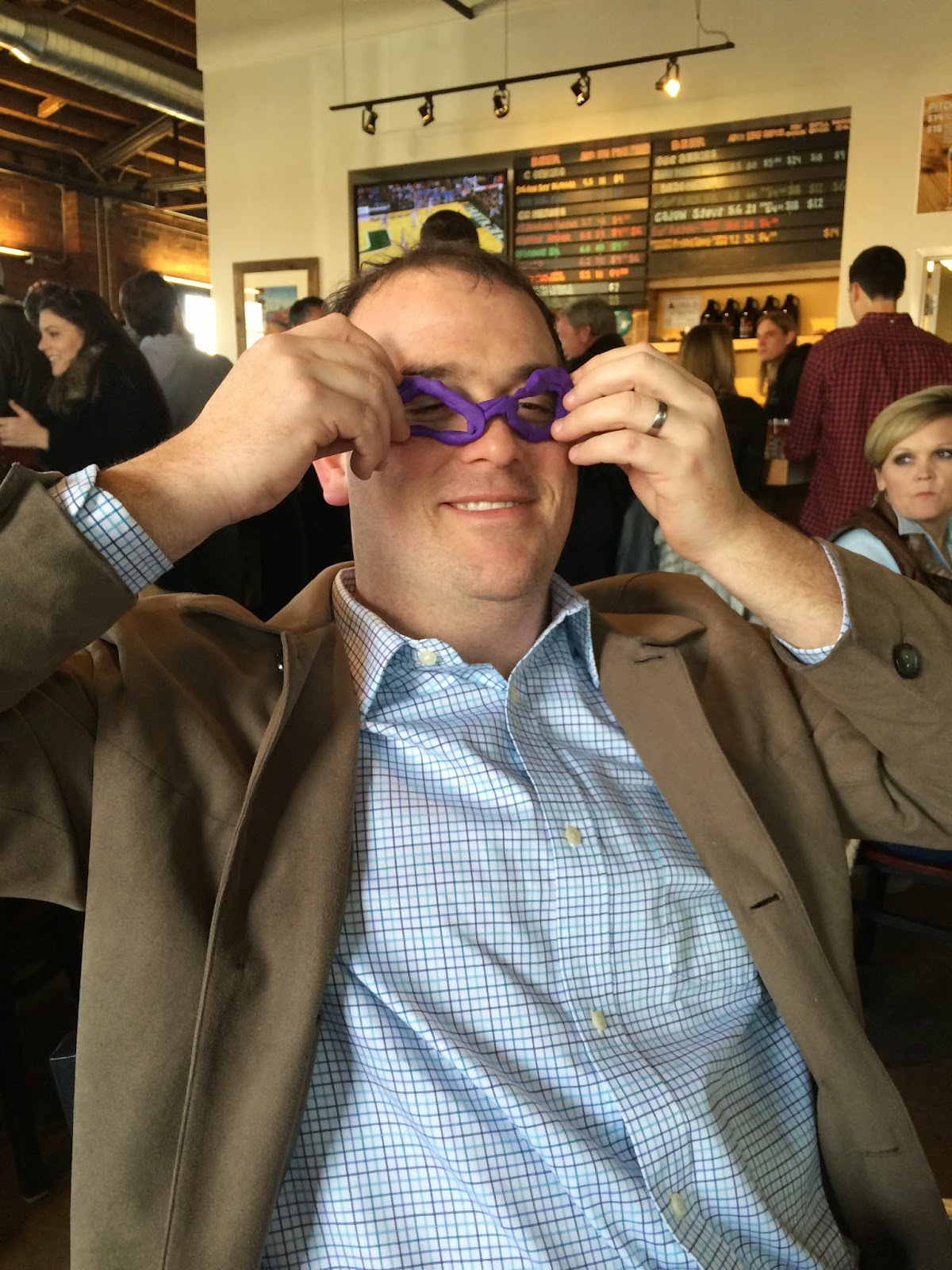 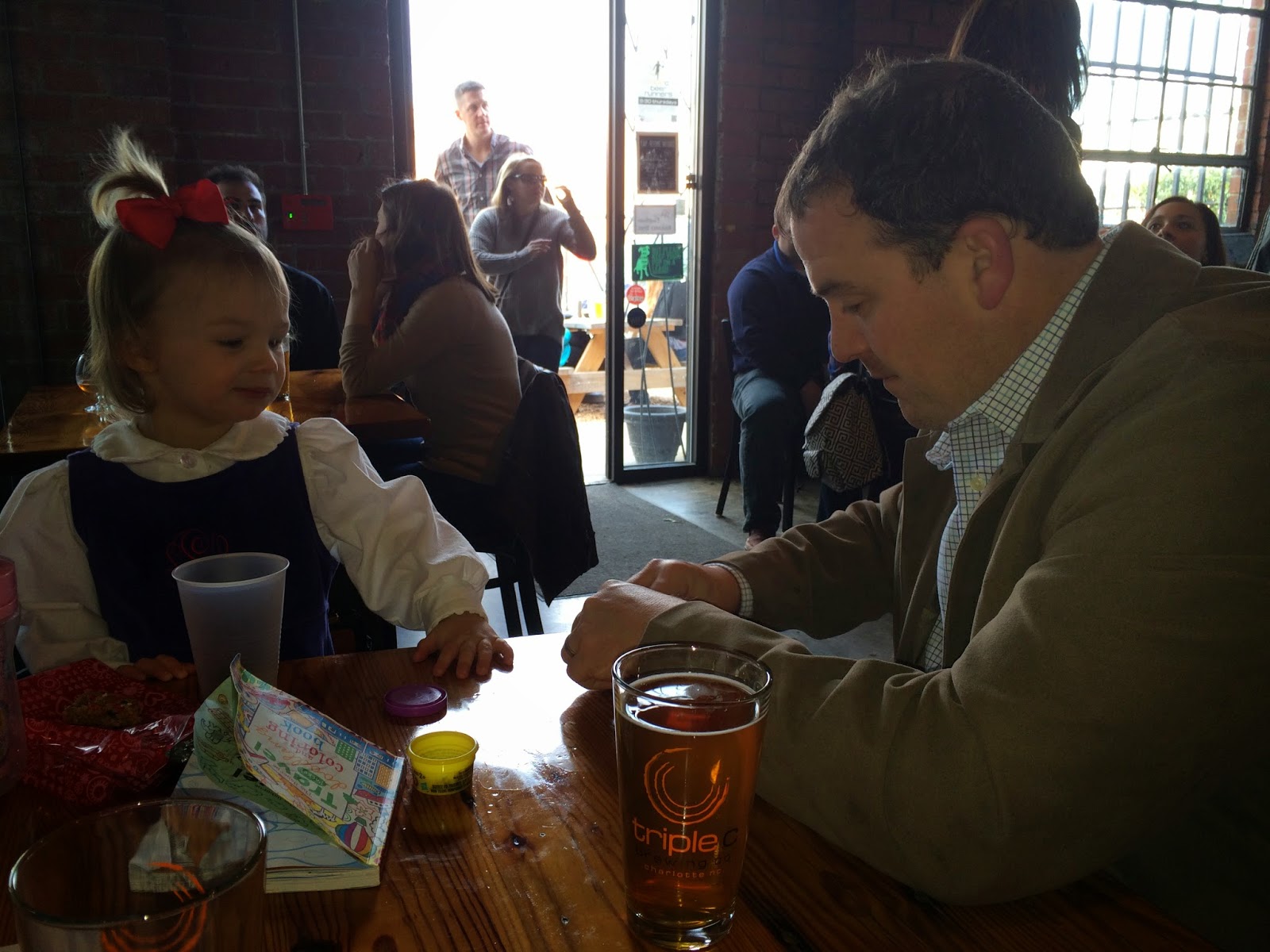 He even made her an earring which she got a total kick out of! 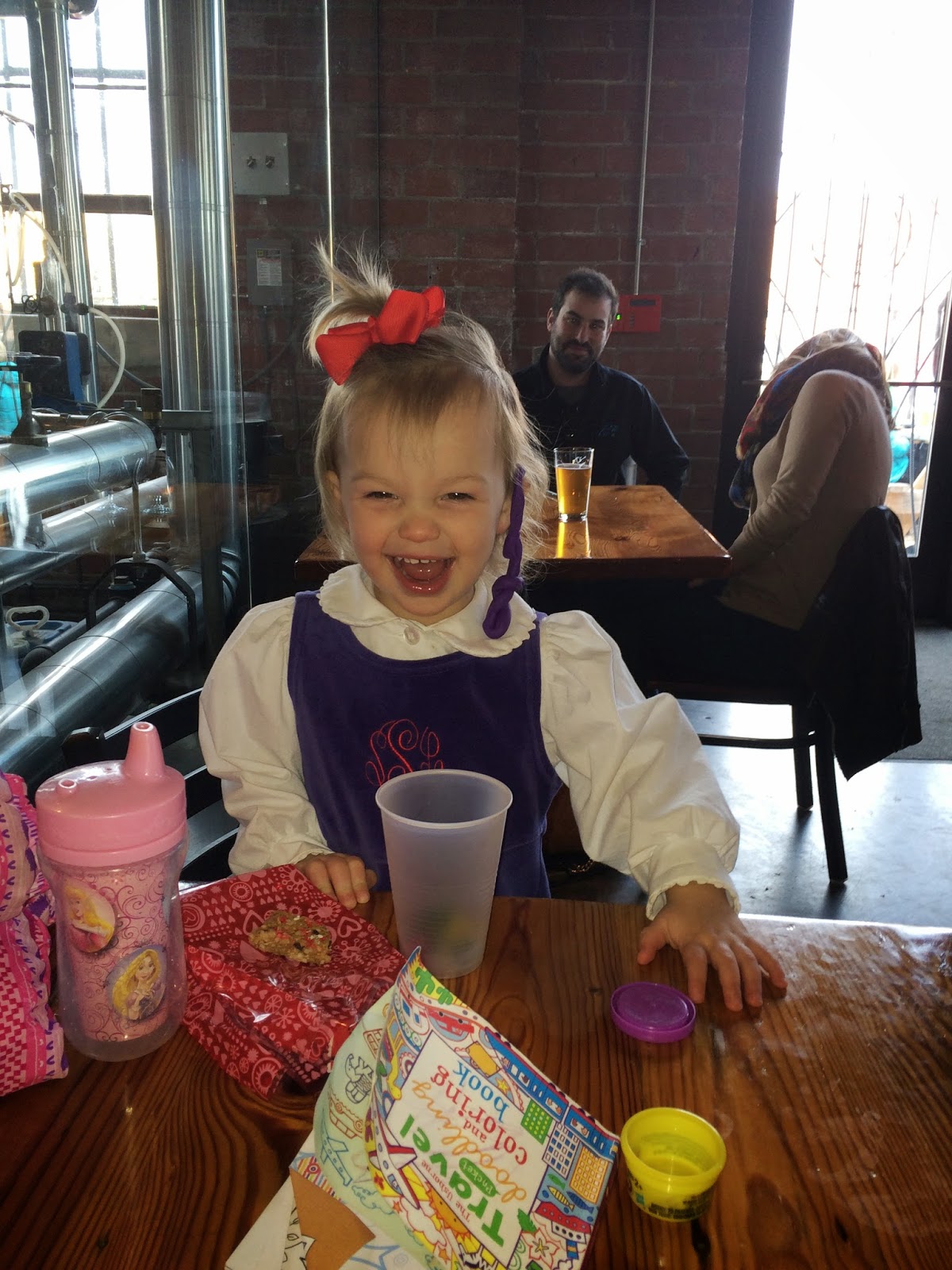 This is probably my favorite picture right now.
I even printed one out for Brad to take to work for his desk. 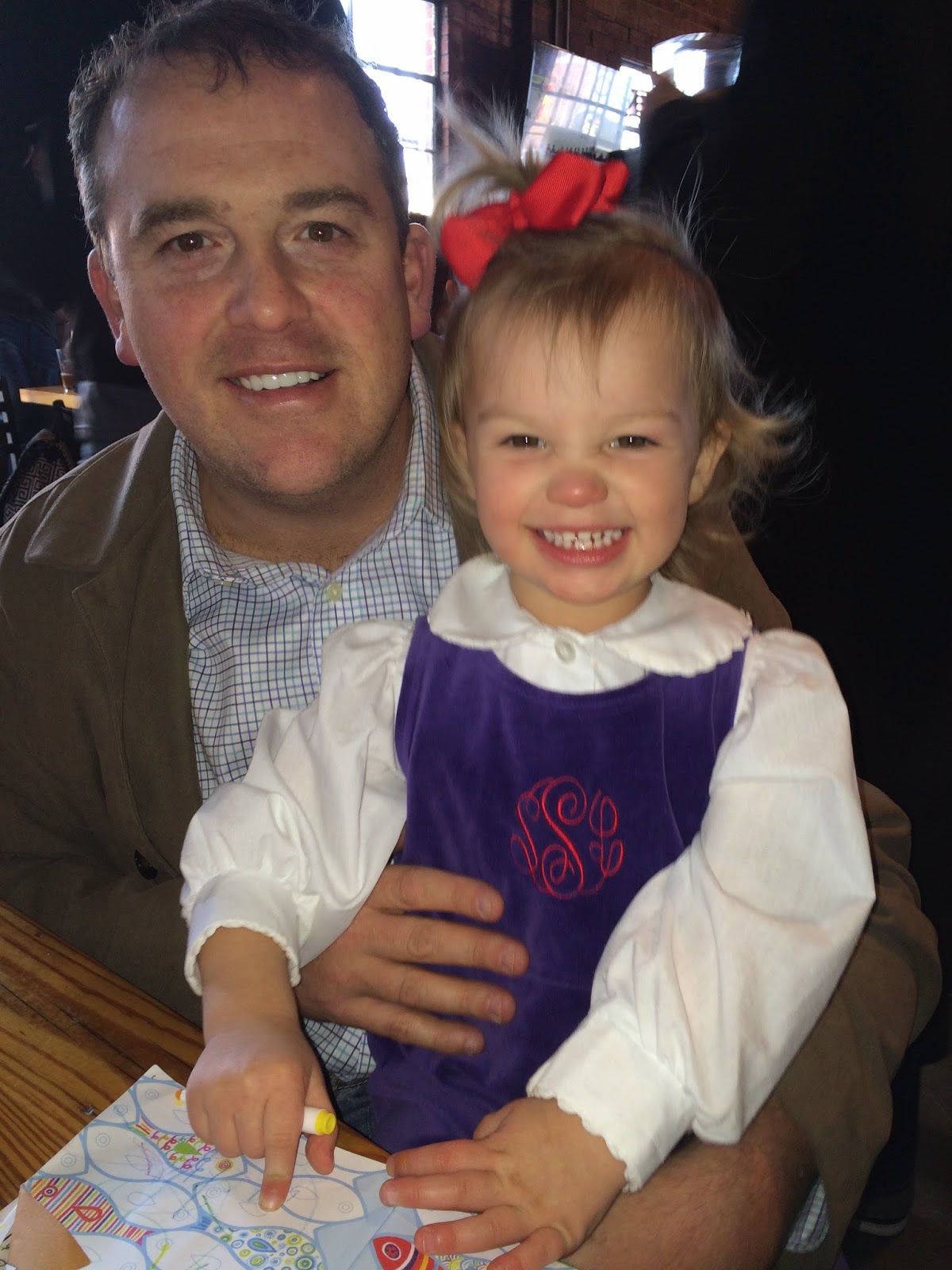 For the first time that I can recall, we had dinner with Brad's parents and BIL and SIL, sans kids.
We dined at the local restaurant Firebirds and it was fun and delish. 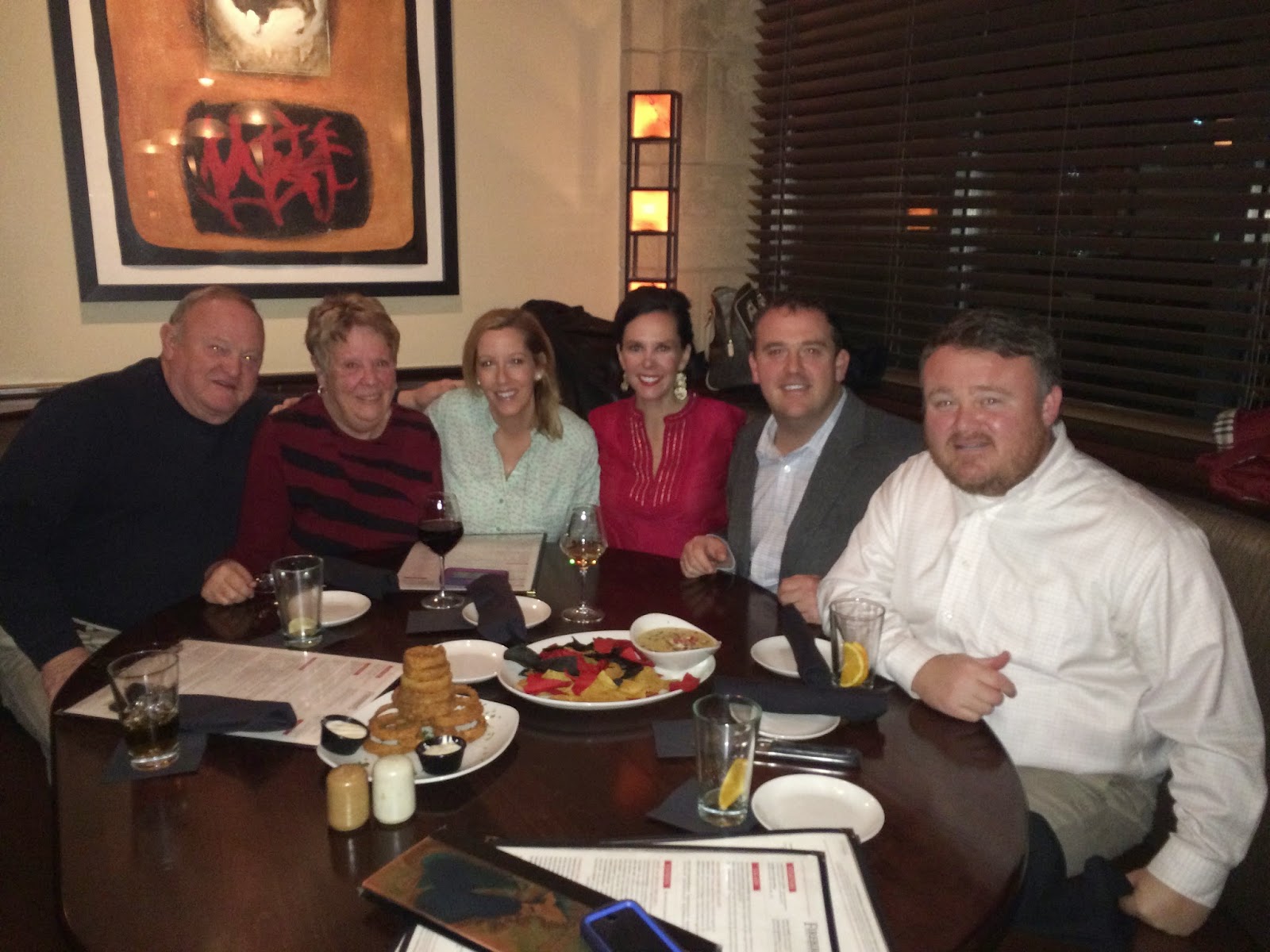 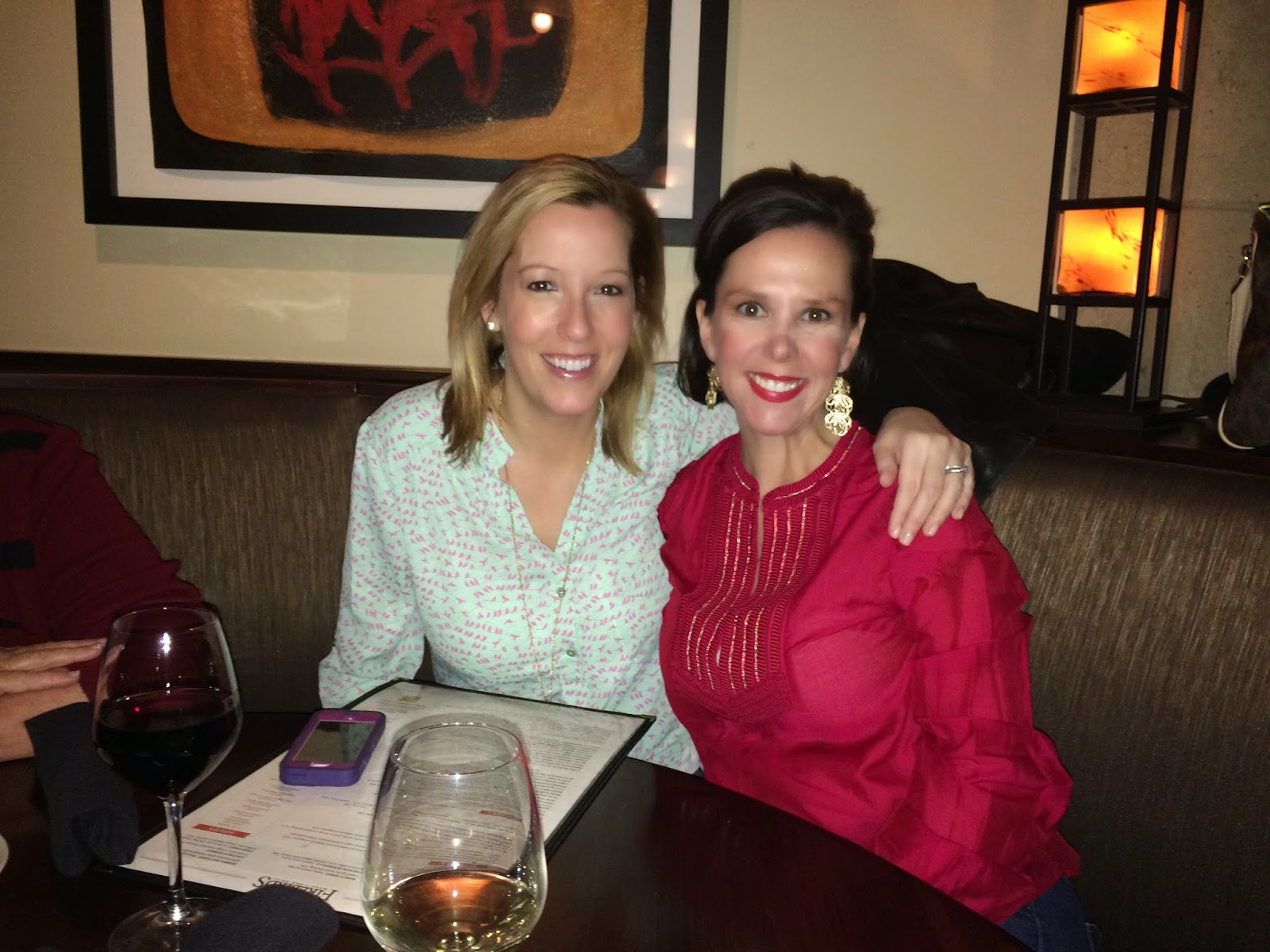 The next day, Grammy and Paw Paw stopped by for a visit with Shelby before they headed home. 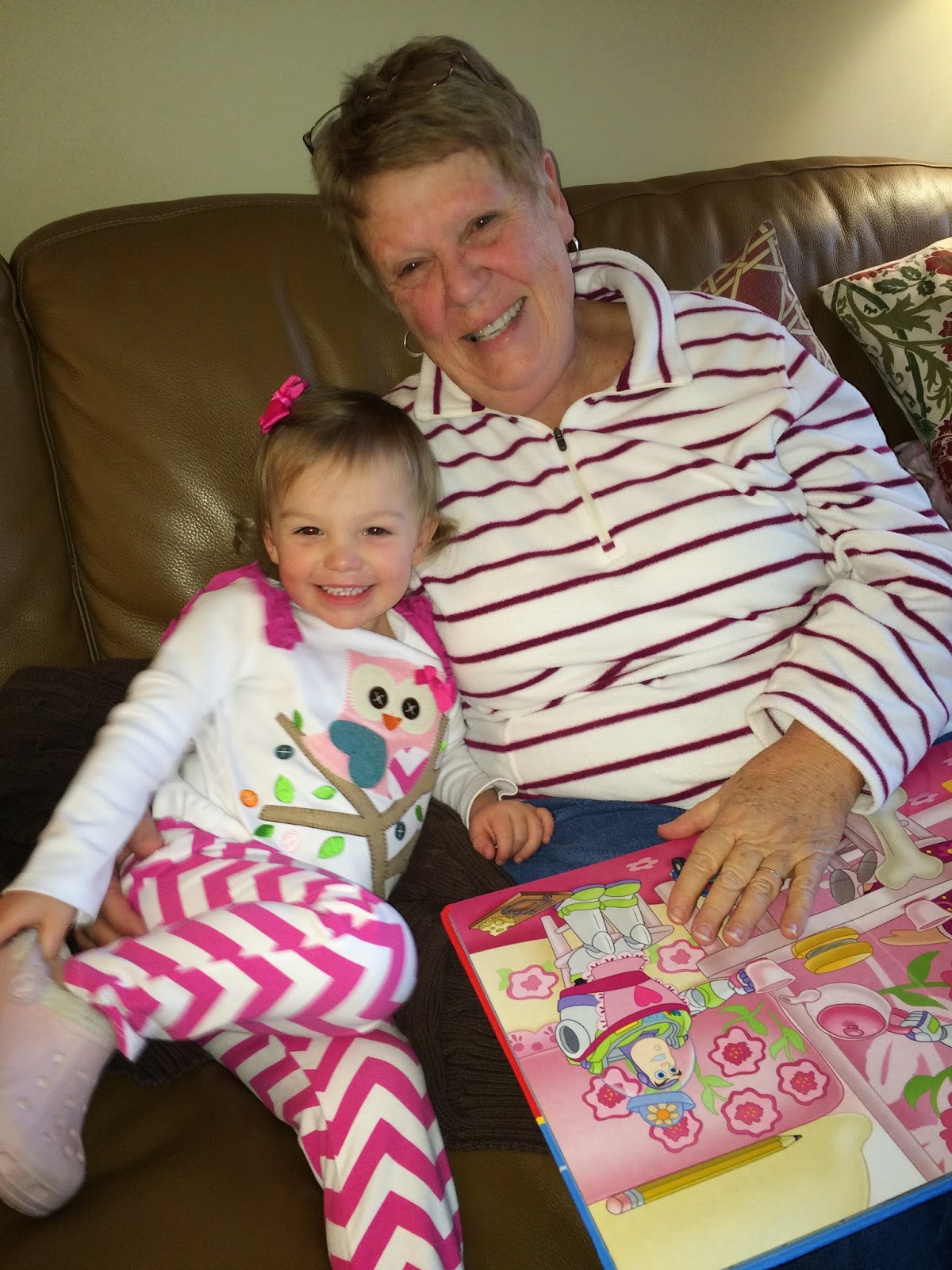 I traveled to Boston for work last week.
All the snow they've been talking about in the news?
UHH.. it's for reals.
And...
REDIC!!
Working up there gave me a chance to see my good friend Emberly again.
Boy, is she ready to leave Beantown.
She's OVER the weather and the commute! 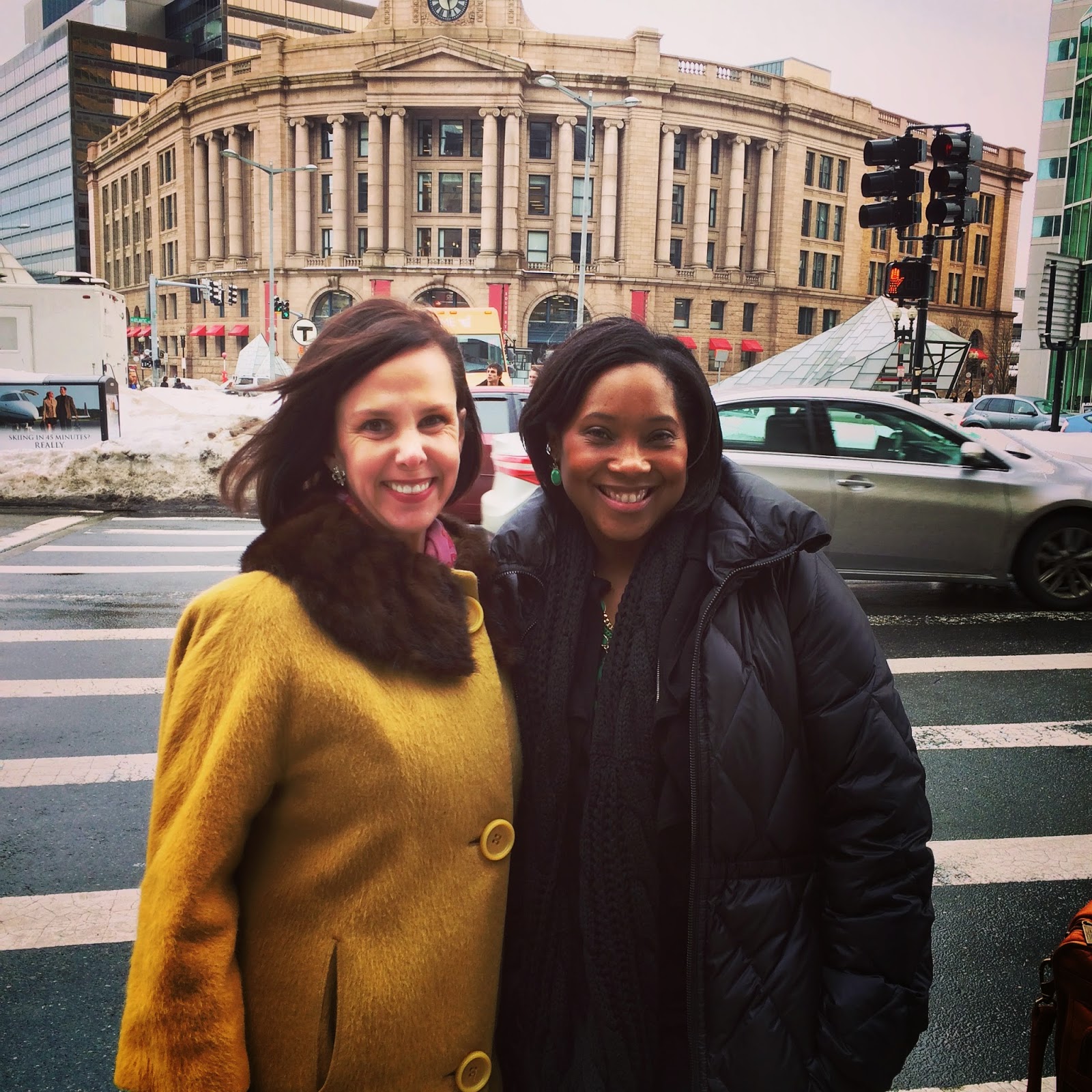 I told another one of my colleagues how the book 'Make Way for the Ducklings' is Shelby's favorite book.
He then proceeded to tell me about the Mallard family shrine they have in the Public Garden and how there is even a 'Duckling Festival' every Spring!!
So, we put our snow boots on and went to take a look! 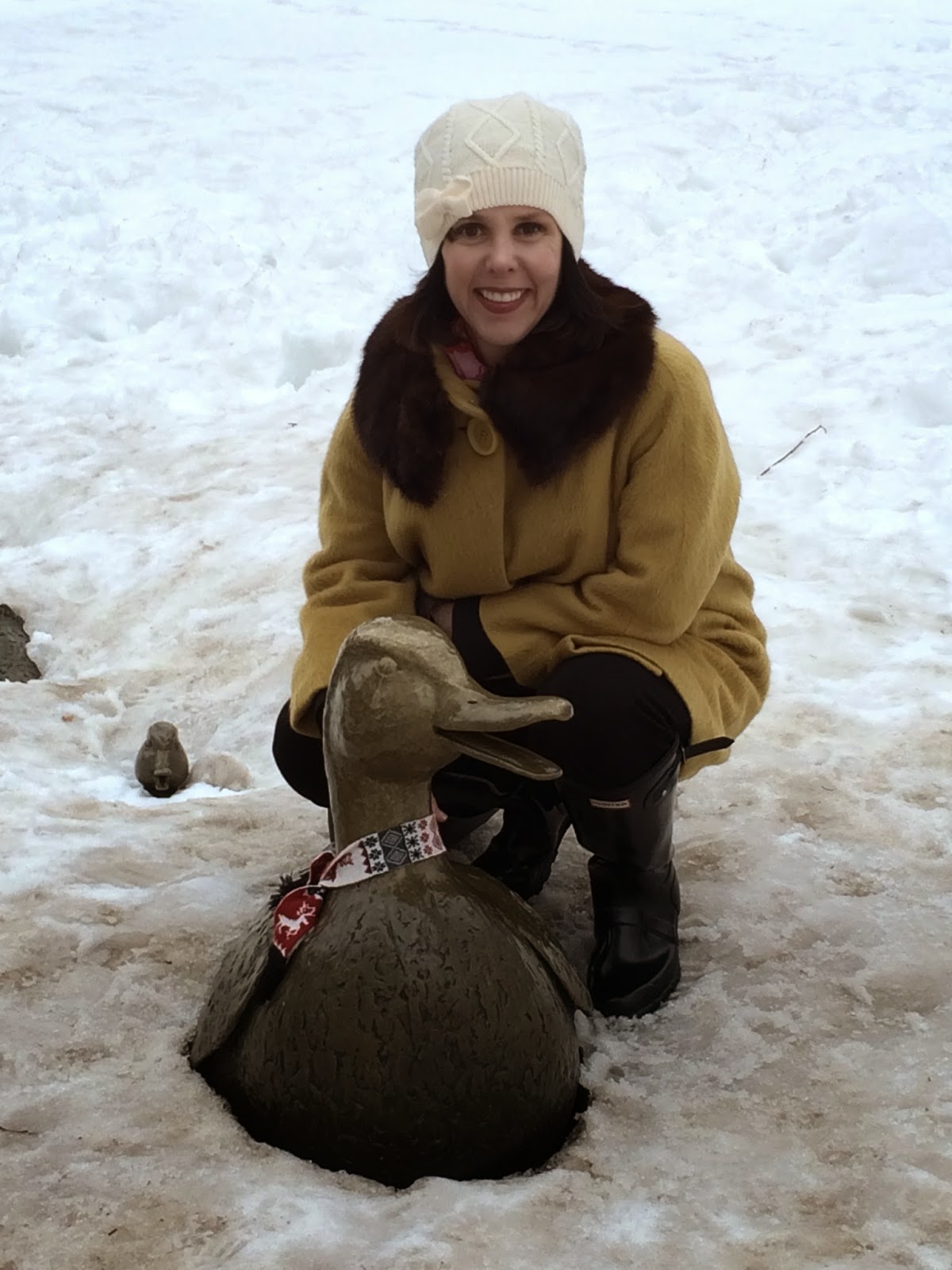 When we first walked up we were afraid they were snowed in, but then realized someone has plowed around them.
Thank Goodness!!
:-) 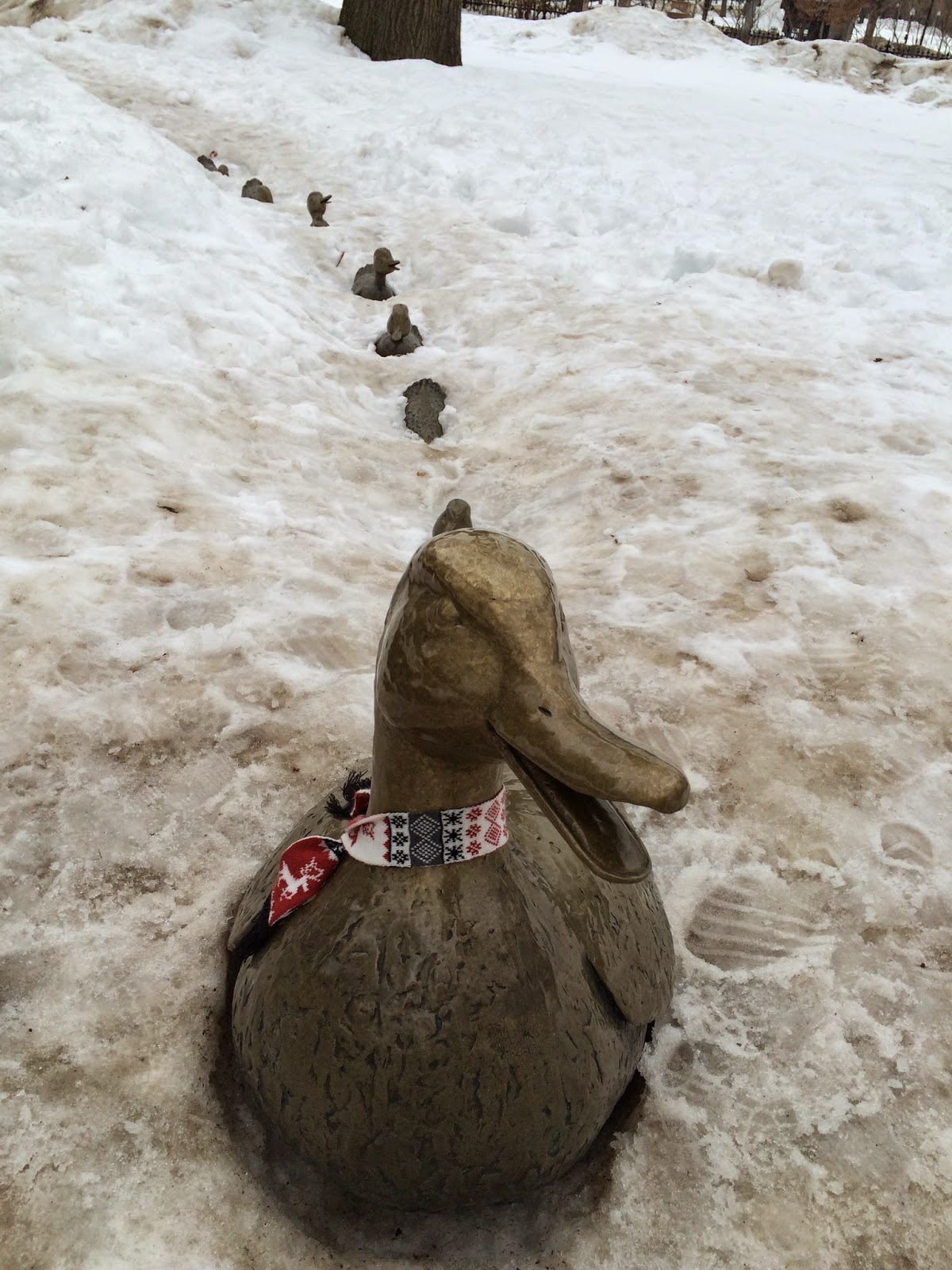 Not going to lie, I was giddy about this whole thing!
I would love to come back one year for that festival! 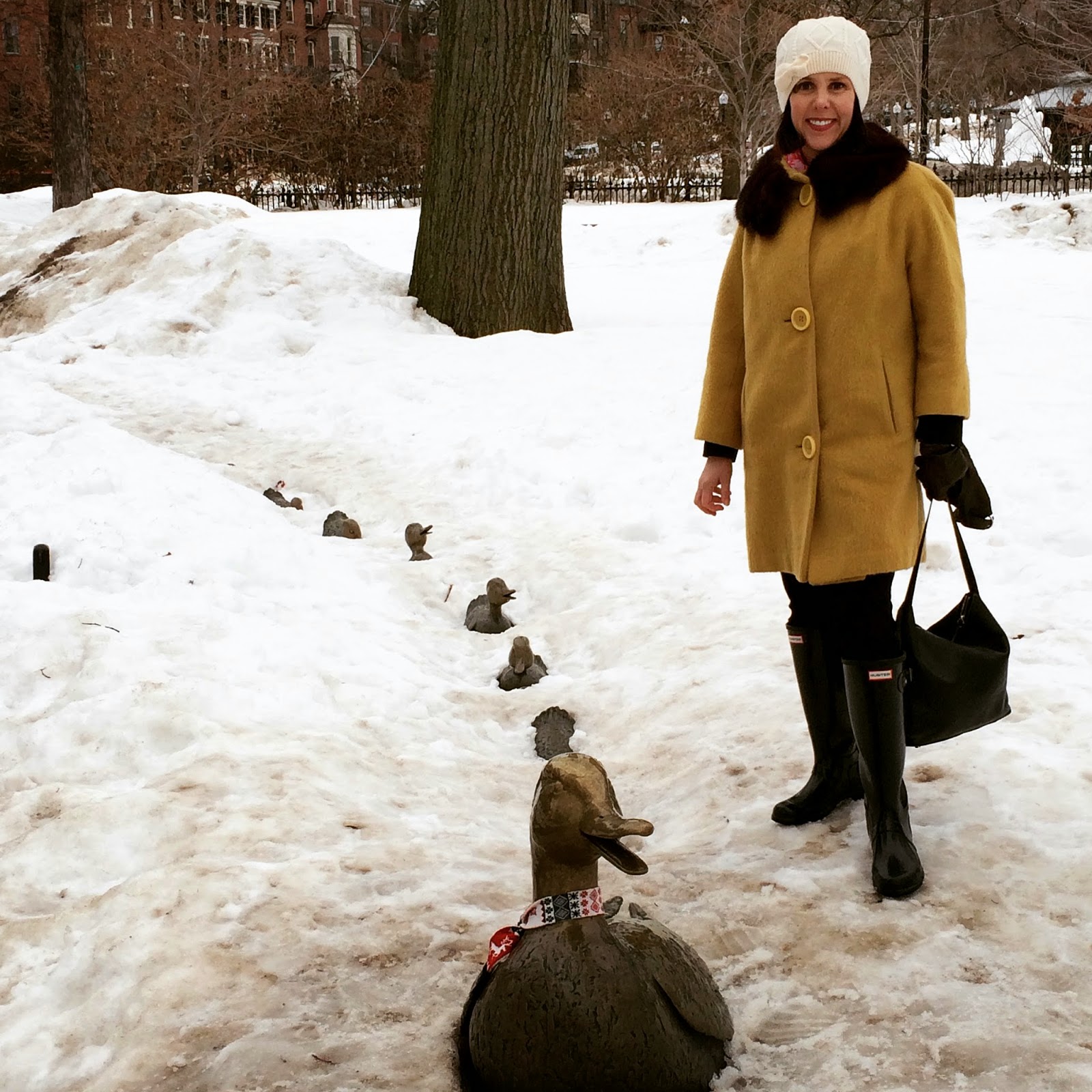 As I mentioned, this past weekend we spent another Saturday afternoon catching up with friends at Triple C.
I was told it's Baby Jack's 6th brewery and he's just 4 1/2 months old! 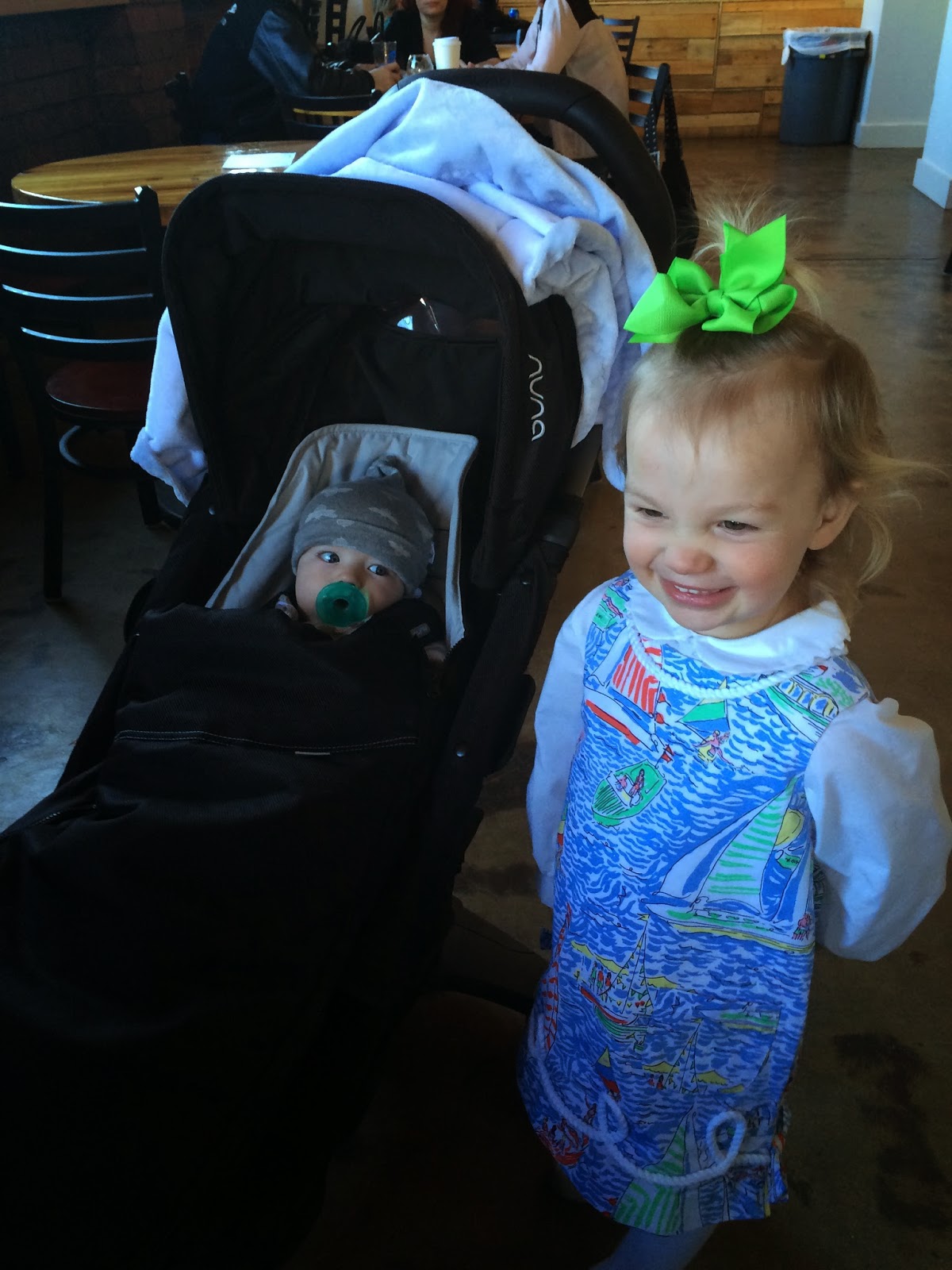 I called my old friend Alexis, who I worked with at Fox, and she came and met us.
Great to catch up with her as always. 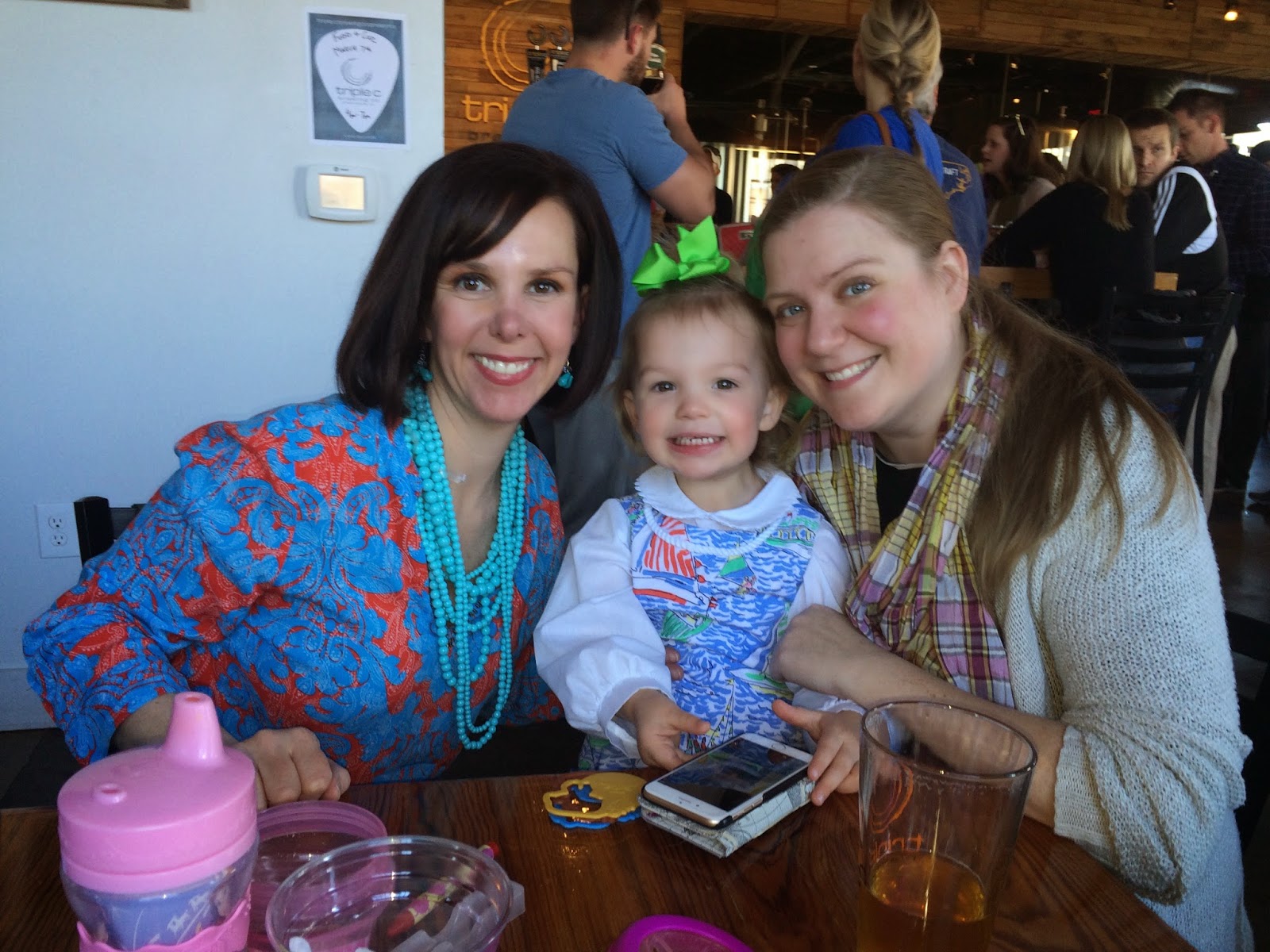 And, last but not least, we spent another Saturday evening on the town sans Shelby.
Our friends LuLu and Keith watched S while we checked out our friend Paul's new place at The VUE.
Talk about swanky and just check out his view!!!
Such fun! 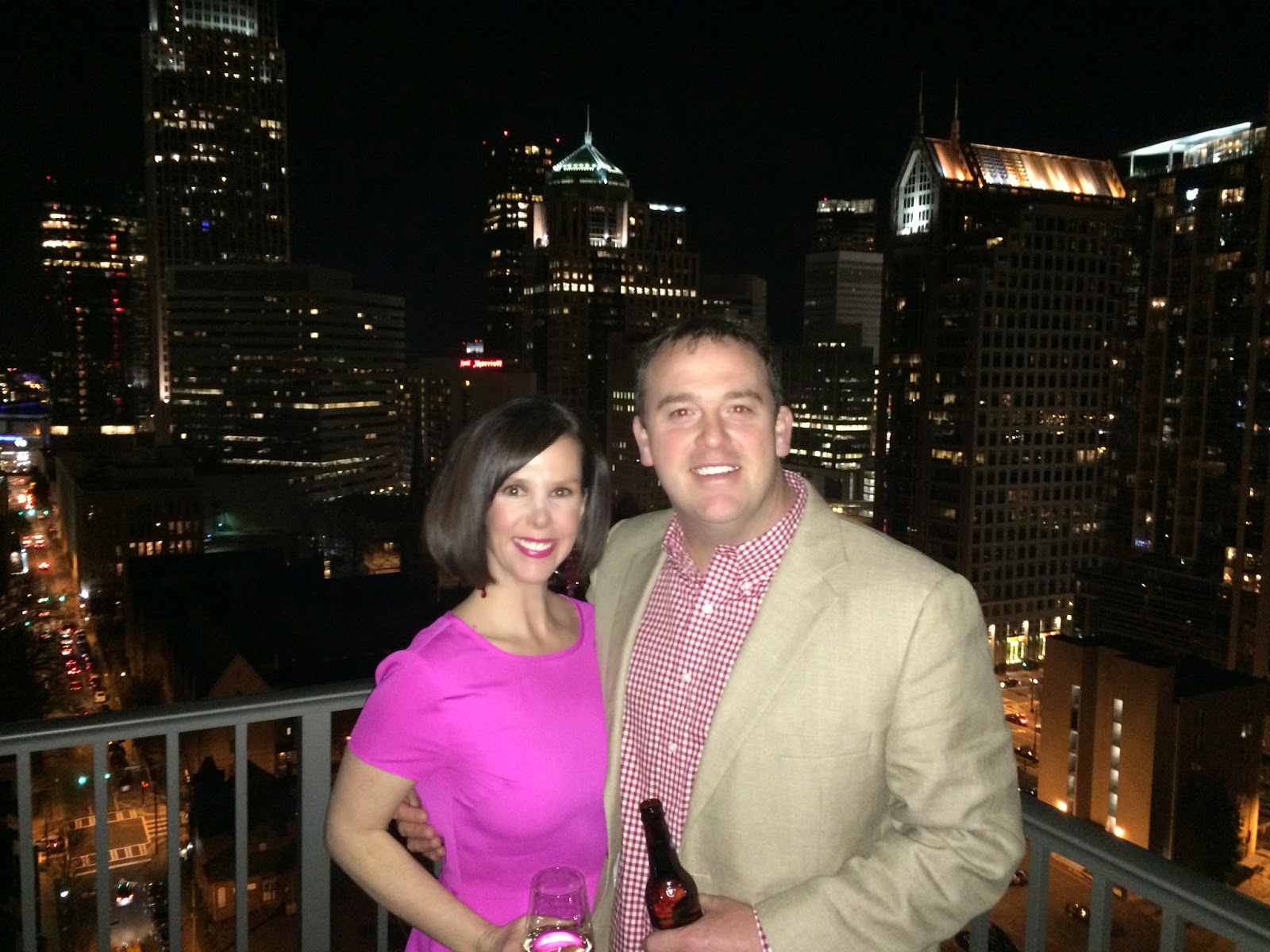 Tomorrow, a post about Shelby's first visit to our local science and education museum where she checked out the 'bed of nails!'
YIKES!
CIAO for now!

I was worried about you! Glad you are back and decided to keep blogging. Looks like y'all have had lots of fun. I'm jealous Shelby is potty trained. Drew totally knows how to go on the potty but she refuses to most of the time that we're home and asks for a diaper. At school they wear underwear in her class and a lot of days she comes home with zero wet clothes, but then other days (like today) she has had a few accidents. I am trying to chill about it because I know rushing her only makes it harder on everyone, but I was really hoping she'd be done by the time we moved. I guess not, ha!

Sometimes I am totally over blogging, and if I get behind sometimes I just leave things out instead of recapping them.
OMG Shelby's Get Nauti jumper!! I just about died. Soo cute!!
You look amazing in the last picture!!