After months of working on it, it's finally time to reveal Shelby's nursery.
There are a few little touches that still need to be made but I figured it's time and some of those touches may not happen until after she arrives.

I owe a HUGE thanks to multiple people for helping make it happen but first and foremost is to my awesome husband Brad.
I have had him moving, hanging, and painting things for weeks.
Then, in the last week or two he has become an electrician(with help from my BIL), and figured out how to rewire lamps, wire chandeliers and more.

I have many more people to thank but for now, let's get to the room. 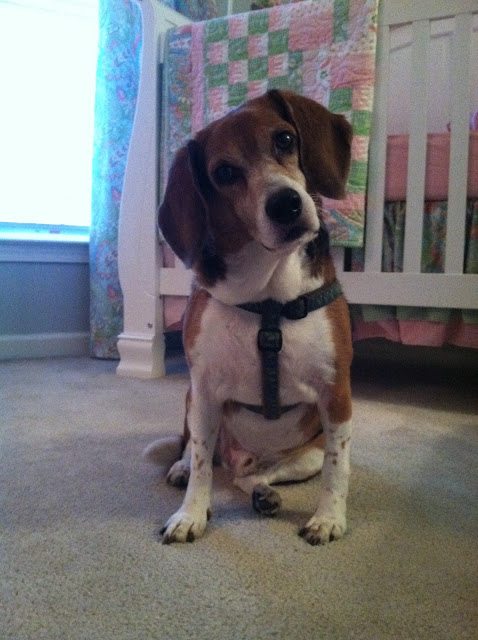 Here's what you see when you first look in from the door.

We started converting the room from an office/guest room into the nursery back in late September.
We decided to keep the walls the color that was already in there.
Saved us some time and money. 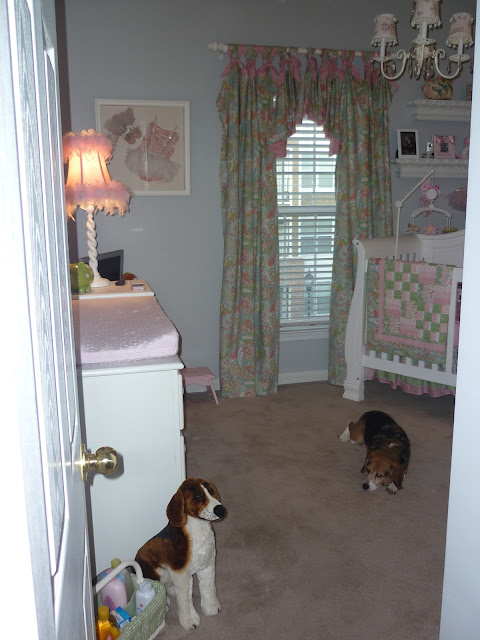 The chandelier was the last addition to the room.
I just love it.
My cousin Kendra sent it to us after she redecorated her daughter's room, a big thanks to her.

The shades don't match perfect, but that's one of the other 'touches', I mentioned at the top of this post.
They work for now, but I'm on the lookout for some that look better with the colors in the room.
The chandelier was a big job because this guest room didn't even have a pre-wire for a light.
Thank goodness my BIL knows how to do electrical work, so on Friday evening he and Brad worked to wire the room and hang the light fixture.
A HUGE thanks to them both!! 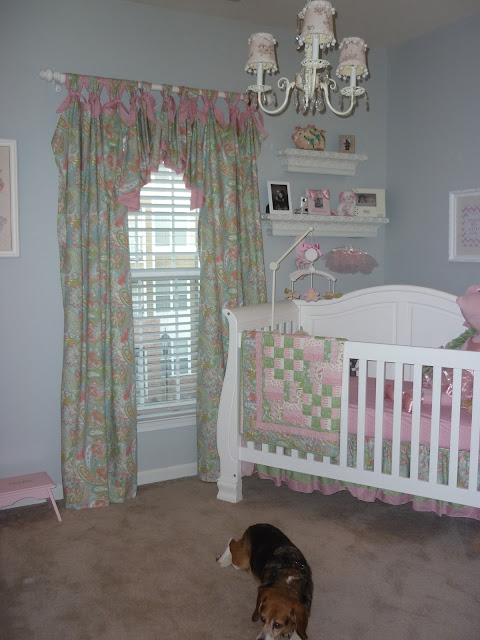 The curtains and all the bedding are custom made.
You might recall, that I chose the fabric back in the Summer and my Mom was planning on making  everything.
Well, in the end she had a friend of hers make everything, except for that quilt that is hanging over the edge of the crib.
My cousin Katie handmade that and I couldn't be more thrilled with it.

I opted out of doing bumpers because of the American Pediatrics recent ruling that they're dangerous, I had numerous people tell me they didn't even use them, and lastly.. I didn't want to spend the money on the fabric.

As for the crib, we were lucky enough to have inherited it from Brad's brother and his wife.
Shelby will be the 3rd Stephens to sleep in it. 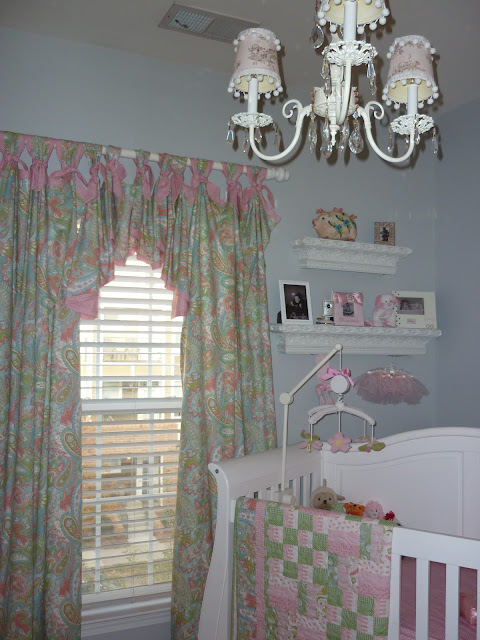 I was really torn on what to put on the big adjacent wall in the room.
I love the big hanging letters, monograms and even murals that a lot of people do, but I knew I didn't want to go that route.
After much thought I came up with this simple solution.
Printables, designed by Hopsy and A Liz framed and matted up.
I adore.
Thanks to both of them!! 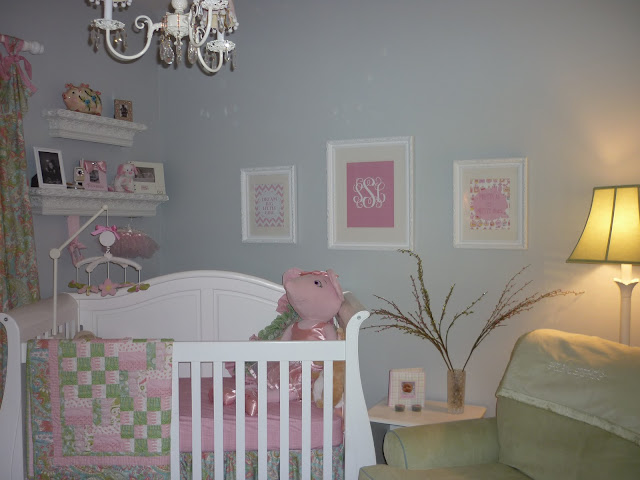 I really feel like the printables aren't too babified and will transition into a little girls room.
That saves money in the long run.
Right?

I bought the frames and mattes at Hobby Lobby.

As for Angelina the Ballerina being in the crib, that is obviously for just 'right now'. 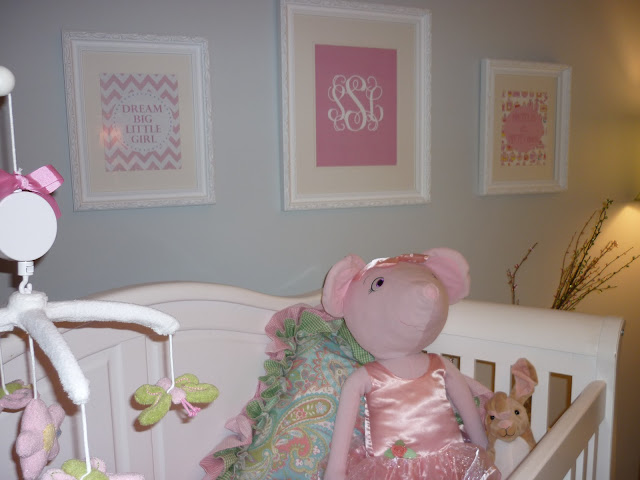 The shelves were a tough one.
I knew I wanted white ones to hang in the room but didn't want to spend the money on the ones at Pottery Barn Kids.
After much thought, I remembered that I had saved a pair of silver shelves that I had in my old condo.
I talked Brad into painting them and 'wah-lah!'.
At first, Brad had a hard time envisioning the silver shelves white, but after seeing the cost of shelving, even at Lowe's, he agreed to give it a shot.

In the frames on the shelves I printed out old baby/kid pictures of both Brad and I.
Eventually, pictures of Shelby will be in those. 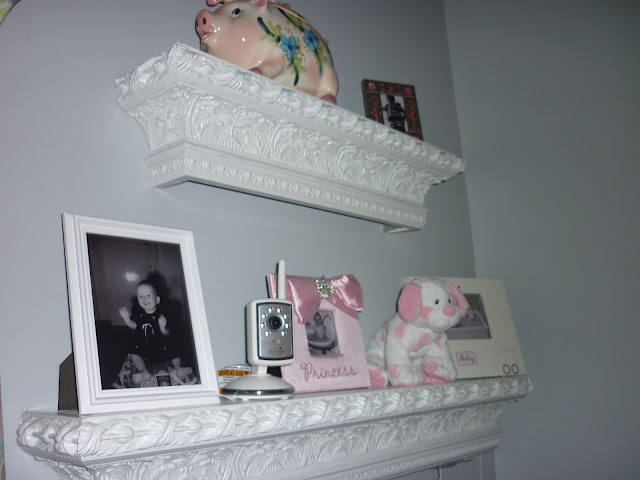 In the right corner of the room is our glider.
This is by far the piece of furniture we spent the most money on.
After shopping extensively, we decided on a chair from the Storytime Series from Best Chairs.
It's big and comfy and perfect for Brad to even sit in.

The lamp was a labor of love.
Again, I refused to spend $300 on a lamp at PBK, so I shopped like crazy.
We finally settled on a brass floor lamp for $50 at a local consignment store then painted it white.

I had $50 credit at PBK, so I used that for the green shade.
What we didn't realize until later was that the shades at PBK are European and our lamp was standard.
After many curse words and running around, Brad finally made it work.
He even rewired the lamp to make sure it is safe for Shelby's room. 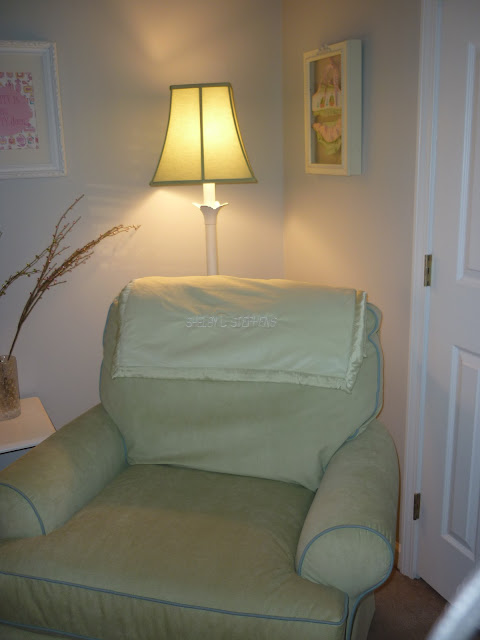 The blanket was a shower gift from a co-worker.
LOVE IT! 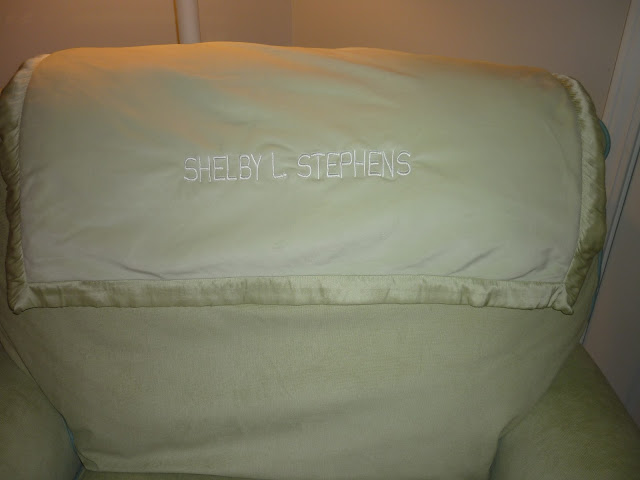 My Mom found this shadow box on sale at TJ Maxx and we couldn't resist displaying the smocked bikini that my sweet friend Beth sent her.
It matches the room decor perfectly and Shelby won't be able to wear it for a few months anyway. 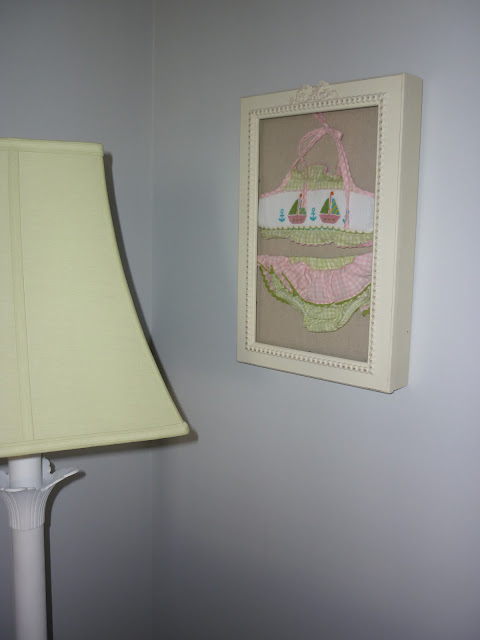 Other little details in the room that I just love is the stuffed beagle that I Do Declare gave me, a butterfly nightlight and monogrammed bath caddy that were both shower gifts. 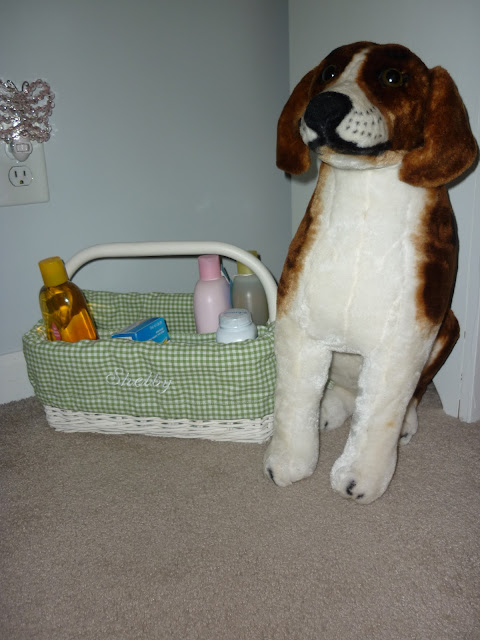 On the left side of the room is the dresser/changing table.
We found this on Craigslist for $100 and painted it white.
The mirror was already in the room, the lamp is from Hobby Lobby and the piggy bank was a gift from my Mom. 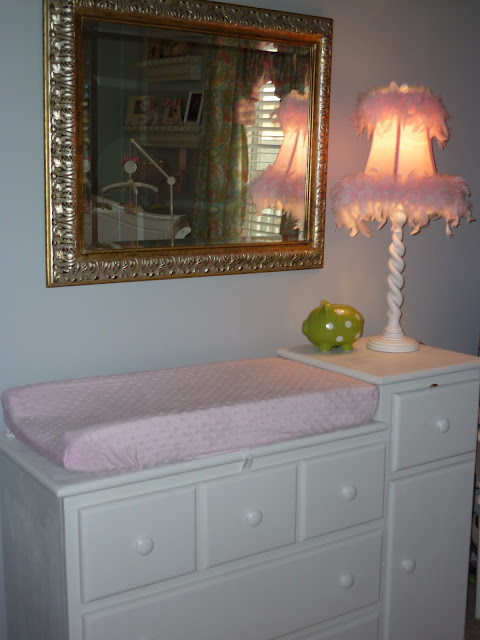 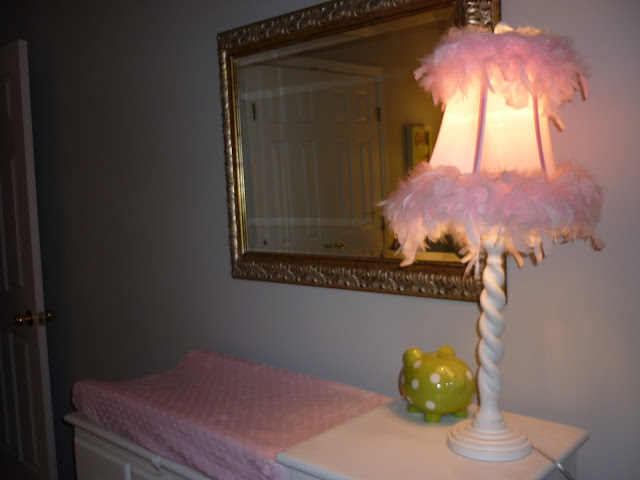 This little table/night stand sits in between the chair and the crib.
It's a piece we already had and Brad painted it white.
It gives us a place to sit items when we're in the chair and seconds as a bookshelf. 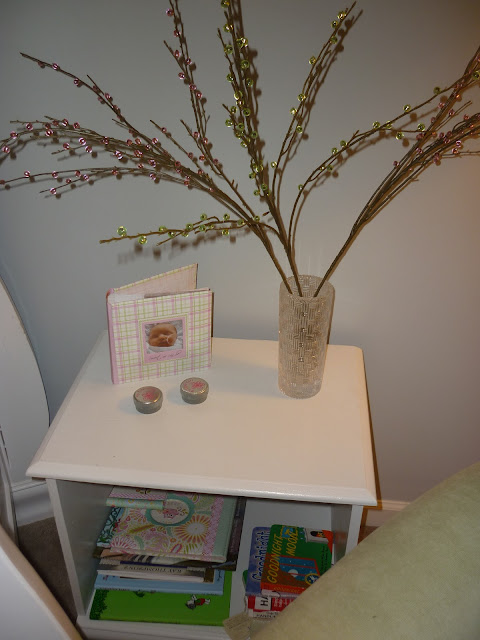 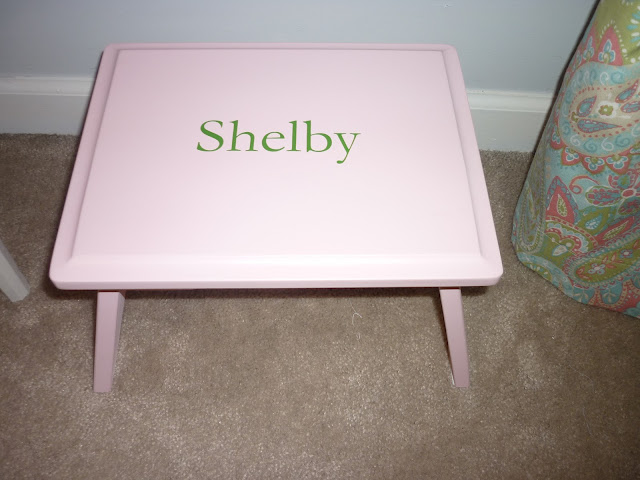 As far as my favorite part of the entire nursery?
This shadow box that my Mom had made for the room.
It's my very first ballet costume and shoes from when I was age 3.
Even Brad really likes it. 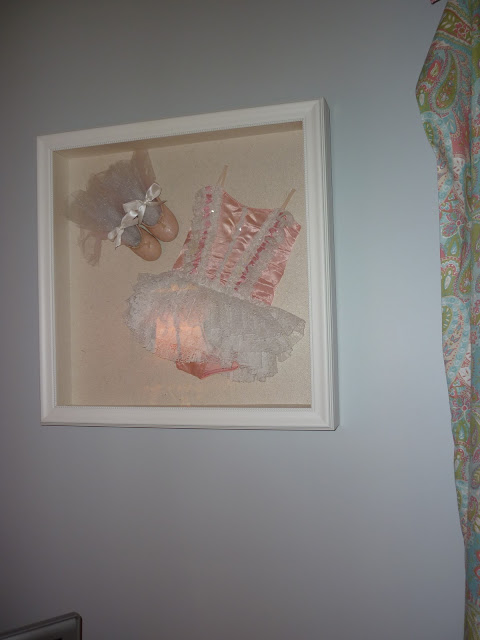 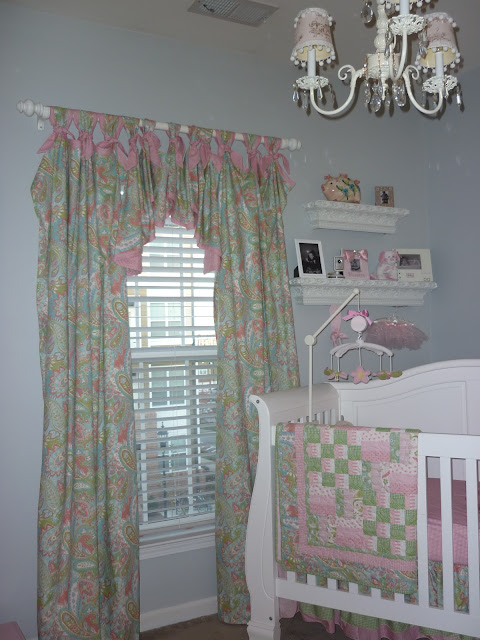 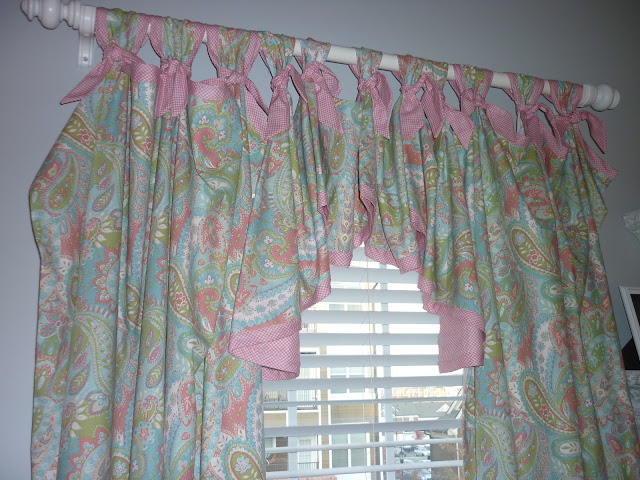 The one part of the nursery I hesitated posting is the TV we have in there.
In our defense, it was already in there and my SIL says giving the amount of time we'll be spending in there, it's not a bad idea.
It sits diagonal across the room from the glider.
Meaning, when I'm feeding Shelby I'll have the ability to be able to watch my DVRed shows if I choose. 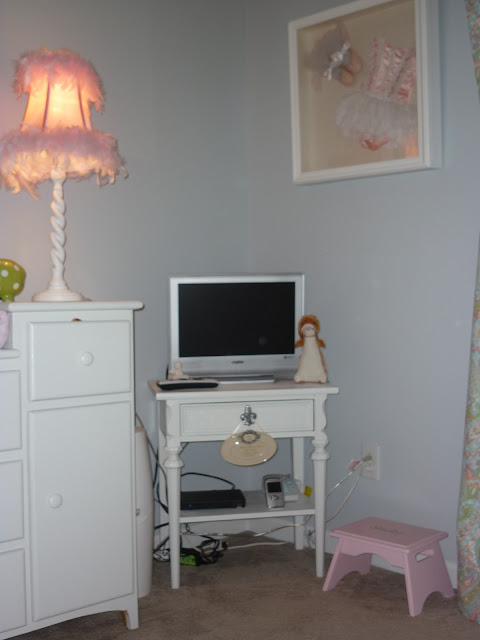 All in all, we're really pleased with how it all turned out.
I was even able to find a 'coming home outfit' for Shelby that matches the room that I can later shadow box.
(I know, I'm a bit ridiculous) 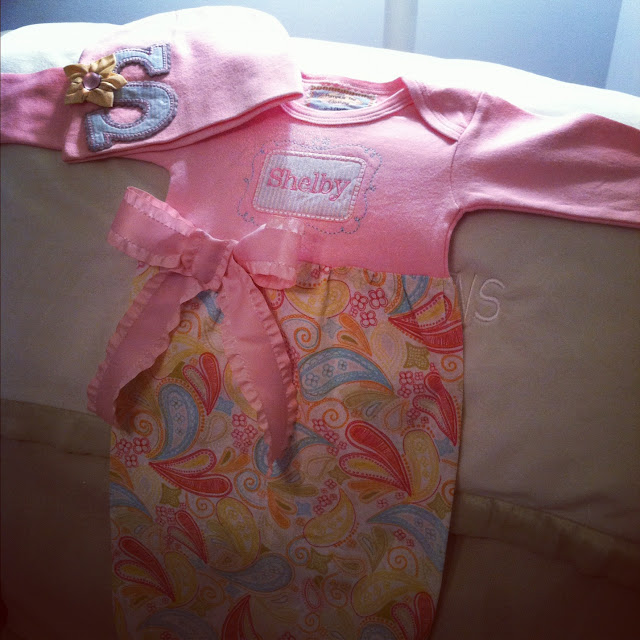 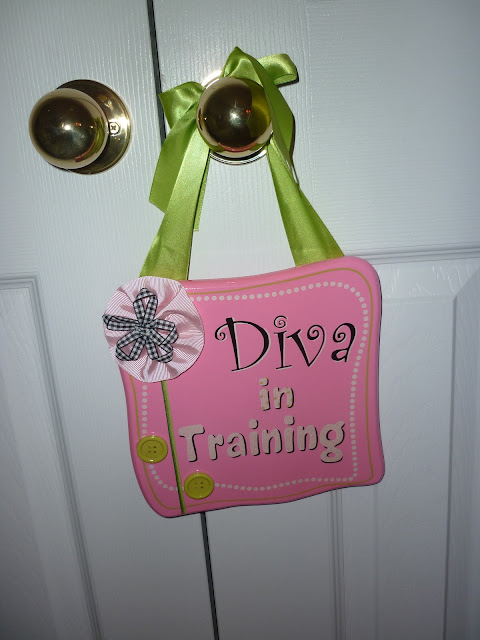 That's it for the nursery tour!
I hope you enjoyed!

Now we just need Miss Priss to make her way into this world to make the room complete!!
I am getting more excited and nervous as the days dwindle down!!!
Posted by Dee Stephens at Sunday, November 11, 2012

You did an outstanding job on her nursery. It is beautiful. I love the shelves white. What a great idea. The whole room is lovely.

So so cute! Just as I pictured it!

I love how the bed is caddy-corned. It looks so sweet!!! And you know I adore the ballet shadow box!

Super cute and adore her coming home outfit too!

Precious!!! BTW, will you email me your address again!?

Shelby's nursery looks amazing! You guys did such an incredible job! I love the colors. The shelves look great in white! :)

And for just a second (before I looked more closely) I thought you had another dog, but it's a stuffed animal! So cute!

Love all the sweet touches including cherished memories of your youth. She's a lucky little lady!

It's beautiful!! I love it. It's amazing how much goes into it. Can't wait for you!

Such a sweet room!!

Gorgeous, just gorgeous. It is so feminine and pretty ... a perfect fit for her! Great seeing you yesterday :)

I love it! Perfect for a lil princess.

Gorgeous room, Dee! You will be happy that you didn't make it too babyish. TM's room is still the same fabrica and wall decor from her nursery.
So cute!!

It's beautiful! Your attention to detail was spot on and I love that everything isn't brand new. Mixing your baby things with consignment pieces really makes the room look so cozy and just the way a nuresery is supossed to look! Bravo Mama... I'm sure that was a huge chore to tackle!

Amazing job!! I love all of it.

Dee it is amazing - even more beautiful than I thought it would be! Love everything about it, even the tv!!!!

I can't even find the words. Wow!! This room is absolutely darling. Every single details...I love it! I knew it was going to be incredible, but this is just beyond precious. You will share so many special moments with Shelby in that sweet room. And thanks for the comment on my gift wrapping. :) I think I got a similar idea from Pinterest, and just decided to use photos instead. I love how they are turning out.

OH MY GOSH!! Her room is PERFECT!! Holy cow! Please come do my baby's nursery?? Ha ha. Seriously though! I've been so bummed to not be able to decorate her room but we are moving shortly after she's born so there's just no point :( But you guys did an amazing job! My favorite is definitely the chandelier! When we do finally put together a nursery for baby girl I think she needs a chandelier as well :)

What a lucky little girl Shelby is! It's beautiful!

Shelby's nursery looks darling!!!! Y'all did such a great job. She will love every minute she spends in there. I love the shadow box with your old ballet shoes and outfit. So cute!
And yes - a T.V. is a must. :)

The nursery is precious! So sweet and perfect for your baby girl! Love both of the shadow boxes.

I love this!! You're going to be such a fantastic mother:) it shines through your words. Little girls are so fun!

Everything looks so good! Thanks for the tour. Hope you are feeling well! SO CLOSE!!