We are a thousand dollars in the hole today after what was expected to be a routine dental visit for Buddy went awry.
UGH...
I had Buddy's teeth cleaned 5 or 6-years ago when I was single but honestly I/we, have put off doing it again because it's expensive.
Word to the wise.
Don't put it off.

He's nearly 8-years old now and I told Brad that we really needed to bite the bullet and have his teeth cleaned before Shelby arrives.
So, we did.
His last few vet visits they've looked at his teeth and said they didn't look bad.
Well, they were wrong!!
We took him in yesterday only to get a call a few hours later saying Buddy has major gum problems and periodontal disease.
Three of his teeth needed to be extracted because the roots were exposed.
Pooch has been in pain and we didn't know it!

Anyhoo..the total bill for the teeth was $900-something but we had regular shots done too, so the final tally was over $1,000.
Not exactly what we were planning.
Who knows whether it would have saved us money and Buddy pain, if we would have been more preventive.
Some breeds have dental issues and some don't but one thing is for sure their overall canine health depends on it.

All in all, it is what it is.
I'm just glad it's done and over with.
Buddy is on the mend now but very groggy and out of it.
He has stitches and everything. 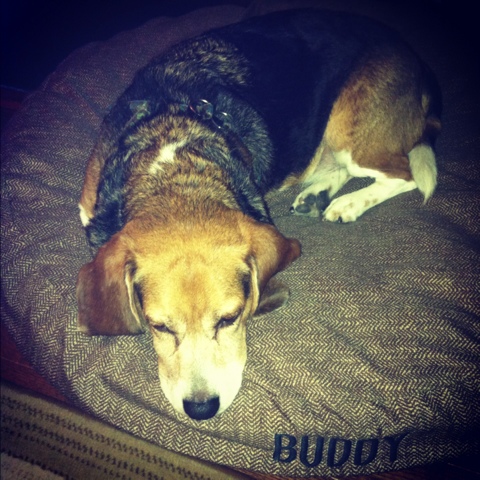 Brad told Buddy that his dental bill was his gift from Santa.
If only Santa was real....... 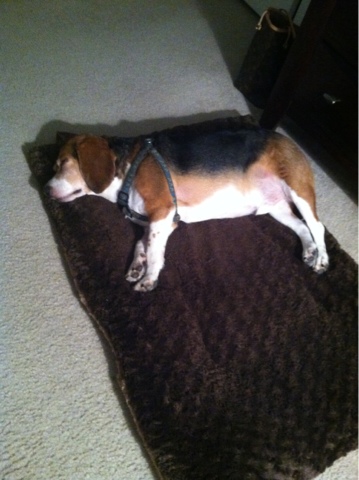 Ugh. That is insane! Poor Buddy and poor your wallet!

Oh no! I brush Cali's teeth (it's fun, let me tell ya) and I have her groomer brush them also, but a full-on teeth cleaning? Well, shoot... I need to put that pricey necessity on my list of things for Calz 2013!! Greeeeeat...

Aww. Poor Buddy! :( Hope he get's to feeling better. And that's so expensive for a dog cleaning. Hopefully it saved you money in the long run. If it helps in the future, I've seen commercials for these dog treats that supposedly help with dog tarter/bad breath/etc.

Oh no, hope he's on the mend very soon! Sick friends are no fun!

I love your beagle. Aren't they the best breed of dog ever? Such clowns but so loyal. I have two of my own and while they are nuts, I wouldn't trade them for the world.

Poor guy! I am so bad about brushing and really should probably look into this for both of the kids. Hurley has a heart murmer so I am hesitant to put him under if I don't have to. Woof!

That's exactly what happened to me this morning....except it was my 3 year old son! Yep, Hudson has 2 cavities and my total came to: $1,142.00 because they have to put them under to do the dental work (freakin' anesthesia is expensive!). UGH! I told Hudson, Merry Christmas!

I sure do wish Santa was real.

Poor, poor Buddy. Glad he's on the mend though and out of pain!

Poor Buddy. I feel your pain. My Max has had to have about 3 or 4 teeth extracted. Luckily, not all at once. Seems like every year I take him in for a cleaning, another tooth needs to come out.