Photo booths at weddings are the big trend these days.
I wish we would have thought to have one at our wedding but honestly, I don't remember ever hearing or seeing anyone do it until this last year.
Anyhoo..
The last few weddings we've attended they've had them and Brad gets more and more into them each time.
The most recent incident takes the cake.
At our friend's Katie and Josh's wedding instead of a per-say booth they had a picture area with a clicker so you could take multiple pictures at different times.
Brad and I went together and had a little fun but after seeing the proofs from the photographer I realized Brad kept going back.
I can't show them all to you but I almost peed on myself laughing when I saw the some 8 to 10 pictures of him alone.
Here's one of the funnier ones of us together.
Josh is an Arkansas Razorback fan so a Hog head was a must prop for their wedding photo booth.
We both laughed hysterically after taking this picture.
As you know I'm an LSU graduate and fan but went to high school in Arkansas.
We heard some other wedding guests got a little perverted with the Hog head.
Ours was considered 'mild'. 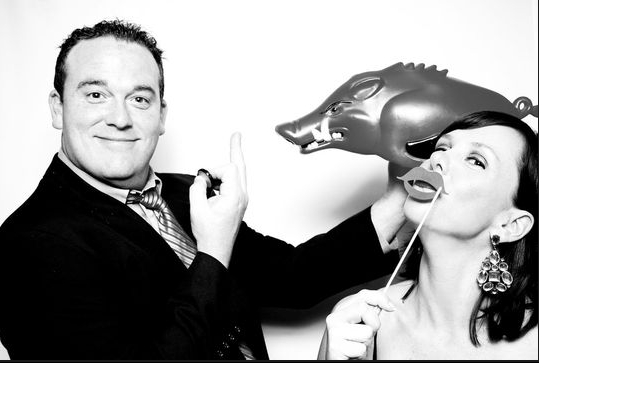 Then, one of the pictures of Brad by himself.
Again, this was just the beginning of some really funny ones.
When my cousin scrolled through them all her comment was.
'I know how to keep Brad entertained!'
HA!!! 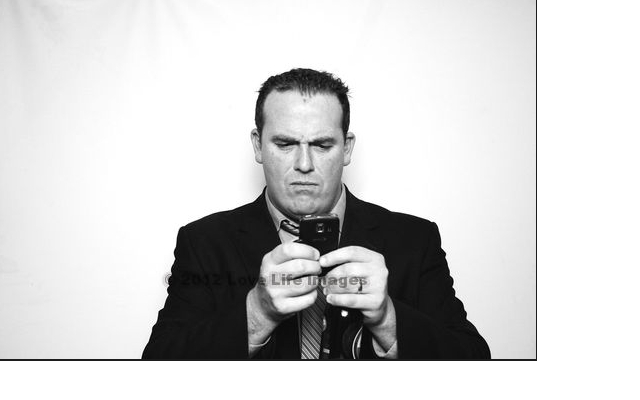 Did you have a photo booth at your wedding?
Or, do you plan to have one?
Do you like when they have them at weddings?
Posted by Dee Stephens at Wednesday, February 15, 2012

Love the pictures! We went to a wedding in December that had a photo booth but I have yet to see the pics.

Very funny!! That's a good photo of you two.

Too funny ~ great shots!
There was a photo booth at one of the Christmas parties we attended but I spent my time chatting ~ darn!

Also wish I had thought of a photo booth with all of the props. Some of the best pictures of weddings.

Brad is so funny and cute! Love it!

Oh Dee, I am just cracking up over here about brad's place card for V day dinner and now the photo booth by himself. I can totally picture him in bothnscenarios and it is giving me quite the chuckle :)

I really wanted a photo booth, but it just didn't make the budget!

Haha, these are funny. I didn't have a photobooth, but I have friends that have had them. I thnk they are FUN!

I've never seen a photo booth at a wedding before! How cool is that? Very cute pic of the two of you!