#1. Take an extra change of clothes for yourself at the hospital.
I had numerous people tell me that they over packed for their hospital stay and that I shouldn't even worry about bringing pajamas because I would stay in my hospital robe the entire time.
Well, that wasn't the case for me.
As you know Shelby was in the NICU right after birth.
Mom has to visit baby in the NICU.
I was glad I had packed a set of pajamas and slippers because that's what I wore down there.
I really wish I had packed an extra set of clothes because I felt stupid walking through the hospital in silky PJ's and slippers.
As for what type of clothes - bring pants that you wore in your 2nd trimester.
Your tummy is sensitive and you won't want any sort of band cutting in. 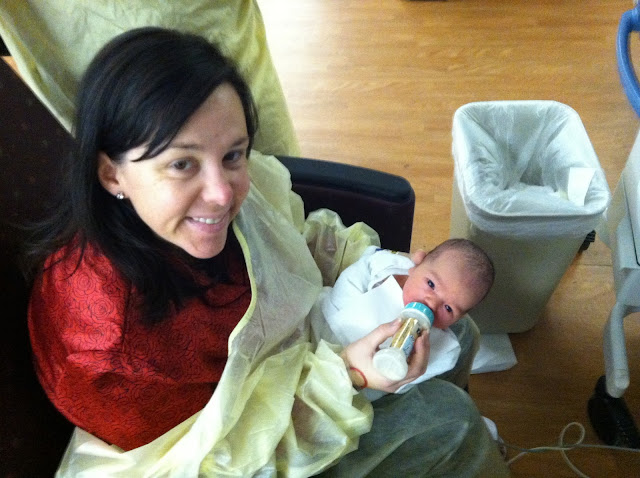 #2. They don't show you how to breastfeed right after birth.
I figured that they had some sort of lactation consultant on hand right after to show you what to do and how to do it.
NOT!
I was clueless, and as much as the nurses want to help they're really not equipped.
I truly think that was part of the reason Shelby turned blue and quit breathing right after she was born.
I was breastfeeding her and I'm not sure I was doing it right.
I still believe she choked.
That is the reason I chose NOT to continue breastfeeding.
I knew I was going to have anxiety every time I would have went to feed her.
I wanted to enjoy my baby not be so stressed out.
So she's a formula baby.
I was a formula baby.
Brad was a formula baby.
We're both fine.

#3. You swell up after giving birth.
No one told me this and I know that everyone has a different experience but I was shocked at how much I blew up.
I didn't deal with a lot of swelling during pregnancy so I had no idea what was going on when I started to swell.
I looked like the marshmallow man.
The doctors told me that it was all the fluid going to Shelby that had nowhere to go after birth.
It took a week or so for all of it to go down.
(look at my hands in this picture) 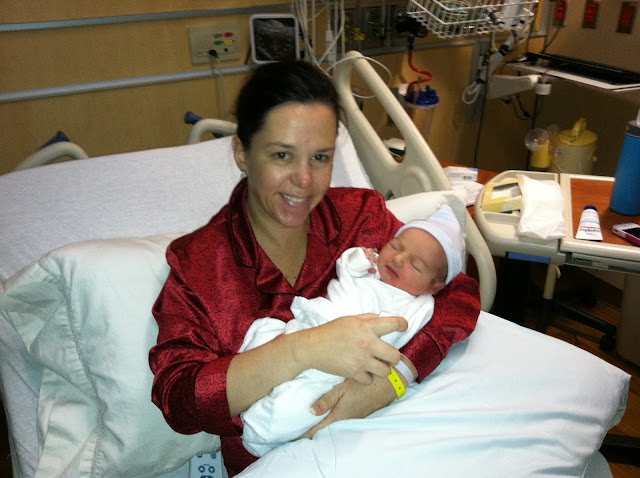 #4. Take the sitz bathtub home with you.
I got cocky and thought I wouldn't need it.
Well, I'm here to tell you.
Take it and everything else(and then some) they give you at the hospital home.
I'm still sore where I was stitched up and it's been 5-weeks.
I have to soak in a bathtub once or 2x's a day for relief.
This is normal according to my doctor.
It would have been easier to have the sitz tub instead of having to get my entire body in the bathtub each night.
Another word of advice which I had read about and did is to take stool softeners from the day you give birth.
You're going to need them!!

#5. Hospital visitors aren't ideal.
This is one that I had actually been told by a couple of people but I thought I would throw it out there again.
Other than immediate family, visitors at the hospital don't make sense.
In fact, for us, it didn't even make sense to have our parents there because we didn't have our baby at all.
After Shelby was born she was in the NICU and the parent is only allowed to take 1-person in there at a time.
Also, the rooms are small and you are tired as is Dad.
Have visitors stop by after you get home.

That's all I can think of right now but I'm sure there are other things.
I'll have to jot things down about life here at home and what we were prepared for what we weren't.
Happy Thursday!
It's a rainy one here and they're calling for snow tonight!!!
YAY!!!
Posted by Dee Stephens at Thursday, January 17, 2013

I cannot agree more about the need for women to see a lactation consultant directly after birth; by the time I was able to see one, my bobs were totally massacred.

Maybe the LC depends on the hospital? All of my friends were visited immediately by a LC. One of them who didn't breastfeed had to tell the nurses not to let them in because they were harassing her and making her feel guilty. My cousin is a NICU nurse and a LC...I know a lot more than I should about teh topic. Ha.

I'm going to have to come back and read all of this stuff again when the time comes! You give real and good advice! Kev and I were both formula babies too. I feel like the whole world is all about breastfeeding right now. Who knows what we'll do.

i'm TERRIFIED over the whole 'tearing' issue down there - *ouch* - and i had NO idea you swell up after giving birth! - i mean i don't know much about it or anything - at least i'm more prepared WHEN the time comes :o)

PS – my friend is gonna be on Millionaire Matchmaker on Bravo TONIGHT come check it out on the bog :o)

I felt like I was pushed into breast feeding the nurses, LC, everyone was pushing to have me breast feed. I have to say I agree with everything you mentioned ...

i need to bookmark this. all of this was news to me. did you deliver at Novant or Carolinas?

It amazes me all the secrets girls never tell each other. :) This is a great and honest post! I never knew people swell up after birth. They are calling for a bit of snow here tonight as well, but I do believe y'all are getting more. I was going for a run after work, but can't decide if I should...who knows what will start falling. :)

I agree! My sister just had my nephew 6 months before I had Lyla, so she did tell me everything you have on your list :) I had 2 sets of PJs, slippers & my own robe. I took the stool softeners. I didn't have to do that sitz tub, but I did get a ton of those cold packs! Oh, and the mesh panties!! I still have extras that I plan to keep for baby #2. And yes, I think you are totally left alone on the breastfeeding. I had troubles and Lyla lost weight, but we got it all worked out. Glad you are sharing all of this info!

Loving all of this info! Definetly packing it away in case I need it one day!

Thank you for the amazing advice!! I love finding people that are straight fwd! I am due in April!!

What awesome advice! I need to remember these when I have children!

These are great! Thank you! I already know I don't want a lot of people hanging around the hospital for too long. And after knee surgery I learned a little about what it's like to stay in the hospital (I way underpacked and hated it) but a lot of this I hadn't even thought of. My doctor said they offer breastfeeding classes before - do you think that would have helped at all?

:( that there was no LC for you. Anika latched the second she came out of me, but an LC was in there moments later to check on her latch and kept coming back even when I said we were all good. Certain hospitals are recognized as "Baby Friendly" By the World Health Org. and UNICEF and that means they support BF'ing. I went to the one Baby Friendly hospital in my state (there are now two). I know a lot of hospitals really lack the proper support and thats sad to me. I love attending my LLL meetings and hope to become a LC one day.