I've been talking for years and years and years about doing it, and it finally happened over the weekend.
I made a Mardi Gras King Cake!!!!!!
I generally get lazy and intimidated and just order one, but this year I was told World Market had a 'kit'.
Friday I decided to go and get one in order to give me something fun to do with Shelby.
Girlfriend has learned over the past year what Mardi Gras is, especially with her tree in her room now.
She was excited about a 'King Cake'!!
(yes, i'm the cheese ball that had her dressed for the occasion) 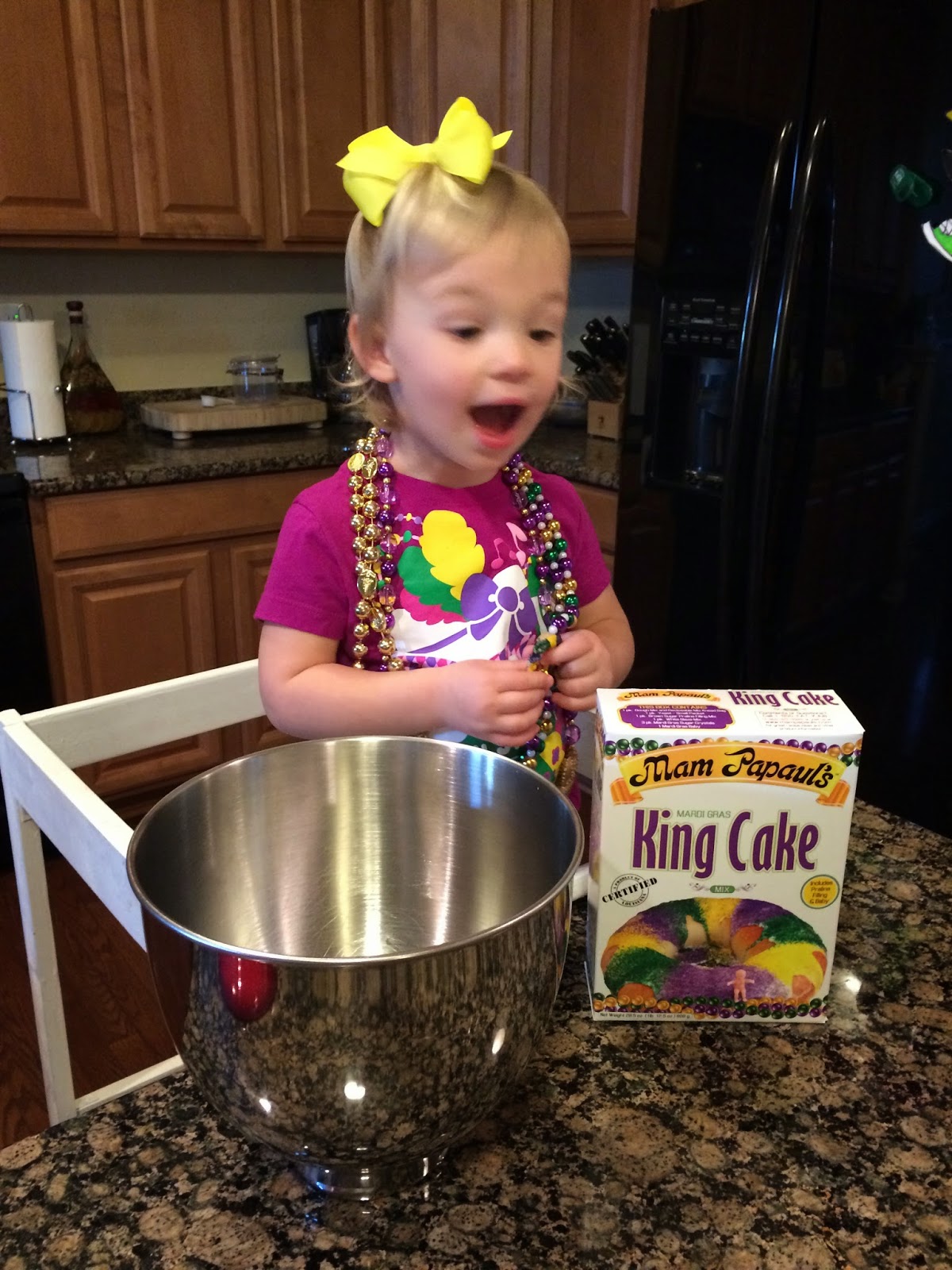 The kit comes with a large plastic Ziploc bag to knead your dough in, but there were also directions on how to do it with a commercial mixer, such as a Kitchen Aid. 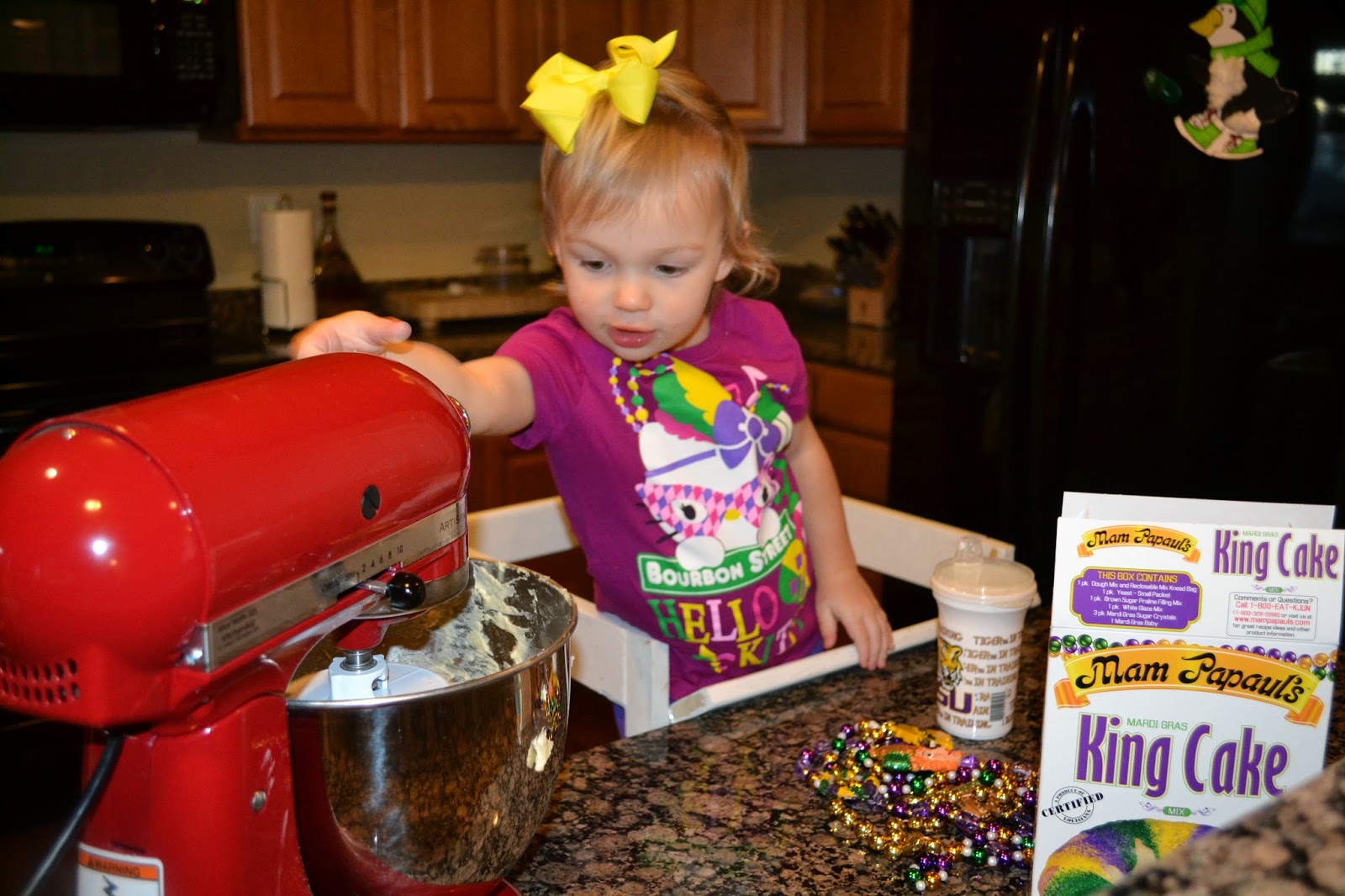 That's the route we took.
I can't say enough good things about my Kitchen Aid.
Best investment ever. 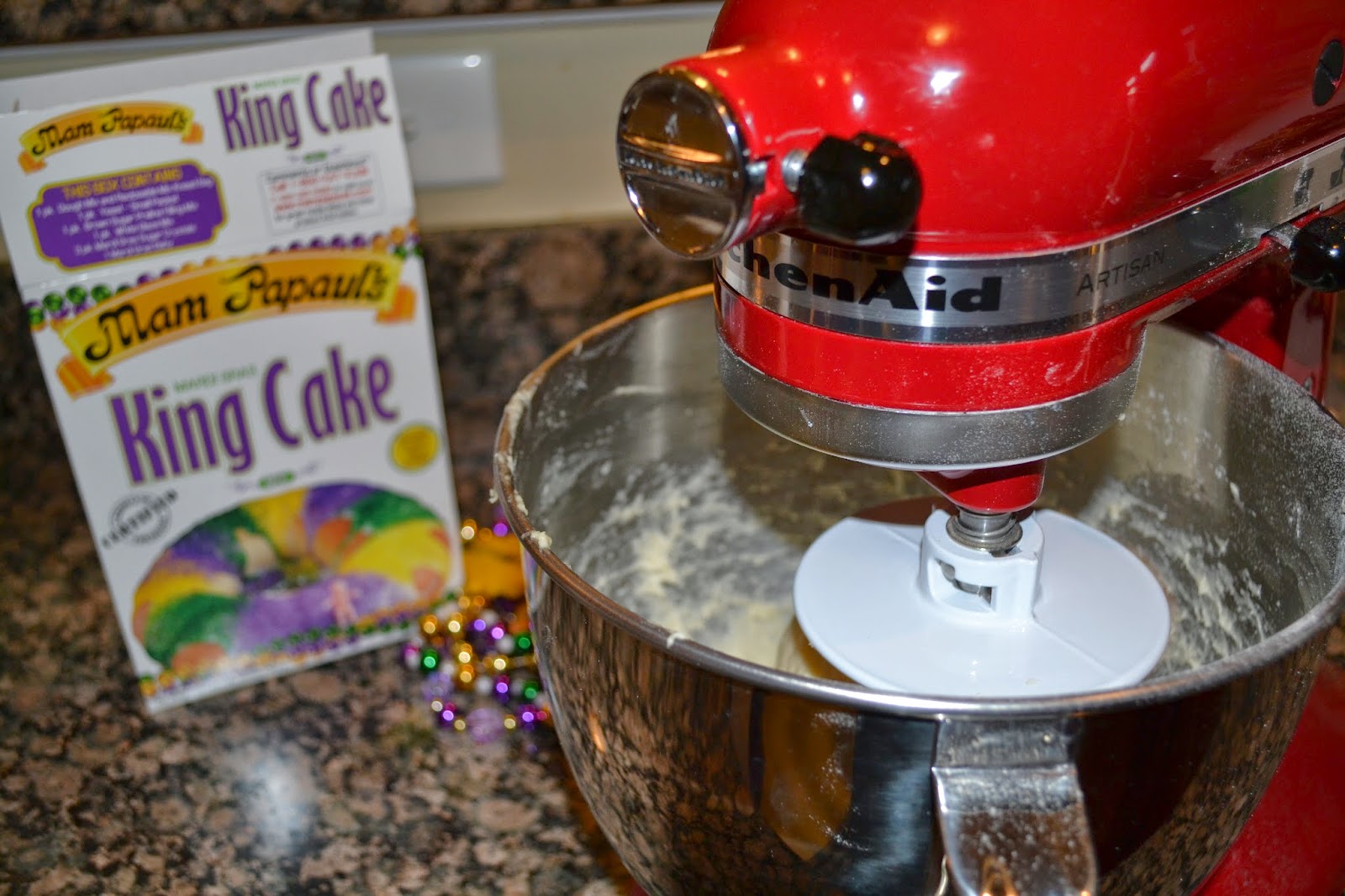 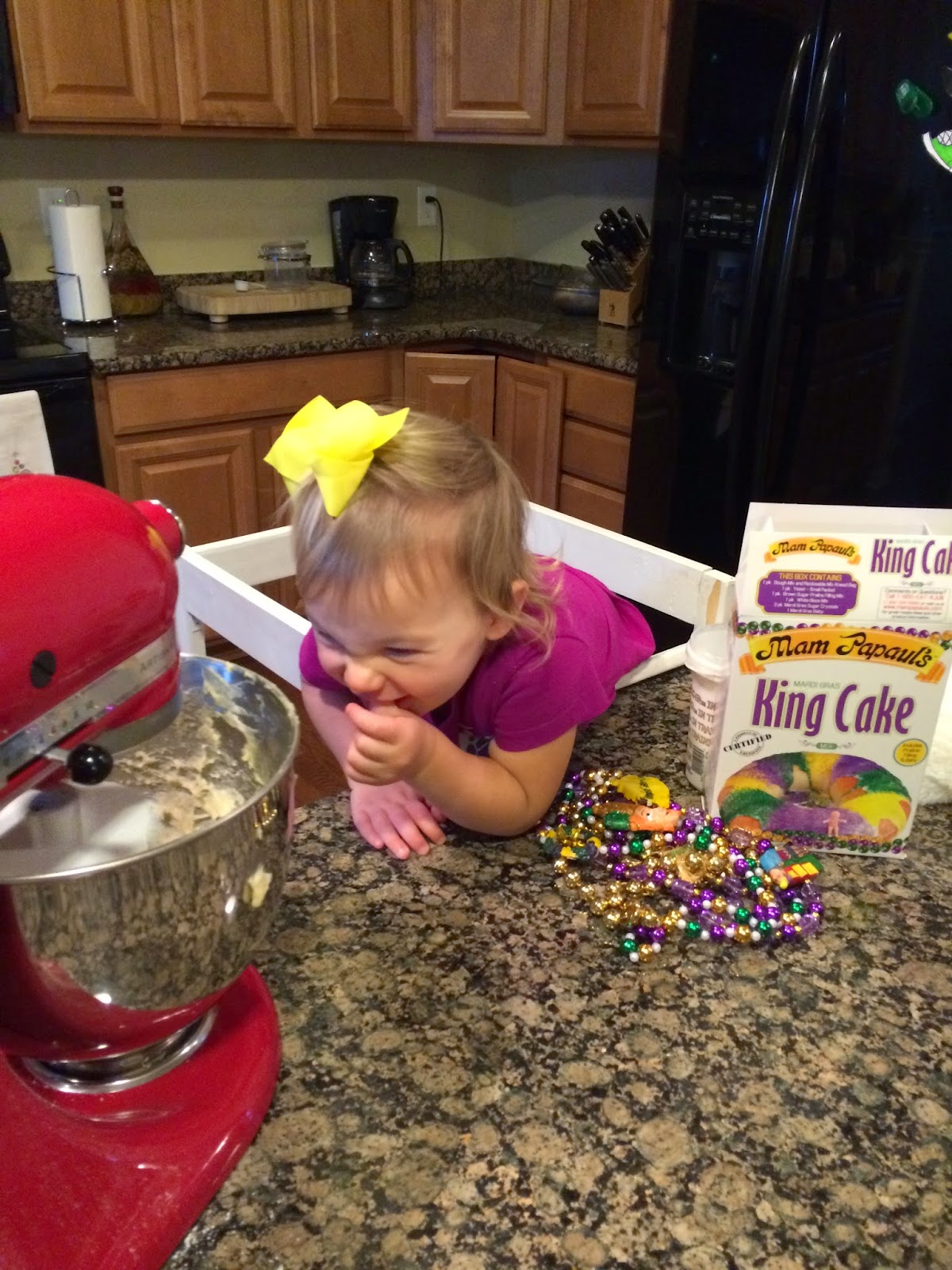 The kit tells you to let your dough rise for 30-minutes on a warm oven, but if I make another one before the season is over, I'm going to let mine rise overnight this time to keep it from being as 'doughy', after being baked.

Shelby loves helping and has really gotten good at helping roll dough out. 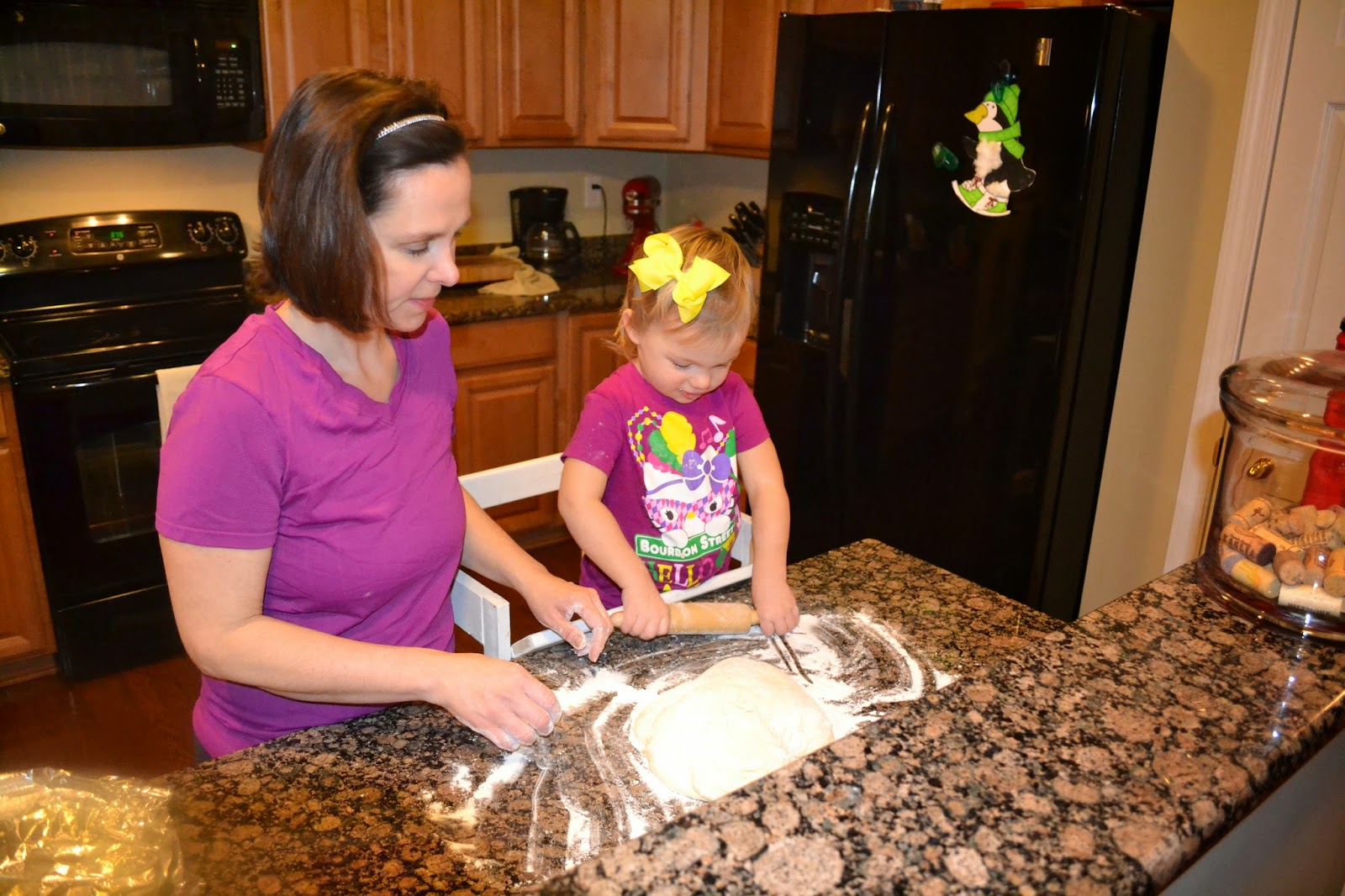 We rolled it out into a large rectangle as directed and prepared the praline mix that came with the kit and threw a few nuts on there as well. 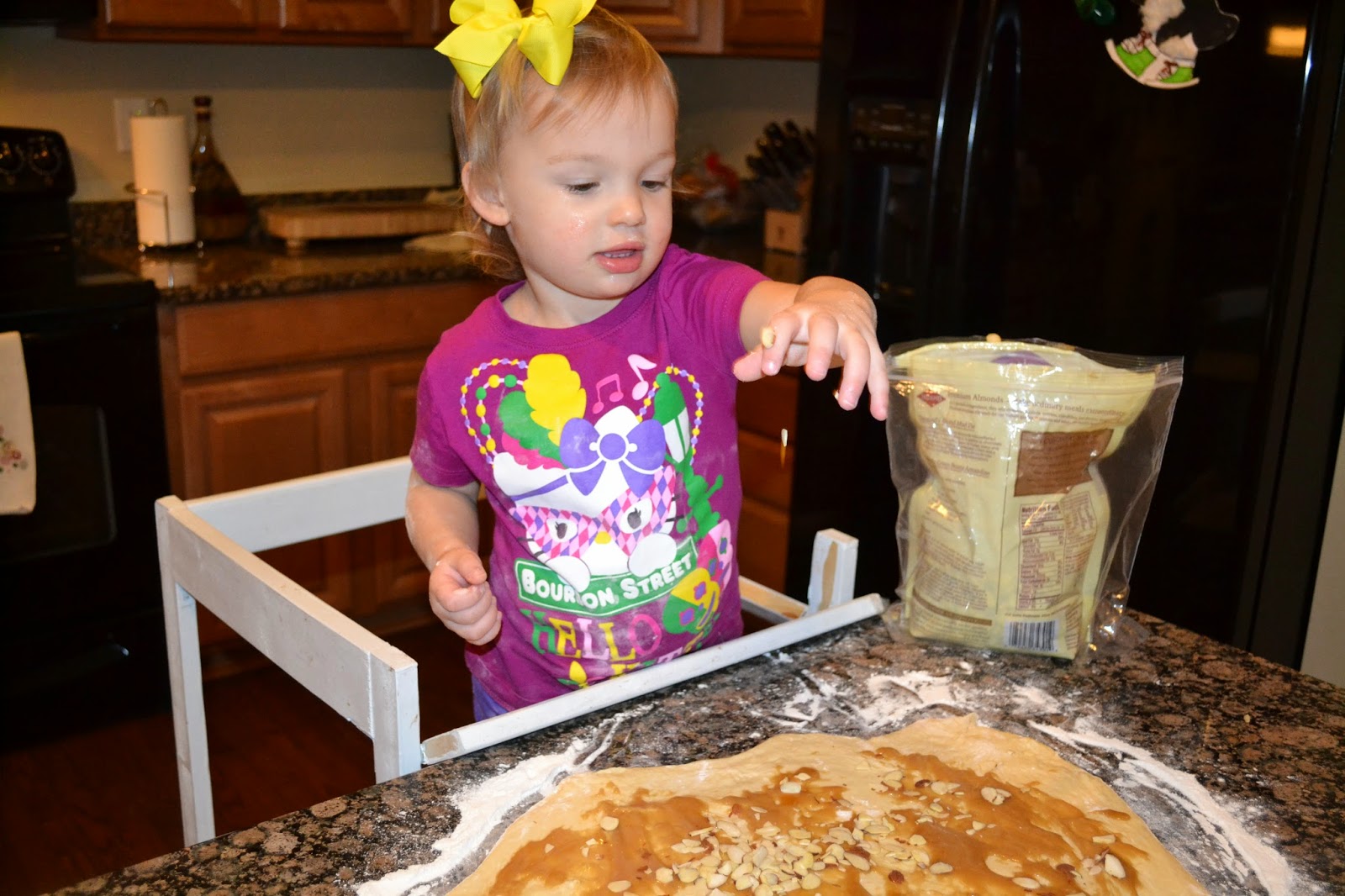 I think again, if I decide to make another one, I might do a different filling, such as a cream cheese.
That's always my favorite!! 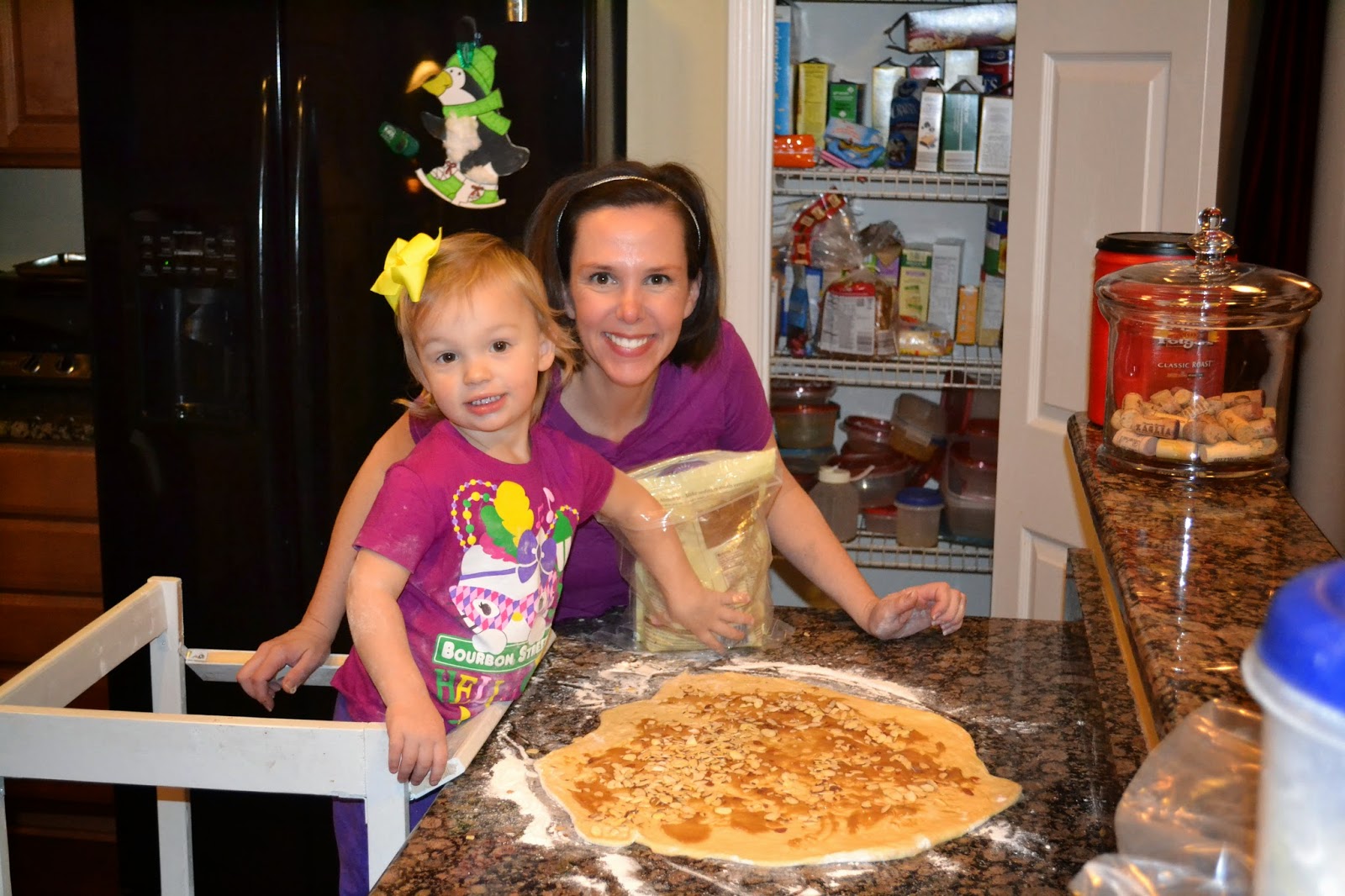 Once it was all spread out I rolled it up into a jelly roll and baked for 30-minutes. 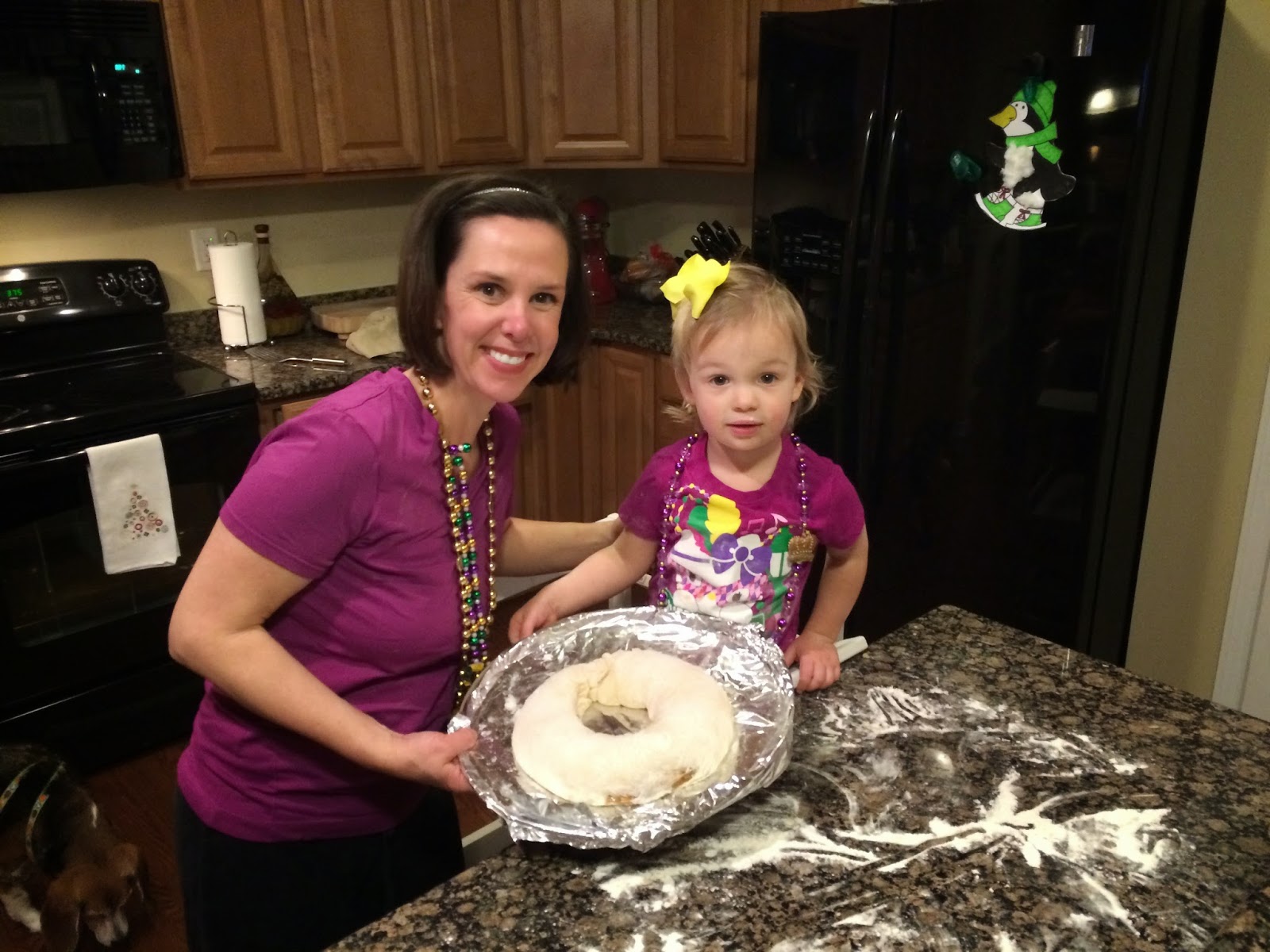 After it cooled, we used the icing mix to coat the cake then came the colored sugar sprinkles! 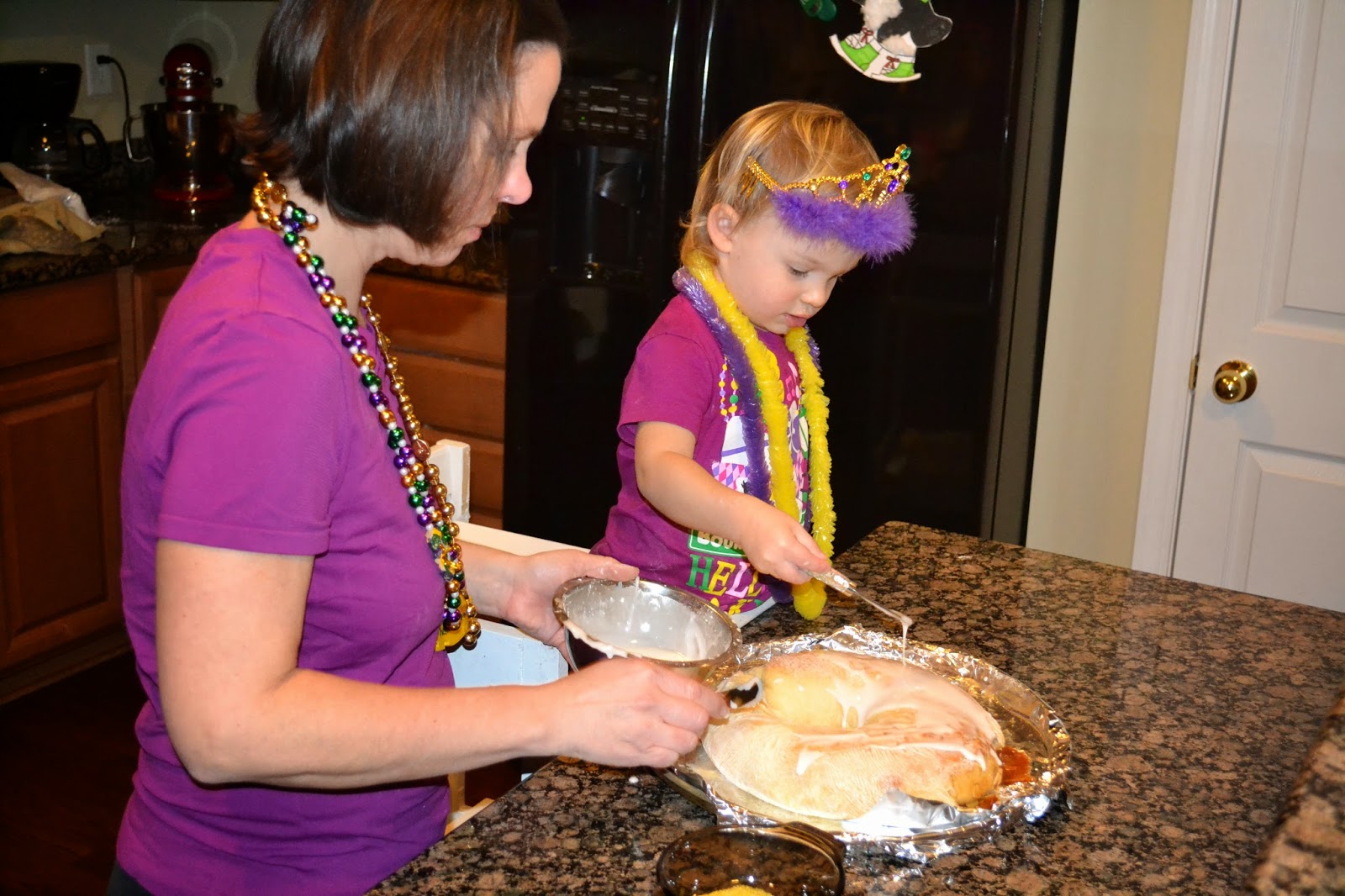 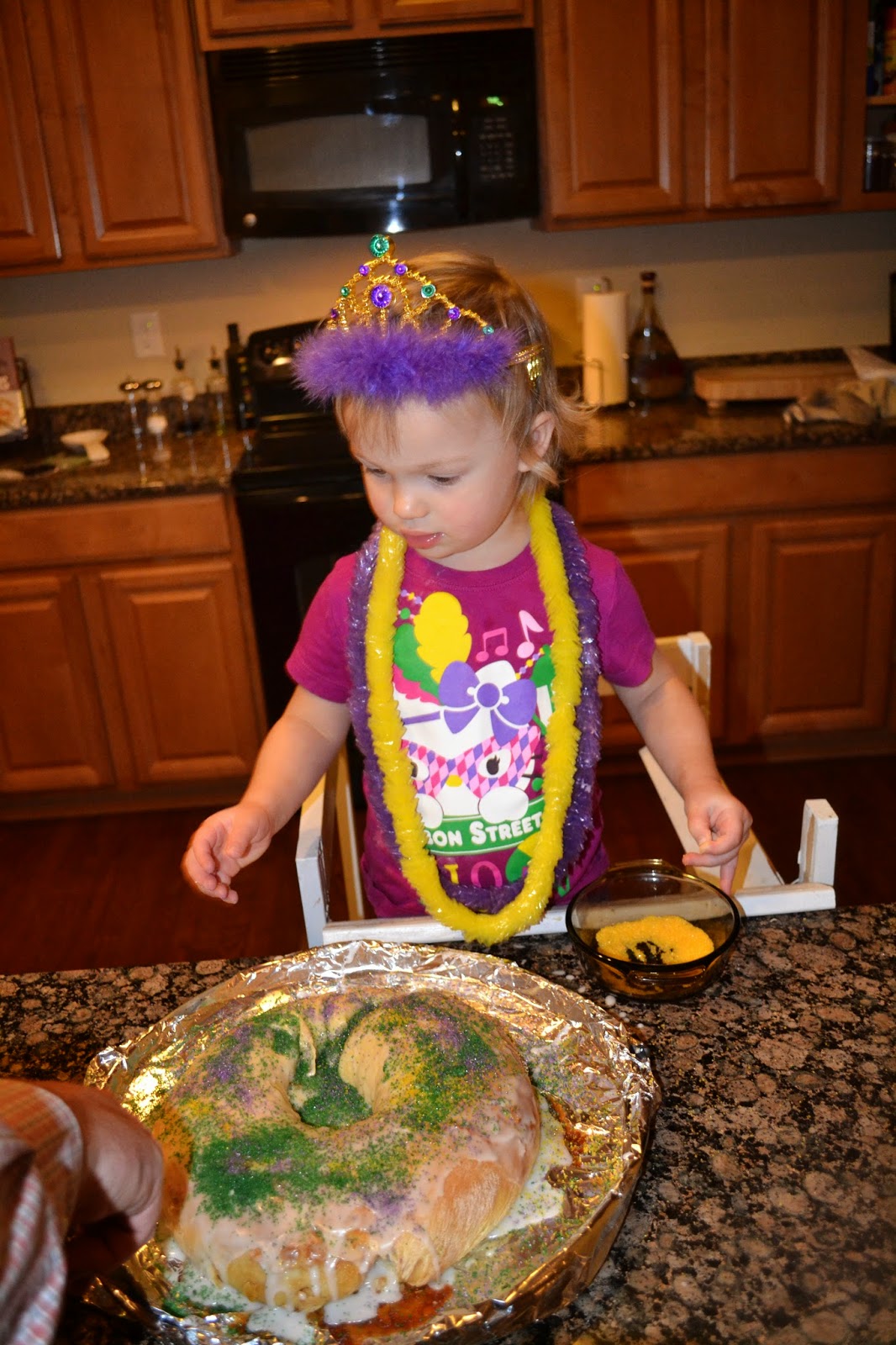 The baby is put into the cake after it's complete in a discreet location by poking it underneath. 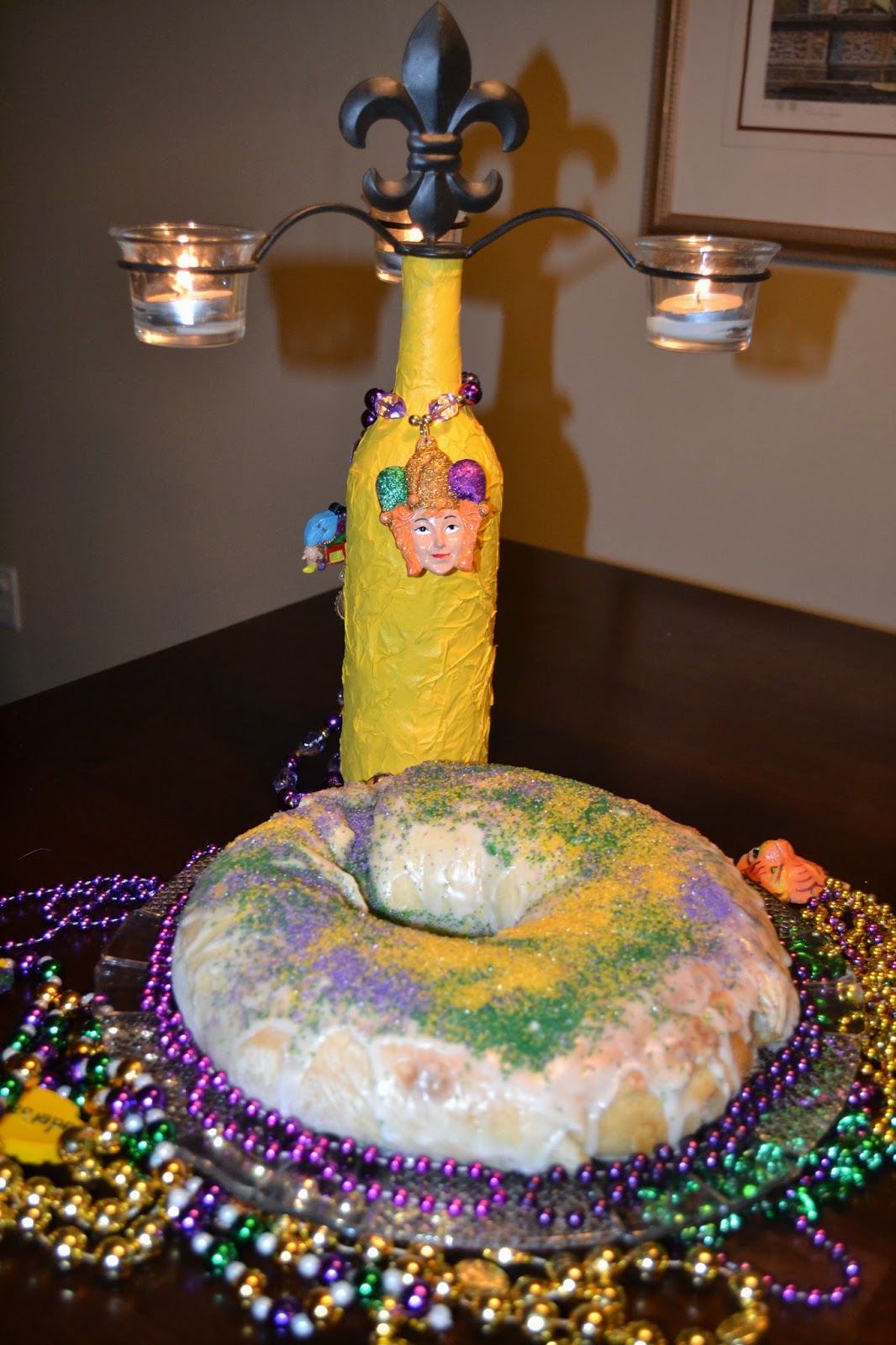 We brought the cake to a cookout at my cousin's house and her husband got the baby!! 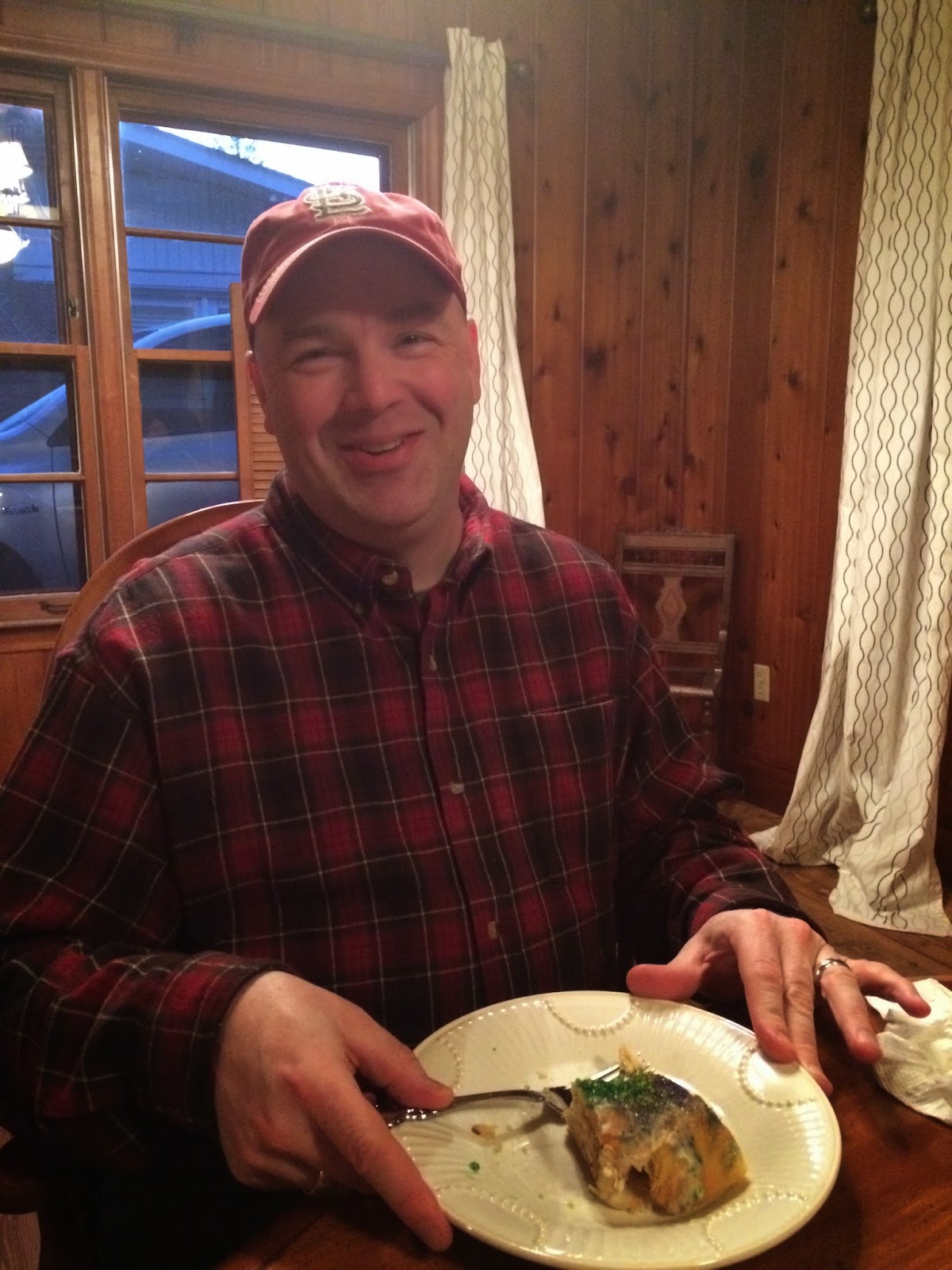 Overall, it was super fun, easy and the cake was tasty and not too sweet like ones you might encounter from New Orleans bakery.
Now, here's the funny part about this kit.
I posted about our baking session on Facebook and forgot that the company who produces it and other Louisiana products was started by one of my college best friend's in-laws!!
I was even in her wedding but totally forgot about it!
HA!!
Talk about a small world!
Happy Mardi Gras!!
Posted by Dee Stephens at Wednesday, January 21, 2015

I can tell right now we will have a Chef in the Family. By the time she is 4 she will be baking here own recipes.
Dad

such a fun thing to do! tasted great too.