As I've made it very well known here on this blog, I love LSU, and I also love my sorority, Delta Gamma.
So, what's better than being able to take Shelby down to the Red Stick and be able to trick or treat on sorority row?!?!
They've been doing this for several years and it's a huge hit because sorority row is positioned on the lakes that surround the University and it's just beautiful.
Not to mention, it's fun for the adults and kids!
Everyone participates including the LSU cheerleaders, dance team and even Mike the Tiger himself!!
Check out his gator costume! 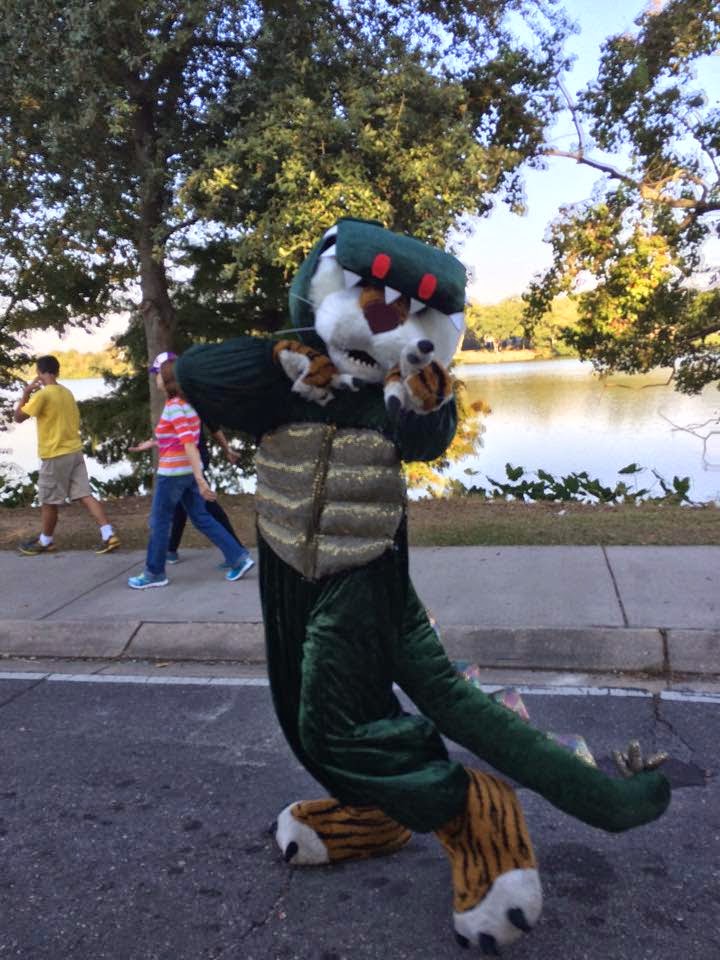 Shelby wasn't sure at first what was going on, even though we did this last year, but it sure didn't take her long!
One of the first stops was the Dee Gee house! 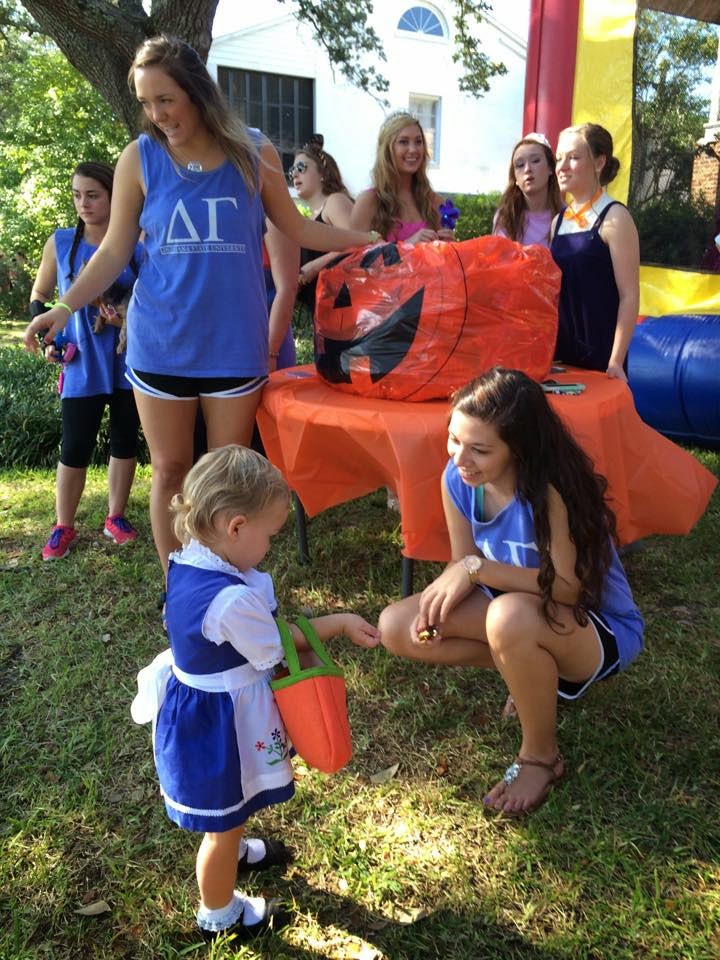 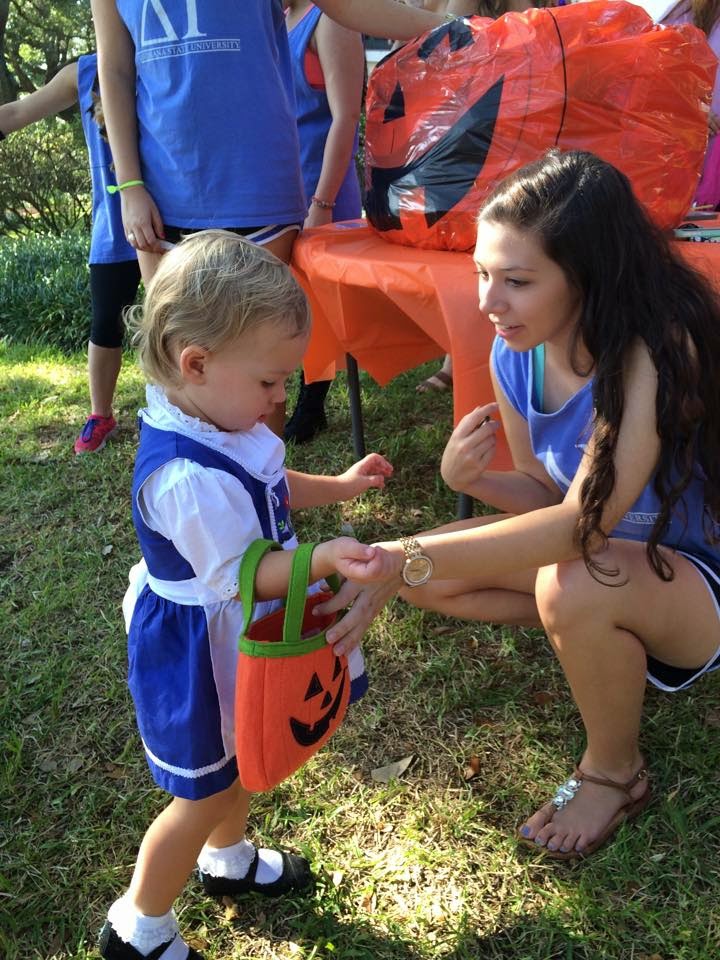 As you can imagine, this is a very popular event.
Hundreds, maybe even a thousand people show up.
It's so fun, that it has coincided with Homecoming the past 2-years.
I'm hoping that it will be the same this next year. 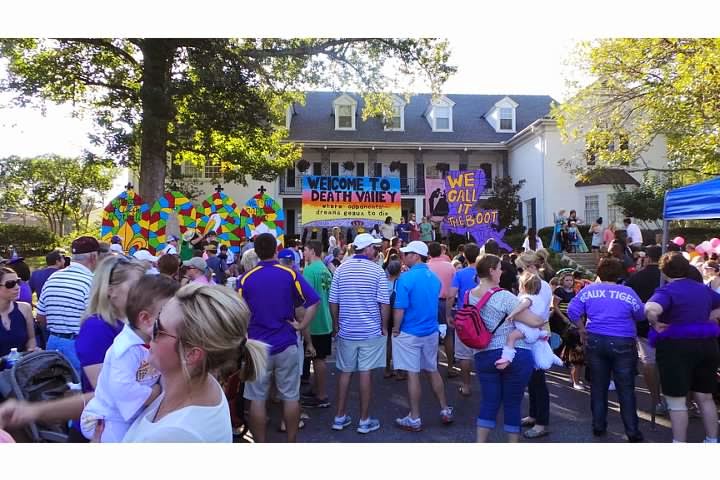 We went with my best friend, her sister and a few other people then proceeded to see all sorts of friends and sorority sisters.
We even saw a few of the Golden Girls!
The older girls were smitten! 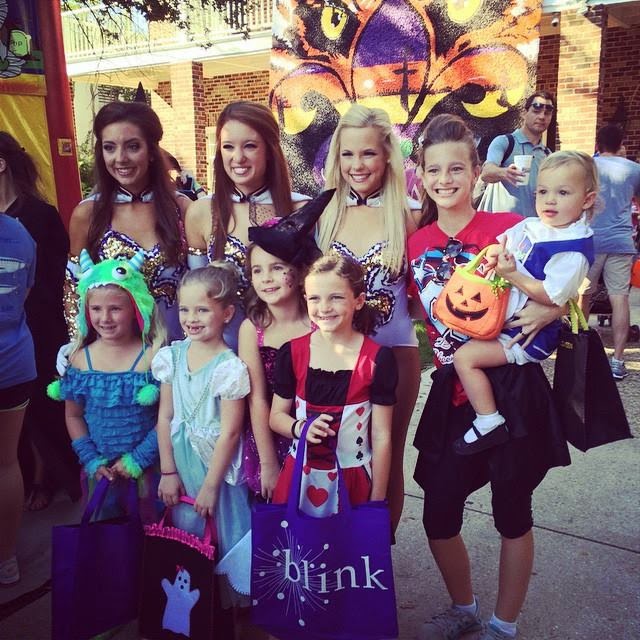 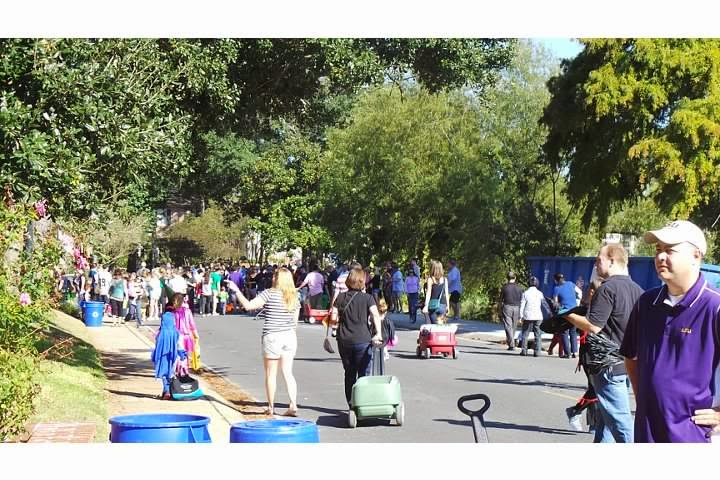 It was nearly 90-degrees that day, and I was so glad Shelby didn't have a hot costume.
The little German dirndl she wore, was actually mine at her age.
My Dad was stationed in Germany so it's a legit outfit.
And you know what?
There were no other kids with her costume! 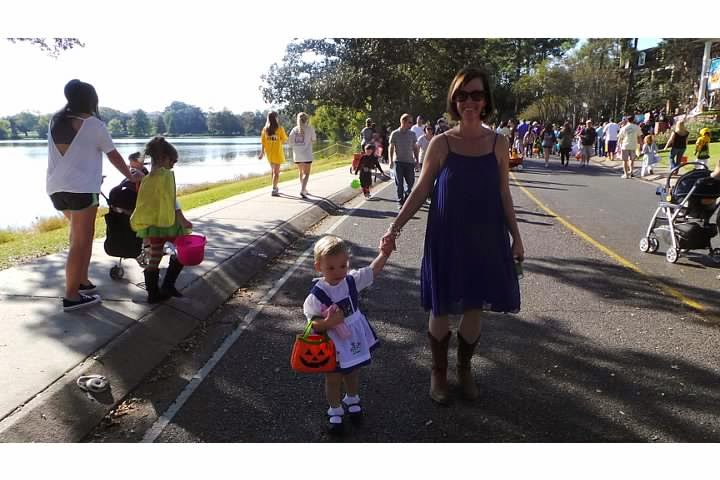 Shelby quickly got into receiving candy and wanting to eat it right then and there!
My niece gave her a few pieces along the way, and it was on.
She was WIRED after several mini candy bars, Airheads and Twizzlers.
I was a bit annoyed, but realize it is what it is. 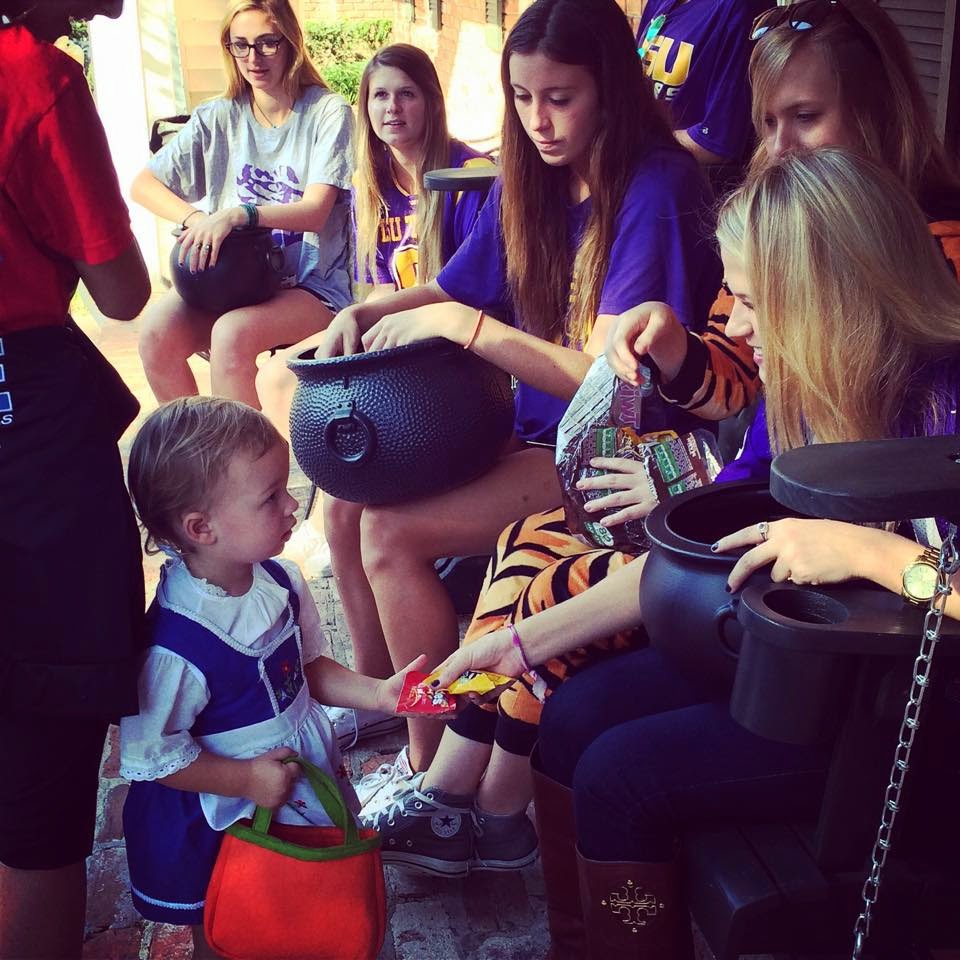 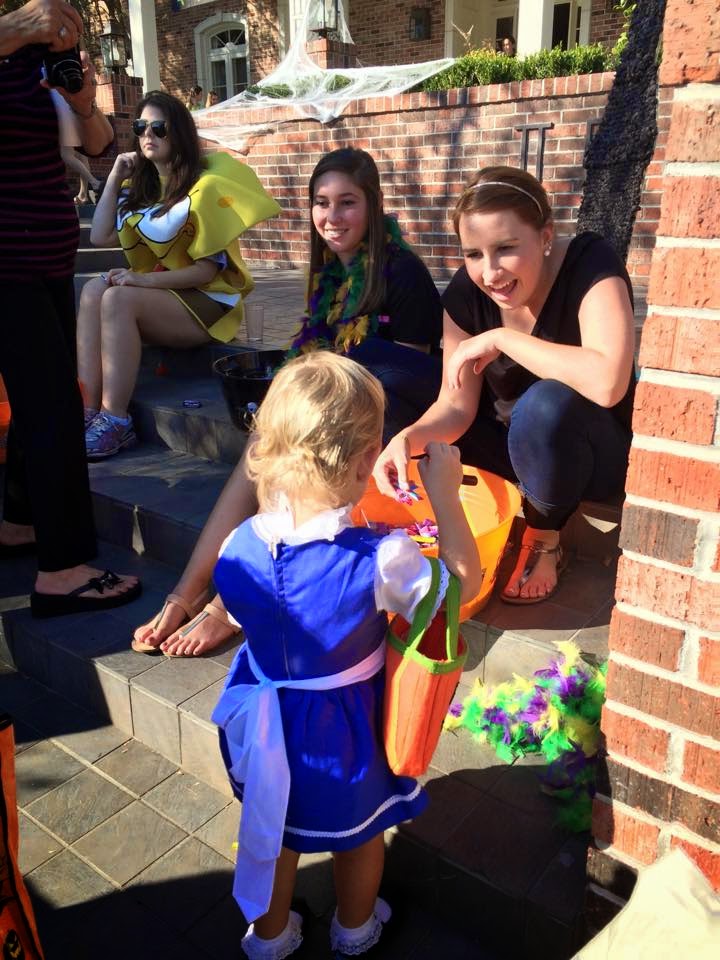 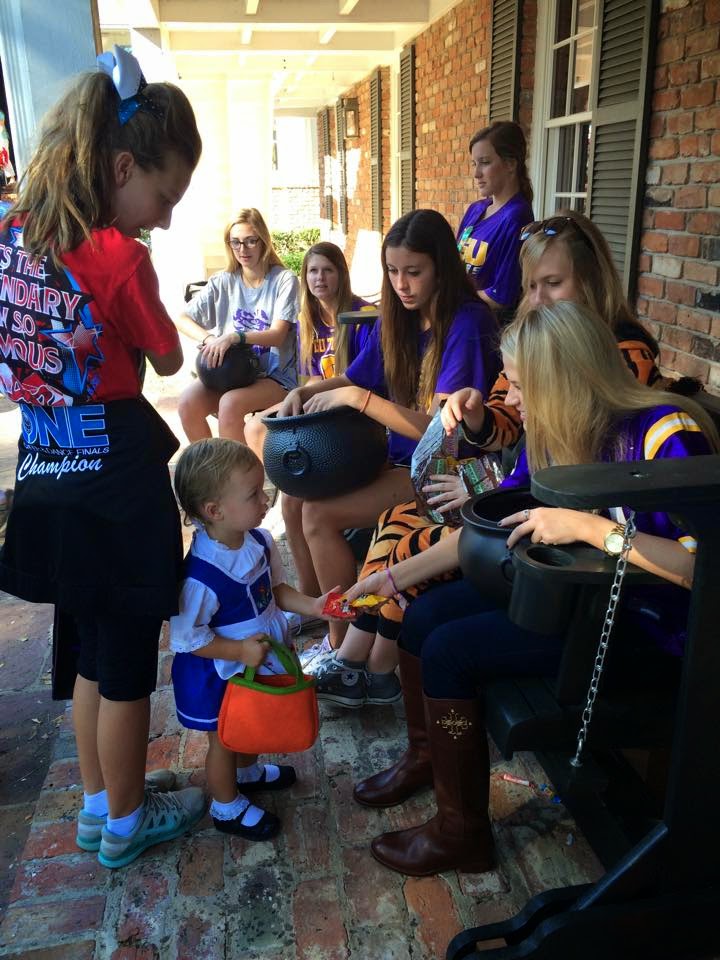 There were dozens of Elsas and Olaf's to be seen.
Check out how creative this is! 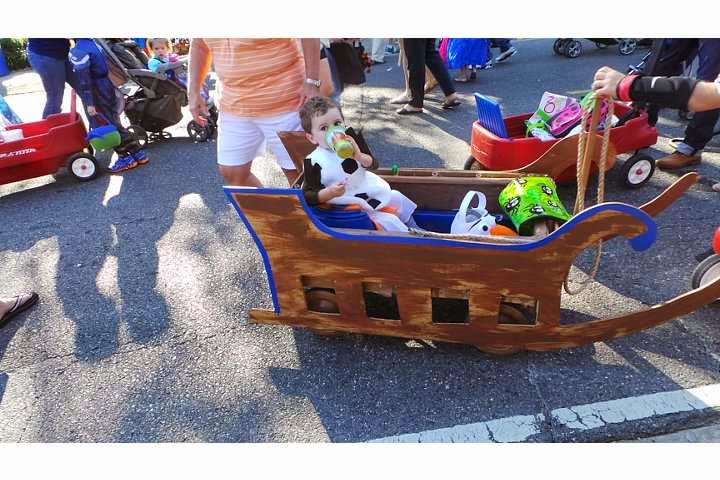 But this was by far the best costume we saw out there.
Sleeping baby as a mouse.
Soo creative! 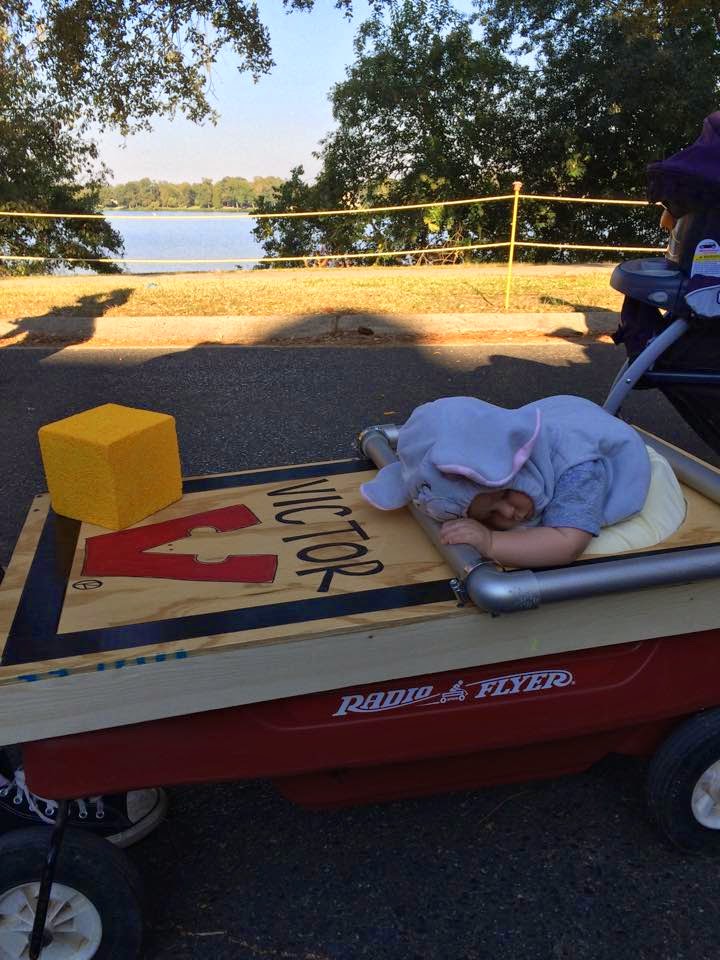 Believe it or not, I even ran into my very first boyfriend who I started dating at age 14 and dated off and on all throughout college.
We're still in touch and friends.
He was with his nephew and 3 young children. 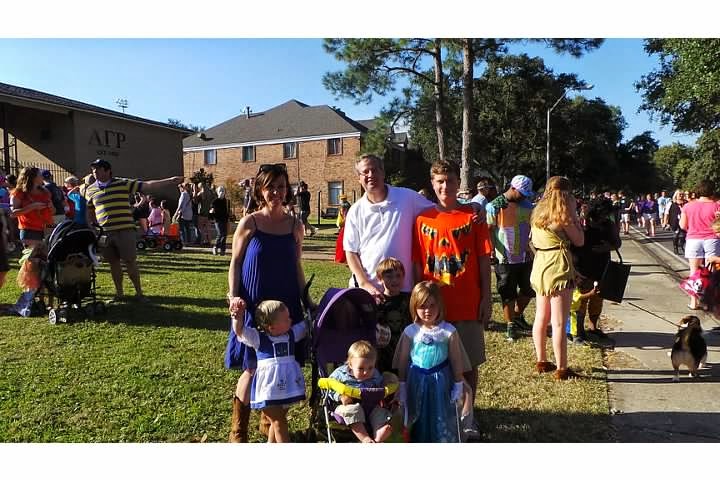 As I mentioned earlier, I was out there with my best friend who happened to have twins back in the Spring.
How cute are baby Colette and Caleb??
Shelby was smitten! 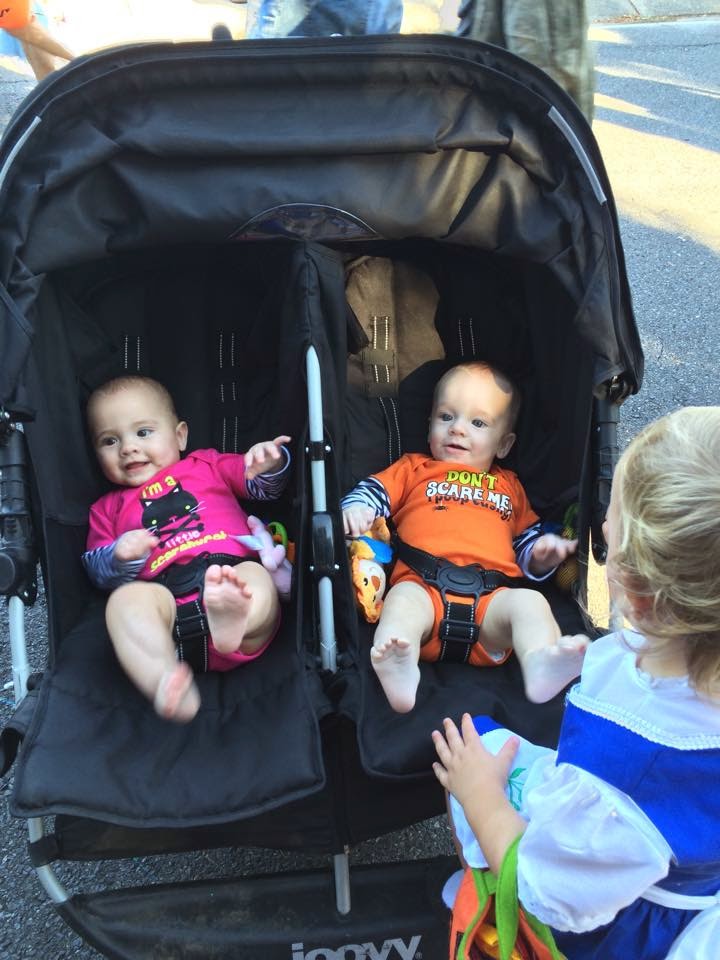 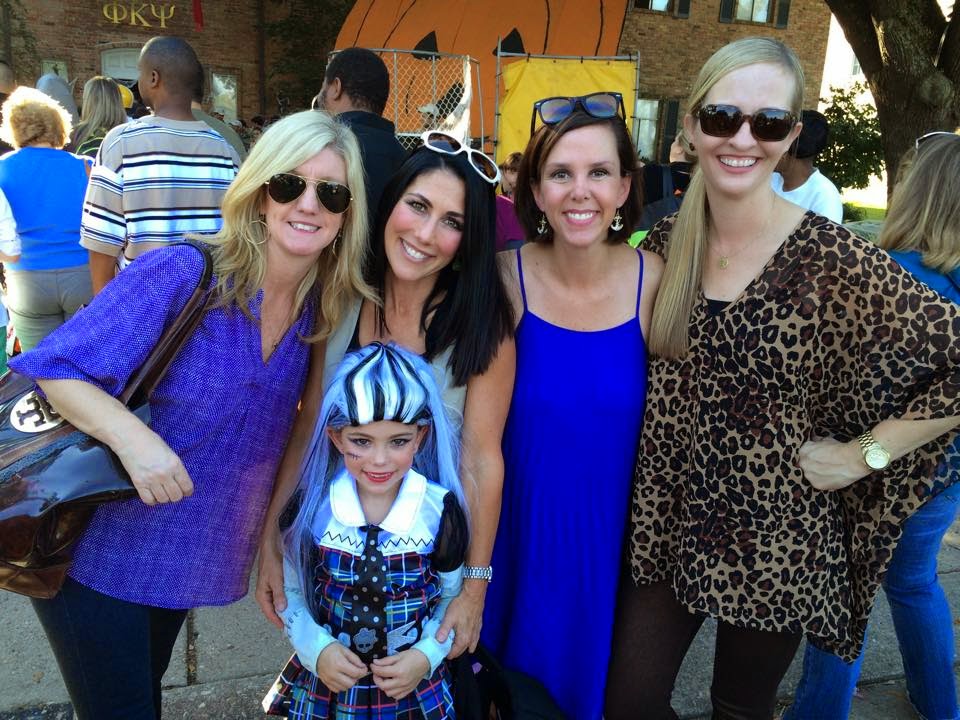 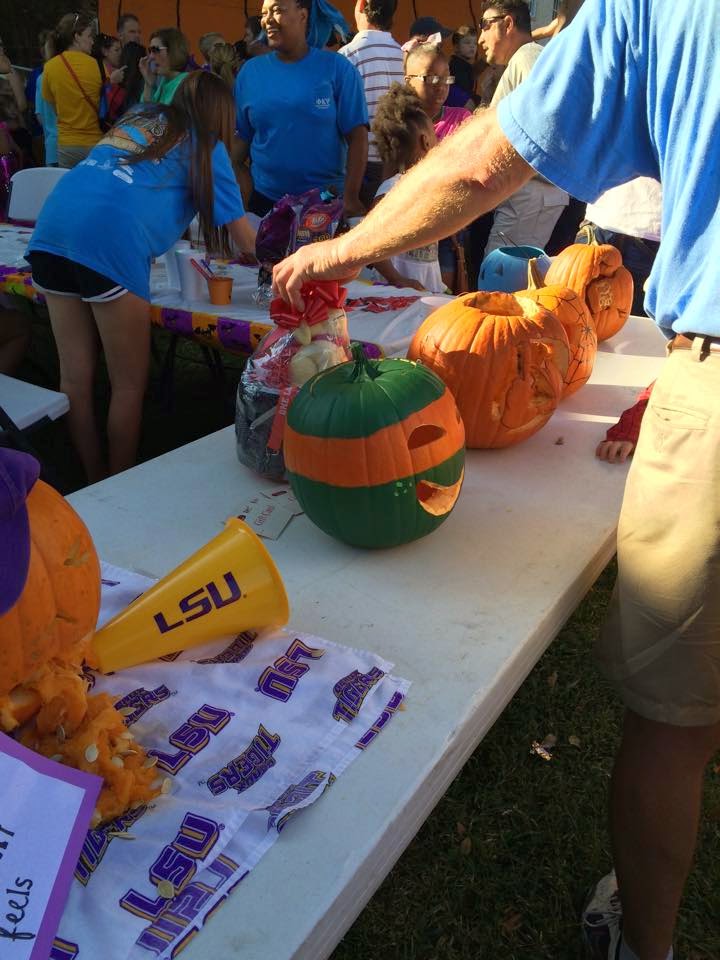 My Mom just LOVES this event, even if it was more work doing it with a toddler versus a 10-month old. 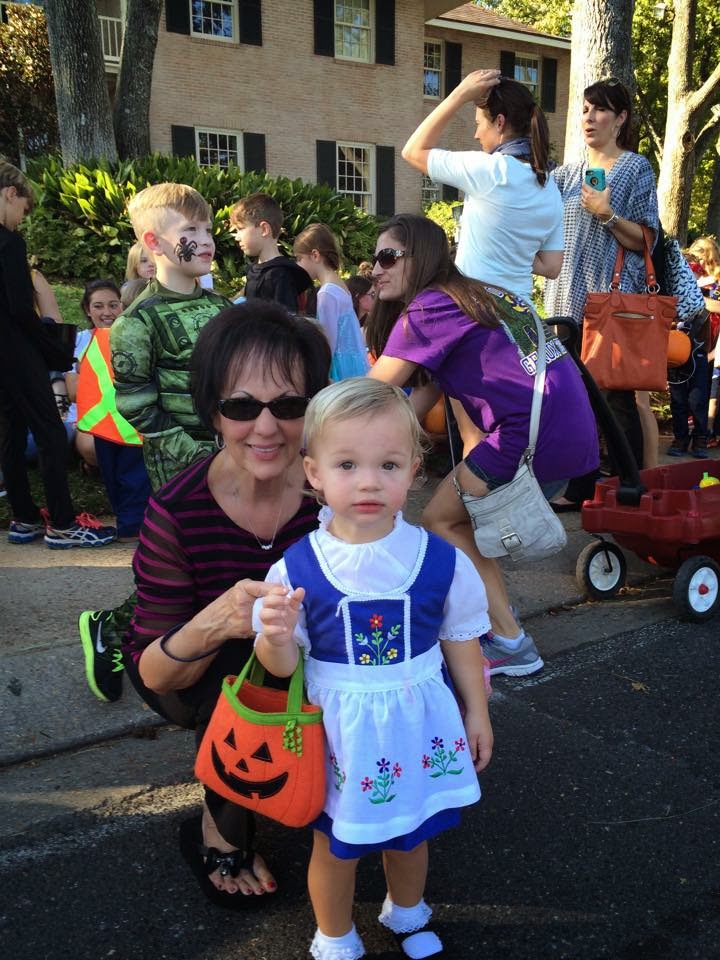 Our day ended back at the Dee Gee where they had cookie decorating for children of alumnus. 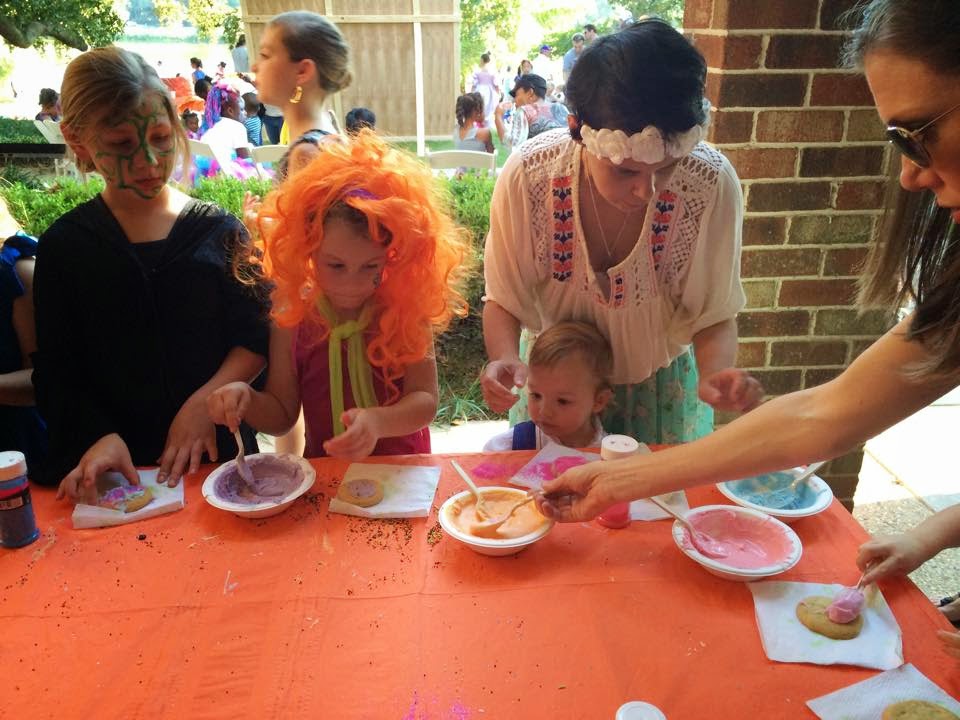 As if she needed any more sugar!
HA! 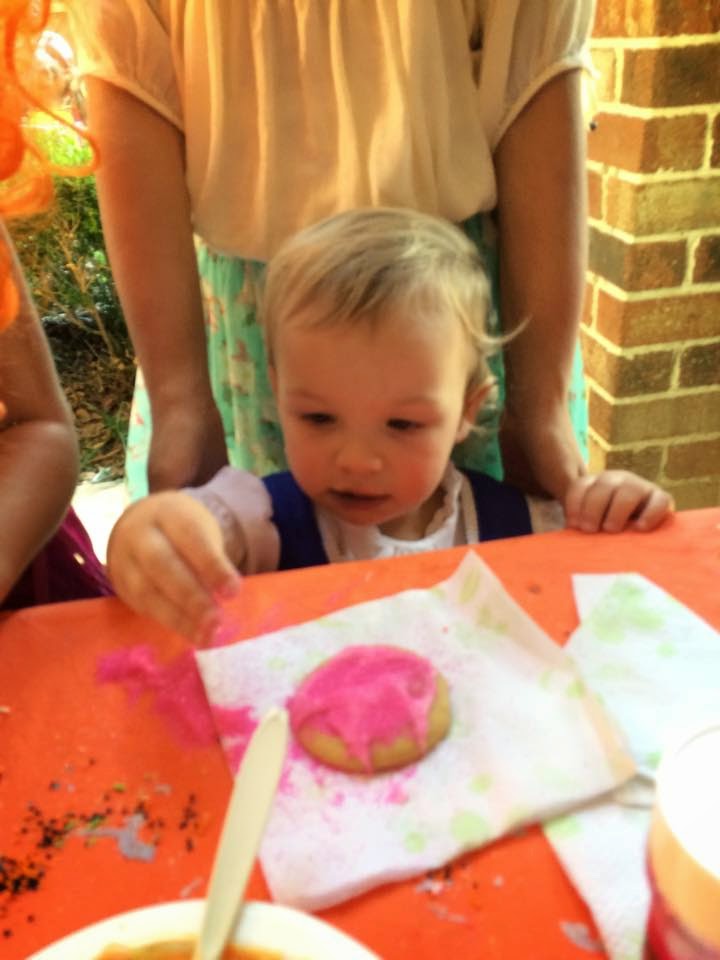 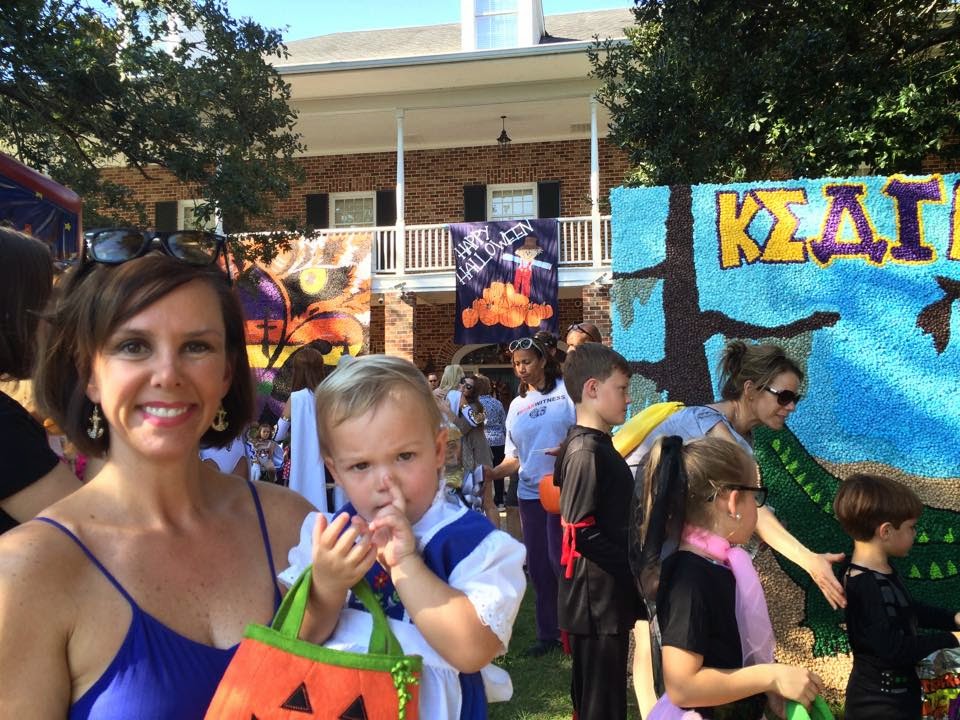 That looked AMAZING! And Shelby's outfit is so cute and so neat that it was yours AND from Germany!

The house looks so good! Yay for DG!