Well, it snowed again here in Charlotte.
The 2nd time in 2-weeks and this time was no joke.
Last time was a mere dusting, this was 7-inches, and in some other parts of Charlotte up to 12 inches.
It all started around 9:30am on Wednesday morning the 12th, which also happened to be Shelby's 14-month birthday.
After her morning nap we ventured outside to see what Miss Shelby would think of all the white stuff.

We saw the mailman still doing his job. 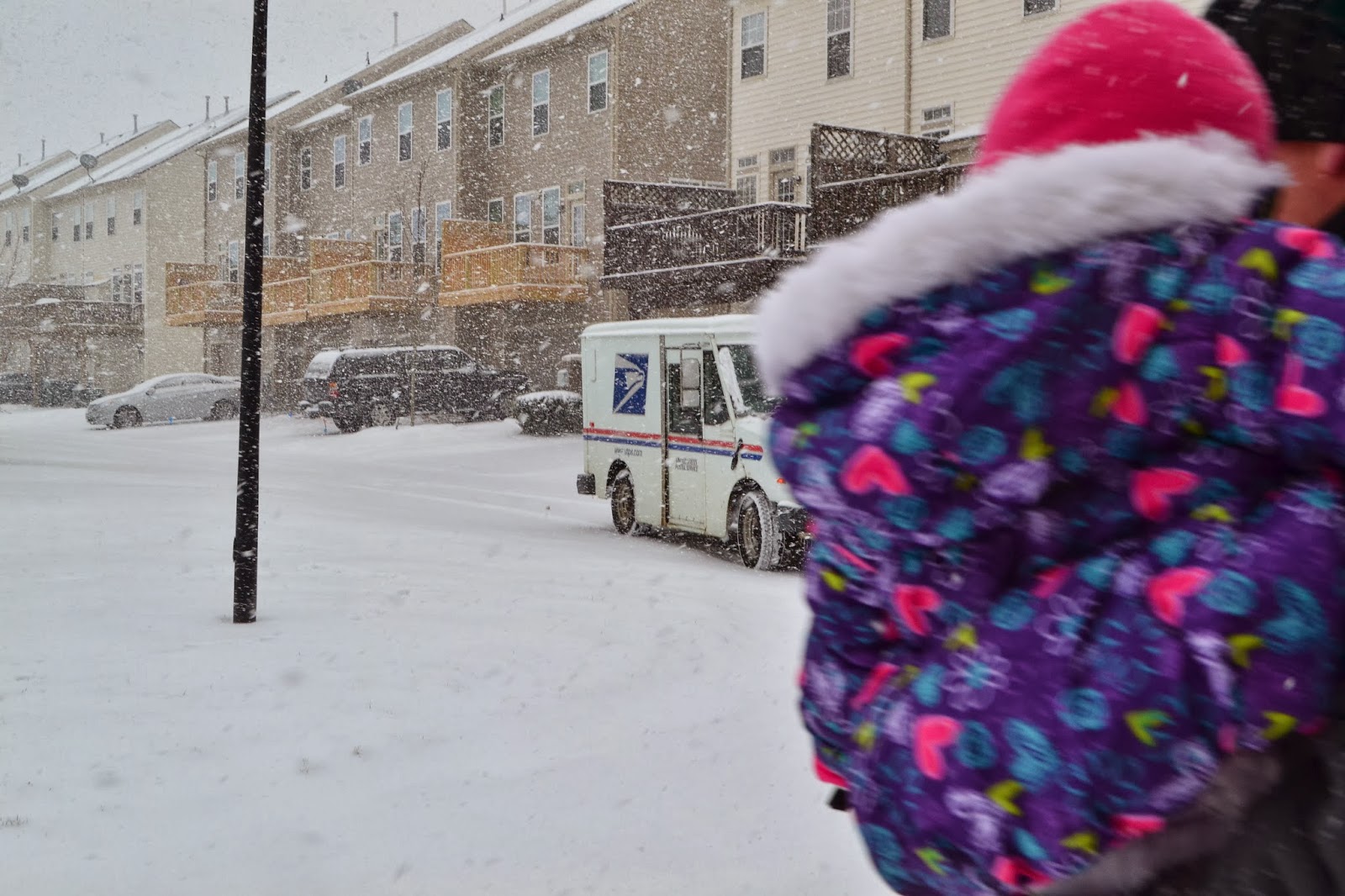 Buddy was more excited about him than the rest of us.
Shelby stayed home from school the day before because she was diagnosed with a double ear infection that morning.
Giving that, we didn't stay out too long with her.
She doesn't have a ton of Winter gear, but I was able to score her some snow boots at a consignment store a few months ago for $6. 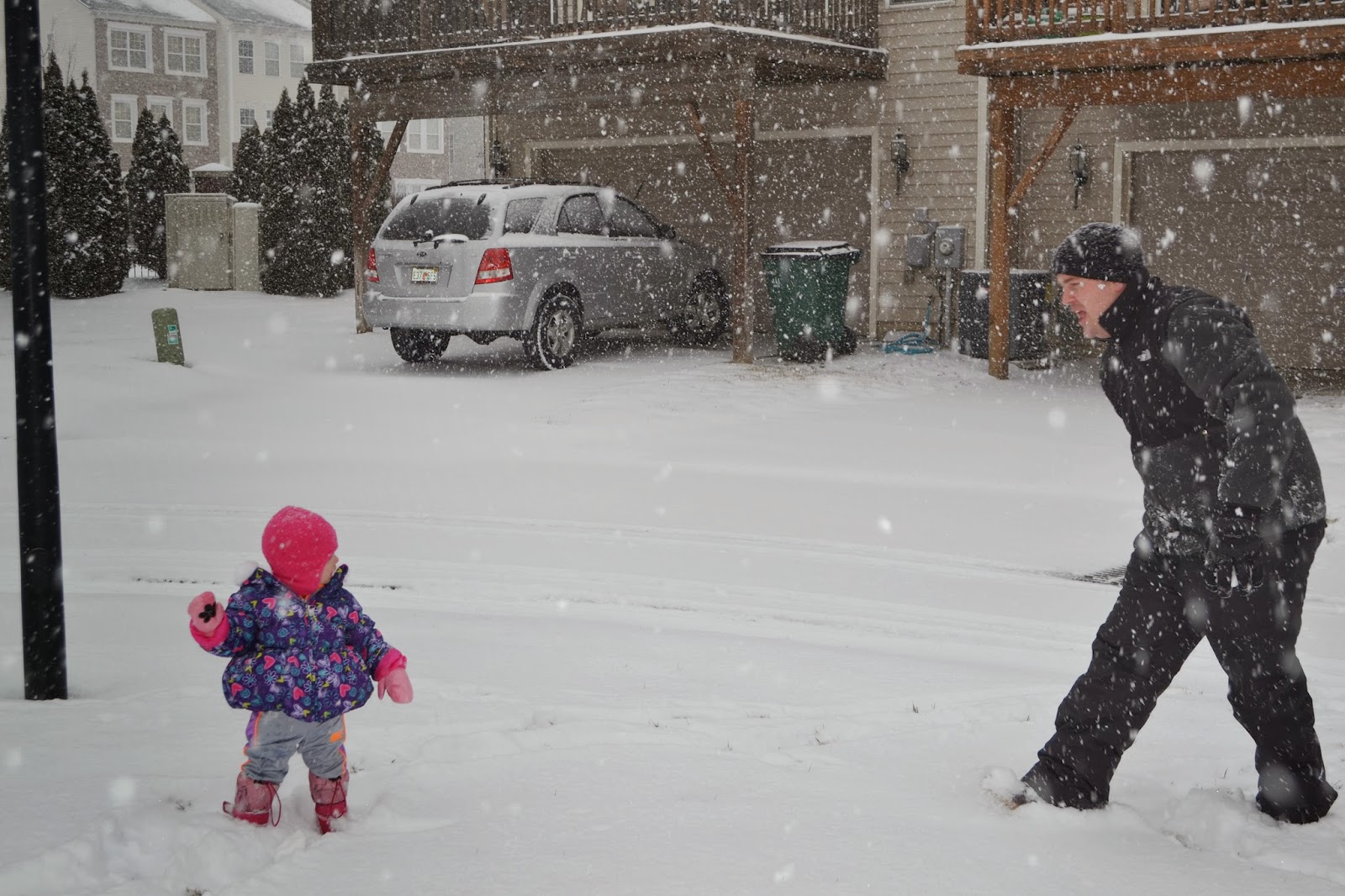 No luck with snow pants, but next year we plan on getting her on skis right after her 2nd birthday, so she will have a pair. 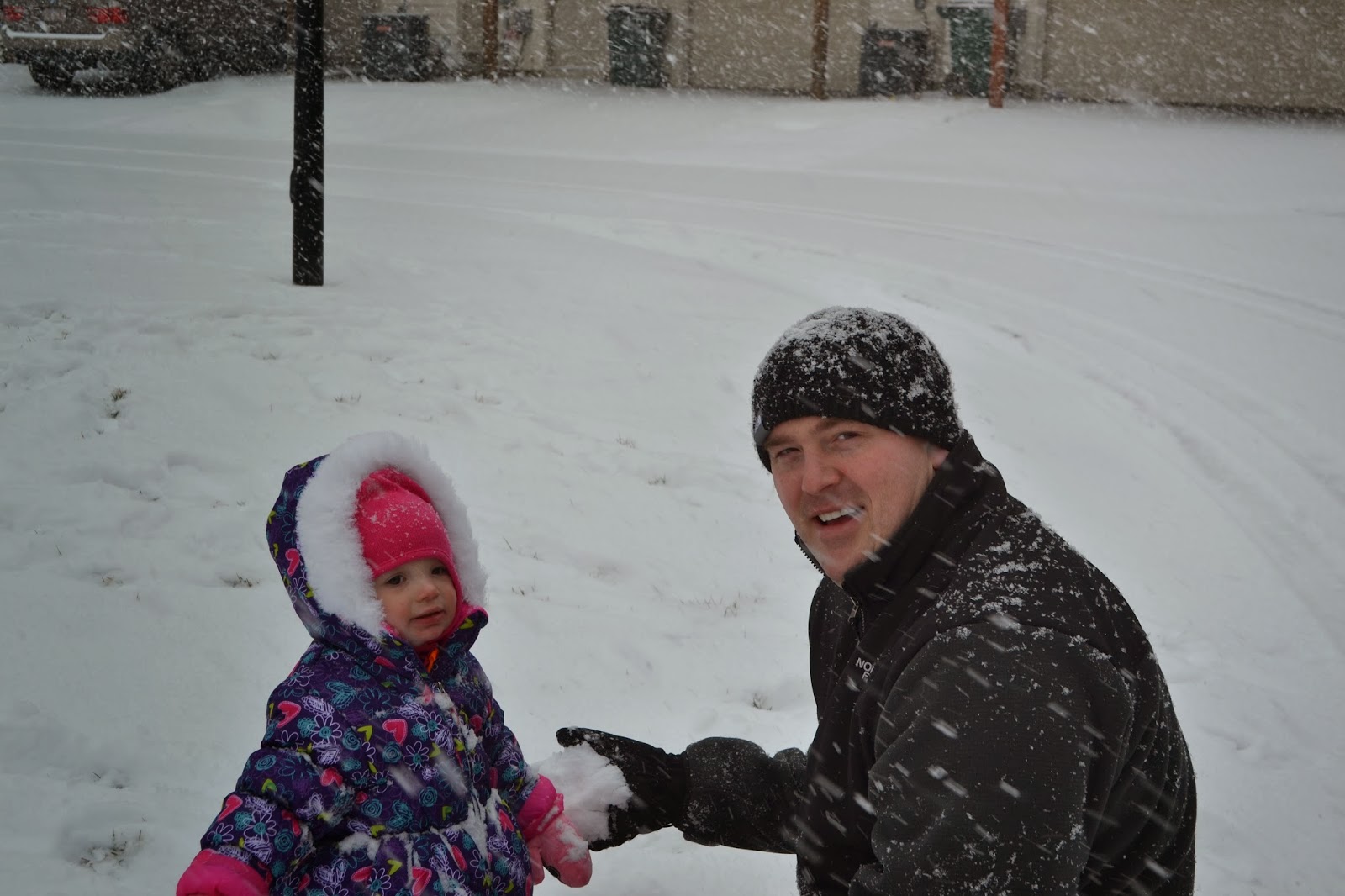 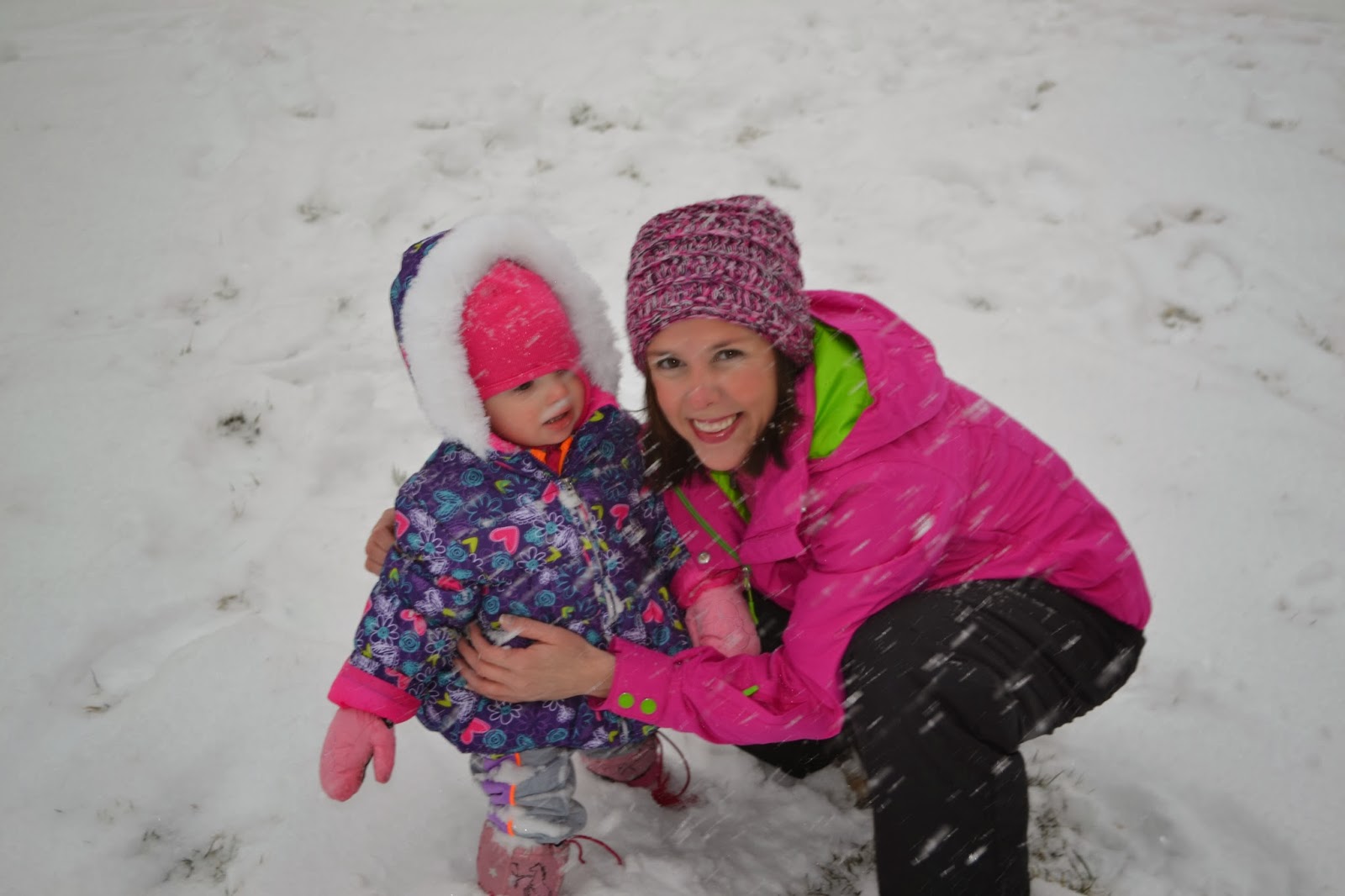 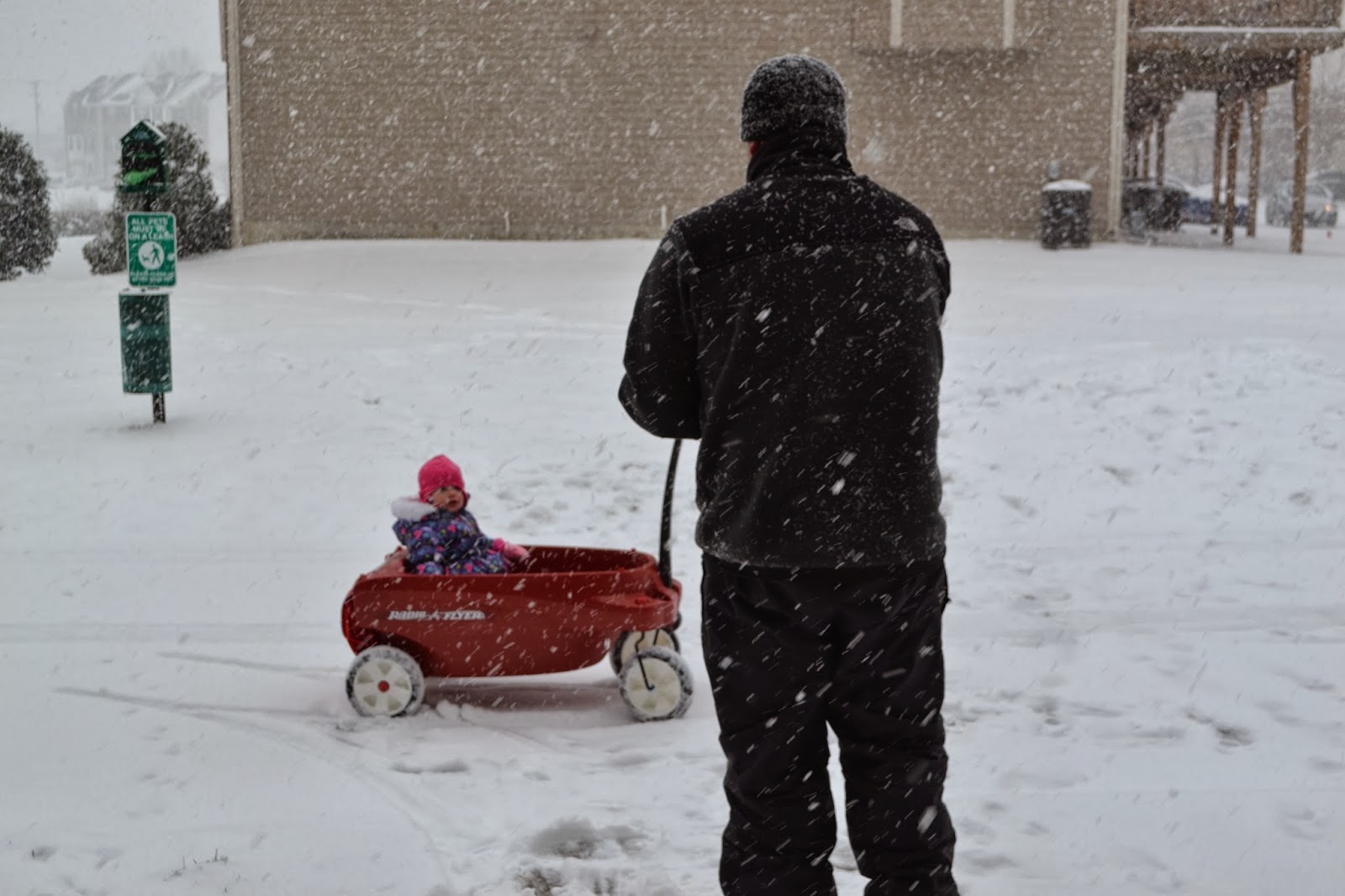 Wednesday's snow was just the beginning.
It poured freezing rain and ice all that night then Thursday came another round. 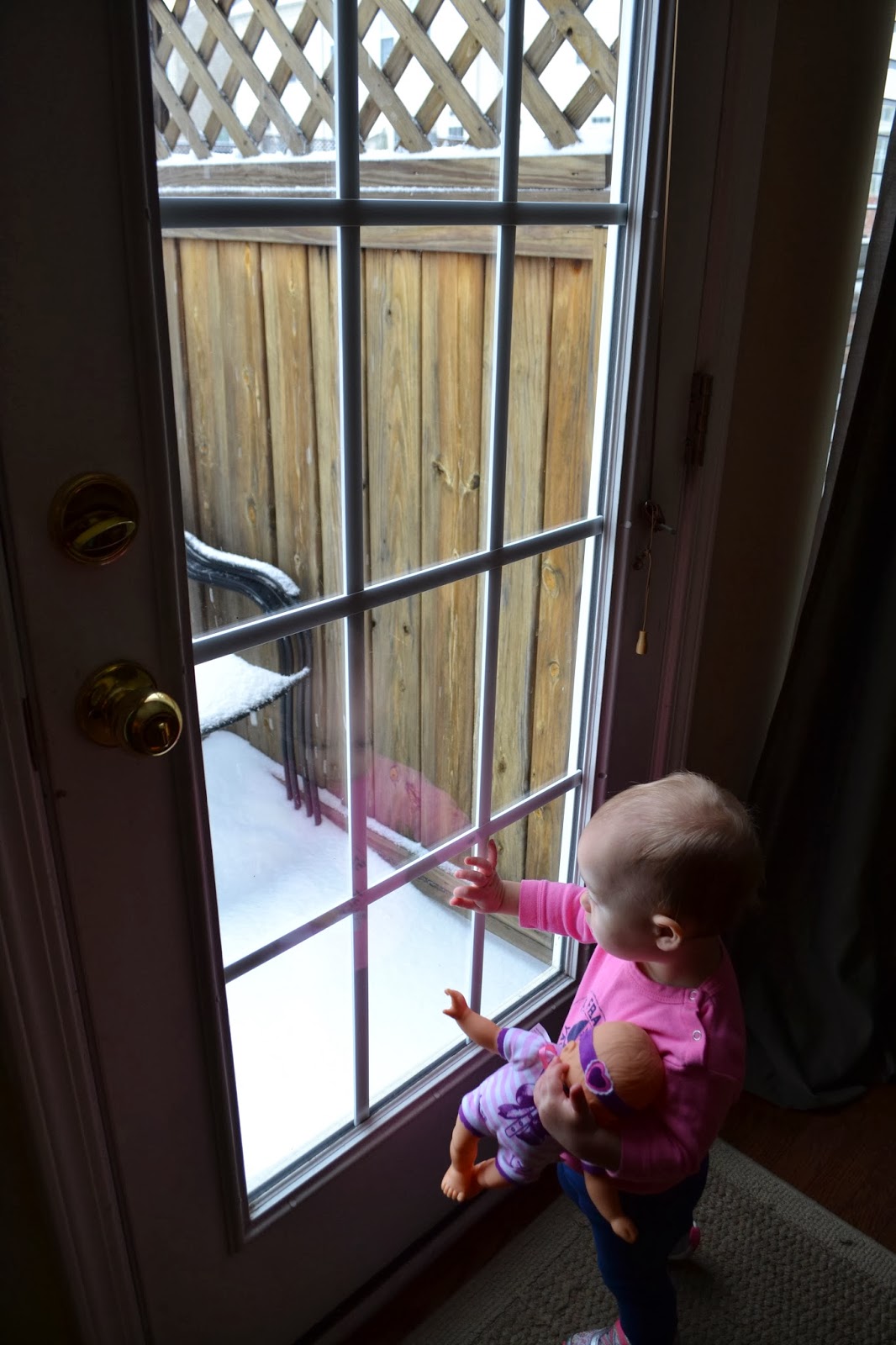 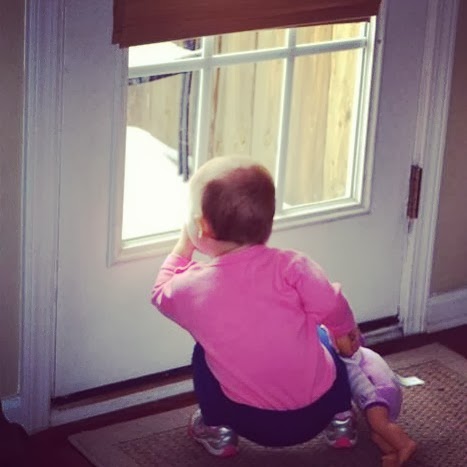 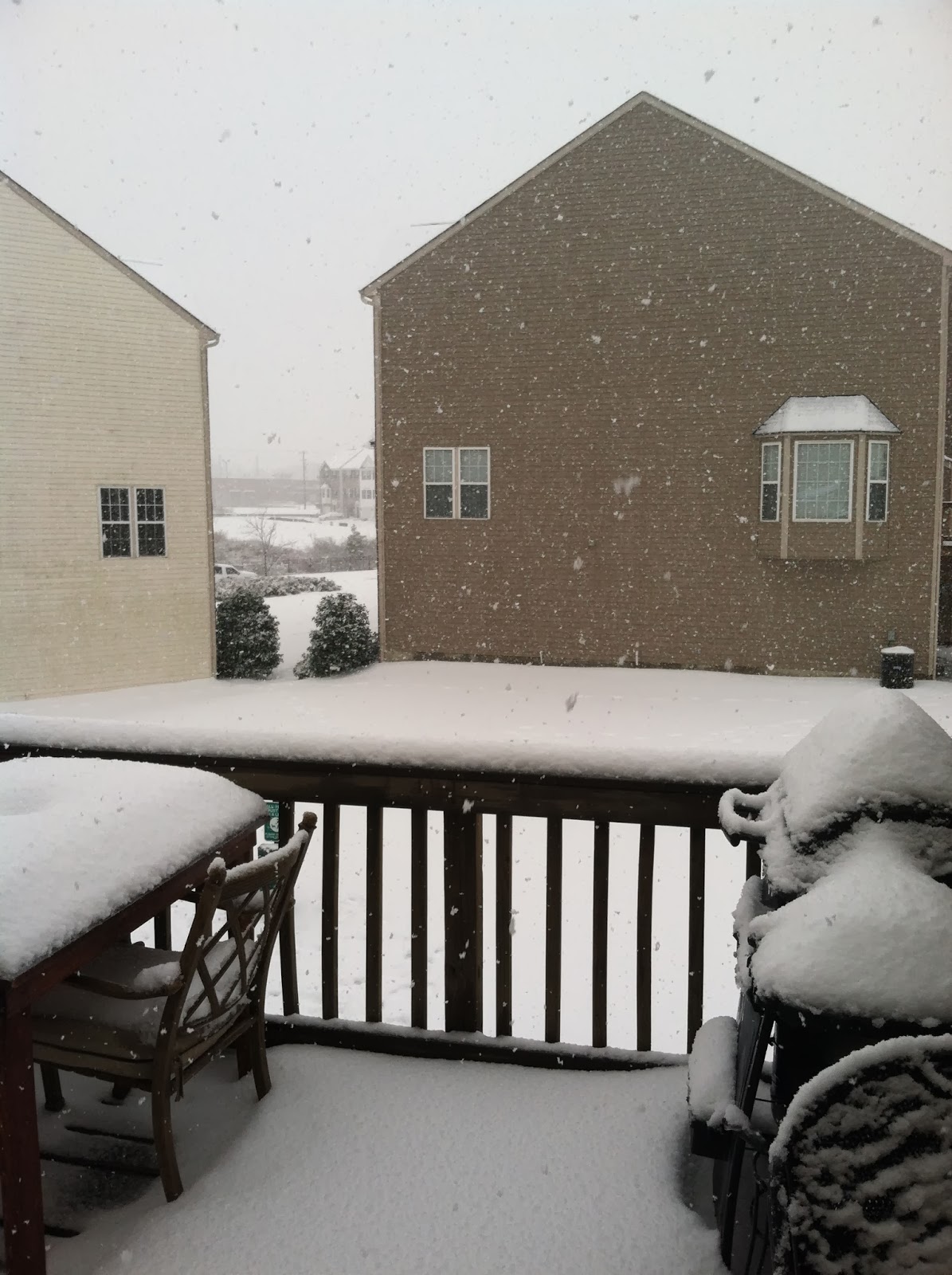 This afternoon, the snow finally stopped and we ventured outside again.
It's a lot of work to bundle up a toddler. 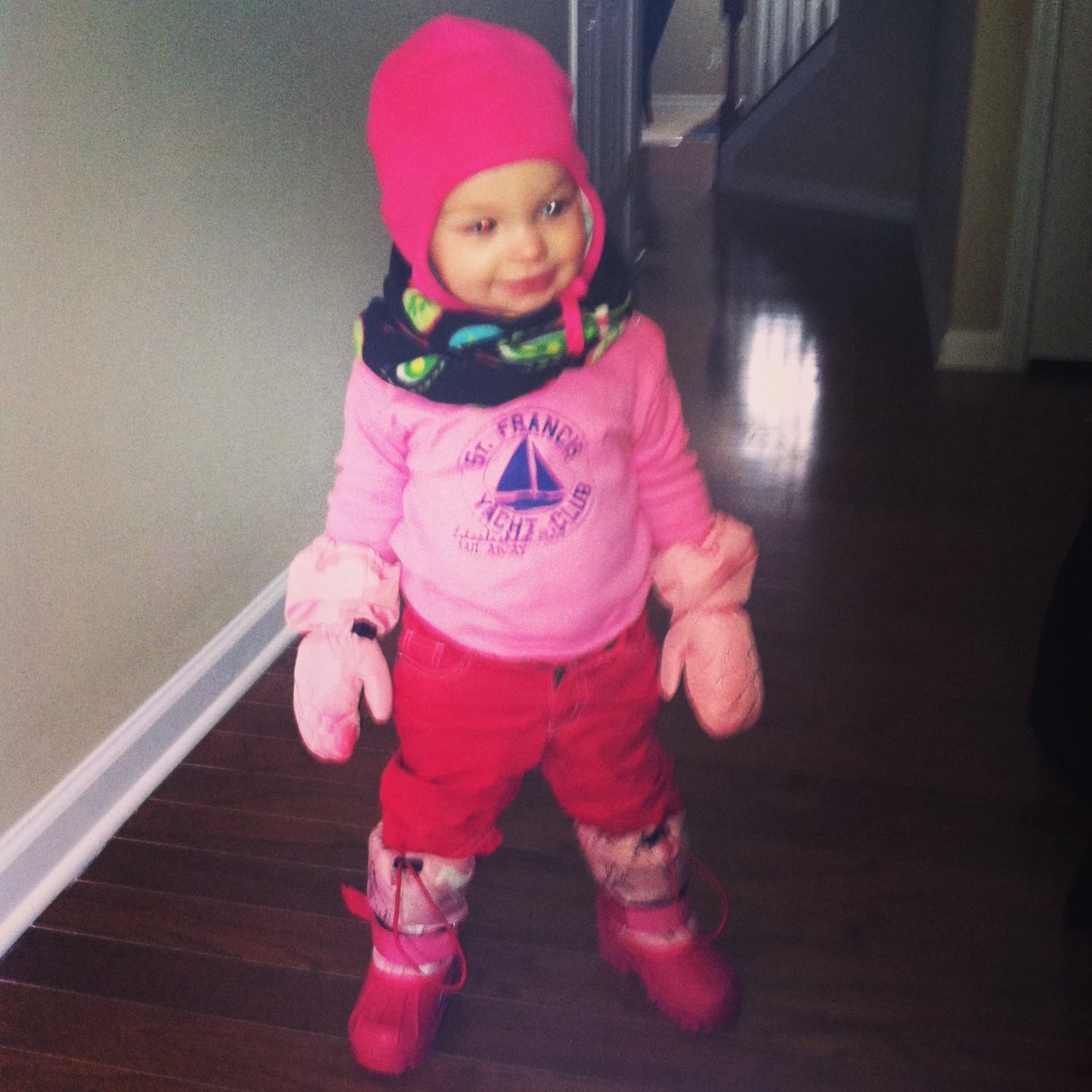 We went to a neighbor's for a play date then on our way back noticed that another neighbor had put together this snowman.
Well, of course, my first thought was.....
LET'S TAKE A PICTURE AND ACT AS IF WE BUILT IT!
And...........
That's what I did!
LOL!!
At least I admit it. I never said anything about building it ourselves on IG or FB, so it's not being dishonest. right?
HAA! 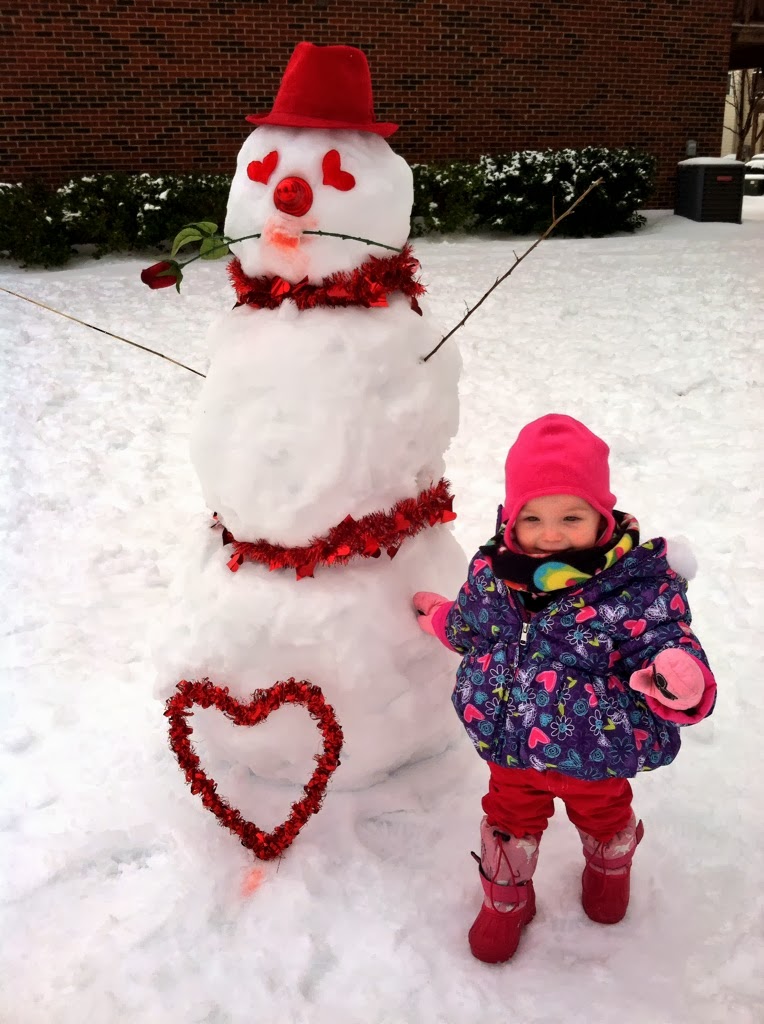 Shelby was much happier in the snow today.
Probably because it wasn't a blizzard like the day before and the sun came out. 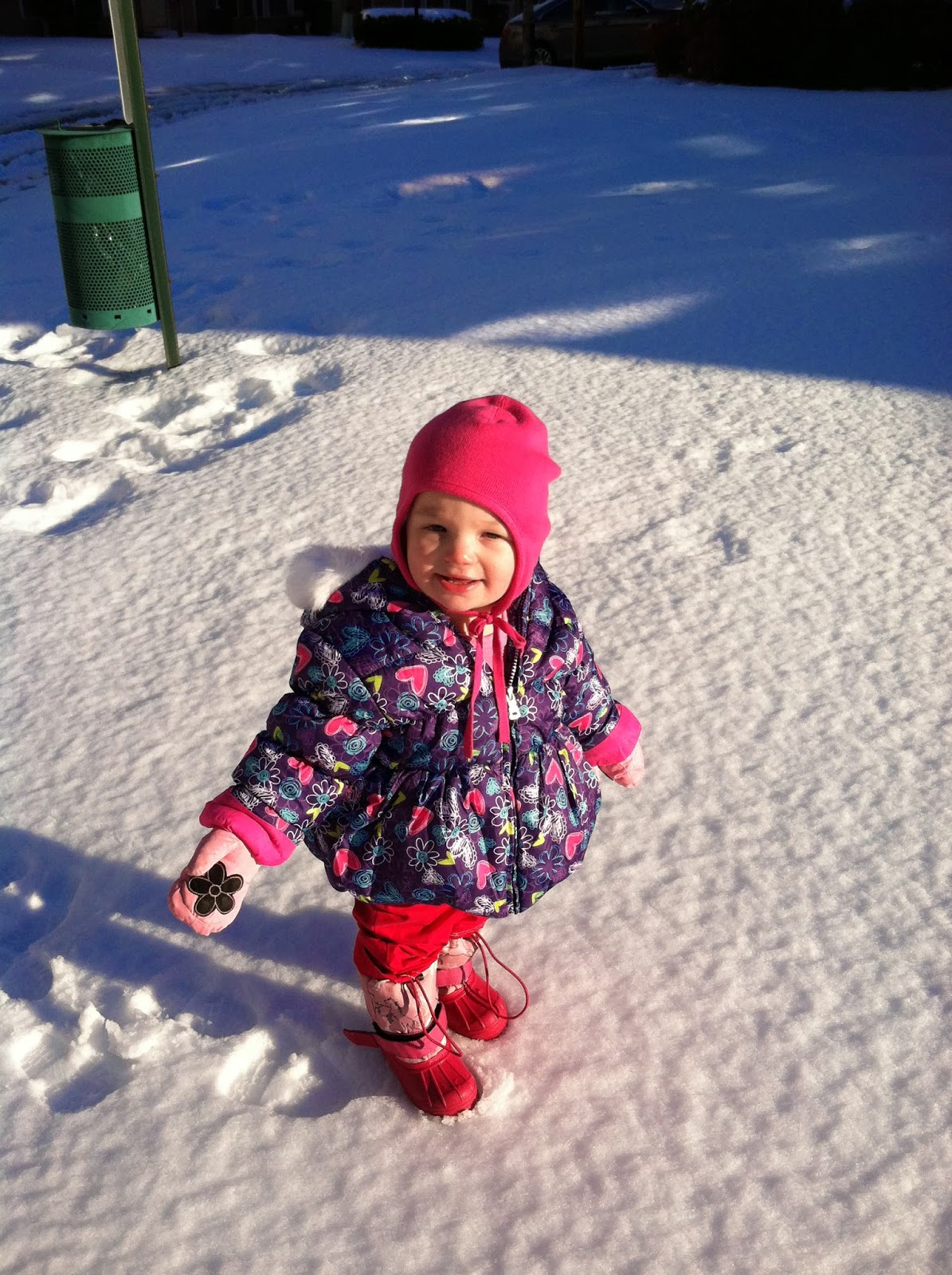 Who knows, maybe we'll venture outside tomorrow and try sledding?
There might be too much melted, but we can try!
No work until Tuesday!!!
woohoo!
Posted by Dee Stephens at Thursday, February 13, 2014

Good find on the boots! Who knew they'd be so useful this year?!

Also, you're so right. Bundling them up to go out in this is no easy task!

If we had that much snow, I don't know what we'd do. I've had a couple inches AT MOST in my entire life at home. My kids would be outside in cotton pants and tennis shoes, ha. Looks so beautiful, and I'm glad y'all had fun! I hope Shelby feels better!!

Crazy weather! Love he all bundled up!!

So awesome! I love that you took a pic with the snowman. :)

haha, well you had me fooled with the snowman.
IM impressed your mail man was still out delivering.

Shelby looks adorable in the snow!!! And boo for the ear infection. I hope she makes a quick recovery. I was just learning about Otitis Media in one of my classes.

I'm so glad she loved the snow. Everyone should be able to play in the snow as a kid!

I've been cursing the snow all week, but seeing how sweet that moment was for Shelby, makes me enjoy the snow a bit more. I love how Buddy went right after the mailman. Ha!

Shelby looks so cute playing in the snow. The valentines day snow man is adorable :) Hope she's feeling better with her ear infection!

Have you found a place that does ski lessons at 2 years? I told Jay that I want to take the twins so bad next year! Love the snowman pics. I HATE building them!