I wrote this post(click here) a couple of years ago before I had Shelby and I still stand by it.
I truly enjoy being a working Mom and I'm proud to say that.
I know, there are many of you stay at home moms, that feel the same way.

As most of you know, I'm a TV/Video Producer and have been in broadcasting my entire career.
What you might not know is that I originally wanted to be in front of the camera!
That's right, having been a pageant girl and with my love of writing, I knew I was destined to be a TV news reporter.

That was, until I did an internship in college at the local ABC affiliate(who I later worked full-time for).
I was assigned to go out with a photojournalist to cover a car accident that we had heard about over the scanner.
All I can say is...
UGH.

It was towards the end of the work day and it was a mom who had left the grocery store with her 3 children.
I sat there and watched them all be cut out of the SUV while the photojournalist shot video of it.
We went back to the station and I couldn't get those images out of my mind.
As the day and days ahead passed by, you would have thought I knew the family.
I dreamed about them, thought about them non-stop, even tried to find out their status at the hospital.

That's when I knew I wasn't cut out to be in front of the camera.
To make a long story short, I decided to become a producer, who basically, tells those reporters to go and cover stories like that and even worse.
But, it's different not having to see it first hand.
You know it's really happened but being back in the newsroom writing about it is very different.

The whole point of this post, is that now that I'm out of news, and in 'bank' TV, I do get the chance to be in front of the camera more than I ever thought.

Including this week, where I got to play the 'customer' role for a training video.
Generally, they hire actors, but I was asked to do it for this video.
Different but fun! 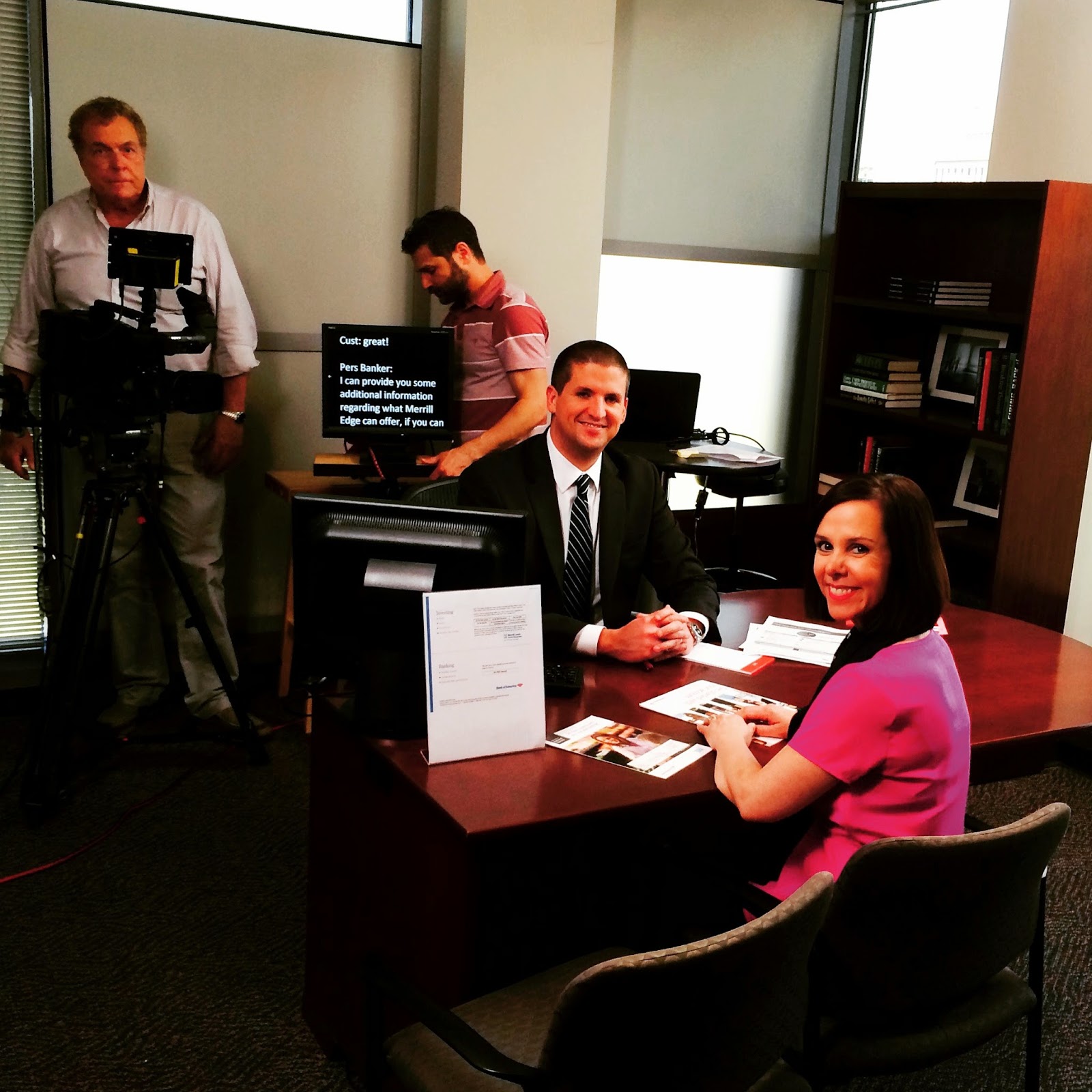 I've actually done this several time and it makes for a long day, but it's fun. 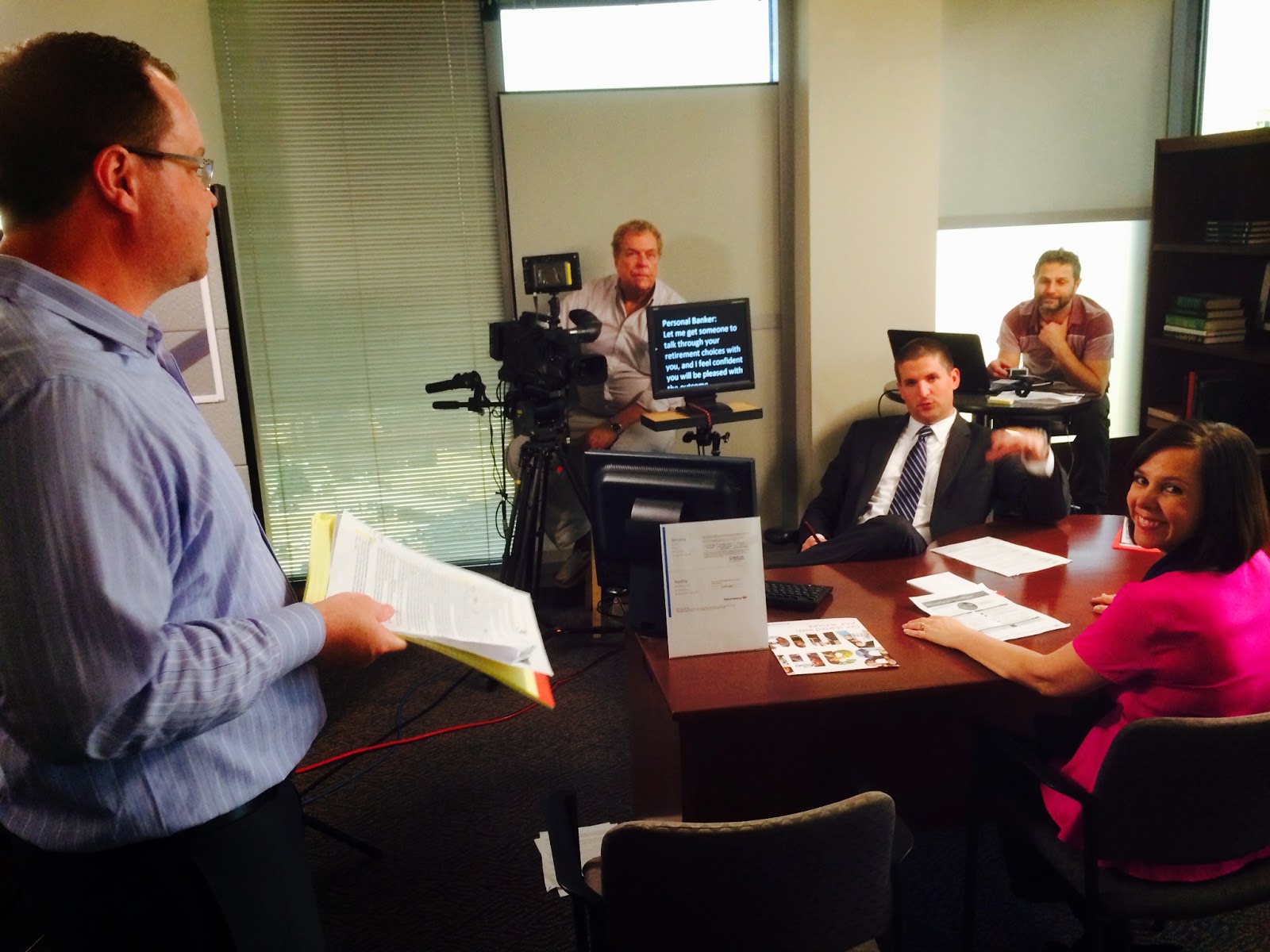 I feel so lucky to have such a great job that is something I truly love to do.
It also makes it even better that I am able to work in a place that is flexible and great for working parents.
I pray daily that I'm setting a good example for Shelby by keeping my career and doing what I love.
How about you?
Thoughts on working outside the home?
Posted by Dee Stephens at Thursday, March 26, 2015

I enjoyed reading both these posts, you write so well. As usual, I have very similar feelings to you. I don't think staying at home would ever be for me, and feel like being an SLP I could work part time or for a school if I had a child.
Oh, and I have totally wondered before why you are not in front of the camera!

I love that you talk about being a working mom. I know it'll be hard to leave baby when the time comes but I feel strongly about going back to work. I think I'll drive everyone, and myself, insane if I'm don't have my own thing to do during the day.

I feel like I have a really good happy medium. I work full-time but can structure my day how I want, so several days a week I leave at 2:30 to get the kids and get extra time with them in the afternoon and just work a couple hours at night to catch up. I think in a perfect world (for me) I would work 25ish hours/week and get some balance of work but a little more time with the kids. I have some SAHM friends who feel the same way too! After being back at work for 5 1/2 years since having kids I honestly don't think I could stay home now, but when Trent was a baby, I had a very hard time going back... Rambling thoughts that might not have made since but I am SO happy that you are happy!

I think it is wonderful that you are able to find the balance between an amazing job and amazing home! I always wanted to be a teacher and miss the days of that job, but with our military lifestyle, we agreed that me being 'home' needed to be a constant for our boys while we moved around with Kev's career. I look forward to going back to work once we are settled for good!