Are You Going Back to Work?? 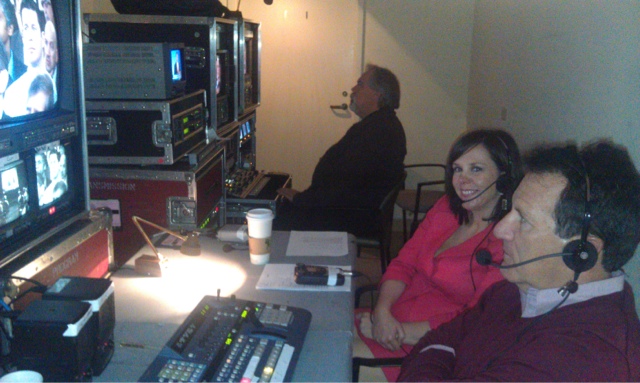 I can't even count how many times I have been asked that question.
The answer?
YES!!!
I was annoyed at first when people would ask because I felt I was automatically being judged for going back instead of 'wanting' to stay home but I'm sort of over what people think.

As most of you know I work in television and have for nearly 20-years.
10 of those years were spent working my butt off as a TV news producer to get to the next position, the next market, the next pay bracket, etc.
I worked weekends for 6-years missing weddings, baby showers, parties, events.
I worked the morning show shift for 1-year which had me reporting into work at 11pm and signing off around 9am.
Talk about a killer for a social life when you're in your early 20's!
I worked the 3rd shift for 3-years going in at 2pm and signing off midnight.

Then, 7 1/2 years ago I went out on my own and freelanced and contracted.
I worked at PBS along with numerous other places along with contracting at the major corporation that I currently work at.
That major corporation hired me full-time nearly 3-years ago and I feel TRULY LUCKY to have such a WONDERFUL job still working in television doing what I love but without the crazy hours, people, poor pay and drama.
I'm giving you all this back story to give you insight on how hard I have worked and what my career means to me.

Right now, I can't imagine giving up such a great job, great people and everything I have worked for.
There are hundreds of people who would kill for my job!!

It would be different if I was doing something I didn't like but TV is in my blood.
PLUS...
I'm not against women staying home with their children I'm just not sure it is for me.
If I still worked in TV news I would be quitting the minute I gave birth but in my current job there isn't the stress, hours or unflexibility that news carries.
So..I'm taking my 12-weeks maternity leave, putting Shelby into daycare come March, putting my heels back on and reporting into work.

Judge me if you want, I don't really care.
This is something Brad and I talked about way long ago before we ever even talked about getting married.
He knew my stance and he's supportive.
Plus, it is giong to allow us extra money to be able to provide for Shelby and help me keep my sanity.

You know I will judge you! Haha!

I think it is everyone's individual choice! I used to think I wanted to stay home, but the more I think about it the more I think that I would need to have some other outlet. Especially if it is my current job that I love! Only time will tell...

Not caring what people think is really important when you're about to have a baby because EVERYONE has an opinion about EVERYTHING. Good for you for doing what you want!

As long as you use cloth diapers, I think everything will work out just fine ;)

Sounds great! I'll be going to back to work too! Where is Shelby going to school? We are on a few waiting lists a different places, but it is so hard for me to NOT know where she is going.

Also, I just said "SHE"...I think that was a Freudian slip, because we have no idea if our baby is a boy or a girl - ha!

You worked hard to get where you are and I don't blame you one bit! We must remember just because we are becoming new moms we are still individuals as well. Good for you and I am jealous of your job sounds awesome!!

I'm with you! I'll be heading back to work after taking 12 weeks off. I'm also going to start looking for a new job almost as soon as BGP gets here so I (hopefully) won't have to travel.

Go you!! You have worked SO hard to get where you are and love what you do. Just because you are not staying home does not mean you will love Shelby any less. Honestly, I cannot believe people even think that way. I had a SAHM and still think it is ridiculous. We are each entitled to our own opinions, but we must also respect others!!

I'm laughing right now because I'm a stay-at-home mom, and I will tell you right now that if I had been in a job I enjoyed I wouldn't have left. It's hard staying home, and having the income is nice. No one should judge you.

Staying home when the kids get preschool age is tough. Babies, not so bad, but when they need a lot of interaction and activity, it's tough.

I would not change anything I've done though.

Your job sounds so exciting!! Sounds like you really have worked your butt off, and deserve this amazing career and where you stand. I love that you aren't giving that up. You can have the best of both worlds. :)

It's so funny, just a few hours north and we are judged for staying home - not going back to work-ha!

I left a career that I spent years to get where I was as well. Although I'm not climbing any ladders right now (except the one to get my fall decorations out of storage), I do plan to work again when my kiddos are in school.

Being a mom, you have to learn REAL fast to do what is right for your family, and good for you that you already have some parts of it figured out!

Hope you can get a day care close to the office so you can go squeeze your love bug during lunch!

Brava to you, my friend! Each person should do what works best for them as an individual and as half of the couple they are a part of. I commend you for your choice since it is what you are passionate about!

I've done both and have now been home for 7 years. And, I'm going back to work! More on that later.

Good for you! Shelby has a great role model already. I worked the first three plus years and just started staying home in June. I'll be home for at least next six months or so with new baby and I really do see benefits to both. For me, I think part time would be ideal but who knows.

AMEN SISTER! I went back to work when Lyla was 10 weeks old. I thought it would be really hard, but it's actually a nice break. I found a WONDERFUL person to care for her during the day, so that helps a lot. You worked hard to get where you are and that can only be an inspiration for Shelby!

Having worked in broadcasting the little bit I did (only about 3 years) I can see how much work you have put in to get where you are--- how amazing. I think it's cool you are going back to work, I definitely want to! We are moving, so that's why I can't go back to my former job, but once we get settled in to our new place I think I'll look for a new job!

I actually think day care socializes babies/toddlers well and gets them used to interacting with other children and adults. Shelby will do great. :)

I totally agree with Leigh and what you said about TV News. I had to leave my job, as you know, because there was no way I could be a TV reporter, always on-call, with management that didn't care about family, etc. I never would have seen Blake! You are lucky you have a more "normal" job now that allows you to do both. Deciding to stay home was so hard on me, still is. We are all trying to find balance and you will, too.

I wish I could have stayed home for the first year, but with me working we have been able to save for A...as well as have money to do fun stuff with her. Id rather work hard now and be able to take the time off when she is older and wants me at her games or events :) My mom worked until i was in HS and then part time when I was in HS and She NEVER missed a game or race. Those are the times I remember, not when I was a baby.

Good for you! I get so tired of the same thing, and I don't even have kids yet! I think if I do have kids, working will show them how to have a good sense of self worth and how rewarding a good, accomplished career that you worked so hard for can be.

Good for you! I NEVER NEVER NEVER wanted to be a SAHM. I loved my job and would have stayed there forever had my husband not had an opportunity of a lifetime that required a move. It was a huge adjustment to stay at home. I have learned to make it work but I miss my working days a lot too.

I agree that its important to do what you think is best and not care what everyone else thinks!!