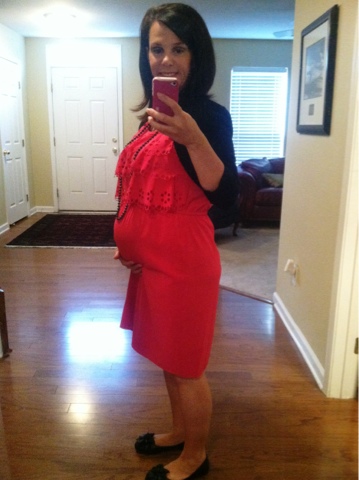 I'm 25 weeks and 1 day pregnant! Leaving 14 weeks and 6 days to go!
I thought I was in my 3rd trimester when I hit 24-weeks but I've learned that it actually happens at week 29. Still a ways to go but I'm thinking it will go by fast.
I'm still dealing with some of my back and rib pain, but it has been helped by taking a Prilosec a day along with sleeping elevated.
It hasn't totally gone away but that does help.
Other than that I've been feeling good!
When I went into the doctor last week he said my weight was right on target only having gained 10-pounds.
I think it's more like 13, giving I didn't step on their scales until week 10.
He says I'll gain another 10 or 15 these last few months.
It will be interesting to see just how big I get!

I feel like we're on track with getting things ready for the big day including taking a lot of the maternity classes that the hospital offers.
Last month we did the hospital tour and the safety class.
This month we're really knocking things out.
We took the breastfeeding class last week and last night we started our 2-part childbirth class.
Yes, I know, most of you are thinking we're doing a lot of this too early.
Maybe so...
But...
We found another couple to take the classes with, AND Fall is always crazy for us between events, college and NFL football.
Not to mention, it's the television producer in me to have everything done early and wait for the big show.

So, my take on these classes?
Well, there is some good information but I'm not sure we're going to take every last one offered.
A lot of what we do is watch videos.
Couldn't we be doing that at home? 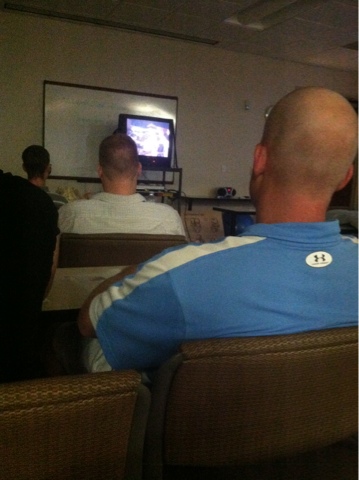 Brad has been SUPER supportive about participating which makes me feel more wonderful than he probably knows.
He even went to the breastfeeding class which had us both cracking up at first.
I know it's serious, but they opened the class with a video of women feeding their babies and it's all that we both could do not to laugh.
We both agreed afterwards that it was a big awkward!
LOL!
Last night's class was REALLY long!
3 and 1/2 hours for part one of our childbirth series and the next class is just as long.
We watched several videos, along with learning how to count contractions and breathe.
There was one exercise where we did role reversal!
The men got to be the pregnant women.
Brad, thought it was hysterical!!! 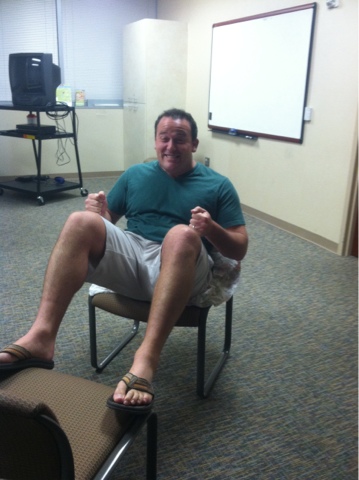 I felt bad at this point in the class because out of the 10 couples in attendance there was one woman whose husband never showed up.
She had dinner waiting for him and everything.
I hope he had a good excuse because she wasn't happy.
Overall, we are learning some good things and I think we'll take labor support just in case for some reason I can't get an epidural!
Next time I'll try and take more pictures for your amusement!!
Until next time!
(don't judge me for wanting to take drugs during delivery!!)
Posted by Dee Stephens at Thursday, August 23, 2012

I like how you said, "in case I can't get an epidural"....that's what I'm saying too! Hopefully I won't have to use most of what i learned in our class and I can just get the drugs!

I think its great getting the classes out of the way. I started around 28wks. Most were due before me. You never know she literally could come anytime. Love the last pic too funny! I plan on getting an epi also!!

it's awesome that you two are laughing through these classes together.... laughing is always a good thing, even when it's inappropriate, ahha.

You are doing so well on your weight. I was a piggie. So sad about the woman...at class.

Epidurals are great!! No judging here! Love that picture of Brad in the role reversal. Dennis and I laughed during a couple parts of our class.

You guys are so prepared. I don't think I have the patience to sit through a birthing class. Plus it might give me nightmares. You look fabulous!

Epidurals are fantastic. I'd like one right now and I'm not pregnant.

Does your hospital offer daddy boot camp? It was my husband's favorite, hands down.

Drugs are the only way to go during childbirth!!

No judgement on the epidural... the main focus is for a happy momma and baby!

Girlie, you are looking awesome! Adorable dress, and those classes always make me wonder if I could keep a straight face the entire time. I feel like I would be kicked out for laughing and having my 5th grade sense of humor come out. Happy Friday!! :)

Yall crack me up! Brad is out of control! You look fabulous as always...that's awesome you've only gained 10 pounds...your walking is paying off big time!

omg, that pic of Brad! Priceless!!

I'm cracking up about all the classes. Brad is a trooper. I don't think Trey would've sat through any of those classes. No matter what they tell you....your birth story will be all your own! :)
You look adorable! Oh....and get ready for the lactation nurses. They can be VERY pushy. All modesty goes out the window during childbirth and breastfeeding!

Isn't it amazing how much has to be accomplished before a baby arrives? We're in the midst of classes and such as well...

You look fantastic - love that dress!

Get the drugs. It rocked.
You are adorable!!! We did the classes late, and were definitely getting stares like, she is going to pop! It was funny!! I can't wait to see your nursery!

Congrats on only gaining 10 pounds- I think that's pretty amazing. I gained a total of 48 when pregnant with Grace - oy! (However, I lost about 58 afterwards - breastfeeding!)
Brad cracks me up, too. Miss you guys.

Epidural = heaven. I have had great birth experiences and I attribute it to the EPIDURAL!

Also, I took my hospital classes when I think I was about 24-26 weeks pregnant. I was worried that it was a little early but the women who were 35 week+ pregnant were extremely uncomfortable during the class. I was comfortable and retained everything too, so it worked out fine!

hahah. Oh man, some of those classes do seem awkward and we took them all too...and most pretty early on :) I watched a lot of videos at home online.

I had similar pains that you're having and took the prilosec, too. Life saver! My husband was the only guy at our breast feeding class and wanted to kill me afterwards! I think all the classes are the same with the videos- our fav was how everyone had 'tramp stamps' in the videos. Get The drugs, I wish I had gotten mine sooner. It's going to fly by! Ps- your week of showers was awesome, don't think I was able to comment on them.