Football is in the air!!!!!!!!
I absolutely LOVE college football and am counting down the days until kickoff!
A lot of that has to do with being raised here in the South, and of course, going to college at LSU.

Despite North Carolina being ACC Country, Charlotte has a huge SEC presence.
Every year there is an SEC Kickoff party before football season begins and people always show up in droves.
This year was no different.
It was held last night at IceHouse restaurant and bar in the South End.
We went straight after we left work so people were just starting to show up.
They made it a tailgate atmosphere with each school setting up a tent. 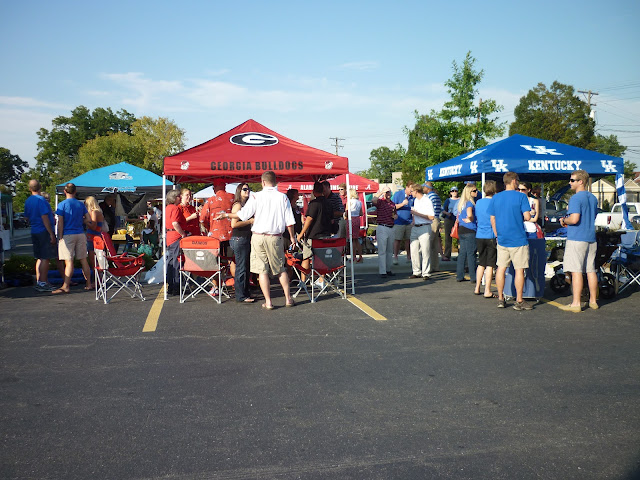 Some schools didn't actually have tents to represent their university so they improvised using plain ones and putting signs up on the front. 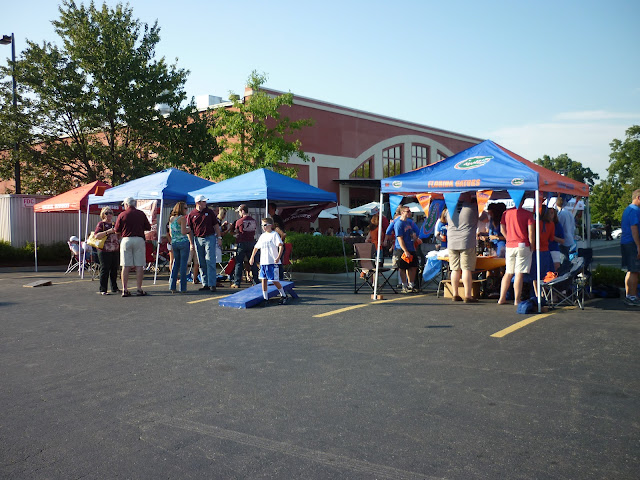 Of course, LSU didn't have that problem!!! 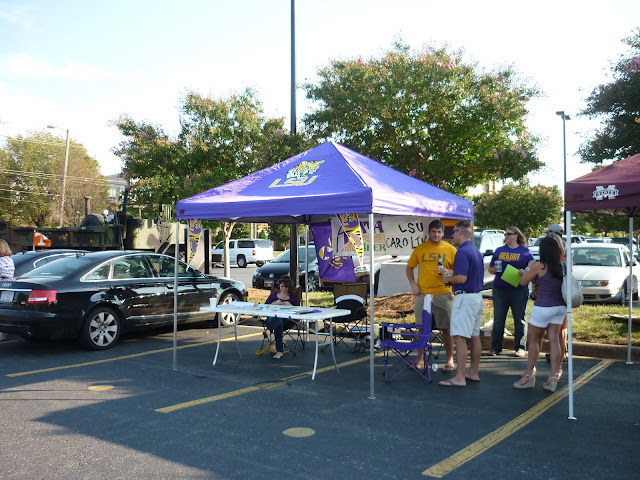 The weather could not have been more perfect.
Fall AND football are in the air!!!
This is my VERY..VERY FAVORITE time of the year.
I get giddy about it!
These pictures were taken around 5pm to 6:45pm. 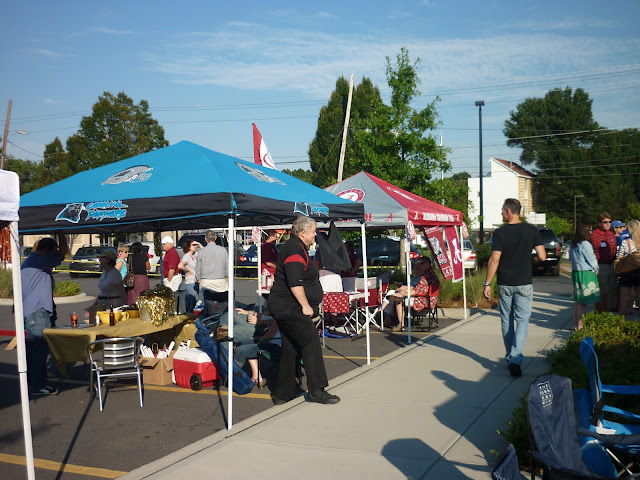 And.. this is 6:45pm and on...
The place really got packed.
They had live music, free food, beer specials and more. 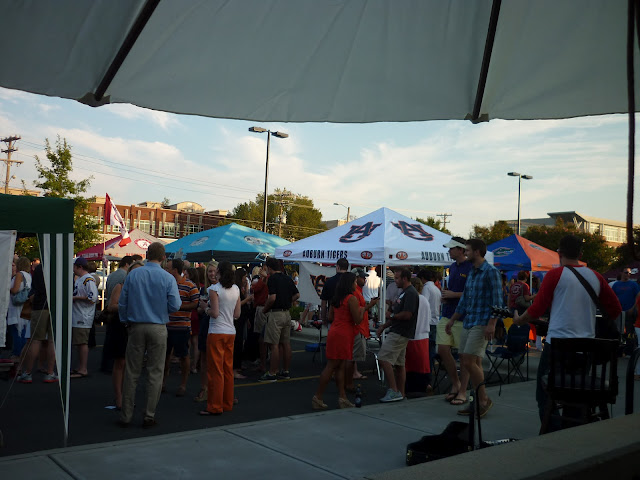 I don't care what anyone says, the SEC is by far the best athletic conference around.
So great to see all the fans come together as one. 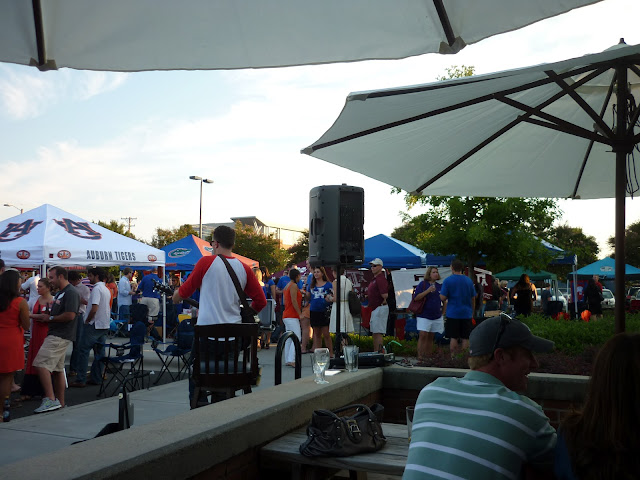 We met up with a bunch of friends at the event and because I can't drink a real beer this year I settled on an O'Douls.
The first one I've tried and I have to say, it tastes like a real beer!
I might have to look into non-alcoholic wine! 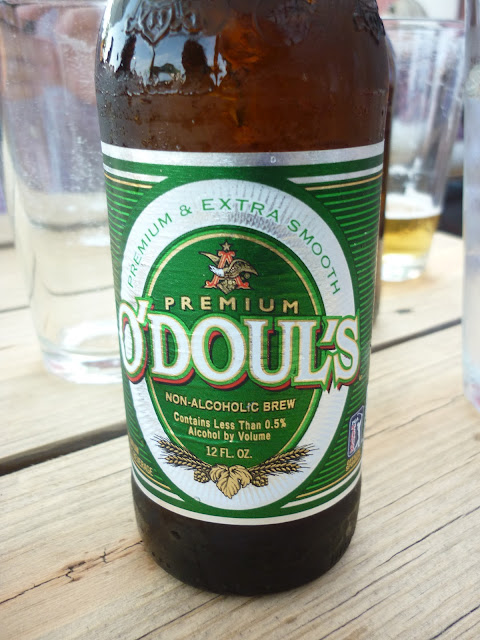 Our Arkansas fan friends Katie and Josh were out and about for the fun. 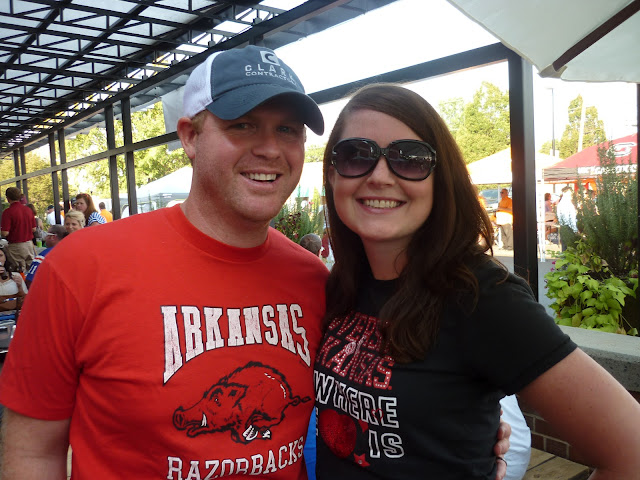 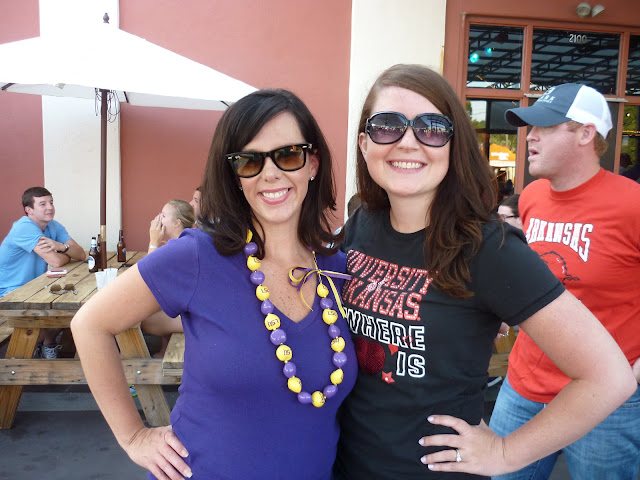 And, Dan and Angela from the LSU Alumni group. 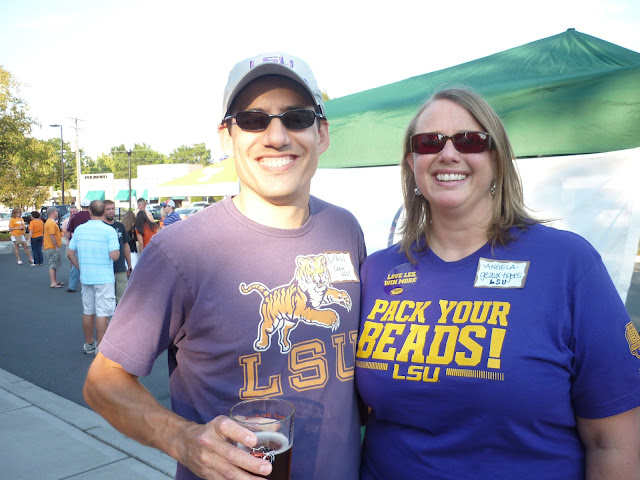 I shopped and shopped for a maternity LSU shirt online with no luck.
I ran to Target at the last minute and settled on a plain purple shirt and paired it with my LSU beads to look festive. 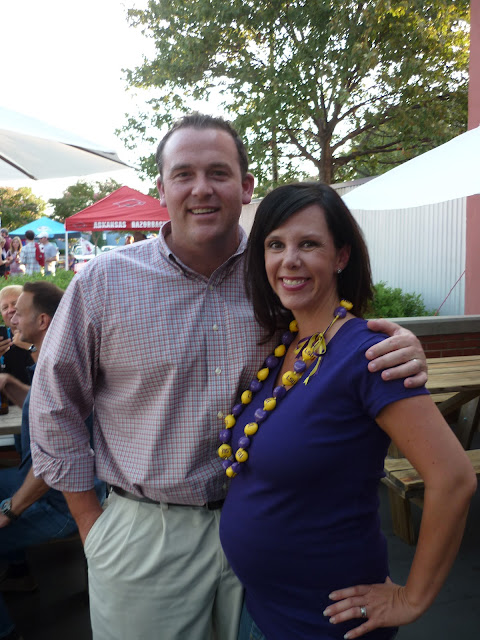 Even the dogs were looking dapper in their school colors! 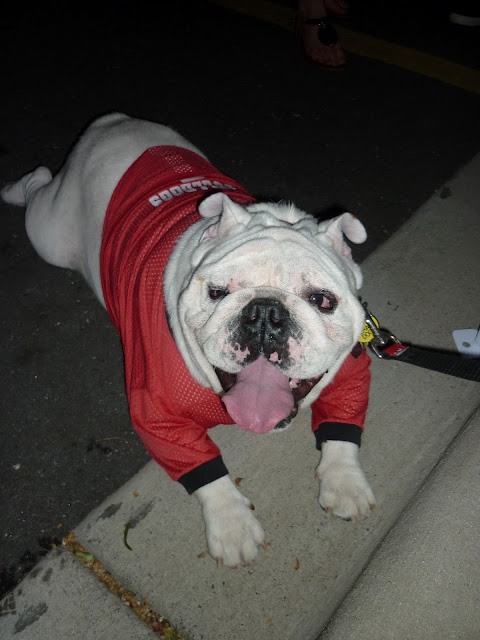 It was such a great event.
Better than years before.
There was even a cornhole tournament between the schools. 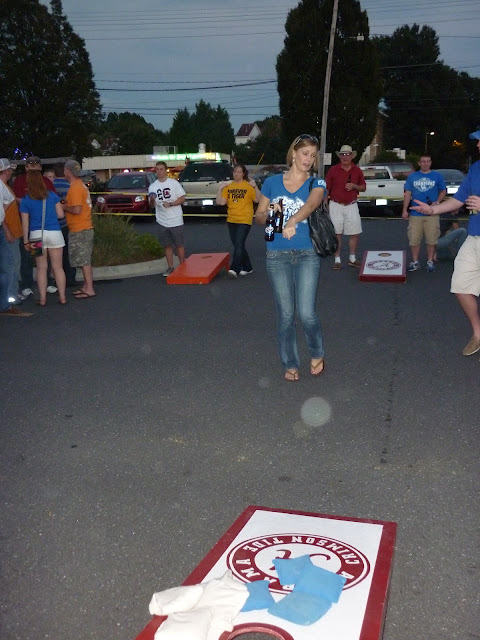 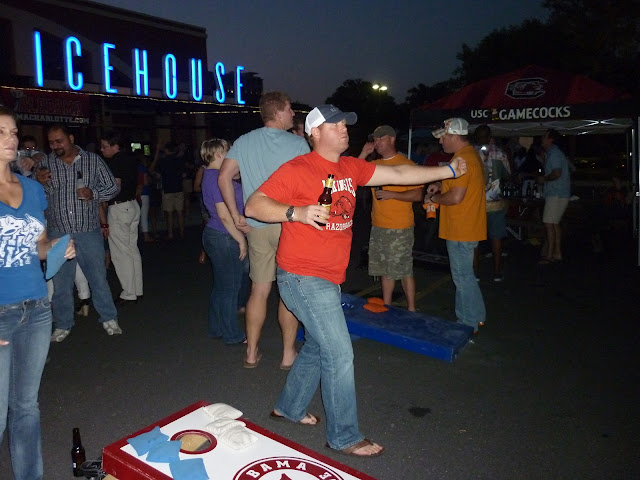 Not to mention, I saw TONS and TONS of people I haven't seen in quite some time. 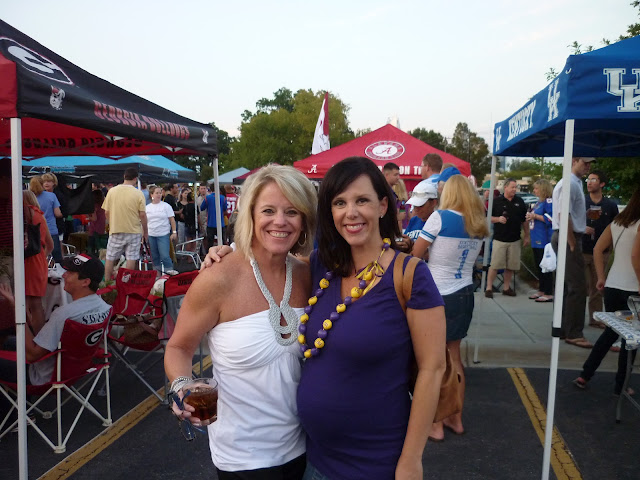 And, even blog friends like Rachel from In No Simple Language! 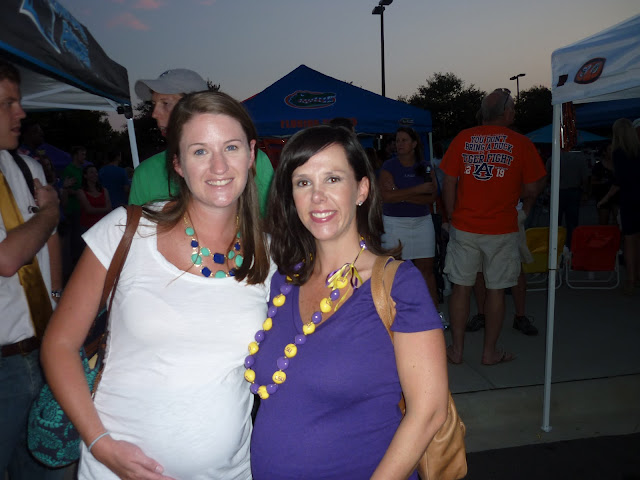 Are you a football fan?
SEC? ACC?
Are you excited about kickoff??
Posted by Dee Stephens at Saturday, August 25, 2012

Looks like such fun! Hope I can make it next year! Go Gamecocks! GO SEC!!

Even though I am a die hard Hokie, I def have SEC envy!!

I'm not a big football fan, but I'm sure my husband is pumped!

I'm not a big fan of football, but this looks like it was pretty fun! :)

I love this time of year!!! Erica
ericasrunningjourney.blogspot.com

What a fabulous event!! I think I would have to agree with you even though I am an ACC graduate. SEC is just big in football. I think the only school that would be even close to tailgating like an SEC team would be Clemson. I think they may win the ACC prize.

ACC is more of a basketball league. Love the shot of an Uga dog. :)

It's great you found the purple shirt because it can be so hard to find things when pregnant.

Makes me sad our local alumni group disbanned this year. No football watch parties for us:(

This honestly looks like so much fun. My hubby would have loved to have joined in on the celebrate at the LSU tent. You looked adorable. :)

This looks like so much fun! Let me know when it's happening next year. We have got to go to this since we live so close!

OMG How fun! I wish I had been in Charlotte to celebrate the start of the SEC season too. I'm so excited that football season is here!

Woo hoo! Laine is getting an LSU cheerleader uniform this year. First one! Can't wait to show it off.

Now that is a serious pep rally for football! CANNOT WAIT for this weekend's games!!! eeeeee!

oh, wow- so fun! I didnt go to a big football school, but my close friend went to Michigan so I think I have an understanding of it :)

your bump and pup are looking very good!

LOVE football season and LOVE the SEC. I couldn't find a good Tennessee maternity shirt although I didnt look too hard. But I have been loading up on orange beads and i have white maternity shirts and orange shoes. I just ordered Sula an orange and white skirt.

Its hard to be in Texas. I cant wait UT anymore. People think I am talking about Texas!