I'm 22-weeks today!
Inching closer and closer to that 6-month mark.
Here's a view from the front. 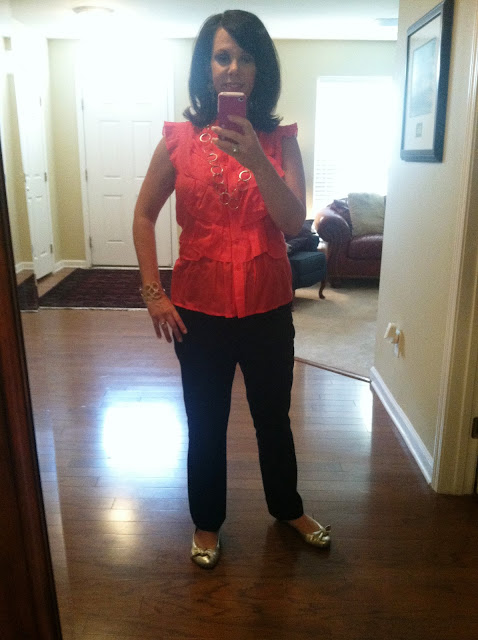 And, a few shots from the side.

I know it's hard to tell a whole lot in these pictures because of the ruffles and nature of them, but I'll try and get some better ones this weekend to share with you all.

Knock on wood, but this week has been much better for me.
I'm 'feeling' better as of right now.
That terrible pain I was experiencing last week hasn't been here even though that same area(right rib area and back) does ache every now and then.
I'm convinced it was my body/ligaments stretching.
I started prenatal yoga this past Friday and it seemed to help TREMENDOUSLY!
I'm going again tonight and will keep it up until the very end.
(or, at least try)
Because of that I'm going to scale my walking down to 3x's a week and do yoga 2x's.

All the other pregnant bloggers give details each week of what they're missing, food cravings, weight gain etc. 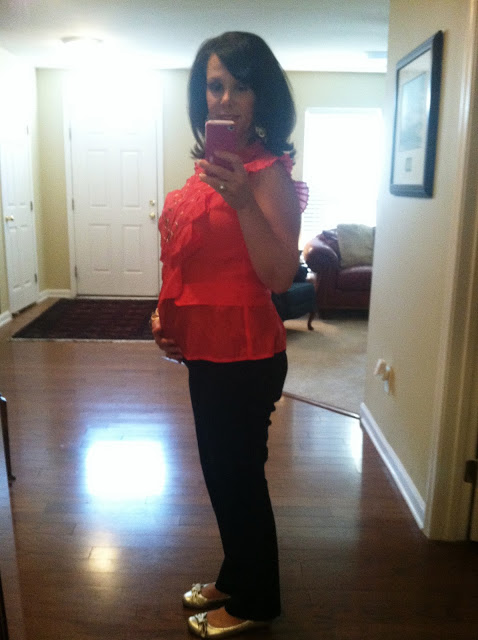 I won't be as formal as them but I will give you a few highlights.

I'm not sure I've gained any weight in the past 2-weeks.

I've really modified my diet and done away with eating desserts, macaroni and cheese and other things high in fat.

Truth be told, I didn't allow myself to eat that stuff before I got pregnant and was just doing it because it was fun.

Not so much anymore.

Time to keep it real and get back to my normal eating habits, which I have done.﻿

So, when I have gotten on the scale it looks the same, maybe a pound less.

Maternity clothes: the black pants you see in this picture? Wear.them.all.the.time.to.work

I told Brad yesterday that I need to buy a couple of other pairs of pants this week/weekend, because it's getting redic. 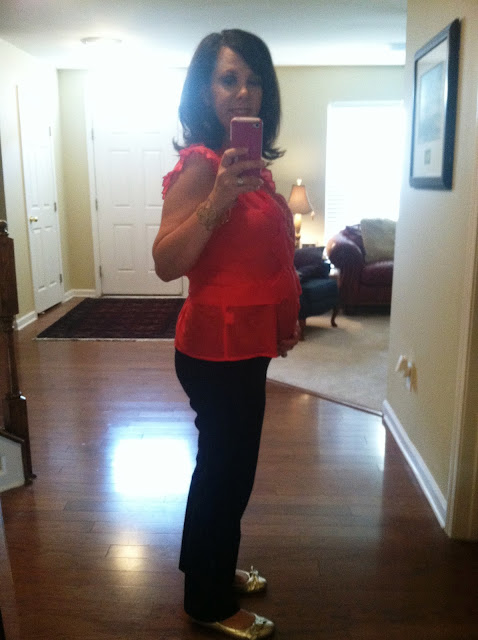 What I'm missing?
Probably a little chardonnay, but after all we've been through I don't think about it much.﻿
Cravings?
Not really anything.

We got a LOT accomplished this past weekend on the baby front.
We bought a dresser/changing table off Craigslist that Brad will be refinishing and started talking about closet organizers as well.
This weekend we'll do some of the same, then next week I leave for Arkansas where my cousins and Aunts are hosting our first baby shower!!
I'll also be hosting a wedding shower for my cousin who is getting married in October.
It will be a BUSY weekend!!!

Until next time!
Posted by Dee Stephens at Wednesday, August 01, 2012

Ok lady. It is hard to tell there is a baby in there in those pictures! You look great!!!!

You look super tiny from the front!!!

You look fantastic! Cant even tell really :) love the shirt. Good for you cutting back on the "naughty" foods :)

You look super adorable. Glad that you are feeling better. 2nd tri is awesome!

you look so great! BTW- is that your Indian rug in the background??? I'm starting to get nervous about having ours cleaned after what you mentioned about the cleaning...

You look fabulous and good for you on watching your food intake. After the first few months it's good to get back to normal diet.

You look beautiful, Dee! Looking forward to seeing you in Hot Springs!

You look great! And your outfit in these pictures is very pretty! So glad you're having a better week, this week!

You are gorgeous! I like your outfit! I was a big fan of the old navy maternity black pants for work. I just didn't want to invest a ton, so they worked. They also have good tanks, but so does target! I can't wait to see the nursery! I know it is going to be adorable.

KatiePerk said...
This comment has been removed by the author.
Wednesday, August 01, 2012

Yeah for showers! You look so good pregnant!

Go to ebay for maternity. Seriously. I had the cutest maternity clothes ever and a lot of the very high end pieces came from ebay. Seven maternity jeans, etc.
I swear working out makes the delivery SO much easier.

Very impressed with your eating! I can hardly stay away from things like sweets & macaroni and cheese now, and I'm not pregnant, ha! You look adorable--can't even tell you're pregnant from the front, it's amazing!

Girl, you are looking great!! Take good care of yourself, and continue to keep us posted. :) So excited for you!

Ok, glad you found me through Claire's blog. I adore that girl. I noticed we are in the same industry. I am TV commercial producer!!! And we love beagles...rather, I am obsessed with them! Glad to have found your blog too!

You are so super cute! You look great!