Revealing our Baby News to our Parents

As I mentioned yesterday, I'm going to share a few of the special moments we've had since we found out we were pregnant back in late March.
I've kept a private journal for myself and this entry is from that.
Here's what I wrote just a few days after the Easter reveal to our parents.
==============================================
It's still very early along in this pregnancy but I think because of everything we've been through we're ready to shout it to the world.
(Or, at least I am)
I have probably shared with too many people but I can't help it.
Knowing that we were going to be with both sets of parents on Easter weekend I decided we should share our big news with them too.
Brad on the other hand?
Totally against the idea.
He felt like it was too early and going to jinx us.
I felt like it was going to be obvious since I wouldn't be indulging in wine and some of my favorite cheeses(that of course, had been bought).
I'm not a good liar, and I finally convinced Brad it was the right thing to do.

At first I thought about all sorts of fun ways to do a reveal.
Then, I decided maybe it wasn't the thing to do but quickly changed my mind.
From the very beginning I knew I wanted to do something with a plant and about growing and life growing inside of me.
I was having a hard time putting my thoughts on paper.
I finally asked my friend Patra(I Do Declare)and took what she suggested along with some of my own ideas and made it happen.
When we first got into town Friday afternoon everyone was there except for my Dad.
Of course he was out running errands.
So, for an entire hour I hung out with my brother, his fiancee, my Mom and in-laws counting the minutes until Dad would get home.
When he did I told them Brad and I had a gift for them.
We made them all stand together and read the cards. 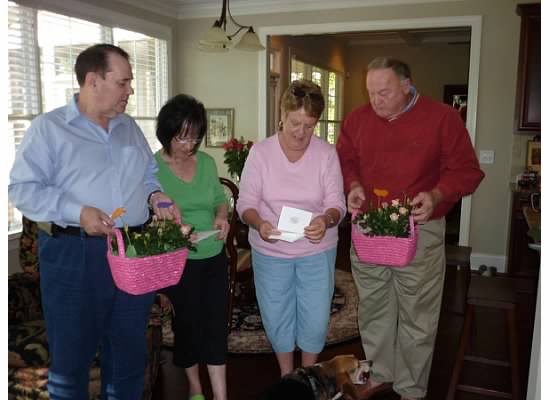 My MIL told me afterwards that she knew something was up because I was standing there with a camera and the whole thing seemed fishy.
So, of course she went straight to the bottom of the card and saw the word 'baby'.
Check out the look on her face. 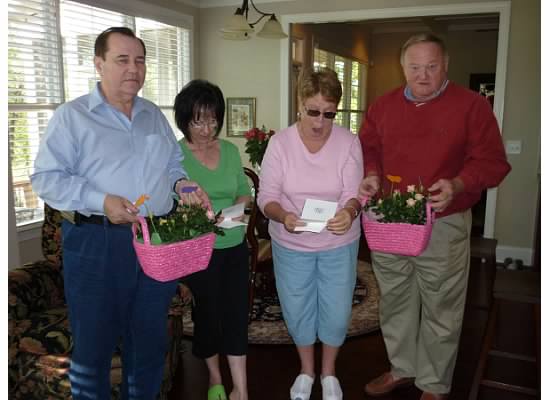 Needless to say.
Everyone was overjoyed!!!!
These pictures were taken right after. 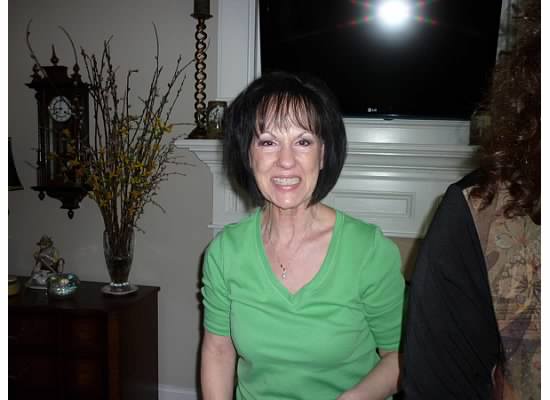 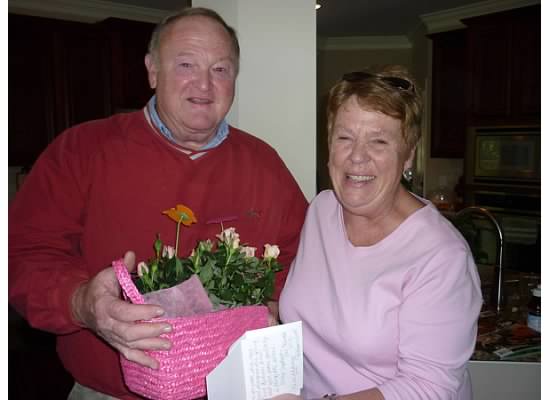 I didn't get a picture of my brother and his girlfriend but they were equally excited! 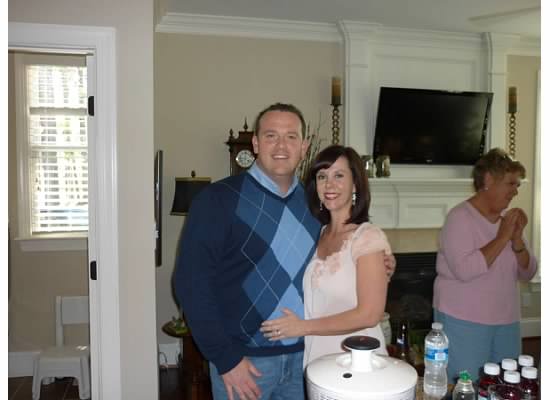 My brother then took pictures of us with our parents.
The excitement was UNREAL! 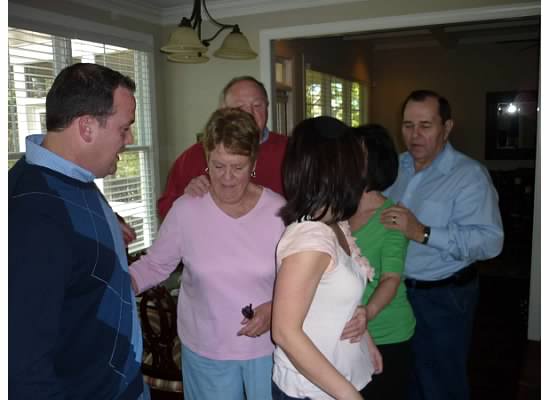 Definitely a day to remember! 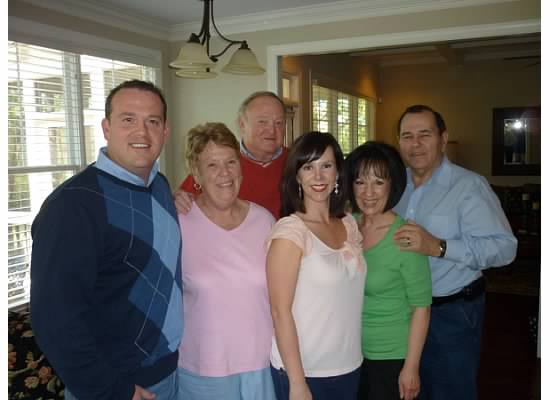 Both Moms both plan on planting their roses in the yard and of course, keeping the note card. 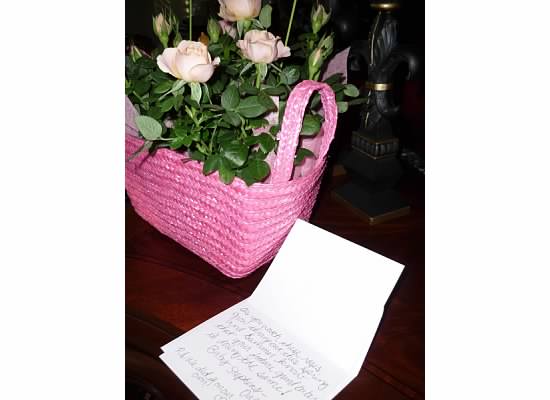 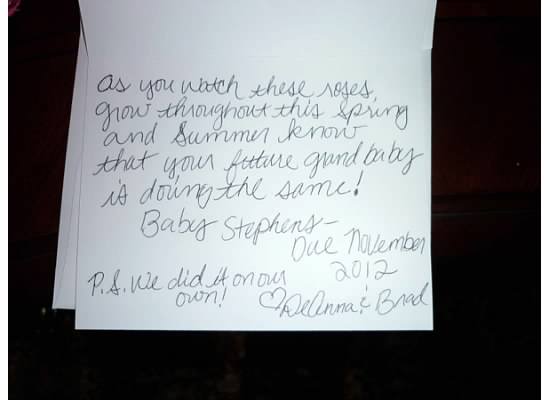 We told all of them to keep their lips sealed for several more weeks.
We haven't told Brad's brother and his wife and children but plan on doing so next time we see them in person.
My MIL thinks we should find a cute way to reveal it to them as well.
HMMMM...﻿
6-weeks and 4-days today. The baby is the size of a blueberry!
===========================
Of course our due date changed after this reveal.
We told them our news BEFORE we ever even heard the heartbeat and had an ultrasound.
Kinda risky.
When we went to the doctor a week later we found out that the baby was actually measuring at 6 weeks 6 days instead of almost 8-weeks like we thought.
That's why our due date in December instead of November like written on the note.
Posted by Dee Stephens at Thursday, May 31, 2012

This was such a sweet post! I'm so happy for you, Dee! Your MIL looked so excited! And the plant idea was great! Can't wait to hear more! Congrats!

I cried. Yep. I'm a big 'ole sap! I'm just so insanely thrilled for you and know how much you and your family deserve this. The note you wrote is what got me all choked up... what a darling, sentimental and unique idea!

I love how you told your parents!!! I found out the week before Christmas that I was pregnant and knew there was no way I'd be able to keep the secret during the holidays we told our immediate families even though we had yet to hear the heartbeat as well. I waited until after all the gifts were opened on Christmas morning and handed everyone a personalized card that said "Santa brought you another gift this year... Baby B is due in August!"

My mom replied with "Oh my god!" lol, she was in shock but so happy. It was a great reveal even though it was so early. We did the same thing for my in-laws when we saw them a few days after Christmas.

I'm so excited for you! I hope you are feeling well!

The "PS" literally brought tears to my eyes. I LOVE how yall revealed the news. So sweet!

Love the looks on your parents faces. Love how you told them too.

You are seriously going to make me cry with these posts. I am soooo incredibly happy for you and Brad!

Andi of My Beautiful Adventures said...

I love that you documented this special moment! What a beautiful surprise for them!!! CONGRATS!

This is the cutest post ever...so happy for you and your family! xx

I LOVE THE idea and the notes!! How could you keep such a secret from your own parents??! hehe. I told my mom FIRST. THEN, I made her not tell my dad for a few weeks (he is around a TON of people daily and would blabber it) and he was PISSSEDDDD when we told him and he found out my mom had known. I felt super bad, but Sure enough he ended up telling his secretary before we wanted it "out" ugh. OH man, I remember agaonizing over cheeses In the beginning . ha! I cant wait to follow your journey :)

Love this! Such a great idea.

Such a moving way to tell them. I love the rose bush. How wonderful.

I'm so very excited for you.

I love the picture of the dads, just kind of standing their holding the baskets letting the moms deal with business - SO cute!

How perfect! I get more excited for you each day!

What a great moment for y'all. I am just so happy for you and excited everytime I see a pregnancy post.

Congratulations! This is a very special time for you. Enjoy every minute of it. You will make wonderful parents.

Oh this is precious! I can't wait to post about telling our parents! My mother in law totally guessed it as well because I was holding the camera... dang it :)
When are you due? (this is my first time to your blog) I'm due Dec 16!

What a GREAT way to reveal. I love the note. So excited for you. After losing 2 pregnancies, myself, I can't even explain the joy I have now that Lyla is here. Wishing you a happy and healthy pregnancy!