Before getting married and then having a baby I was quite the social butterfly.
Not to say that I'm not now, it's just that I don't get invited to as many events as I use to.

That could be for many reasons, one of the biggest being, that I'm not in television news anymore. Instead I work in corporate television producing internal messages and training videos.

But, back in the day I went to charity events, political events, you name it, if I was invited I went.

Well, last night I had a glimpse back into my 'former' life being invited to an event at The Charlotte City Club for the Former NFL Players Orgnanization and the Kiwanis Club.

My former colleague from Fox Charlotte invited me.
Alexis and I go way back. 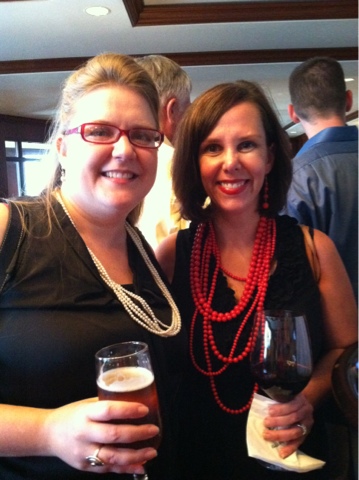 The event was a fundraiser for charities helping children with childhood cancer and the place was packed!! 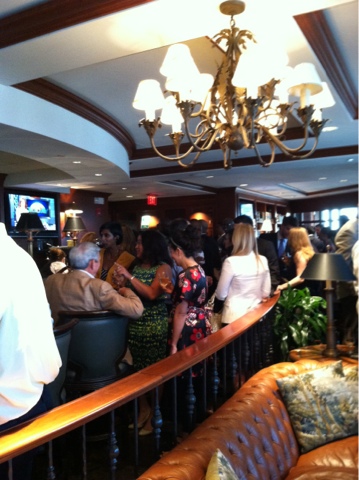 The bartenders were former NFL players. It was so fun to see just how many different people live in Charlotte that never necessarily played for the Panthers.

And, it was fun and amazing to see just how many teams some of these guys played for! 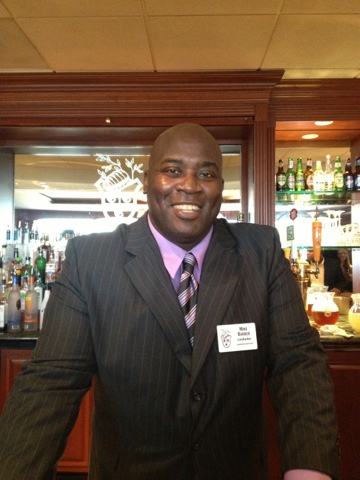 There were several players there from the Panthers team that traveled to the Super Bowl.
Colin told me that the year that they went was actually his rookie year! 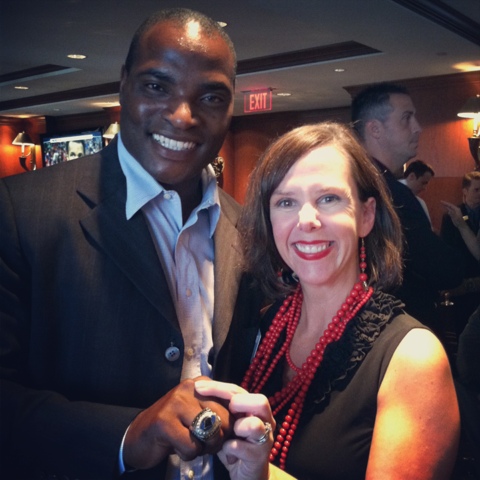 The highlight of the night was getting to see this guy.

I worked with him for YEARS at Fox and he was always available for a last minute interview or to fill in on the set. He was a TRUE life saver!

I had not seen him in 8-years. It was fun to share with him that I had gotten married and had a baby.

The entire night brought back so many memories and back to a place in my life that has long set sail. 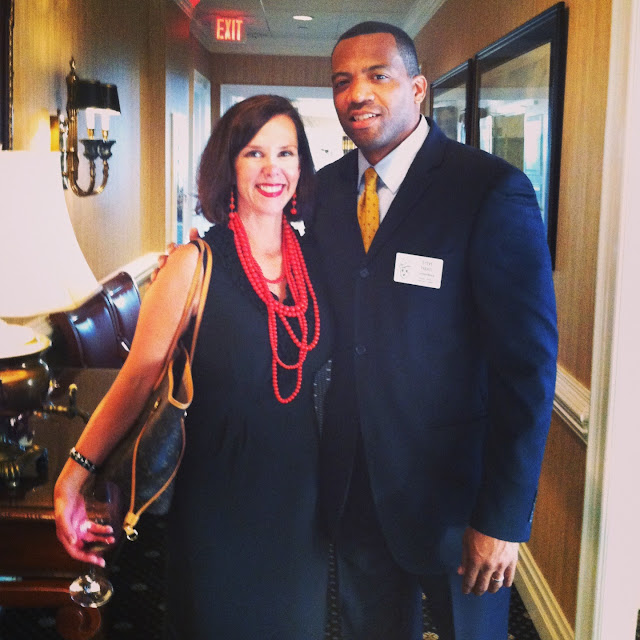 Would I give up my time with Shelby, Brad and Buddy to do this every night?
NO!!!!

But, I have to say it was nice to get out and have a little 'Mommy night out' and catch up with old friends and colleagues.
Thanks to Alexis for inviting me!!

You do look great. Love the dress and lots of beads. Glad you enjoyed your old school night out!

You look great and what a fun night!

I'm so glad you got a much-deserved mama night out! Looking hot!

You look absolutely stunning!! Especially in the last pic. Just gorgeous. I tell you what killed me social life and going out after work-getting two dogs!! The guilt of leaving them alone after a day of work.

I love you hiding your wine glass in that last pic. Ha

What a neat event for a great cause! Glad you got to catch up with some people - who is the guy with a ring? Sorry to say, I am not a football fan so I have no idea!

Look at that ring..wow! You look amazing, and I love the necklace. Sounds like a great night, and I bet it felt good to get out and do something just for you. I know we all enjoy nights like that. :)

You are seriously looking so hot! I'm a little jealous of your night, so fun!

What fun! I remember those days of being out on the town, more so before I got married, now with kids forget it! Glad you had such a nice time!

I bet that was fun.