Our almost 13-month old is moving on up in life!
She moved out of the older infant class into the young toddler class today at school and it was a pretty big deal for her Mama.
Daddy acts like it's not that big of deal but deep down I know he KNOWS it is.

We found out 3-weeks ago that she would be moving and they sent us the new guidelines for the class.

* NO bottles
* NO food from home. All menu food from the school cafeteria and they eat at the table with the rest of the kids instead of in high chairs.
* NO sleeping in cribs, but instead on cots during designated nap time.
* 2-playground trips a day.

So, during the Christmas break I made it my mission to try and get her up to speed with the bottle thing along with off formula and onto whole milk.
It was a transition but not as much as I would have thought.
She hasn't had a bottle since Christmas day and she's easing into the whole milk. That part hasn't been easy.

So, as for how today went??
They said she did really well but hasn't figured out her sleep yet.
She plays and plays and plays, then curls up in a corner on a mat and goes to sleep for 30-minutes.
HAAAA!!

They said she loves sitting at the little tables and she's eating like a champ!
They had her in the class half day on Friday and she wasn't a fan of the playground but I'm sure that's because it was cold.
I'm told there won't be anymore time on the playground until it warms up a bit.
Tomorrow the high is 27 with a low of 9 in the morning!!! 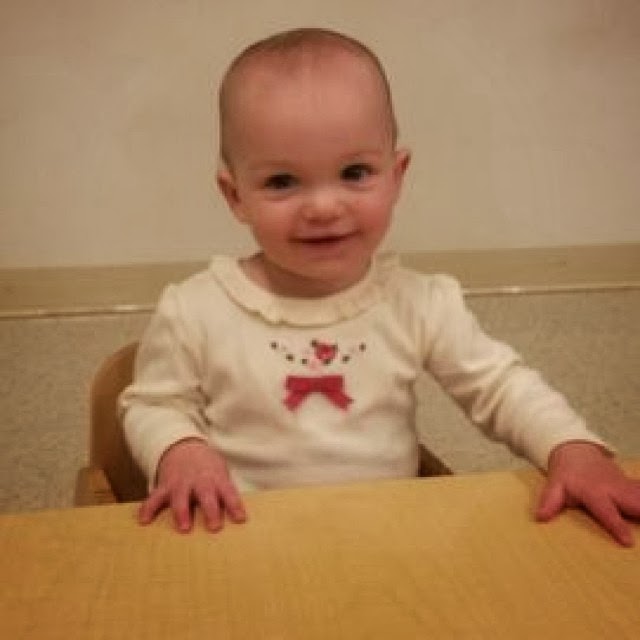 In other news, we're still making the 1st birthday party rounds.
Our neighbor's little boy turned 1 over the weekend.
So fun how there are so many babies around the same age in the hood.
Brad and I truly enjoy hanging with all of them and sharing stories.

This picture is from the party on Saturday.
This is another neighbor's little girl.
How sweet!
:) 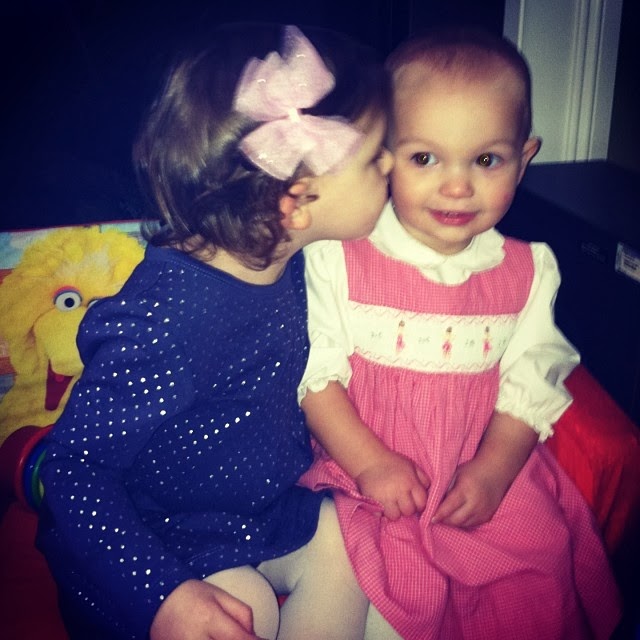 Tomorrow is Brad's 36th birthday.
Nothing major planned since it's going to be so cold, but I'll have a post about it.
Ciao my friends and stay warm!!!
Posted by Dee Stephens at Monday, January 06, 2014

Love Shelby sitting up at a table all by herself. That is a big change!!!!! So nice to not have to send stuff from home, too. Big girl.

Are those dancers in Shelby's dress? I love it!!

No food from home? Are all day cares like that? What's the food they feed them like? Healthy? Orangic?
She is just a baby!!! Can't believe she has moved up.

Big girl!! I never in a million years thought JR would sleep on a nap mat at school but they got him to do it the very first day. I was blown away!!

And that meal looks delicious! Filing that one away to make soon!

Drew moves up Friday and we're transitioning her right now. I wasn't ready for Trent's transition, but I am ready for Drew's. They all do so amazing in the group setting - just follow the crowd I think. We're working on the bottle to sippy transition right now. Drew HATED bottles so I thought it'd be super easy to transition her, but she isn't so great. Part of the problem is the only time she gets bottles is at daycare so it's not something we can really work on at home, but she does get all her water in sippy cups... We bring all our own food which I like because I don't think they really do the highest quality snacks so I would hate to see what their lunches would be, haha!