One of my favorite things to order during a late night Taco Bell run?
Mexican Pizza...
Made me feel as I was still trying to be healthy, when really I was NOT!

I haven't eaten at Taco Bell in probably 15-years but I do love any type of pizza.
Tonight, Brad and I talked about doing lettuce taco wraps but we had a bunch of whole wheat wraps we recently bought at Sam's so we decided on ground turkey tacos.
Then, at the last minute, while I was putting Shelby to bed Brad decided to make turkey burger Mexican pizza/flat breads.

I don't have detailed photos because I was up feeding Shelbs but here's the after.
It's basically a whole wheat tortilla that's toasted in a toaster oven until it's slightly firm.
Pull out put on foil
*Add ground turkey or beef(that's seasoned with taco spices)
*top with spinach, tomato, mozzarella, and put your toaster oven or regular oven on bake and watch until cheese is melted.
Remove and add a dollop of sour cream.
We were out of our fresh cilantro, but that would have made it even better.
Here's the finished product. 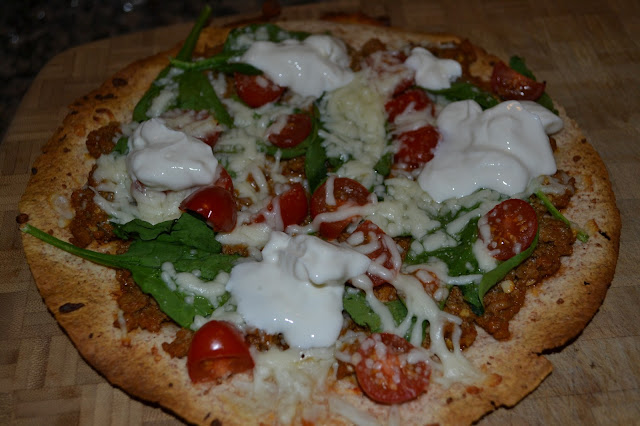 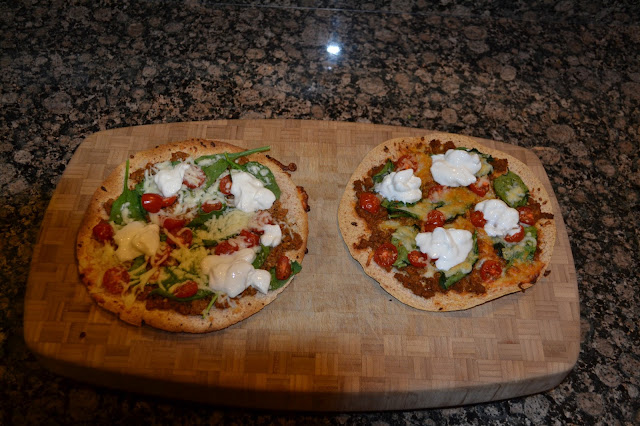 It was delish and we plan on using our leftover ingredients for tommorrow night's dinner because we LOVE pizza on a Friday night!!

It was legal to drink in Louisianna at 18 back in our day? Cause it wasn't in Tennessee...

I WANT THIS. looks so good!

This looks good. It wasn't legal in NC in my day either, and I'm older than you. :) Good for your college days.

The drinking age changed in NC in 1986. I was just a mere Junior in High School, but boy did we have plenty of friends that could buy us beer. Oh wait, I think I could buy my own at the store in the hood.
I know you aren't older than me (so I had to Google that law in LA).
I want to make that pizza..what a great idea, Brad!