I'm now a full week into being back at work and we're still trying to figure out what our 'new normal' is.
I think it's going to take time but we're off to a decent start of it from what I can tell.
It doesn't hurt that Miss Shelby, who turned 3-months old yesterday, is still sleeping 12-hours a night(except for last night when she woke up at 1:30am and proceeded to eat 8-ounces!) 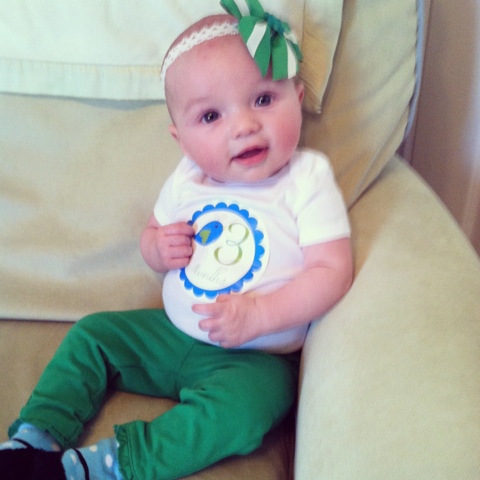 I thought I would share with all of you what our new routine is as of right now.
As I've mentioned on here before, Brad and I both work in Uptown Charlotte and used to commute together because of gas and parking costs, but we've decided it's just not going to work with us doing that anymore.
I don't want Shelby to be the last kid picked up from school and Brad can't leave work until after 5pm.
I always hated that and REFUSE to have it be that way with her.
So, here you go.

6am or 6:10am - I wake up and get ready. This involves makeup, brushing hair and getting dressed.
(We pack our lunches the night before, make her bottles for school, I shower and wash my hair(on the days I wash it)the night before along with laying out Shelby's school clothes.)

7am - On the road to work
I'm in by 7:30am about the time Brad is dropping Shelby off at school. He wakes her up and gets her dressed starting at 7am.

4:30pm - I leave work to pick up Shelby.
Shelby is in a school near our house. There was no guarantee that we were going to get her into a school/daycare here in Uptown and I couldn't wait until the last minute to know so we enrolled here in a wonderful place 2 miles from our house.
This works out really good because they're able to do her first feeding and her 4:30pm(she eats every 3-hours). If she was having to commute with us we would have to wake up a lot earlier and feed her.

5pm - Arrive home to feed Buddy, change clothes and put Shelby in the stroller to walk Buddy.
This is where I'm still trying to figure things out.
Now that the time has changed I'm attempting to do a 40-minute power walk with Shelby in the BOB. So far she REALLY enjoys being outside and it gives her a chance to catnap.  This is probably going to be my extent of the gym during the week unless I want to go after dinner around 8pm.
Probably not going to happen.

6PM - Brad arrives home and he plays with Shelby while I attempt to throw together some sort of dinner.
I'm trying to keep dinners simple at this point. A meat, veggie and always a salad.

(here's a picture of Brad spending time outside with Shelby after he got home. I put the little hat on her because it was sunny.) 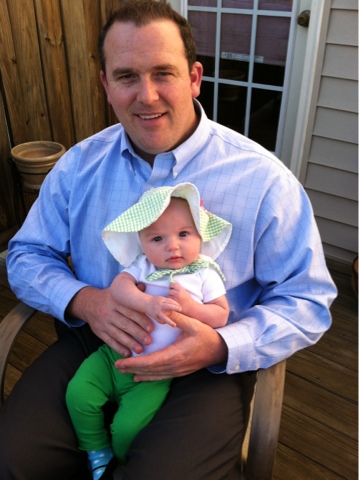 7PM - Start getting Shelby ready for bed.
Bath, bottle and book. She's generally down by 7:30pm. 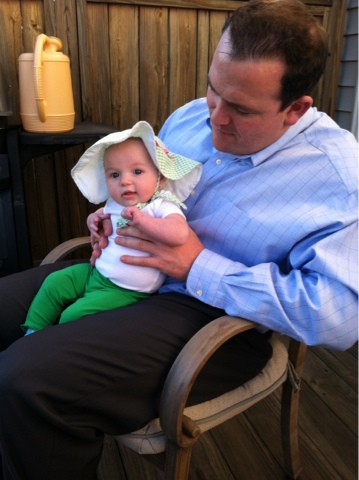 From there the intent will be for Brad and I to spend adult time together watching TV, catching up, etc.
Really though, we've been prepping for the next day to start it all over again.
I hope to master all of this sooner rather than later but we shall see.
There are some nights that I wish I didn't have to shower and blow dry my hair the night before but then remember that I would have to get up at 5:30am and risk the blow dryer waking Shelby up before her 7am wake time.
So, there you have it.
Boring?
Probably.
But, something I thought I would share.
Do any of you Moms have tips or suggestions for me to streamline things??!!
If so, email or comment here!!
Posted by Dee Stephens at Wednesday, March 13, 2013

You are doing a great job Dee! Hate to give advise because I think that everybody is different. I would like to share with you though, one thing that works really well for us. I try to stay on top of things---cleaning, cooking, etc. I found that when I procastinate, things just gets worst, which stresses me out, which in turn makes it harder for me to focus on stuff. Maybe it's the OCD in me.

Best of luck and y'all will be fine!

You're doing great. I can't think of one thing to hellp streamline. Wait,, can you put in gymtime at lunch or are you cutting out lunch to leaveearly?

You sound like you've got it under control. All that and still time to write and visit other blogs--you rock!
Happy Wednesday,
Laurie
Lulu and Daisy

You've totally got it down. Nearly, every night when I don't want to shower or wash bottles or whatever it is that needs to be done for the next day I have to give myself a talking to that it'll just throw my whole day off starting the morning. For me, I can't sit on the couch and relax or I will never get up and the next thing you know I've fallen asleep on the couch and I drag my butt to bed. It is VERY monotonous when they eat every three hours and the third hour always sneaks up on you. We tried to go 4...but it wasn't having it.
I can't stop staring at Shelby. Seriously, she's a doll. Makes me want a girl....;)

I don't know how moms with kids work out and work. SO much to do. I know Mermaid gets up at like 5 am for boot camp. I don't think I could do that! SOO early!

It does get easier!! Y'all are doing great!!

Sounds like you are doing a great job! I just recently started taking my showers at night. I hate having to do it and blow drying my hair, but I am getting up at 5:20 in the morning as is so that we can do some exercise and get ready before Lyla wakes around 7:15. We started doing Insanity, but I have an inflamed joint in my foot, so I just ordered an exercise bike and will be doing that while Bobby does Insanity. I go to sleep around 9:30, so I'm still getting a good 7-8 hours of sleep for myself. That's key.

You're doing great!!! Prepping the night before is key to having things run smoothly the next day. The only thing I've started trying to do is WHILE I'm cooking dinner for everyone, I also work on the boys lunches for the next day. That way, once dinner is over..I'm finished in the kitchen. And we can do baths,books bedtime and then Trey and I can hang out. Unless I'm doing laundry. Or cleaning the house. Or taking a shower. Or....who am I kidding? There's not a whole lot of relaxation going on during the weeknights :)

But seriously....y'all are doing awesome! And Shelby is just precious. Love her sweet smile!

Hi Dee! Your schedule is VERY similar to mine. One thing I do on the weekends is meal plan, grocery shop and cook at least one bigger thing that we turn into dinner one or two nights during the week. I also have each nights (Quick and easy to make) dinner planned out. I also try to pick out my work outfits each night (or over the weekend if I'm feeling extra organized).

Wow, amazing! Your are so organized! I am So impressed with how you both manage to do it all!!

Hi Dee. I found your blog through Kate (Set This Circus Down). We are friends in real life and I was reading her blog when your post title on her side bar caught my attention. I just had our first baby,a boy, 6 weeks ago. I will be going back to work starting the first week of April and am a little anxious to figure out what our new normal will be. I am interested in what your feeding schedule and how much you feed at each feeding. I am working on getting our little guy to sleep through the night but haven't quite found the right combination for his feedings in relation to frequency and amount. I know every baby is different but I like hearing what works and doesn't work for others too!
Your daughter is adorable! Congratulations!!!

Sounds like yall have a good schedule that works for yall. She is absolutely precious!

It really does sound like you are doing an outstanding job. Everyone's tips are great.

12 hours?? That's AMAZING! And 8 ounces? Wow. Growth spurt?! Life seems so much busier with a baby! No relaxing time when you get home, ha ha! But it sounds like you have an amazing schedule set up!
How often does Shelby nap during the day, and how long are her naps?