Remember back in July when I posted about needing help with creating a gallery wall up our stairwell?
Then a few weeks ago when I had a meltdown trying to accomplish it?
You can read that recap here.
Remember?
When I said I was done, that it wasn't going to happen?
Well, it did.
Thanks to the will of the best husband ever!! 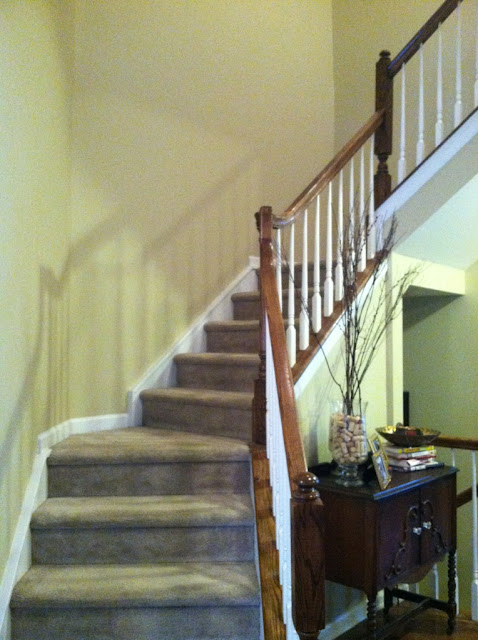 The next morning after I had calmed down he was armed with his hammer and nails and made it happen.
Here you go!! 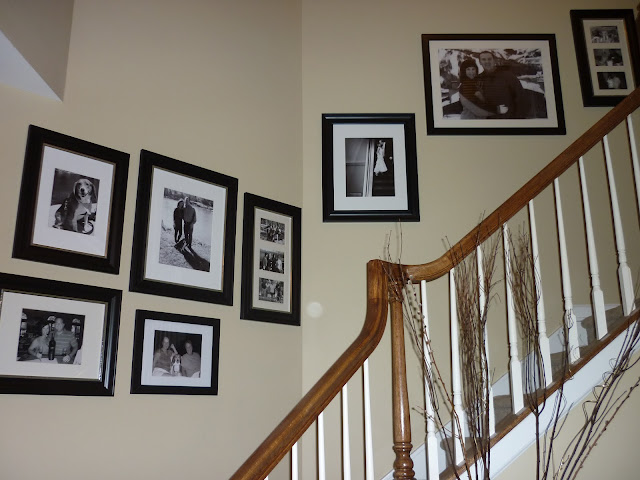 Of course, I plan on adding frames to it over time, but I think it's a GREAT start! 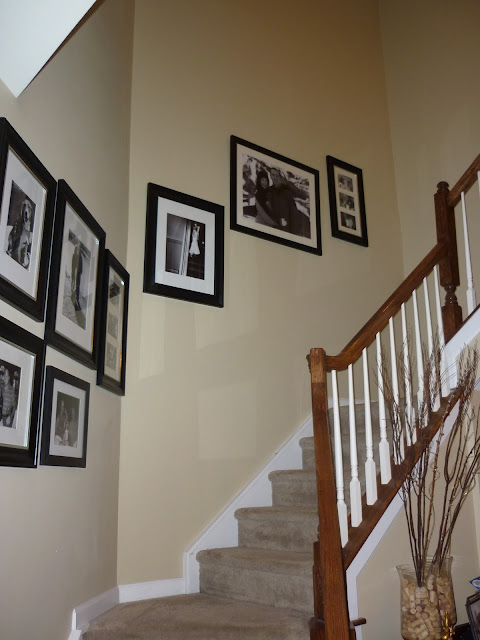 It's heavy with pictures of just us two.
I'm sure I'll get some rude comments about how self-absorbed we are.
BUT..
In my defense, I tried hard not to make that happen but it's harder than you think. 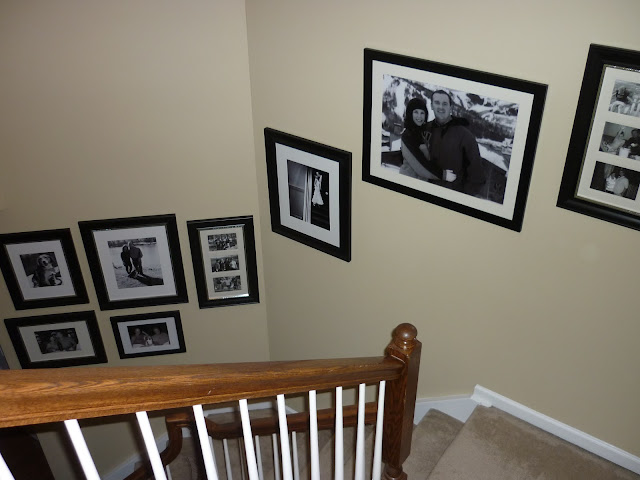 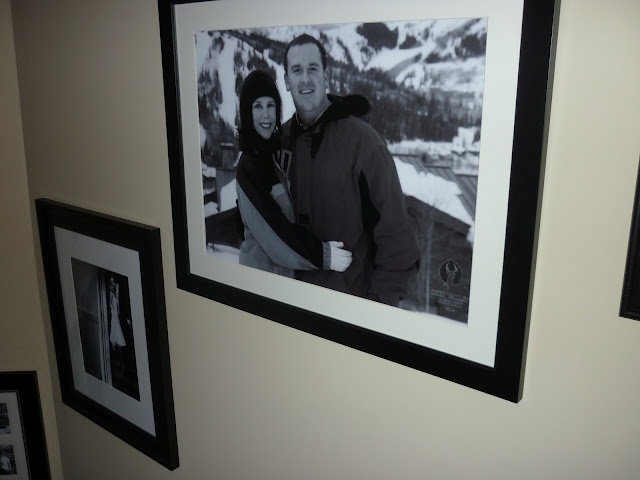 When looking for pictures of family we knew we had to make it even and the fact is, we don't have a lot of pictures of my brother and his 3-kids.
I used the recent ones I have.
So, we resorted to having a big picture of Buddy on the wall along with a few other family pictures. 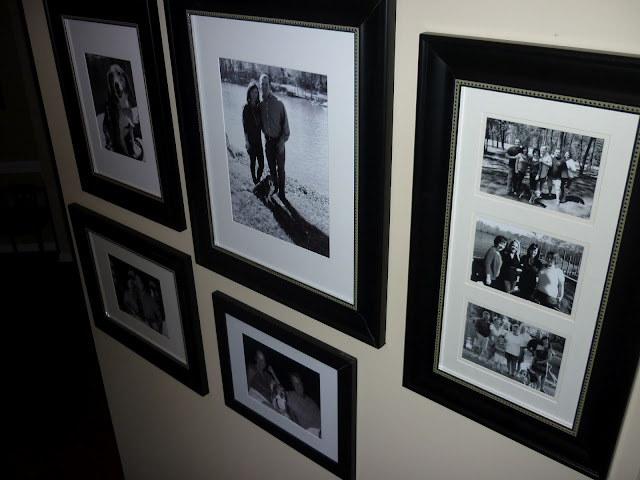 And, of course, we know there will pictures of Shelby in just a few short months!
We have to make room for her!! 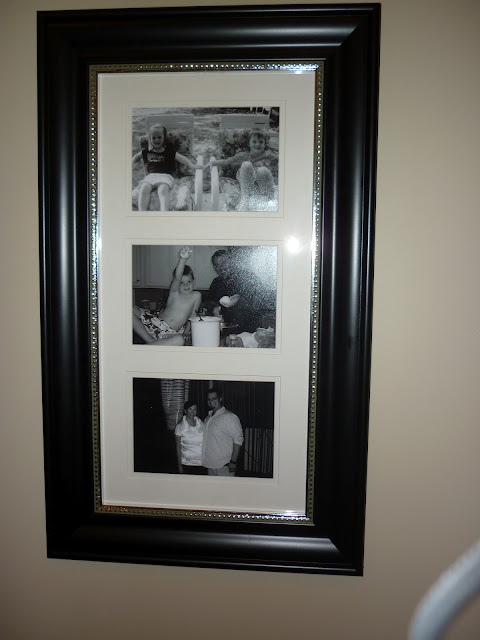 I would still like to put my bridal picture on this wall, but Brad is against it.
It might stay bare.
It all remains to be seen.
No one can see it from downstairs anyway. 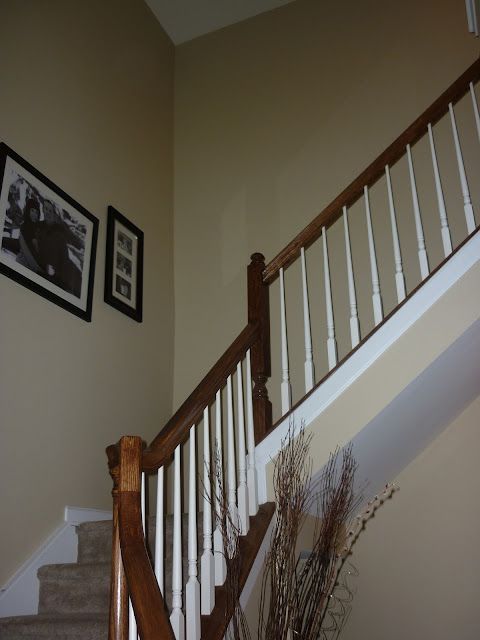 There you have it!
I might have made it harder than what it was but I wanted to make it was tacky looking.
Do you have a gallery wall in your house?
Thoughts?
Posted by Dee Stephens at Monday, September 24, 2012

It looks great! Can't wait to see the addition of baby pictures :)

I mean, who else are you supposed to put pictures of on your wall? Me? Ha

I absolutely love it! It really completes that entire area. Good job to the hubby! :) Next up, adding some cute baby pics to the wall. Can't wait! :)

Love it, Dee! I'm so glad you didn't give up on it. It's a beautiful addition to your home. And there is NOTHING wrong with having mostly pictures of you and your husband. It's just the two of you until Shelby comes, anyway. Brian and I just got our engagement pictures back, and they will be going on our gallery wall for sure! It's nice to finally have frame-worthy photos of the two of us and of course I want to show them off. Nothing wrong with that.

Looks good! And I cant wait to see how the bridal portrait debate ends...hee!

It's your house - you should have pictures of you two and Shelby! I don't think that's self absorbed at all!

That looks SO great!!!! I absolutely love it!! We have so many bare walls in our house. We keep putting it off until we paint all the walls (haven't painted anything since moving in June!) but that seems to be taking forever. I need to get the ball rolling on this project! It really looks fantastic!

It looks great. Love all your pictures and can't wait to see it with Shelby's pictures too!

It looks awesome! I think your husband did a beautiful job and your picture choices are great. It will be fun to see it grow with baby and family pics :)

Lovely!:) We have a mini-gallery, seen in this post: http://heretishietishie.blogspot.com/2011/04/sneak-peak-into-our-home.html

Catching up.....looks like you guys have been busy bees. Excited to see the nursery for Shelby. Love the name too!!

Who cares what people think. Its YOUR house :) We have a phtoto wall. Andrew did it- he wants to add all these silly things to it- well, not silly, it would just take ME time to get the photos. ha. WHy is brad against your bridal photo?

This looks fantastic. Keep going with it. You will love it for years!

I agree with MCW ... your only other option was to keep the fake pictures of the models that come with the frames!