A pretty low-key weekend around here and we enjoyed it!
We were in Charlotte the entire weekend and enjoyed football, food and even a little boat fun despite it already being Fall weather.
~~~~~~~~~~~~~~~~~~~~~~~
The weather was so nice this weekend we ushered it in by having dinner on the back deck.
Shelby had her version of Mexican that night.
She's doing so good eating table food.
I'm so proud! 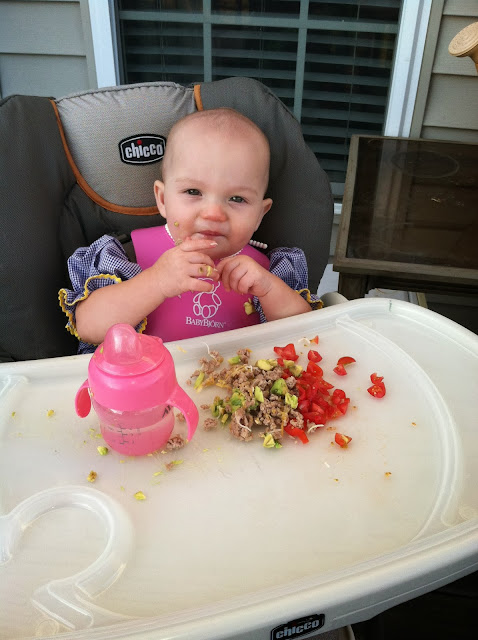 Saturday was game day!!
LSU vs Georgia!!
Big stuff!
It was even the college game of the week on ESPN.
We were dressed in our LSU gear all day!!
It was Shelby's first run in her cheerleader outfit my best friend bought her before she was born. 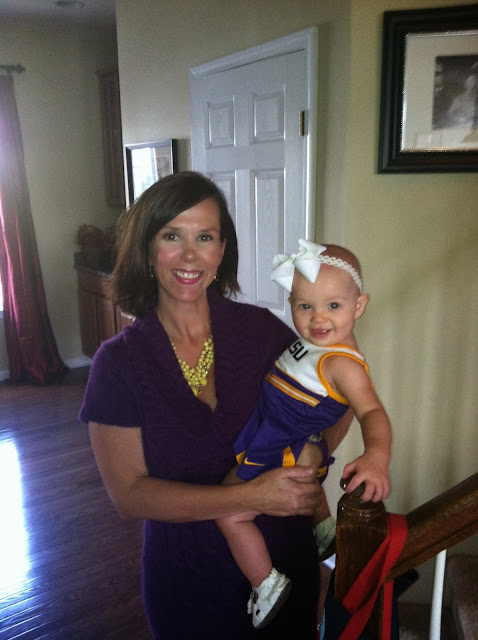 We watched the game with a bunch of our VA Tech Hokie friends since their team played on Thursday night.
A little easier than taking Shelby to a bar to watch with the Alumni Group here in town.
Maybe in a year or two.
I made sausage balls and busted out my Tiger chip and dip bowl the 'Old Brad's'(ex-boyfriend) Mom bought me years ago for Christmas. 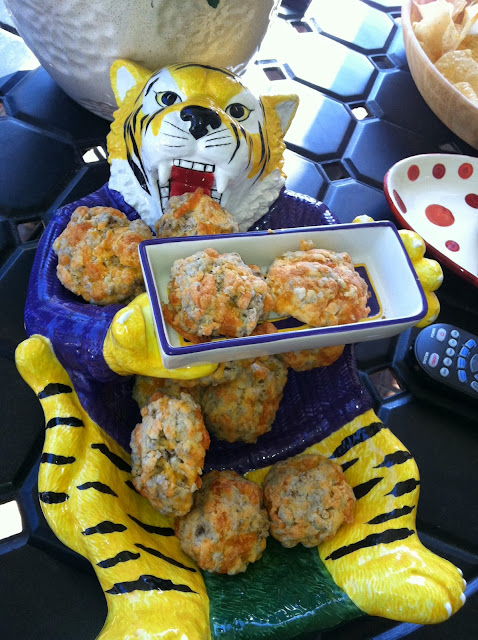 Shelby was a real trooper!
We were out at their house until 9pm because of the game.
She normally goes to bed at 7pm!!

At least there was another baby there to entertain her.
William is 2 and 1/2 months old. 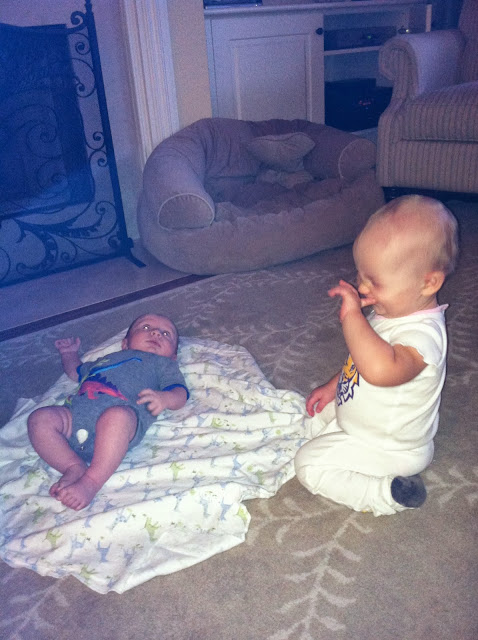 I think she has my personality even though she looks identical to Brad.
She totally loves being the center of attention! 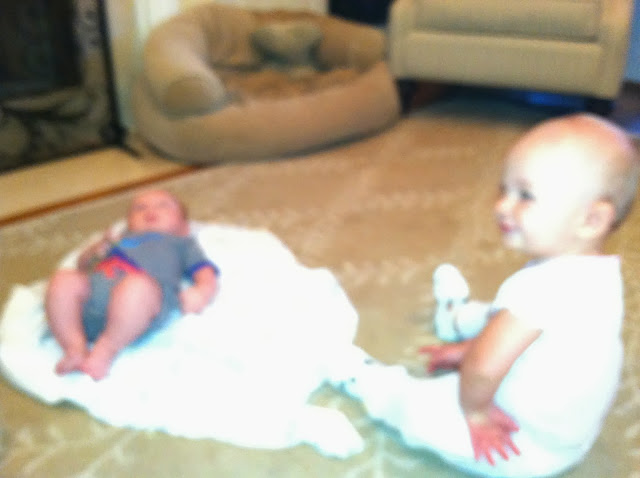 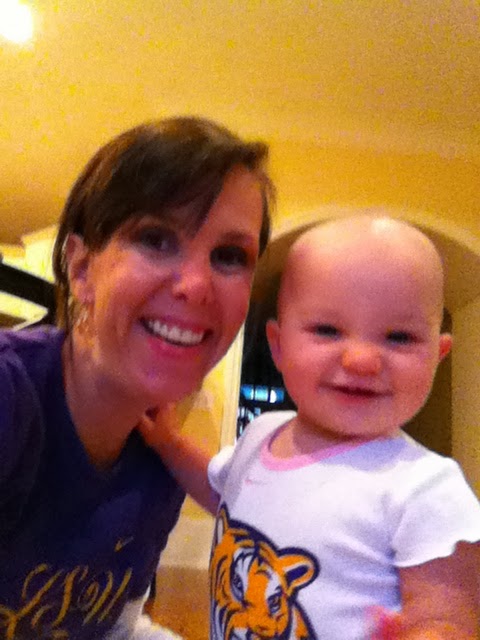 Sunday we went to church for the first time in weeks giving that I was sick, we were out of town, then Shelby was sick last weekend.
Great service as always.

Then our neighbors Keith and Lu invited us to brunch and on their boat.
The weather turned out to be sunny and 78 so it wasn't bathing suit weather but still super nice. 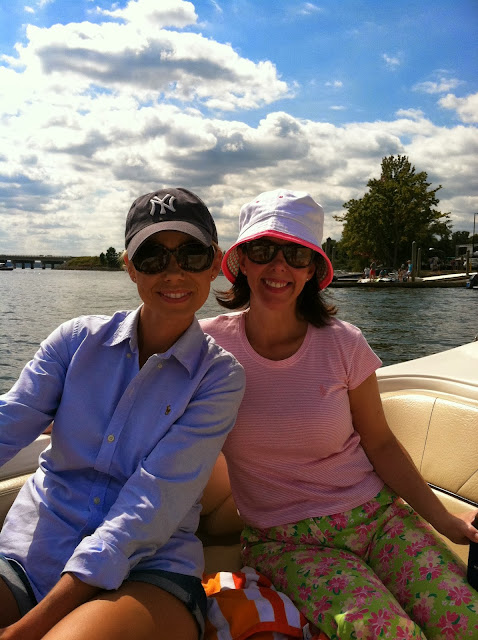 Shelby did the best she has done ever on the boat.
I'm not sure if it was because she wasn't hot or what?? 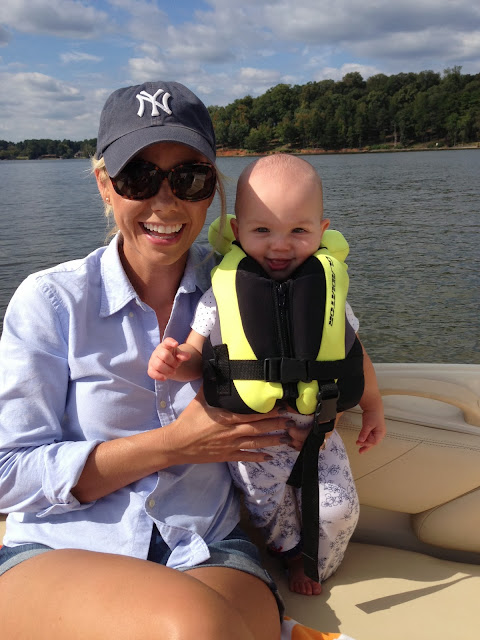 She even got down and was crawling around and standing up on the boat while we were moving.
Granted Keith was driving super slow. 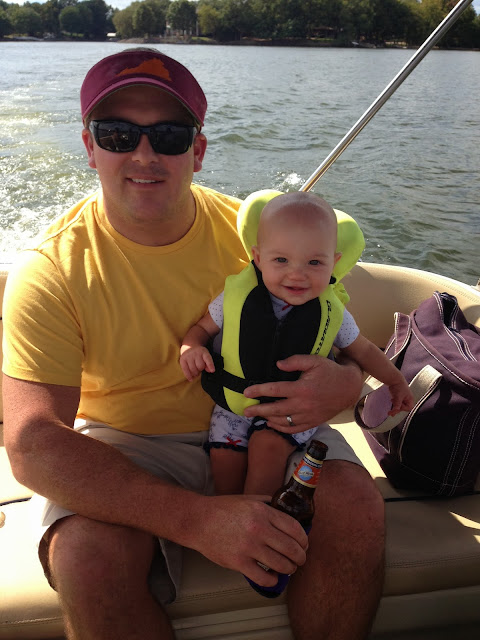 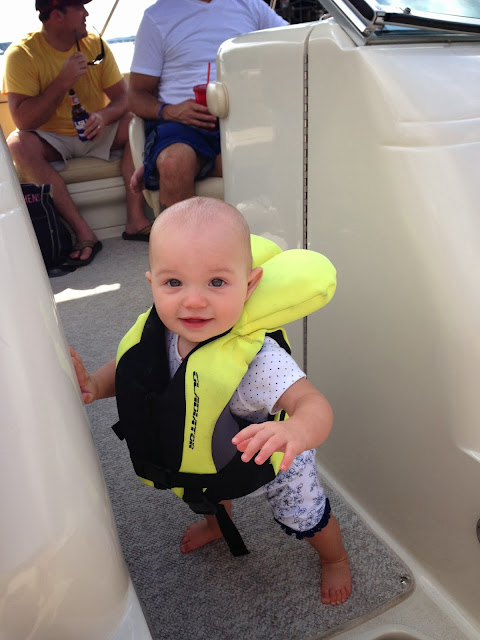 Makes me so happy seeing her love the outdoors.
I want her to appreciate nature and be active her entire life.

We've already scheduled our next camping trip to the mountains in 2-weeks.
I'm hoping the early exposure to all these things makes her love it. 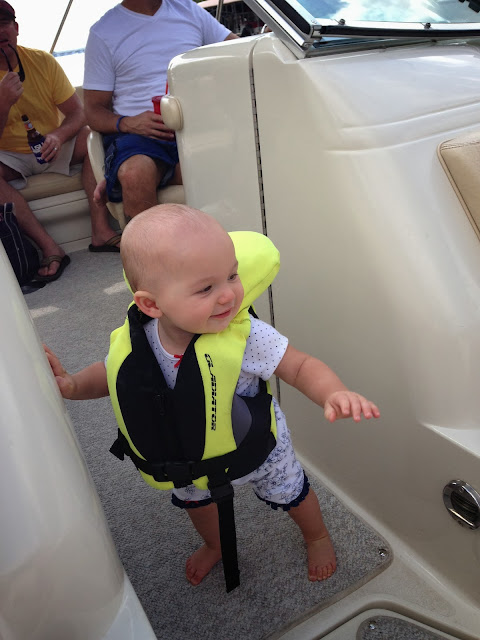 We cooked a great dinner tonight that I should have taken a photo of.
I'm getting better with my meal planning.
Tomorrow night I'm attempting Skinny Taste's spaghetti squash boats with grilled chicken.
Light, different and hopefully delish!!
Happy Sunday!

LSU game was tough. So sad!

I am loving this cooler weather also. It's so perfect for being outside. Shelby looked fab as always, and those sausage balls look soo good.

Yum...sausage rolls. Reminds me of my grandmother :)

that cheerleading outfit! OMG! She looks adorable in it. So happy!

As always she looks precious and so happy! I hope school gets better!!

My cousin dated a guy named Pete and then broke up and married a different Pete. Poor guy was called re-Pete for awhile. Haha

Sounds like you've been busy, lately! Shelby always has the biggest smiles. It's adorable. I especially love that first picture of her on the boat - she looks so happy :)

I'm sure Shelby will love all the nature things y'all do - it's family time, how could she not love it?!

Love her in the cheer uniform! She is sooo cute. I want your sausage ball recipe. I love them and can't find a good one that's not too dry. Are yáll headed to church this weekend? We haven't been in FOREVER and need to get back on it! Shelby doing great on the boat is making me want to try it again with the babies. Maybe this weekend...

Love baby girls in their cheerleader outfits! You inspired me to make those spaghetti squash boats!

I love that you have an "old Brad"...I have an "old Rob" as well. Too funny! Girl, I'm so behind on all things blogging. I just love how Miss Shelby is smiling in each photo. I just want to hold her and love on her..she's so sweet!

Love the LSU outfits!!! I can't wait to get Gia in her cheerleader outfit!!