Shelby's 1st birthday is just a month away!
I'm super excited but unlike a lot of other parents, I'm not trying to make her birthday party to be some sort of frat party - or - party for us.
But, I do want it to be pretty and nice.
~~~~~~~~~~~~~~~~~~~~~
My inspiration for her entire party was based on an outfit one of my business partners at work sent her after she was born.
I was totally floored, especially because I've only met her in person one time!
Is this not just breathtaking?
Like a baby Chanel!
It's from England.
It's a onesie with a skirt and I just love the jacket.
When my Mom and I saw it we both agreed.
First birthday!
But, I knew that meant her party would have to be 'fancy' with threads like this! 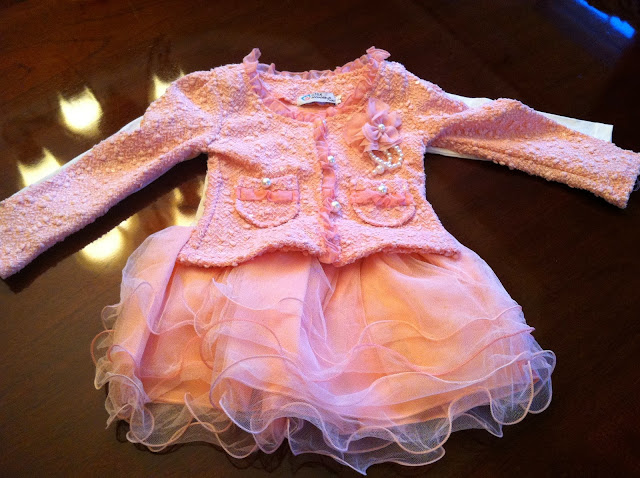 I originally thought some sort of 'tea party' theme but after looking around at ideas I think that type of party is better left for when she's older and she can invite friends and they can all dress up.

During my girl's trip to Baltimore, I asked the girls their opinion and they suggested a Winter Onederland theme.
So, that's the theme now!
It will be on a Sunday afternoon with desserts and drinks.
I'm expecting 20-25 people.
Mostly family and close friends.
No kids from he class or anything because let's be honest.
She has no clue or won't remember. 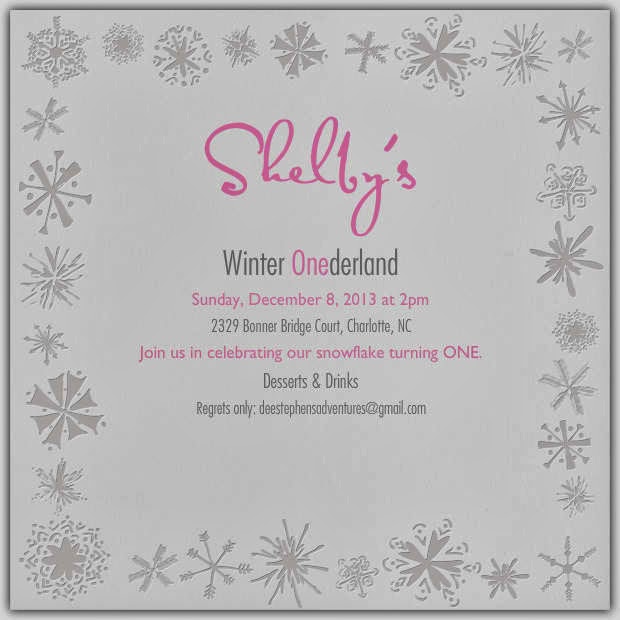 And, as for the look I'm going for?
Something like this.
I plan on doing a tree and everything.
Cupcakes and a simple smash cake. 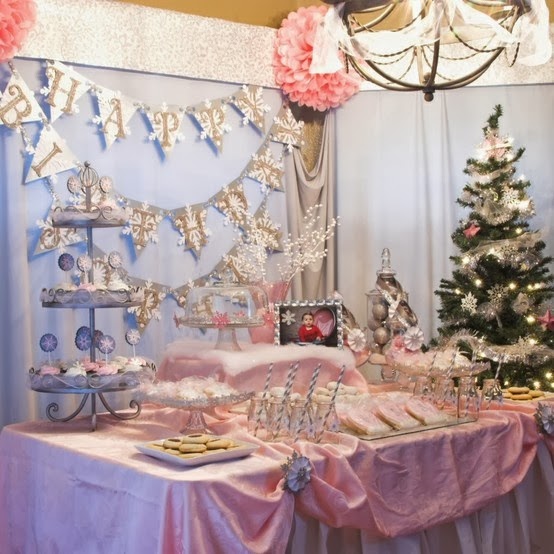 No striped straws either.
I'm a little over them.
Question is -- ideas for white or pinks desserts??
Thoughts??
Tomorrow marks just one-month away!
I need to get busy!
Posted by Dee Stephens at Thursday, November 07, 2013

Can't wait to see pics! I am sure it will be perfect!

I cant believe its been a year already! This party will be so pretty! cant wait to see.

Looks like a beautiful party! Can't wait to see pictures.Have a great weekend.

OMG. I came up with the theme for Drew's first birthday party when she was a week old - Winter Onederland. Too funny! I can't pull up any of the pictures except the last one in Trent's hospital room (stupid slow internet), but it looks like similar colors - pink and silver snowflakes. Not that I created the theme or anything but too funny we have the same one! Can't wait to be able to see the rest of the pictures in this post when I'm out of this room AND especially the party!

What about petit fours? Or even cute iced snowflake cookies? Can't wait to see pics

Just caught up. Love that outfit and I love your ideas for the party. Onederland is darling! And, walking?! So fast!

Girl, I am so behind...Shelby is walking...what? I can't believe it. I still love that theme, and the invites...gorgeous!! I can't wait to how fabulous you make this. Hope all is well. xo

This is beyond perfect! I can't wait to see how it all comes together!! Have fun!

Still thinking about how you can display photos :)

Can't wait to see it all come together!

I love the theme! That outfit is just too cute/

Adorable! Can't wait to see pictures from it.

Super cute idea! LOVE LOVE LOVE the outfit. ADORABLE. We didn't do friends either. We just had family because she won't remember and why spend all the extra money on entertaining/feeding the extra people? I can't wait to see how it turns out. Have you searched Pinterest for food ideas? I'm sure it will all come together perfectly!