If you haven't figured it out by now.. I'm old.
Well, not old..old.. but a child of the 80's and 90's old.
Which means I grew up listening to The Police, Chicago, Daryl Hall and John Oates, and of course..
Van Halen!
So, when I originally heard that Van Halen was going on tour and stopping in Charlotte, I immediatley texted Brad!
His response?
'You're so funny, you love you some Van Halen!'

Brad has seen them twice before and isn't a huge David Lee Roth fan so he opted out of going.
What else was I to do???
Find a blog friend to go!
So, Mrs and Mister was my partner in crime.

Let's get one thing straight before I start though.
I'm generally in bed by 10pm, lights out snoozing so going out on a 'school night' is always a big deal for me, but I rallied.

We arrived at the Arena in Uptown Charlotte only to see a ton of people our age and older, many whom were wearing VH tour shirts from the past. 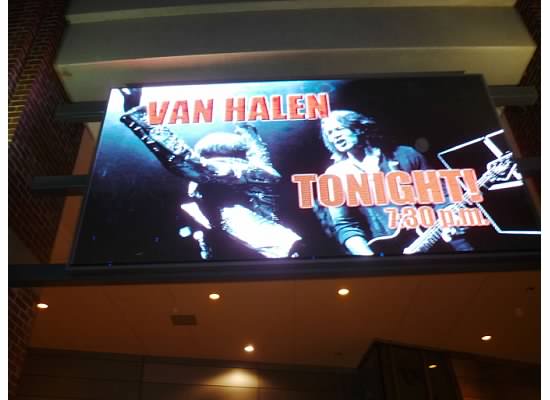 And, buying the new tour shirts that were on sale. 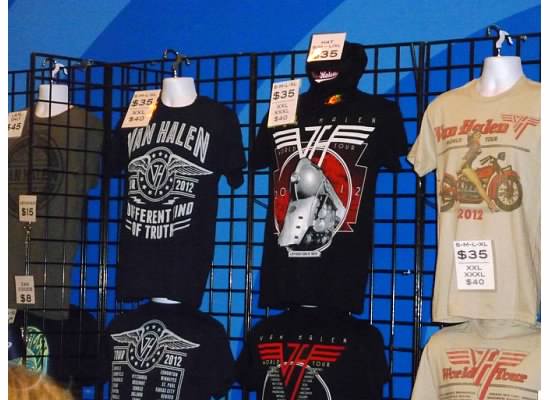 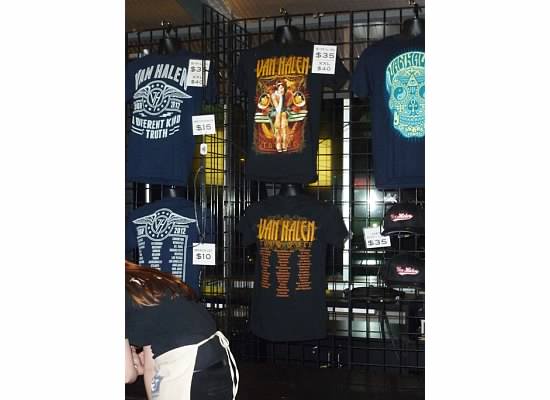 We cheaped out with our seat selection and were in the Upper Level.
(Hey! Concert tickets are expensive these days!) 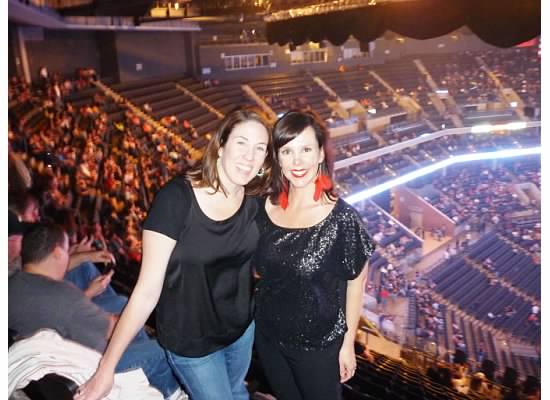 After finding our seats we headed to the concession stand where we saw all kinds of characters including this guy who was trying to imitate David Lee Roth's signature moves. 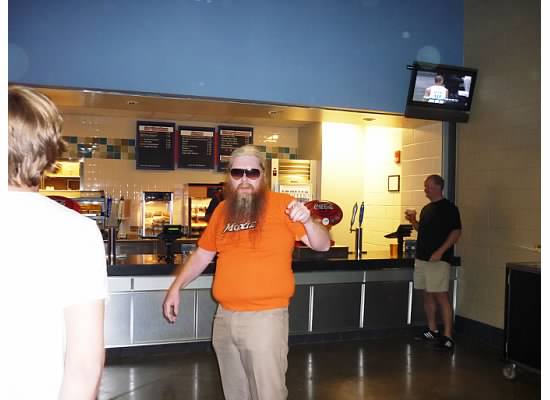 Let's put it this way...
He wasn't as graceful as DLR. 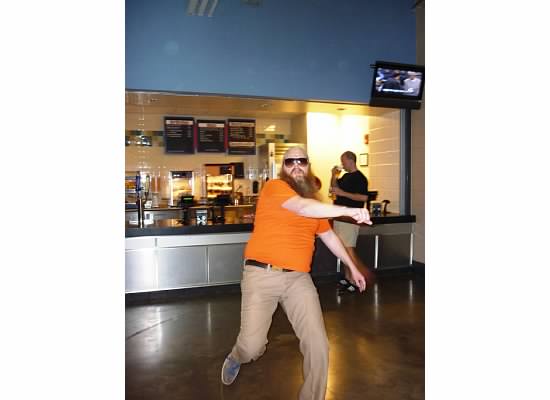 It wasn't just that guy.
Check out this character.
Decked out in his David Lee Roth type cape. 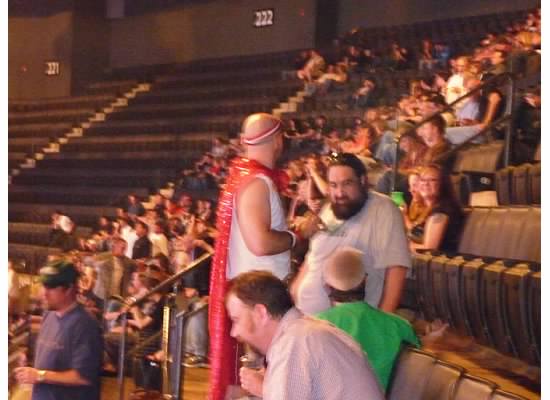 There was an entire arena of these type of people.
Very fun to watch! 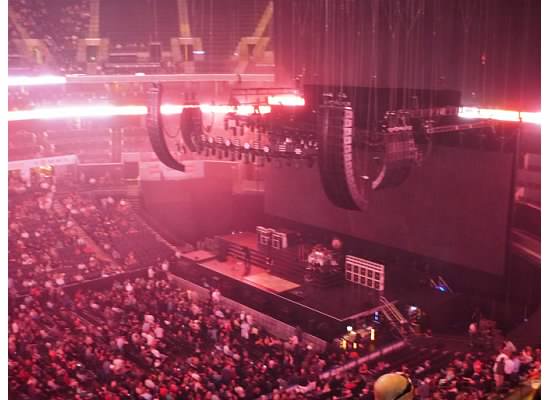 Even this guy, who was literally passed out drunk BEFORE the show even started!
Talk about a light-weight! 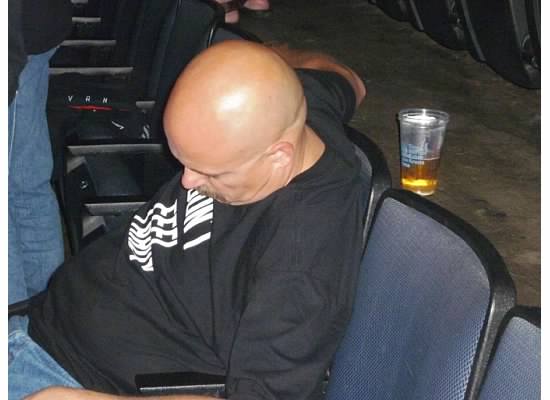 Sara aka Mrs. thought it would be fun to pose with him! 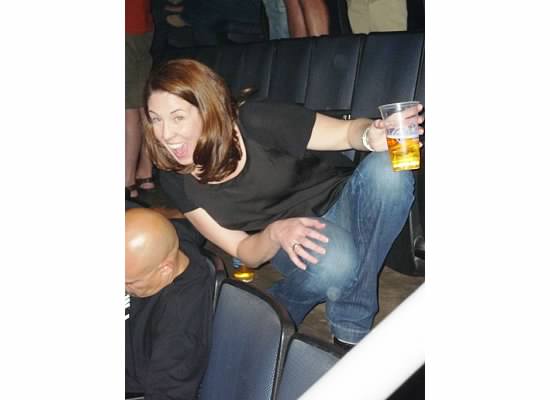 Even his friends were taking pictures of him!
I'm sure he'll never hear the end of that! 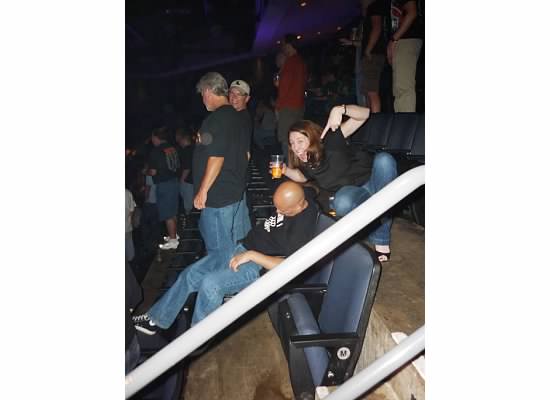 As far as the show itself.
It was good.
They played all their old school hits including 'Running with the Devil', 'Panama', 'Jump',  and there is no question that David Lee Roth is no joke.
For 57-years old the man get around the stage and twirl some mic stands!
I also think Eddie Van Halen can still play like there is no tomorrow and it's super cool that his son Wolfgang is on tour with them, as the bassist. 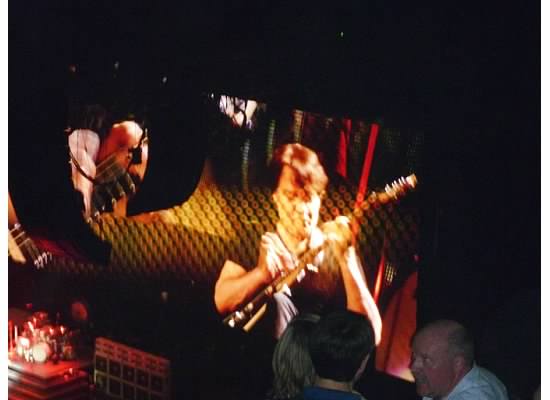 Would the show be good to see if the lead was Sammy Haggar?
SURE!
Not sure that will ever happen though.

Anyway - this was a fun way to kick off the Spring/Summer concert season.
Now I'm ready to see an outdoor show!
Who else is a Van Halen fan?
Child of the 80's and 90's
Posted by Dee Stephens at Thursday, April 26, 2012

I don't think I am a huge VH fan...but, I am also musically challenged! I very rarely go to concerts!

I am going to two country shows this year. Lady A and the Sons of Brothers tour or something like that. Very excited!

Count me in for the Grateful Dead. Not Van Halen.

LOVE the pics of you with the dude passed out!

Sounds like such fun! Brian would love this (I probably would too, actually). The only concert I've been to lately is the U2 concert that they had in PA. I think that was last year. We are going to a concert in July but I can't remember who! For some reason I'm actually thinking its either van halen or pink floyd! Not sure! Anyway, glad you had a fun time! That picture of your friend with the guy is passed out is hilarious!

Too much fun. Every weekend, a crazy mood strikes Ian and he BLASTS "Panama" in and outside of our house (we have speakers on the back patio). I swear, the neighbors are going to call the cops on us soon, and rightly so. He does a mean air-guitar move to the song, too.

He would have LOVED to hear this played live!

I love it. Rocking out to VH! Nothing better! :)

awesome! hope you had a blast! I just saw where they are coming to Knoxville too and tickets are going on sale.

So jealous! They played GSO on Saturday night. Hate I had to miss it. I had seen Van Hagar twice. Looks like so much fun and I, too, love to people watch!

How much fun! I grew up with VH too so would have loved it too! Here's to the beginning of concert season! We start ours next weekend!

Those are some great pictures.

Looks like fun. I would have loved to have gone.

I love it. Rocking out to VH! Nothing better! :)
Vans for Sale

Dennis and I are big Van Halen fans too. I have never seen them in concert but he has many times! Looks like fun! Love me some old school VH!

HA, IT doesnt look very crowded for a concert! Looks like a lot of characters.

I was a Poison fan so its so funny to Bret Michaels now. And I bet the people watching was great. LOVE the picture of the guy passed out. I mean, there comes a time that I think you may be a little too old for that kind of behavior. I guess he was reliving his youth.