I have been trying to get this post up all morning with no luck.
It's not what I had hoped it would be but it will have to do giving issues with Blogger not wanting to post pictures properly.
As I mentioned Friday, SIL and I took niece and nephew to ride the Polar Express in Bryson City, NC this weekend.
Bryson City is in the Western NC mountains near the Smoky Mountain National Park.
In anticipation of our mini-vacay I put together little goody/treat bags for the kids.
Gummies, Polar Express coloring worksheets, crayons, bells and holiday headbands. 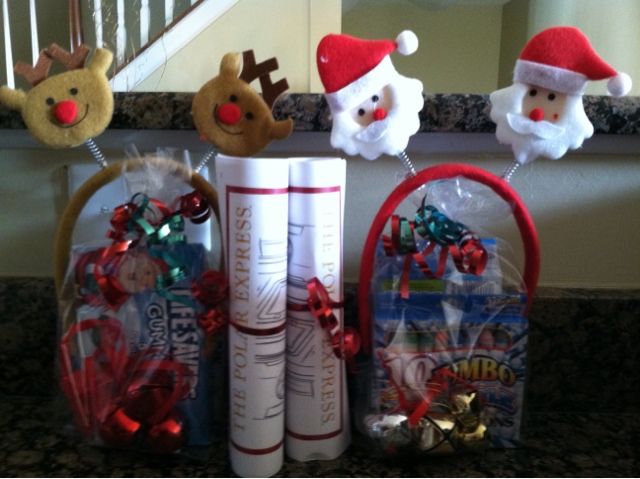 It didn't totally kick in what we were doing﻿ or where we were going until we got to the hotel.
When we walked in they had The Polar Express movie playing in the lobby.
They freaked!
On another note - this was their first hotel stay ever! 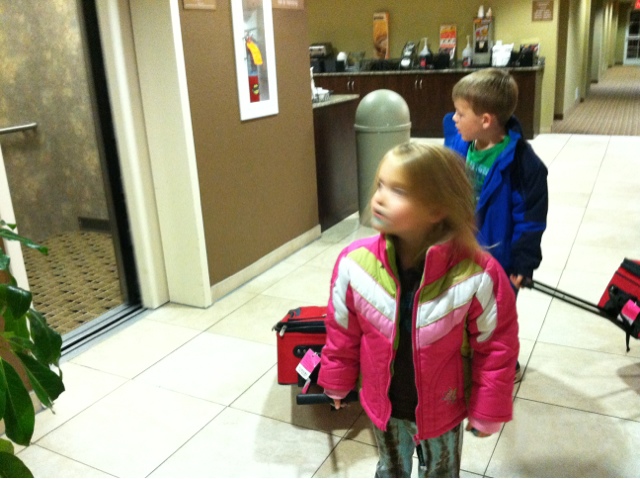 This was when we gave them their treat bags.
Reed is always excited about candy and 'gifts'. 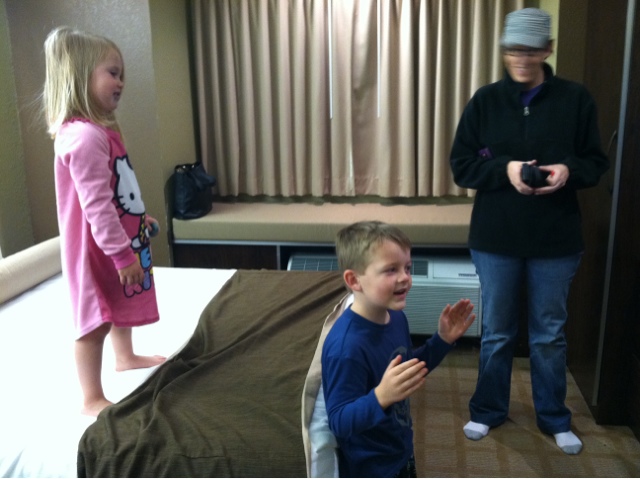 I brought Robyn and I a little 'treat' as well.
A bottle of Biltmore Christmas wine. 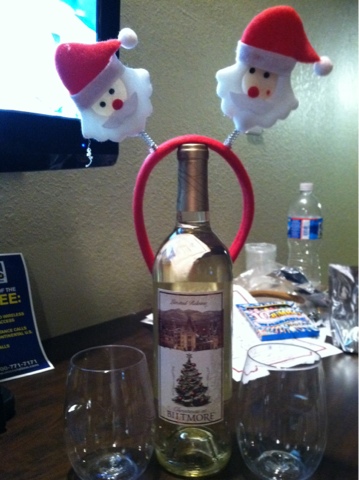 We had a little time to kill the next day before our big train ride so we drove up into the national park.
First time for Robyn and the kiddos.
I had to get their picture in front of the sign. 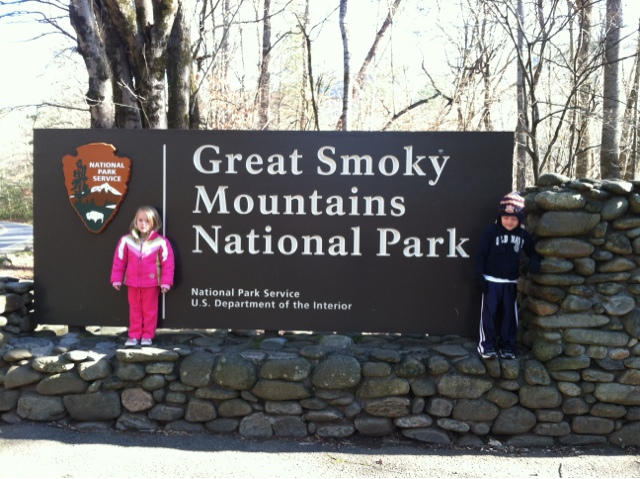 It was chilly up at Newfound Gap where NC meets TN.
There was even snow on the ground. 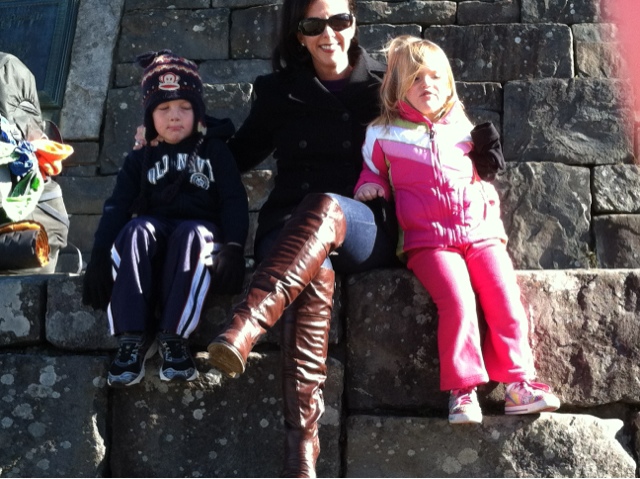 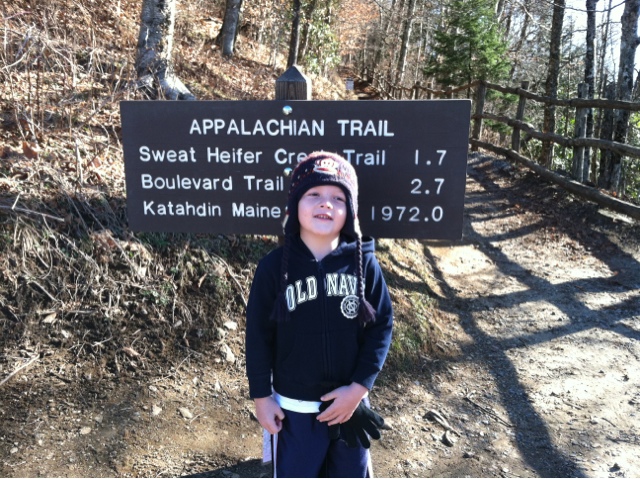 After our drive through the park we headed back into Bryson City to get ready for our ride on The Polar Express! 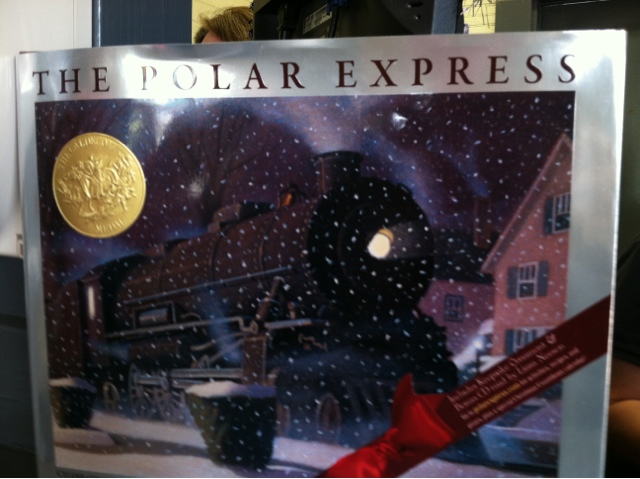 They give all the kiddos golden tickets just like in the movie.
We actually let them carry their own tickets until time to get on the train with the understanding that if they lost them they didn't get on.
I was impressed.
They held them tight and didn't lose them! 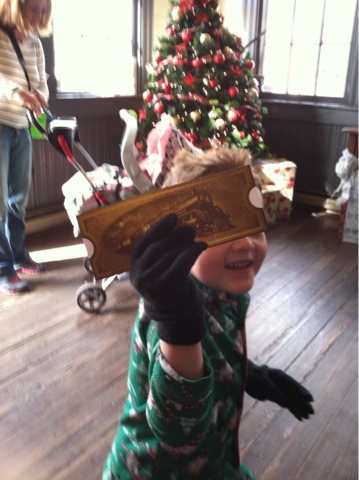 You can see the excitement on Reed's face! 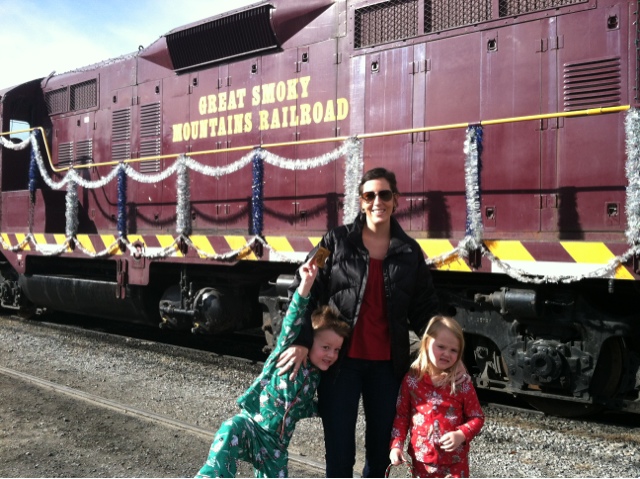 Then we got on the train.
This is where my pictures get out of order and I'm sick of trying to move them around on this post. 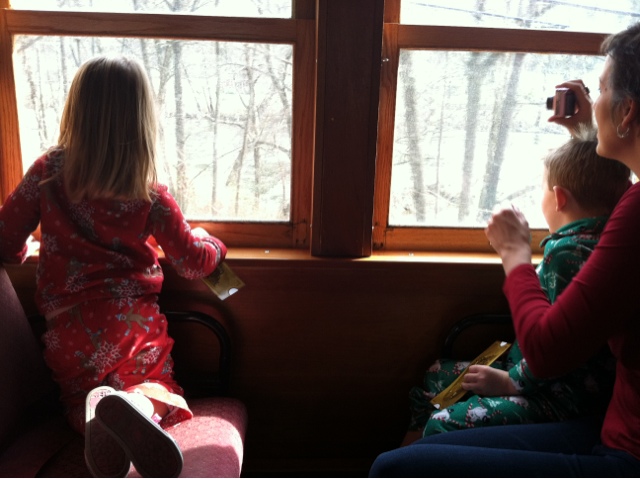 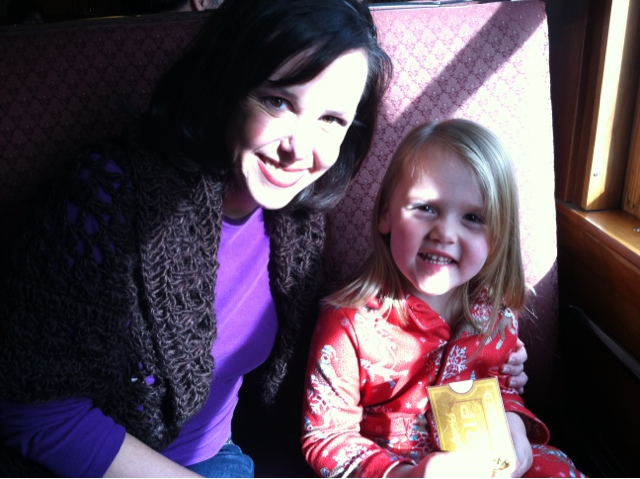 This was when we boarded the train.
It was really cute -- all the people working were in costume and character.
Just like the movie. 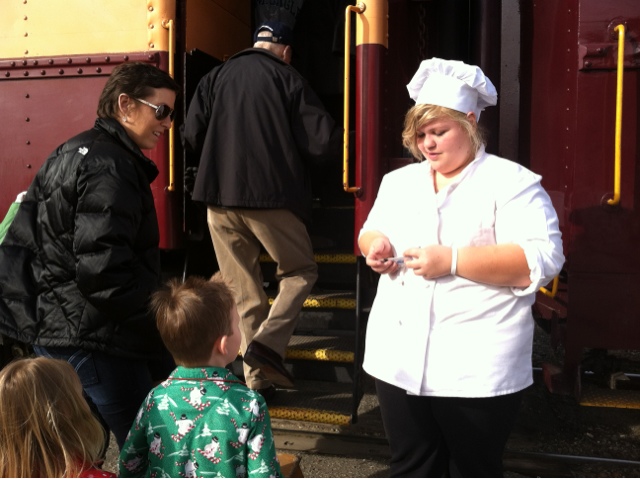 The views were amazing.
Water, mountains, even wildlife and farms along the way. 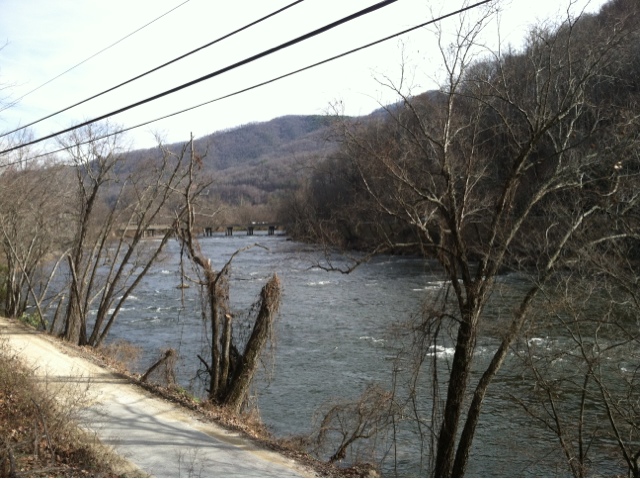 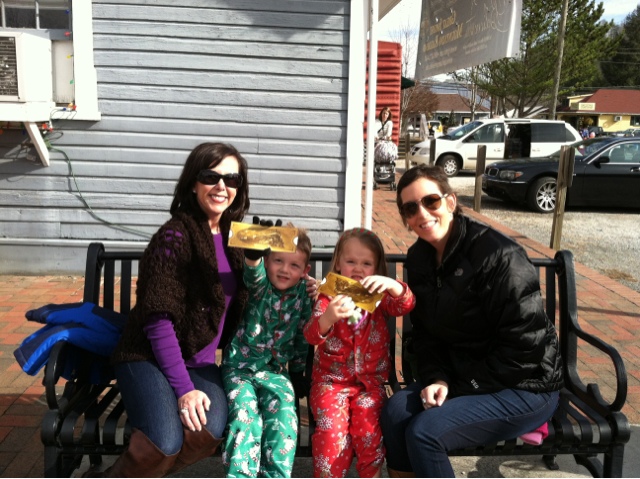 I had pictures of the entire ride but a lot of them wouldn't load.
During the ride, they read the story of The Polar Express, served hot cocoa and cookies and last but not least the boys and girls were greeted by Santa and given a bell. 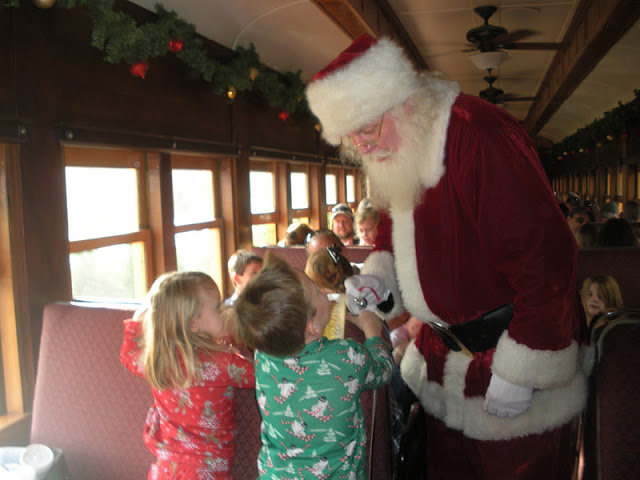 Such a great time and a great way to kick off the holiday season!
If you live in the Carolinas, Southern Virginia,Georgia or TN -- you should consider doing this with your children.
All the kids and even adults really enjoyed it -- Robyn and I even saw adults who wore their pajamas on the train too!
No joke - one family all had matching pj's and they were monogrammed!
I can't ever see myself doing that much less Brad! 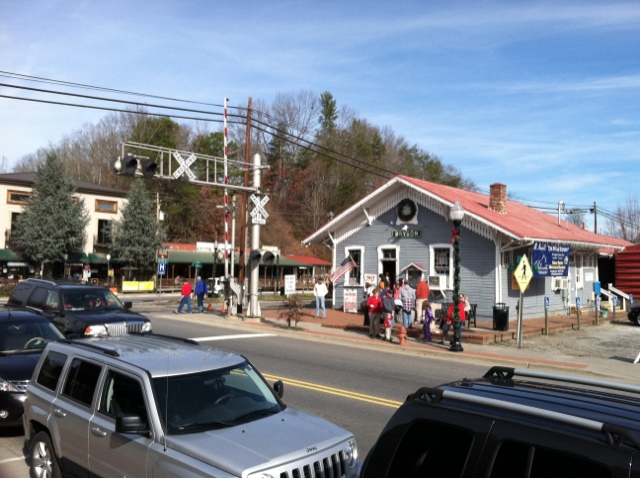 This is my favorite picture from the whole trip!
I showed it to my friend last night who said it should be their Christmas card!
I think so too despite Reed having a crazy hair day! 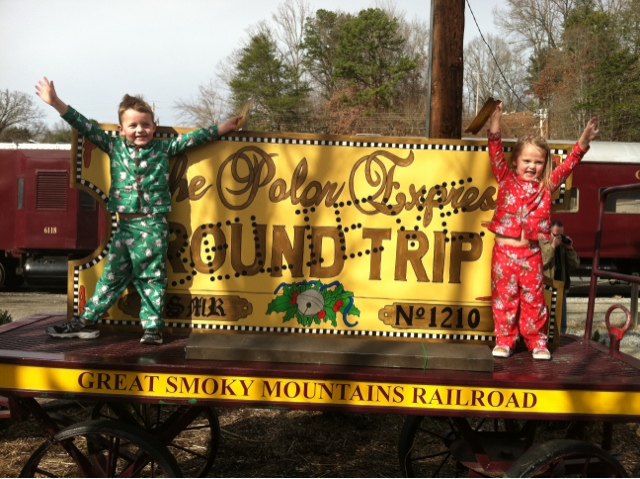 Will we do it next year?
I would be up for it!
Again, click here for more information on how to take your family to ride The Polar Express here in North Carolina!
Posted by Dee Stephens at Monday, December 05, 2011

Super cute! Looks like you all had a blast....their goodie bags are precious!

Looks so much fun! And you're one saucy aunt in those hot boots!

Brad would do the matching PJ thing about as soon as Dennis would - i.e. NEVER!! Glad everyone enjoyed it!

What a fantastic idea!! I've never even heard of it (I mean the real live Polar Express). How cool. And I love the tickets & that they wore jammies. Perfection!!

That would be a brilliant Christmas card photo. That one of you and the kids is pretty good too. Sexy mamma in those boots. Whoot whoot(that was an attempt to type a whistle...)

That is so cute! I hope I live close enough next year so we can go!

I think that even I would love this trip! It looks like so much fun.

OMG! how much fun!!! matching monogrammed pjs?! the fireman would kill me!!!

This was GREAT. I want to do it now with my kids. I grew up near this area, but have never taken this ride even in the winter. You're a GREAT aunt. Fun, Fun.

I actually choked up at the sight of them in their PJ's talking to Santa. So cute!

My Husband would actually love to do this. The Polar Express is his favorite!